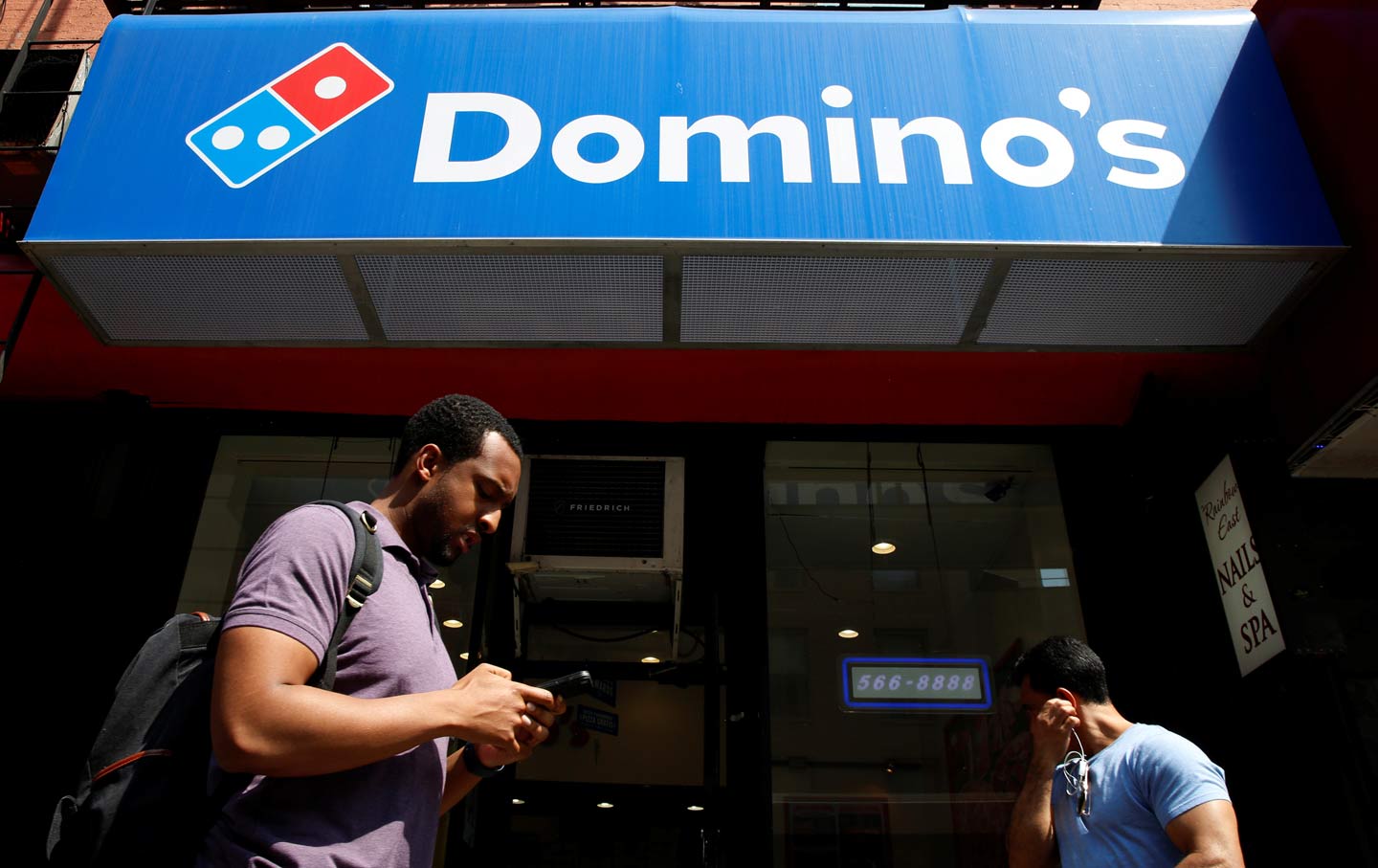 People pass by a Domino’s Pizza restaurant in New York City on May 25, 2016. (Reuters / Brendan McDermid)

It might become the biggest tip in the history of New York pizza: a lawsuit cracking down on one of the country’s fast-food giants, linking its chain-business model to three franchise bosses charged with collectively owing workers more than half a million dollars in stolen wages.

According to a lawsuit filed by New York Attorney General Eric Schneiderman’s office last week, the Domino’s pizza empire and its franchise operators share the blame for years of cheating workers out of tipped wages and overtime pay. Both the parent company and the franchise operators are targeted as joint employers, charged with failing to adhere to wage-and-hour laws for workers. While wage theft is rampant throughout the restaurant business, the lawsuit alleges that the proprietary payroll software system Domino’s uses in its franchises is rigged to encourage cheating workers by design. A multi-year investigation has traced a digital paper trail from each pizza shop straight up to corporate headquarters.

The suit contends that Domino’s PULSE software system registered workers’ job data in a way that facilitated the undercounting of their hourly earnings, including tipped wages and overtime pay. But both the franchisees and the parent company worked in tandem to orchestrate a pattern of wage theft. State investigators contended that Domino’s

allegedly urged franchisees to use payroll reports from [PULSE] even though Domino’s knew for years that PULSE under-calculated gross wages. Domino’s typically made multiple updates to PULSE each year, but decided not to fix the flaws that caused underpayments to workers, deeming it a “low priority.”

The PULSE software served as an administrative database for basic business processes at each Domino’s outlet: “tracking pizza delivery information, maintaining store-specific data such as personnel data or product prices, acting as a timekeeping system in which employees clock in and clock out…tracking employee work tasks continuously, and recording tips.”

The lawsuit also alleges that Domino’s controlled many day-to-day operations in franchisees’ workplaces, including setting the budget and inventory and deciding which managers to hire. The company also regularly directed operators to “discipline employees, report back on that discipline, and terminate employees,” and sent corporate representatives to “inspect stores in person several times a year, often unannounced and without the franchisee present…. Domino’s representatives have given orders directly to employees…with one representative stating bluntly, ‘I’m your boss.’”

By showing how Domino’s “micromanaged” franchisees, the attorney general seeks to establish a line of liability for Domino’s as a joint employer, effectively sharing administrative responsibility with multiple franchisees. Labor advocates have applied the same the legal rationale in the ongoing litigation against McDonald’s before the National Labor Relations Board, which seeks to hold the company liable as a joint employer for retaliating against workers for their labor campaigning. The case could pave the way for unionizing workplaces across different owner-operators.

According to the attorney general’s lawsuit, the company’s business model not only keeps the workforce divided but also pressures managers to actively suppress organizing.

When franchisees report union activity to the company, Domino’s imposes its own view of management-employee relations on its franchisees by providing “union avoidance” literature to the franchisees and has sent Domino’s officials on site to thwart any such organizing campaign.

Operating on the predominant fast-food business model, the lawsuit concludes, “the Three Franchisees are not outliers…rather, they are among the majority of Domino’s franchisees in New York.”

The attorney general has waged several legal challenges against fast-food outlets known for flouting wage-and-hour laws, including McDonald’s and Papa John’s, and has previously settled similar litigation against other Domino’s franchise operators. Presumably, Domino’s may face other lawsuits in the future as a joint employer, brought by individual workers, particularly since the company uses the PULSE system in many franchise outlets.

So the franchise structure is the perfect recipe for diluting accountability across a vast network of operators. But why does Domino’s display so much more “brand integrity” when it comes to boosting revenue but not when complying with wage-and-hour laws? When a multinational corporation can establish monitoring systems to track sales and delivery speeds at every outlet and to ensure that every pizza tastes uniformly generic, all while keeping every workplace union-free—why can’t it ensure each of its shops consistently uphold labor standards?

Domino’s defended its business practices via e-mail, insisting the corporation has worked with the attorney general’s office to try to encourage voluntary compliance among its outlets, while maintaining that “those franchisees are solely responsible for the hiring, firing, and payment of their own employees.” The lawsuit, the company says, threatens to “deprive our independent business owners of the opportunity to make their own employment decisions” and “could impact the viability of the franchise model.”

The model has already proven unviable for Stanley Dalton, who worked as a delivery driver at a Long Island Domino’s for over a decade and recently received some restitution through an earlier lawsuit brought by the attorney general. With the payroll system providing the machinery for skirting wage laws, he says, the management “manipulated everything they could, to get away with whatever they could.”

Dalton mainly blames managers for exploiting workers, but the crime was a conspiratorial effort no matter how you slice it. “Domino’s acts like they don’t know anything and they have no control over their franchises,” he says. “Meanwhile they inspect the stores…every other month, they’re in there, checking the numbers, the quality, the cleanliness, but they never cared if the workers were getting paid minimum wage…. They just wanted to make sure your shirt was tucked in and you had your name tag on.”