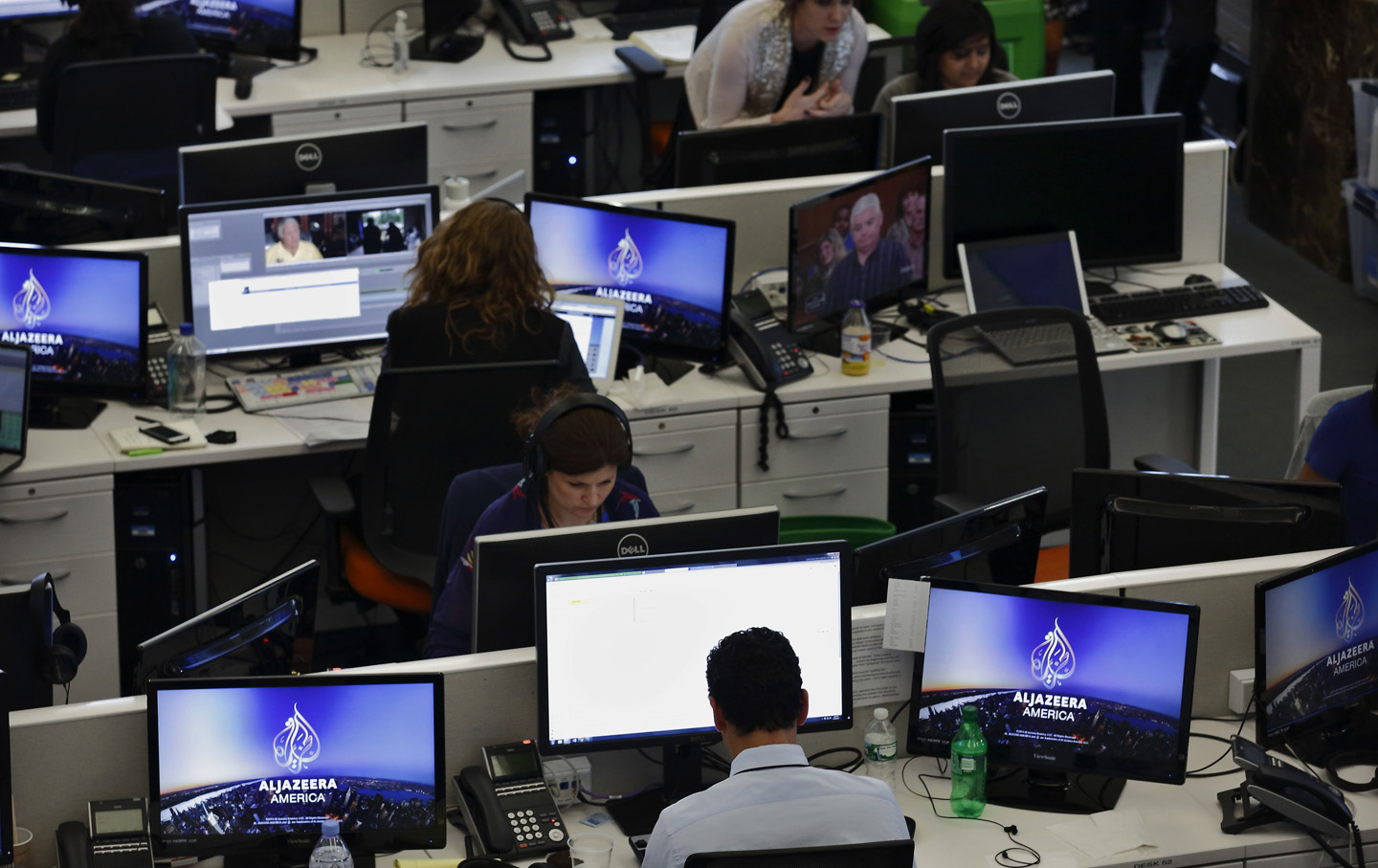 UPDATE—Tuesday, Oct. 6, 2:55 pm: Al Jazeera America digital news staff have officially won their union election, by a vote of 32 to 5, according to today’s announcement of last week’s NLRB vote. AJAM management have agreed to recognize the union, stating that “we respect the decision they have reached through this democratic vote” and “look forward to concluding a collective bargaining agreement.” The management has furthermore agreed not to contest the inclusion of nine additional members of the collective bargaining unit.

This week at Al Jazeera America, the US wing of the Qatar-based media empire, the big story will -be the digital editorial staff’s official union election. Digital staffers started casting their ballots last week, and the votes will be formally tallied on Tuesday.

Media buzz has been hovering over the New York–based digital newsroom since it announced its organizing drive last month. AJAM management has generally refrained from commenting on the unionization effort in detail, however, aside from issuing statements to staff and the press acknowledging the vote and agreeing to respect the process.

Yet if AJAM executives had wanted to keep its labor relations out of the spotlight, it could have just voluntarily recognized the unionization of the approximately 50 digital staffers weeks ago, rather than triggering a formal secret-ballot process under the oversight of the National Labor Relations Board.

For news editor Gregg Levine, the unionization is a done deal; the boss is just catching up. After months of organizing and signing cards to join NewsGuild (which was the initial demonstration of majority support the workers had presented earlier, but which executives did not officially recognize), he and the other staff “believe that there’s no chance anything but our victory will be confirmed on Tuesday. The union has overwhelming support in the office.”

AJAM is set to join a flurry of digital outlets that have have gone union this year, though the only one not to attain voluntary recognition. ThinkProgress, Salon, Vice, and Gawker have organized with Writers of America East (WGAE). The Guardian recently unionized under New York NewsGuild. (The unions do not appear to be directly competing for industry turf, however.)

WGAE has unionized some of the bigger new media brands, with Gawker’s roughly 118 editorial workers and the editorial portion of 700-strong US-based staff of Vice. NewsGuild, a division of Communications Workers of America, is well established in traditional media, with about 26,000 workers, and some 2,000 digital journalists overall, including staff at In These Times, Newsweek’s Daily Beast, Truthout, and The Nation.

Levine says AJAM staff now look forward to negotiating a contract that will help them realize the mission that has drawn young journalists to the company over the past two years. Labor unrest has grown, he says, as the workplace dynamics have proven to be less progressive than AJAM’s public reputation as a progressive, globallybminded outlet.

In response to The Nation’s query, AJAM management said in a statement, “Regardless of the ballot outcome, our main priority is to work with our employees, listen to what they have to say, and do everything that we can to enhance their daily experiences working at AJAM.”

AJAM staff are broadly concerned with bread-and-butter issues of wages and schedules, Levine says, but a major issue that drove the unionization effort is what workers see as a lack of an effective grievance procedure. Since “there is no system for our voices to be heard…very few people feel satisfied when they have taken things to management that need to be addressed,” he says. Throughout the unionization process, he adds, tense meetings with management have reflected a reluctance to acknowledge both the general labor concerns and the proposal for a collective bargaining unit. In this strained workplace climate, Levine says, “over time…you get less and less excited about the journalism, which is really the only thing we should be thinking about.”

Labor is thinking about journalism, too. NewsGuild just launched a major organizing campaign focused on web journalism, encouraging digital-media workers to organize to secure “quality journalism, quality jobs” (complementing the union’s recent name change, dropping the “paper” from its old title of “Newspaper Guild”). WGAE, which has historically represented screenwriters, specializes in a project-based organizing model that has flourished in the entertainment industry’s creative workforces. Though these journalists represent a tiny corner of the digital economy, by investing in this sector, unions are showing not only the maturity of the digital journalism sector but also the potential power of labor in the Wild West of new media.

Harnessing the digital disruption actually evokes a media labor tradition—newspaper and entertainment workers helped rebrand industrial unionization during the 1930s, and redefined the meaning of industry itself, as writers, actors and other creative workers mobilized to prove the artistic nature of their craft did not preclude the need for rights and standards at work.

NewsGuild President Bernie Lunzer sees unionization as a logical progression for new media workers, as precarious staff realize that their once-fledgling startups have accumulated investment faster than they’ve raised wages. He told The Nation earlier this year that digital journalists are “becoming more cognizant that not all media is poor, that some of the media outlets some of [them] are working for are profitable.”

WGAE organizer Justin Molito says that, despite the often decentralized structure of digital-media workplaces, virtual organizing has its virtues: “Working through different platforms and ways for people to engage is essential,” he told the Belabored podcast in July, but “it can move things quicker too…because people are constantly communicating and are in touch with each other in a different way. Then conversations can happen quicker.”

But labor discussions have seemed comparatively sclerotic at Salon and AJAM, where unions faced resistance from management. And at Buzzfeed, despite its subversive brand image, CEO Jonah Peretti has chafed at unionization using typical (and readily refuted) neoliberal arguments, and warned staff that a union would threaten to interfere with the Silicon Valley–esque corporate culture of “a flexible, dynamic company.”

Yet organizing seems to be precisely what’s injecting dynamism into AJAM’s newsroom: “the organizing has given a lot of people in the office hope, in a way that we haven’t had hope in a long time,” says Levine. “Two years ago when we all came together at Al Jazeera, we all were very excited about what seemed to be an attempt to forge a serious news organization that both cared about the voiceless in the world and the underrepresented…and had the same attitude towards encouraging the journalists who worked inside of Al Jazeera to pursue these stories.”

As for AJAM’s role in the new media sphere’s incipient labor movement, he adds, “I’m really excited to be working in a sector of the economy that is realizing again just how good organized labor can be for the worker…. It’s a great moment, [but] it’s a moment, for some reason, that management at Al Jazeera doesn’t feel like it wants to be part of.”

Once the votes are counted, however, the metrics will speak for themselves: Labor is trending upward.