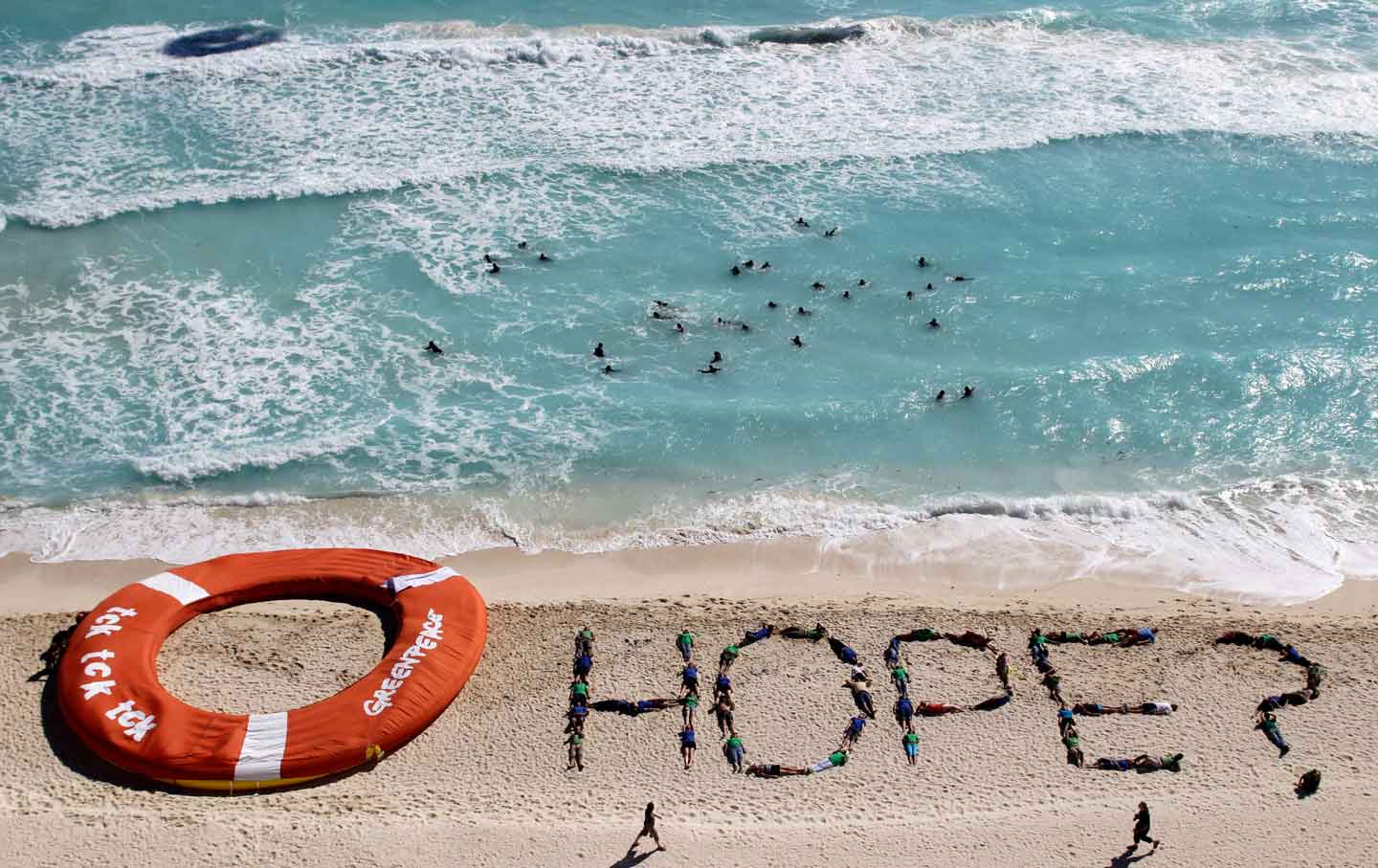 It’s no secret that Hillary Clinton’s climate platform leaves a lot to be desired. She at least thinks that climate change is real, but she supports fracking, accepted over $500,000 from the fossil-fuel industry (more than Trump), and promoted oil and gas extraction around the world. We need Clinton because Donald Trump is a racist, sexist, bigoted demagogue who denies climate change, would dismantle the EPA, retract the already weak Paris Agreement and approve Keystone XL.2

The climate movement can pressure Clinton in a way that is impossible with Trump. As Bill McKibben says: “Our job is to elect someone we can effectively pressure.” The climate movement has already shown that it can influence Presidential politics. The climate movement successfully pushed Obama to reject the Keystone XL and Dakota Access Pipelines and pressured Clinton to make statements during her campaign on Keystone XL, the TPP, and related issues. “We have seen that, when we apply pressure, we have leverage over Clinton,” writes Becca Rast, an organizer with 350 Action.3

I want to believe that the climate movement can influence Clinton’s climate platform—not just in rhetoric but in reality—but I am skeptical. If we assume that our success in pressuring Obama predicts success with Clinton, then we may be headed for trouble. President Obama rejected two pipelines, but also championed the fracking boom, authorized hundreds of offshore fracking sites, allowed massive fossil fuel extraction on federal lands and celebrated the deeply flawed Paris agreement. In a recent high-profile event on climate change with Leonardo DiCaprio, Obama defended fracked gas, proclaiming that we have to live in the “real word” even though it’s “not going to save the planet.” He may have done more than any other President to act on climate, but that’s still not enough. Obama represents the business-as-usual theory of change that spells catastrophe for youth and frontline communities.4

So far, there’s a similar story with Clinton. Activists have birddogged her throughout the campaign and won some victories. She opposed Keystone XL and said that she would support a moratorium on all oil, coal, and gas extraction on federal lands. These statements are important steps, but other components of Hillary’s climate plan undermine her good words. In the last debate, she called natural gas a “bridge to more renewable fuels.” Her only mention of climate change was: “So I have a comprehensive energy policy, but it really does include fighting climate change, because I think that is a serious problem.” She talks about the climate crisis like it’s just another issue, not a massive existential crisis that threatens everything that we love. One of her many leaked emails revealed her true thoughts on climate activism:5

“…my view is I want to defend natural gas. I want to defend repairing and building the pipelines we need to fuel our economy. I want to defend fracking under the right circumstances…. I want to defend this stuff. And you know, I’m already at odds with the most organized and wildest. They come to my rallies and they yell at me and, you know, all the rest of it. They say, ‘Will you promise never to take any fossil fuels out of the earth ever again?’ No. I won’t promise that. Get a life, you know.”6

A new report from Oil Change International concludes that to avert complete climate catastrophe, the world must immediately cease all fossil-fuel extraction and transition to renewable energy by 2033. There’s no wiggle room—no space for Clinton to reject one pipeline and approve more offshore drilling. The climate movement has yet to build the political power than can achieve these kinds of goals. If we want Clinton to keep fossil fuels in the ground, we need fresh, creative, influential tactics that can truly hold elected leaders accountable to people and planet.7

After Bernie Sanders dropped out of the race, Clinton became reluctant to lead boldly on climate for fear that she would lose moderate voters and wealthy supporters. According to the Guardian, before Sanders dropped out, Clinton gave 42 speeches and mentioned climate change 18 times. After Sanders’s endorsement, Clinton delivered 40 speeches with only eight climate mentions.8

How can Clinton so easily take the climate vote for granted? She knows that we will support her because a Trump presidency would break the planet. I think that there is a deeper reason too: She doesn’t fear or even understand the climate vote. Our electoral power is not yet strong enough to push Clinton to support real action for climate justice.9

We know that Clinton does cater to some voting blocs. She reflected language from the Black Lives Matter movement in the first debate, signaling that she pays attention to on-the-ground protests. She’s also incorporated rhetoric and platforms from the “Feel the Bern” movement to win young voters, like calling for debt-free college. If the climate movement wants Clinton to shift her policies radically and keep fossil fuels in the ground, we need to figure out a way to ensure that our political voices cannot be ignored.10

The climate test this election is: Do you believe in science? As the world teeters on the brink of irreversible catastrophe, one would expect presidential candidates to debate climate solutions. Instead, to win points in 2016, all Clinton has to say (as she did in the first debate) is, “I think it’s real.” In fact, many of the very short climate-change mentions in her speeches declare that she accepts climate science. “If you believe climate change is real…then start voting” she said in Ohio. “I believe that climate change is real,” were her words at the Democratic National Convention. “We need a president who believes in science,” she declared in Florida. A recent tweet from Clinton’s account read: “We have a choice between taking serious steps to combat climate change—and refusing to admit it even exists.”12

We have regressed to a bar so low that it’s practically touching the ground. Of course, the well-funded denial machine has instilled doubt across America for decades. Their efforts stall action and shape conversation. Trump capitalizes on this doubt. But this regression is also another signal that the climate movement has yet to discover the new strategies and tactics that can truly influence politicians, hold them accountable, and force the conversation forward. It seems like Clinton does the bare minimum because there’s no immediate incentive to elevate the conversation and no consequence for just sliding under the preposterously low bar.13

To protect what we love the most from climate chaos, we need climate policy. Very few politicians champion climate leadership. That is why the climate movement needs political strategies that are as effective and powerful as possible. The climate is changing. We need to change too.14