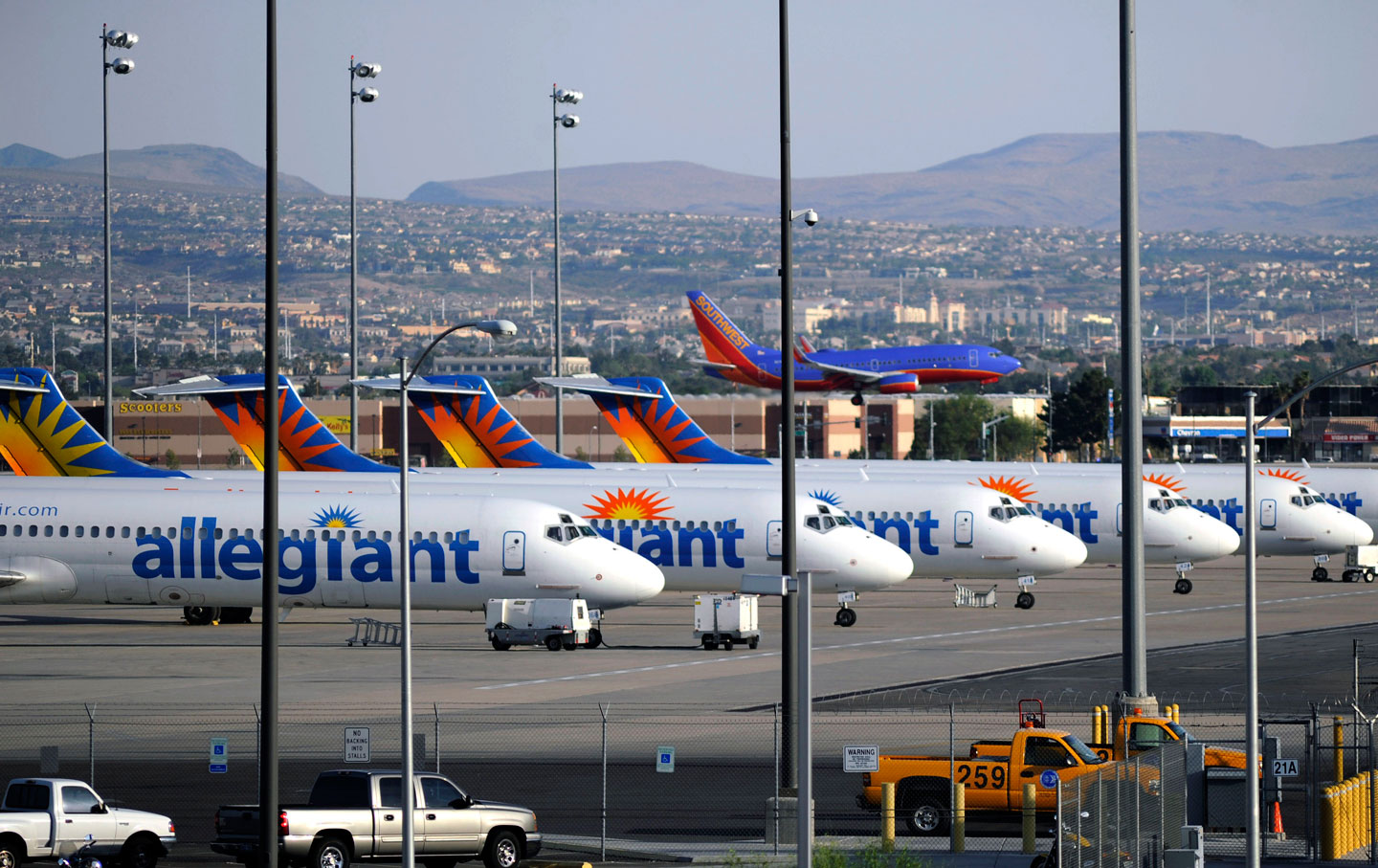 Holiday travelers flying on Allegiant Air got an unexpected free visit to Tampa Bay, Florida, last Friday, but it wasn’t exactly the getaway they were hoping for. En route to the Punta Gorda airport in southwest Florida, their flight was diverted to Tampa, according to the Associated Press, “after the pilot spotted an illuminated fuel indicator light in the cockpit.” Passengers reported afterwards that they had been “told there was a problem with fuel.” The airline cited poor weather.

Whatever the actual problem was, the incident adds yet another stain to Allegiant’s already sketchy safety record. The discount airline is known for low fares and abysmal service. And Allegiant’s failure to stay on schedule appears to be matched by its heel-dragging on its ongoing contract talks with its pilots and other workers.

In a recent letter to the Allegiant’s Board of Directors, ahead of their annual shareholder meeting, the pilots, with APA Teamsters 1224, complained that while resisting a reasonable compromise on fair work rules in contract talks that have dragged on for more than two years, “Allegiant is continuing to cut corners on industry‐standard practices” and “using scheduling systems that create pilot fatigue and frustration.” Meanwhile, litigation over the scheduling rules is ongoing; pilots recently threatened to strike before being blocked in court.

Like many Allegiant passengers, pilots have voiced major frustrations with Allegiant’s flight schedules, arguing that the company has instituted a new scheduling system called “Preferential Bidding,” which they say makes pilots’ schedules more precarious and undermines the industry-wide standard of seniority-based scheduling. The union voted to strike in order to restore the “status quo” rules under the previous contract, and that legal battle continues following a district court’s ruling that, despite a court injunction against Allegiant last year, the company had since then adequately accommodated pilot’s concerns with some technical adjustments, and a strike at this point would be “unlawful.”

But patience with the new scheduling system is wearing thin. At a hearing, according to the injunction order, many testified that the new system, which limits seniority preferences for flights, was causing unpredictability in an acutely time-sensitive industry.

“One pilot testified that while his bids to have both Christmas and Easter off were rejected, a more junior pilot was given those days off. Other pilots testified that the new system makes it very difficult for pilots to reliably predict their schedules and that no other airline uses a system like it.” Some complained Allegiant had failed to respect both pilots’ and the courts’ demands for “honoring seniority and improving transparency and predictably” in reforming scheduling practices.

Though the union did not specifically blame the flight scheduling system for recent botched flights like the Tampa incident, pilots argue that their poor working conditions are one of many interrelated failures of Allegiant’s business model. The pilots stated that the scheduling rules, might “look efficient on paper but in reality create confusion, pilot burnout and frustration,” reflecting Allegiant’s general tendency to operate “with too few pilots, aircraft maintained at bare-minimum standards and with no room for normal operational disruptions such as weather.”

Cameron Graff, first officer at Allegiant and Executive Council chairman, tells The Nation, “We’re behind the [rest of the industry] in almost every area, in total compensation, in retirement, in scheduling…the ability of that pilot to have scheduling flexibility.” Since the union hasn’t been able to operate normally, he adds, the impasse affects safety processes as well, since the union’s normal function includes pilots’ ability to “participate in important safety committees.” As for the ongoing litigation to restore the old status-quo rules, Graff adds, “We don’t feel that we’ve asked for anything that is not reasonable,” noting that Allegiant maintains some of the highest profit margins in the industry. (The airline has also been entangled in gridlocked contract talks with its flight attendants’ union, TWU Local 577.)

Fatigue and stress have long been major concerns for the industry, particularly on “budget” carriers, known for poor pay (with young regional airline pilots typically starting at $23,000 annually), along with exhausting and straining conditions. Research on pilot performance indicates scheduling patterns play a major role in fatigue and alertness problems, although there have been some recent industry reforms.

Numerous customer complaints at consumer sites and media reports suggest that under Allegiant’s ultra-low-fare, “no frills” marketing model, low-level service is business as usual. The company, as The Cincinnati Enquirer reports, keeps ticket prices at rock bottom in part by “hiring a third-party contractor to staff ticket counters and gates, and having no back-up planes at origination airports.”

Allegiant has denied the Teamsters’ claims of mistreating pilots and cutting corners on safety, citing that FAA auditors had not identified any safety issues and calling the protest campaign “an effort to manipulate the public by raising unfounded concerns about the safety of our operations.”

The dispute over the scheduling system has coincided with a report, requested by the union, by the Aviation Mechanics Coalition, criticizing Allegiant for poor training and maintenance and inadequate safeguards. The report cited potential avoidable causes of recently reported operational problems, such as smoke in the cockpit, and faulty landing gear. Meanwhile pilots had reported concerns about being “forced to fly aircraft that barely passes acceptable safety standards,” leading to dangerous “‘just move the metal’ culture.”

The downward spiral in safety and labor is global, particularly among discount carriers. Bloomberg reports that the transnational structure of the industry has led to what critics call a “Walmarting” pattern in which airlines compete by seeking to cut costs globally, intensifying pressure to squeeze labor and operating costs and “scour the globe for low labor standards and lax rules and regulations.”

While customers often don’t consider a pilots’ working conditions when booking a flight, the way an airline does business is inextricably intertwined with the way it treats the people who are supposed to help you get to your destination safely and on time. When pilots can’t predict their schedule, they can’t predict what will happen in flight, and this summer, customers are starting to realize that a holiday on the cheap can lead to some costly misadventures in the air.