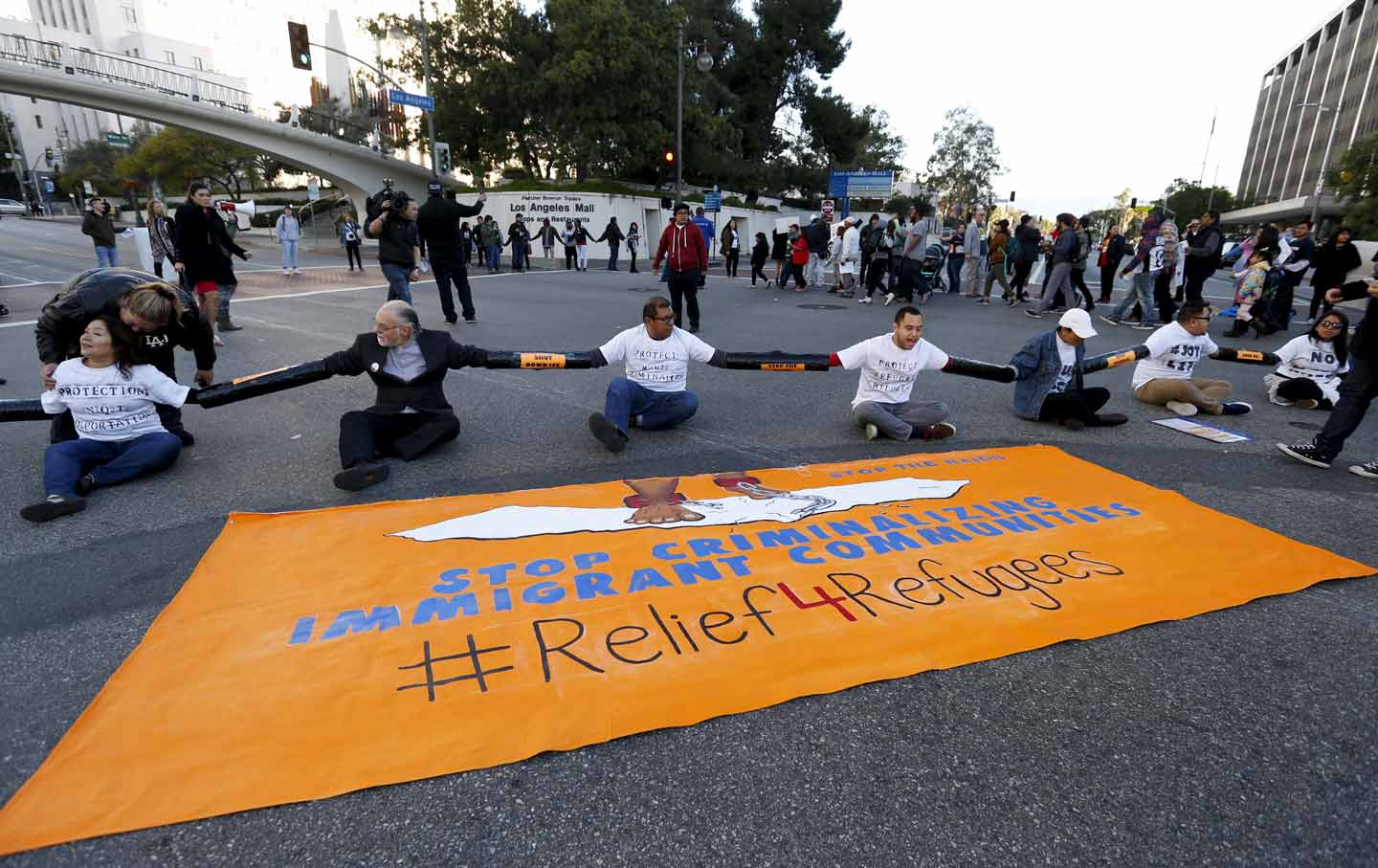 Two years ago, back in their hometowns in Bangladesh, they were ordinary young men whose political involvement didn’t go beyond local support for the opposition Bangladesh National Party (BNP). But political violence drove AJ, 21, Jahed, 27 (names concealed to protect their identity) on an epic journey across three continents and straight onto the battleground of American immigration politics. Now they have become national campaigners for the rights of refugees and even advised a couple presidential hopefuls on asylum policy. But they’re headed for exile again—soon to be deported back home, and, they fear, driven to an early grave.

“When we came, I remember the moments when we were getting close to the border and the amount of joy [I felt] about finally reaching safety, finally reaching a place of refuge,” recalls Jahed, speaking through a translator five months after his release from an El Paso, Texas, detention center. “And then, soon after we crossed the border and we were detained, the nightmare started.”

He is among 159 Bangladeshis who are reportedly facing deportation, possibly within days, despite fearing they will face partisan mob violence if repatriated.

“If we’re going to be killed when we’re sent back, we might as well just stay here and die through a hunger strike.”

Although their asylum claims were summarily rejected, the migrants continue to resist deportation. Steeled by their transborder journey—smuggling routes snaking across a dozen Latin American countries, followed by indefinite imprisonment—they launched a hunger strike last October, dubbed the #ElPaso54, then spreading across several other detention facilities in Louisiana and Alabama, feeding into a wave of civil disobedience that has rocked ICE’s detention network over the past year.

Jahed, who was detained starting in late 2014, remembers the collective frustration building up to their uprising: “We told them that ‘if you send us back we will die.’ And [the ICE staff] just laughed at us.” They then concluded that “we faced and almost tasted death on our journeys here, and if we’re going to be killed when we’re sent back, we might as well just stay here and die through a hunger strike.”

Primarily, they denounced what they see as endemic bias driving the asylum process, arguing that their detention cut off access to legal counsel while they struggled to find affordable local lawyers well-versed on Bangladesh’s human-rights situation. Bail rates were reportedly as high as $35,000. Many said their initial petitions and hearings were incoherent, due to language barriers and inadequate translation services.

﻿Bangladesh has among the highest numbers of asylum claims outside the Western hemisphere.

Advocates also criticize the government’s designation of the BNP as a “Tier III terrorist organization.” Immigration lawyers say the courts apply this label in a way that runs counter to clear evidence in case law and media reports that BNP members are in fact routinely victims of political violence under the ruling party.

The detainees, about 50 of whom have been released in subsequent months, say South Asian Muslims face a systemic deficit in justice. Bangladesh has among the highest numbers of asylum claims outside the Western Hemisphere—more than doubling from 2013 to 2014 to about 580. Granted claims have dipped slightly from 63 to 52.

Though the median length of ICE detention was just 11 days as of 2012, DRUM says the detainees it is working with have spent nine months to two years in detention, despite the fact that many if not most have passed their initial “credible fear” interviews, clearing the first hurdle of legal review.

In an 11th-hour effort to thwart the deportation orders, DRUM plans to file legal complaints about discriminatory treatment and the ongoing threat of persecution. But by now, many of the detainees have already missed the 30-day time window to appeal, and those with final deportation orders can only hope to have their cases reopened or otherwise delayed.

DRUM also worries the detainees could return to a drastically more hostile climate, because their case has gained notoriety in Bangladesh. During the hunger strike, Minister Consulate of Bangladesh visited the El Paso detainees, according to the detainees’ accounts, aiming to intimidate them into ending their protests. Following an awkward diplomatic press release, the detainees soon became a hot news topic back home, which practically ensures that they and their families would be further exposed as political dissidents, according to DRUM.

(ICE arranged a similar meeting last year between detained Sikh asylum seekers and an Indian diplomatic representative, apparently to “berate” them into giving up their asylum claims. The questionable legality of such liaisons may factor into DRUM’s forthcoming legal challenge.)

“When we came here, one of the expectations that we had was that if we file asylum that our information will be protected.” Following ICE’s perceived collusion with Bangladeshi authorities, AJ says, “we clearly know that what’s awaiting us is a very bad situation, and we’re outraged.”

Immigration authorities generally do not provide details on individual cases. But ICE has issued public statements claiming detainees have consistently been treated appropriately under monitored conditions. Meanwhile, the Executive Office for Immigration Review, the division of the Justice Department that oversees immigration courts, says that it “does not make determinations on the designation of terrorist organizations” But immigration judges, as a rule, “consider all evidence and arguments presented by both parties and decide each case based on the available information.”

Overall, asylum seekers are supposed to be protected from “refoulement,”or forcible return to dangerous or violent circumstances. Yet whether the court accepts a claim varies wildly, often hinging on arbitrary factors like quality of legal representation or the judge’s gender.

Meanwhile, the deported have often belatedly proven their “credible fears” in the worst possible way. There have been numerous media and academic reports of Mexican and Central American deportees being killed since repatriation or left further exposed to violence, extortion, and abuse.

DRUM activist Fahd Ahmed warns that ICE is effectively making refugees more vulnerable: “People are being denied their cases, but the legitimacy of their asylum claim is immediately being proven by the fact that when they’re being deported they’re being killed. So there’s something there that we think needs to be looked at, needs to be examined, and some changes need to be brought about.”

Those changes can’t come soon enough for Jahed, who says each time he reports to authorities for his parole supervision, he wonders when his next forced exile might come: “If they do decide to take me in [to custody] and send me back, they might as well just send my dead body back, because it’s about the same thing.”