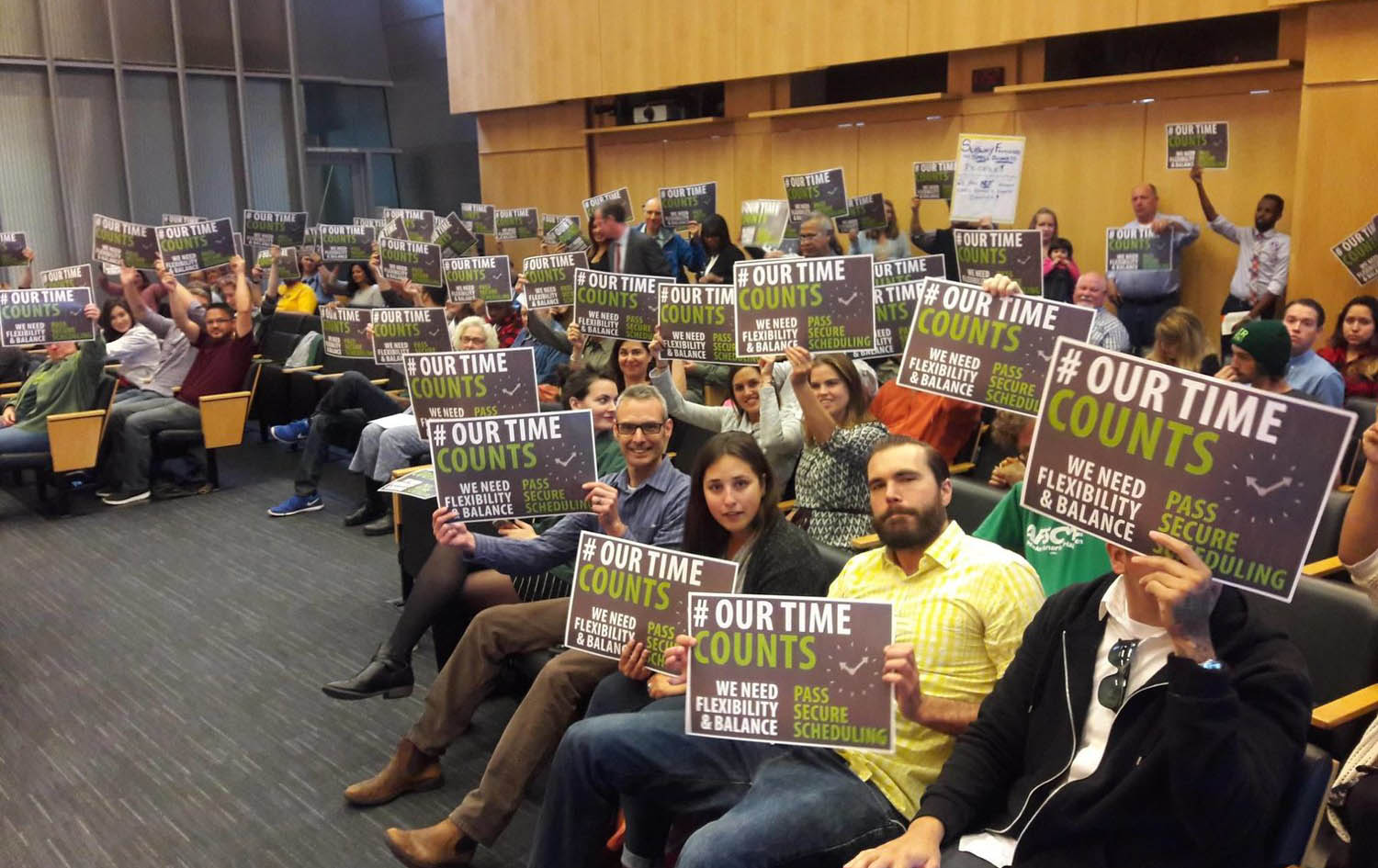 The Seattle City Council holds its first hearing on proposed fair-workweek legislation, September 2013. (Photo courtesy of the Center for Popular Democracy at http://www.fairworkweek.org/)

Emeryville, California, is a tiny municipality surrounded by Oakland and San Francisco. Its population hovers under 12,000, yet the city has four shopping centers, making it, in essence, a giant outdoor mall for the Bay Area. Every chain you think of—Target, Gap, Sephora, Apple—has set up shop there. During the holiday season, that meant demand for workers spiked.

Monique Hendrix, 30, works part-time at the Bath and Body Works in Emeryville. She’s a “key holder” at her store, which means she performs the same duties as a manager, but with a lower hourly wage—and no ability to control her own schedule. That means Hendrix often gets her schedule a few days in advance, and the hours tend to be erratic—they change week to week. Sometimes she works more than 40 hours a week, sometimes she works less.

This past holiday season was one of Hendrix’s most difficult. She worked six or seven days a week, often closing some shifts and opening the next ones. That meant she would leave work at 11:30 pm, make the 45-minute trek home, and arrive for work again at 8am. One week, she worked nearly 60 hours. Hendrix wanted to request more days off, but she knew there was a risk if she did: When another worker at her store told their district manager she was thinking of getting another part-time job, the manager made it clear to this worker that she’d have to leave if she did.

“I get no slack,” said Hendrix, who is the mother of a 9-year-old son. “It’s starting to affect my home life. I had an emergency meeting with my district manager, but all she cares about is numbers.”

Happily, workers like Hendrix may soon get a reprieve. This past October, the Emeryville City Council became the latest municipality to pass a “fair workweek” law. Starting July 2017, the law will require large employers like Bath and Body Works to give their employees two weeks advance notice of their schedule, pay them more if they make last-minute changes to it, and offer them extra hours before hiring more part-time staffers. It’s part of a nationwide push being led by the Fair Workweek Initiative of the Center for Popular Democracy and a slew of nonprofits in cities where part-time, unpredictable work has become as big a scourge as low wages.

The fight for a humane work schedule has a long history in the struggle for workers’ rights in this country. Beginning at least as far back as the 1820s, when East Coast craftsmen began agitating for a 10-hour day, workers have been pressing for more control over the days and times they’re required to work. For many decades, the emphasis was on limiting hours, which could be copious and overwhelming: In 1890, when the government first began tracking such information, manufacturing workers reportedly averaged 100 hours a week. It was this outrage—the outrage of overwork—that led unions to fight for, and win, an eight-hour workday, and a two-day weekend.

But over the last several decades, as union membership has declined, and retail work has largely replaced manufacturing jobs, a different kind of scheduling problem has emerged: These days, most retail work is part-time, with a process known as “just-in-time” scheduling—which pins workers’ schedules to customer shopping patterns—often dictating the hours. For low-wage workers, this means that erratic schedules, inconsistent hours, and short notice of scheduling changes are the new normal. So too is underemployment—although just-in-time scheduling can translate into workers’, like Hendrix, being over-scheduled during some weeks of the year. New fair-workweek laws are hoping to change that by forcing employers to give workers more consistent and reliable schedules.

“I hope this legislation gives people better insight into what a company is supposed to be like,” Hendrix said. “There’s no reason you should have to choose between supporting your family and being with your family.”

Fair-scheduling legislation has been gaining steam for a few years, but 2016 seems to have been something of a tipping point. In 2014, San Francisco became the first city in the country to pass fair-workweek legislation. Then, in September of last year, New York City Mayor Bill De Blasio announced that he will support fair-scheduling legislation for fast-food workers in the city (the Center for Popular Democracy said it expects a measure to be introduced there soon). Less than a week later, Seattle became the second city to enact its own legislation. And in October, Washington, DC, passed a scheduling law specific to building-maintenance employees. In November, San Jose voters approved a ballot measure that ensures part-time workers will be offered extra hours before new, part-time employees are brought on.

Meanwhile, just before Christmas, six chain retailers announced they would end on-call scheduling (the practice of calling employees just a few hours before a shift and expecting them to be free). The move could affect 50,000 workers. And three major cities will put forward fair-workweek legislation this year, according to Carrie Gleason, who leads the Fair Workweek Initiative for the Center for Popular Democracy (she can’t say which because the cities aren’t ready to go public yet).

“In some sense, the new Trump administration is inspiring local and state policymakers to go bolder and set the standard for work,” she said. “We’ll see mounting pressure from retail workers themselves. We’ll see more and more people willing to step up, because they can’t count on the [federal] government protecting us.”

Although fair-workweek laws are still relatively rare, the momentum behind them can be seen as part of the nationwide push for better standards of pay and improved working conditions that has been building over the last few years. The Fight for $15, which has been at the forefront of this movement, highlighted the plight of fast-food and other low-wage workers, and helped successfully pass minimum-wage laws in dozens of municipalities. Campaigns for paid sick leave, at the city level as well as for federal government contractors, have won more than a million workers the right to stay home or see a doctor when they are feeling too ill to work.

While the fight for higher wages has garnered much of the attention of the media and politicians, scheduling has remained, until recently, an under-discussed topic, even as it becomes ever more crucial to workers’ rights. The percentage of part-time workers has been steadily increasing over the decades, from 13.5 percent in 1968 to a high of 20.1 percent in 2010 (since then, it’s fallen to about 18 percent). In some metropolises, the numbers of part-time workers is significantly higher. In San Jose, for example, about 43 percent of work is part-time, up from 26 percent 10 years ago. While retail and food workers are most likely to face part-time shifts, even white-collar jobs are increasingly part-time, according to one study.

Part-time jobs have obvious disadvantages. They usually do not provide health insurance; they tend to pay lower wages, forcing workers to rely on government assistance or multiple jobs to eke out a living; and, of course, schedules are often wildly unpredictable, meaning that it’s hard for workers to make time for family, school, or anything else.

“It really wreaks havoc on people’s non-work lives,” said Susan Lambert, a professor at the University of Chicago and a co-author of one of the biggest studies on part-time work. “It’s been wonderful to see increases in the minimum wage, but that’s only one side. Scheduling legislation goes hand-in-hand with the minimum wage.”

Predictably, the retail industry has come out strong against fair workweek legislation, with local retail associations claiming the legislation will force employers to lay off workers or close stores. But according to Seema Patel, the deputy director of the San Francisco Office of Labor Standards Enforcement, which has been overseeing San Francisco’s implementation of the law since 2014, those fears have not come to pass.

“I have not heard from a single employer that this ordinance has had a negative impact on their business,” Patel said. “I certainly expected to hear more, but I cannot count one.”

Emeryville provides another good example of how corporate concerns about profit versus workers’ rights may be overblown: Since mid-2015, the city has had one of the highest minimum wages in the nation, but the chain stores there have stayed open, and expanded, over the last year.

The organizers behind the push for a fair workweek were hopeful that the 2016 presidential election would help elevate workers’ issues, like fair scheduling, to the national level and would even build toward federal legislation. But Donald Trump’s election has dashed those hopes, shifting attention back to the local campaigns that are, for now, workers’ best bets.

“If we saw anything is this last election, it’s that cities and states are the bright spots right now,” said Jennifer Lin, the deputy director of EBASE, the main local nonprofit that pushed for fair workweek legislation in Emeryville. “The national level was pretty devastating for low-wage workers, and workers in general this year. But at the local level we’re doubling down.”

Correction: An earlier version of this article stated that the California Retailers Association is petitioning Emeryville to repeal its predictive scheduling ordinance. That is incorrect. CRA has not petitioned the city to overturn the new fair workweek requirements. We apologize for the error.