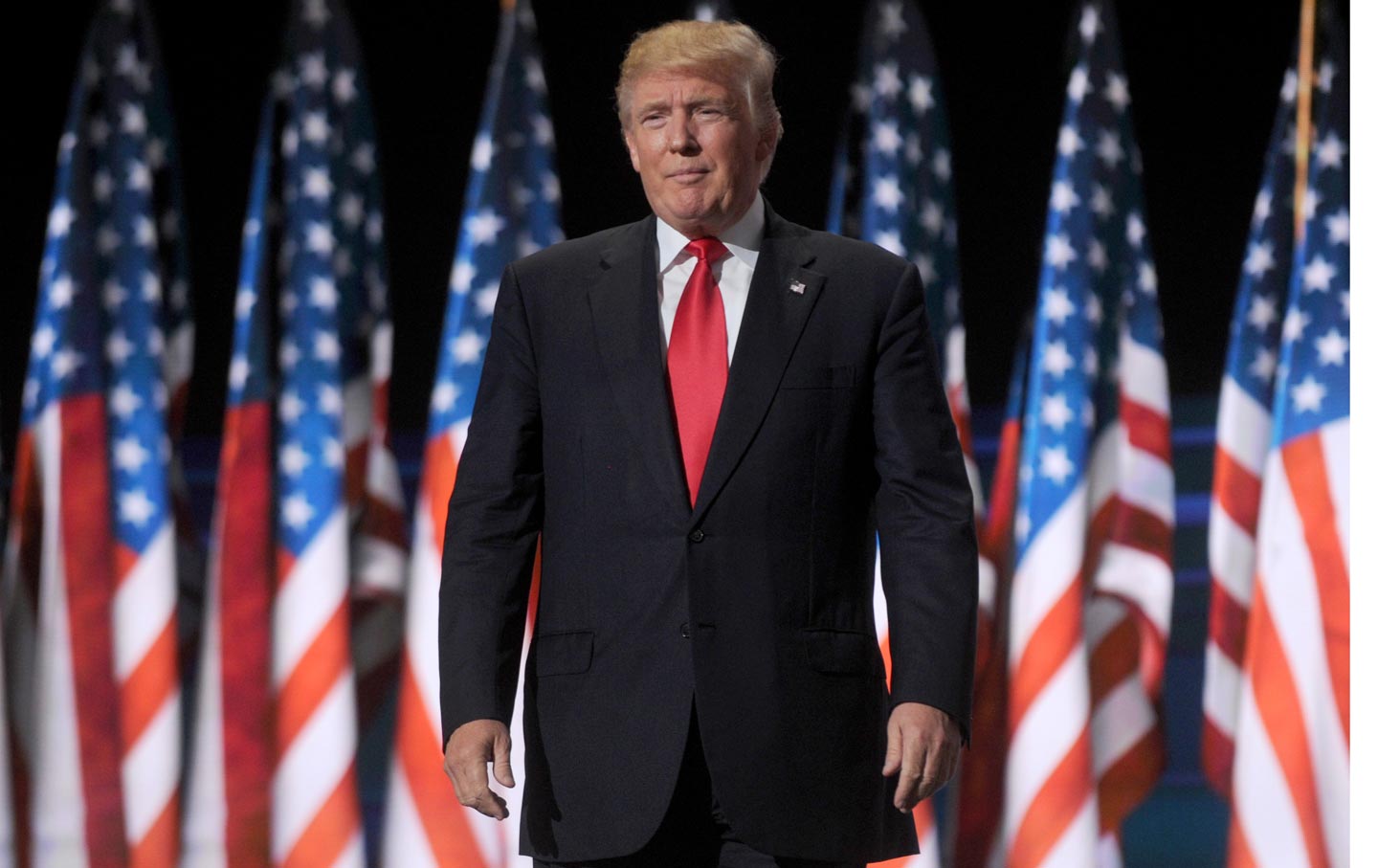 Donald Trump accepts the Republican nomination for the president of the United States of America at the Republican National Convention in Cleveland, Ohio, on July 21, 2016. (Van Tine Dennis / Sipa via AP Images)

“We believe in American exceptionalism,” reads the first line of the 2016 platform of the Republican Party, which just nominated a standard-bearer who says he doesn’t believe in American exceptionalism. “I don’t think it is a very nice term,” Donald Trump said last year. “You’re insulting the world…. if you’re German, or you’re from Japan, or you’re from China, you don’t want to have people saying that. I never liked the expression.”

It was Ronald Reagan who, perhaps more than any other politician, helped popularize the concept of American exceptionalism. He did so as part of the larger New Right project of re-moralizing American foreign policy, of once again investing US military and economic power with a sense of higher purpose. To do so, Reagan turned John Winthrop’s 1630 description of the Puritan mission in the New World as a “shining city on a hill” into American exceptionalism’s key metaphor. In his 1989 farewell address, Reagan said, “I’ve spoken of the shining city all my political life, but I don’t know if I ever quite communicated what I saw when I said it. But in my mind it was a tall proud city built on rocks stronger than oceans, wind-swept, God-blessed, and teeming with people of all kinds living in harmony and peace.”

When pundits today say that Trump represents something new in American politics, they aren’t necessarily denying that his racism, misogyny, and threats of violence are foreign to American history. Rather, claims that Trump is unique mostly have to do with his refusal to leaven his nastiness with appeals to universalism. After all, Reagan could mock the 1964 killing of civil-rights activists by launching his 1980 campaign at the spot where they were murdered, in Philadelphia, Mississippi, talking about “states’ rights”; Bill Clinton could, just before Super Tuesday 1992, campaign in front of Georgia’s notorious Stone Mountain Correctional Institution, “where he stood next to conservative Southern Democrats Sam Nunn and Zell Miller, as well as Dukes of Hazzard star Ben Jones (recently heard prominently defending the Confederate flag), posing for photographers in front of a group of black inmates.” George H.W. Bush ran ads with Willie Horton and Republicans rebuilt their party around the Southern strategy and “welfare queens.” Yet even as they dog-whistled racism, they still, apparently, appealed to the better angels of our nature, a balancing act that somehow makes those politicians more organically rooted in the history of America.

What rankles about Trump, what seems to upset our Vox–cracy, is that Trump doesn’t mix his darkness with kitschy light. “Very very dark,” Chris Hayes said in a tweet, based, I think, on a preview of Trump’s acceptance speech: “Straight up nationalism no chaser.”

But Trump is quintessentially American. By that, I don’t mean his hucksterism, or that his wealth somehow confirms America’s belief in the prosperity gospel. Nor do I want to reduce the American experience to Trump’s white supremacy and sexism. Rather, I mean that even as Winthrop was describing a City on a Hill, he and other Puritans were already lamenting its ruin, perfecting the jeremiad as a uniquely American genre: self-condemnation as a “vehicle of cultural cohesion.”

America was conceived with the jeremiad, the sermon of laments. From the beginning of the founding of the Massachusetts Bay Colony in the early 1600s, one minister after another denounced what they described as a drift away God, toward pomp, acquisitiveness, and ambition. “Ruine upon ruine, destruction upon Destruction” was evidence of Puritan failure and God’s dissatisfaction, as the religious compact, sealed by God’s grace, gave way to the commercial contract, signed with blotted ink, enriching the few and impoverishing the many. Signs of God’s displeasure were visible for all to see: stony soil, spoiled crops, discord, heresy, pestilence, locusts, unbearable hot summers and freezing winters, wars, shipwrecks, infanticide, and “unsatisfactory children.” And, of course, New England’s unending bloodshed: war followed by more war, genocide against Native Americans and, in retaliation, the murders of settlers.

Trump says he doesn’t believe in American exceptionalism, but he is a practitioner par excellence. He’s Jeremiah to Reagan’s (and Clinton’s) failed City on a Hill, laid to waste by decades of disastrous economic policy and unending military interventionism.

I don’t want to make too much of his acceptance speech. It wasn’t particularly graceful. But it was American. Rhetorically and functionally, it followed in the same vein as the 17th-century jeremiad, cataloguing plague after plague to create cultural cohesion, what some observers are now calling ethno-nationalism. Trump listed ruin upon ruin, destruction upon destruction. Death and disease. Danger, crime and violence. Crying mothers and lost children. An “American hellscape,” Vox said of the speech.

Where Puritan preachers pointed out the evils of land speculation, concentration of property, and a growing economic gap within the community, Trump now condemns the indifference of corporate America, the venality of the banks, and community-crushing trade deals whose text is longer than the Bible itself.

As with Trump today, domestic shortcomings in colonial New England were set within a global context of seemingly unending religious war. “Don’t we deserve a like destruction?,” asked Reverend Charles Chauncy from his Boston pulpit, upon hearing news of a series of devastating earthquakes that struck Spain and Portugal around the time of the Seven Years’ War—a war that included wholesale elimination of Native American communities and the subordination of survivors. “We are certainly a very sinful people,” Chauncy said. “God has other judgments besides that of an earthquake.”

No one today, especially not Jeremiah Trump, has the courage of Chauncy to point to the destruction we visited on Iraq, or, even as the RNC was proceeding and pundits were pontificating, to the murder of a dozen Syrian children by US bombs, and ask, “Don’t we deserve a like destruction?” I think, though, such doubt is present in the lacerating subtext of Trump’s criticism of nation building and the neoliberal/neoconservative vision of unending war. “Poverty and violence at home,” Trump said, “war and destruction abroad.”

We have failed in our errand. How dare we call ourselves exceptional, by what right? Trump asks. Who among us can honestly say that’s not a legitimate question? We need to turn inward, Trump says in response, and look into ourselves: “We must abandon the failed policy of nation-building and regime change.” “When the world looks at how bad the United States is,” he said to The New York Times in his last interview, “and then we go and talk about civil liberties, I don’t think we’re a very good messenger.”

Trump’s call for a turn inward is not “isolationism,” despite being branded as such by the media. Starting with the Puritans, settler America’s oft-expressed desire to be “left alone,” to become “a world unto itself,” could only be first realized by total, eliminationist war and chattel slavery. Over a half-century ago, the historian Perry Miller recognized the contradiction; within the negative prophesy of the jeremiad is positive action: There is “bewilderment, confusion, chagrin, but there is no surrender,” Miller wrote, highlighting a strain of bellicosity that is now identified with the American right: “A task has been assigned upon which the populace are in fact intensely engaged. But they are not sure any more for just whom they are working; they know they are moving, but they do not know where they are going.” The promise offered by reform—be it the abolition of private property in the 17th century or to abrogation of Nafta in the 21st—can never be realized. But it’s the participation in the rhetoric of sin that, according to Miller, allows absolution and paves the way for future action, a rhetorical transaction that today is present in Trump’s bond with the masses. “I am your voice.” “Under the guise of this mounting wail of sinfulness,” Miller wrote of the early American Calvinists, “this incessant and never successful cry for repentance, the Puritans launched themselves upon the process of Americanization.”

For Miller and for other thinkers of his postwar generation, it was frontier expansion that solved the problem identified by the jeremiad, the move across the continent and then out into the world helping to evade the problems of property, of concentrated power, of self-interest and ambition. And here is where we come to what is new about Trump: He doesn’t have that option. Trump is a symptom of the disease he diagnoses, the failure of decades of deindustrializing trade policy and ever more hubristic and disastrous military interventionism. Trumpism, as I tried to explain earlier, is what arises when the frontier closes, and when robust social policy to address our mounting problems isn’t possible. Since social democracy, at least in this election cycle, isn’t an option, Trump’s ethno-nationalist white supremacy looms as a treat, tempting many.

But Hillary can’t opt for empire either, or at least not in a way that would mitigate rather than deepen already existing problems. And that is what makes the current moment not just new but dangerous. Expect Clinton’s spokespeople, during the upcoming DNC, to try to cast Trump’s “darkness” as un-American, as Paul Begala already has: “Optimism is central to the American character,” said Begala, suggesting that what he called Trump’s “Midnight in America” speech will backfire.

This will be as effective as if a DNC spokesperson, transported back to an 18th-century Connecticut pew, answered Jonathan Edwards’s “Sinners in the Hands of an Angry God” sermon, as congregants swayed and shrieked, “What shall I do to be saved? Oh, I am going to Hell,” by insisting that “America already is great!”