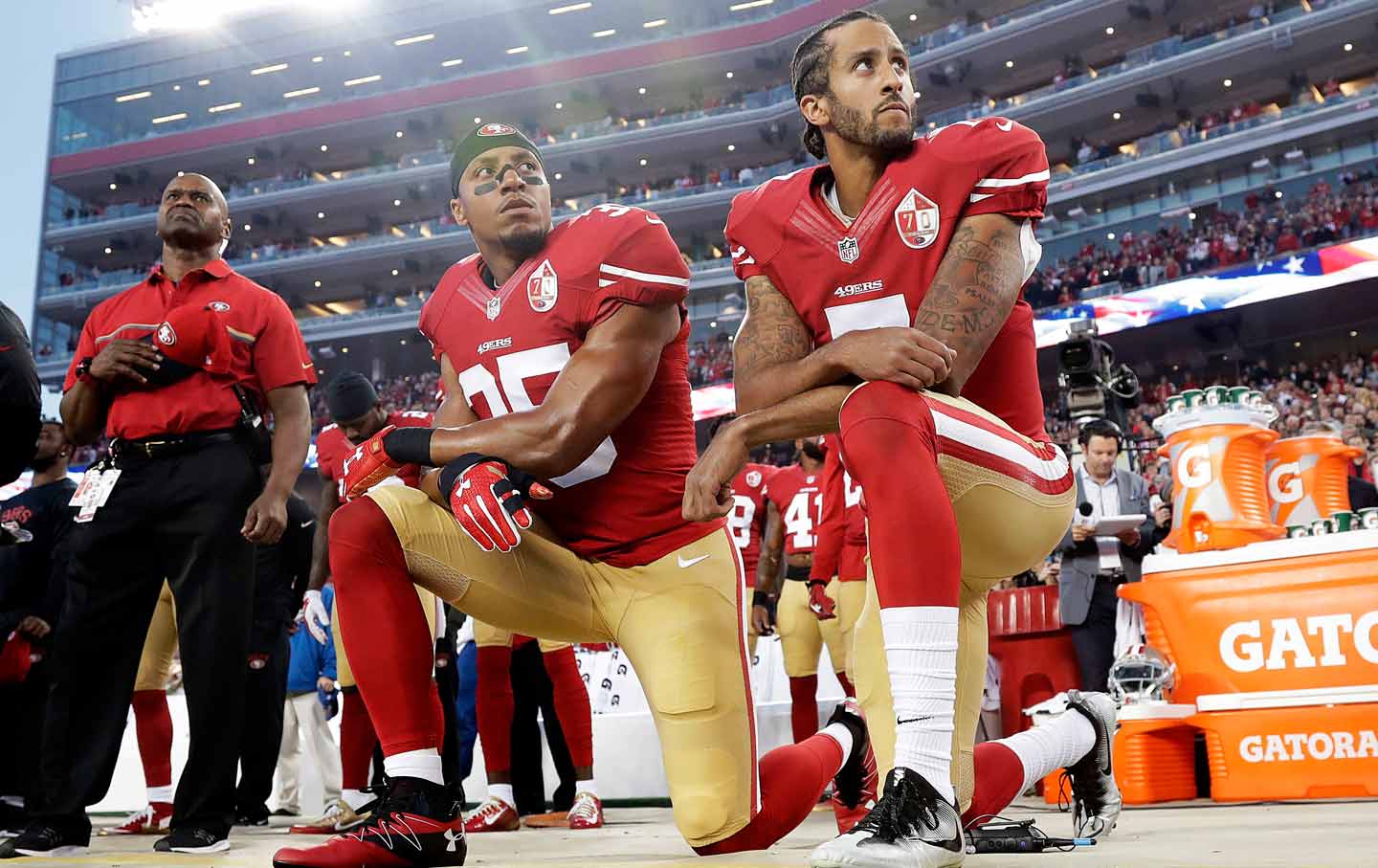 Howard Bryant is the author of eight books, including Juicing the Game: Drugs, Power, and the Fight for the Soul of Major League Baseball and The Last Hero: A Life of Henry Aaron. He is a senior writer for ESPN and the editor of The Best American Sports Writing 2017. His latest book, out next week, is The Heritage: Black Athletes, a Divided America, and the Politics of Patriotism.

What is “the Heritage”? How do you define it?

It’s not a responsibility they’ve always wanted, but it’s one that was created in the mold of the Paul Robesons, the Jackie Robinsons, and then Muhammad Ali and Tommie Smith and John Carlos. I think it’s something that no matter how big your contract is, it’s a responsibility that will always stay with you, not because of your successes, but because of how far African Americans have had to go to gain equality.

We’re certainly seeing a rebirth of political athletes right now. During and immediately after this previous era, when very few athletes spoke out, did you think that the Heritage had died?

Absolutely. I thought that it had died. The backlash immediately following Smith and Carlos [raising their fists on the 1968 Olympic stand] and Curt Flood [taking Major League Baseball to the Supreme Court in opposition to rules preventing free agency] meant that once you get into the early 1970s, it’s OJ Simpson, and then Michael Jordan, and then Tiger Woods. It was a succession of athletes accepting the idea that, after the 1960s, everything is fine; that the players were making more money than they’d ever made before, and that was enough.

There had been a movement about 10 or 12 years worth before Reaganism, where it seemed like the culture was willing to accept redress as part of our identity. Whether it was through affirmative action or increased hiring in police and fire departments, universities, or newspapers, you started to see a movement of recognition that there had been underrepresentation of blacks. And also, somewhat of an activist spirit of the federal government and local governments in recognizing systemic racism. Jim Crow was dead, and I think there was an attitude that everybody’s equal now and there was no reason to be in the street and there was no reason to continue on. And the players had finally started to earn as well.

So, I don’t think there’s any question that there was a cultural argument amongst African Americans whether there was still a need to stay active. I don’t know if we believed that we had to. I think what’s funny about that is that this attitude was growing at a time in the 1980s, when so much was being taken away. There was far more of a conservative crackdown and more emphasis on police power and more emphasis on undoing those victories of the 1960s, and the players still didn’t come around because they were making money. They didn’t feel they had to be involved.

So, what revived the Heritage?

And having a black president meant that this was supposed to be the moment where we were in post-racial America, and we were harshly reminded that there’s nothing post-racial about America. And I think the players were seeing their peers—both on social media and physically in the streets—protesting something that they couldn’t turn their backs on. They saw what was happening and they realized that as the most powerful and most influential black employees in the United States. They had to do something.

This is no different than Jackie Robinson recognizing that his [more mainstream] activism must not be used by the powers that be to undermine Paul Robeson’s [more radical activism]. He learned it late, but he learned it. You have to have both. And if you’re one of those people who goes out of your way or discounts the necessity or the importance of being in the streets, then you undermine the Heritage, even if you’re not directly trying to do so. I think that’s the battle that a lot of these players have. It is that they still believe that their money or their celebrity negates the importance of being in the street. There’s no substitute for being in the street. There’s no substitute for confrontation. This is part of your inheritance, and if the players don’t accept that part of their inheritance, then they’re not being true to this Heritage. I think that that’s the challenge that the players have because the players are trying to avoid something that can’t be avoided, and that’s confrontation.

Talk about the collision between the Heritage, which as you said goes back nearly a century, and the post-9/11 era, in which we live in a state of permanent war and mandated patriotism at sporting events. What has that collision produced?

There is no greater influence in American culture today than 9/11. 9/11 is Pearl Harbor. 9/11 is Watergate. When you look at sports, or going to the movies, or walking through the airport, the specter of 9/11 touches everything. And what 9/11 did to sports was transform it from a place where being apolitical was part of the business model, to making politics part of the business model.

And those politics are extremely, extremely powerful. They are militarized. They are racialized. They are internalized in terms of heroes and villains, and it set up a confrontation because you have this hero-worship of police at the time when police brutality is an everyday occurrence, and fear in the black community, and many of the athletes are from these communities. You’re asking African Americans to deify and to genuflect toward the very entities that have really caused a lot of harm in the black community.

That’s what has taken place in sports. And now we have black players being turned against their own country by the White House and by the people who own the teams, and it is deliberate. It’s deliberate and it’s designed to demonize not only the black athlete, but the black concern over police brutality: to turn fighting police brutality into being un-American. It has essentially turned the American flag into a symbol of whiteness and turned the players who are protesting police brutality into symbols of anti-Americanism, which could not be further from the truth.