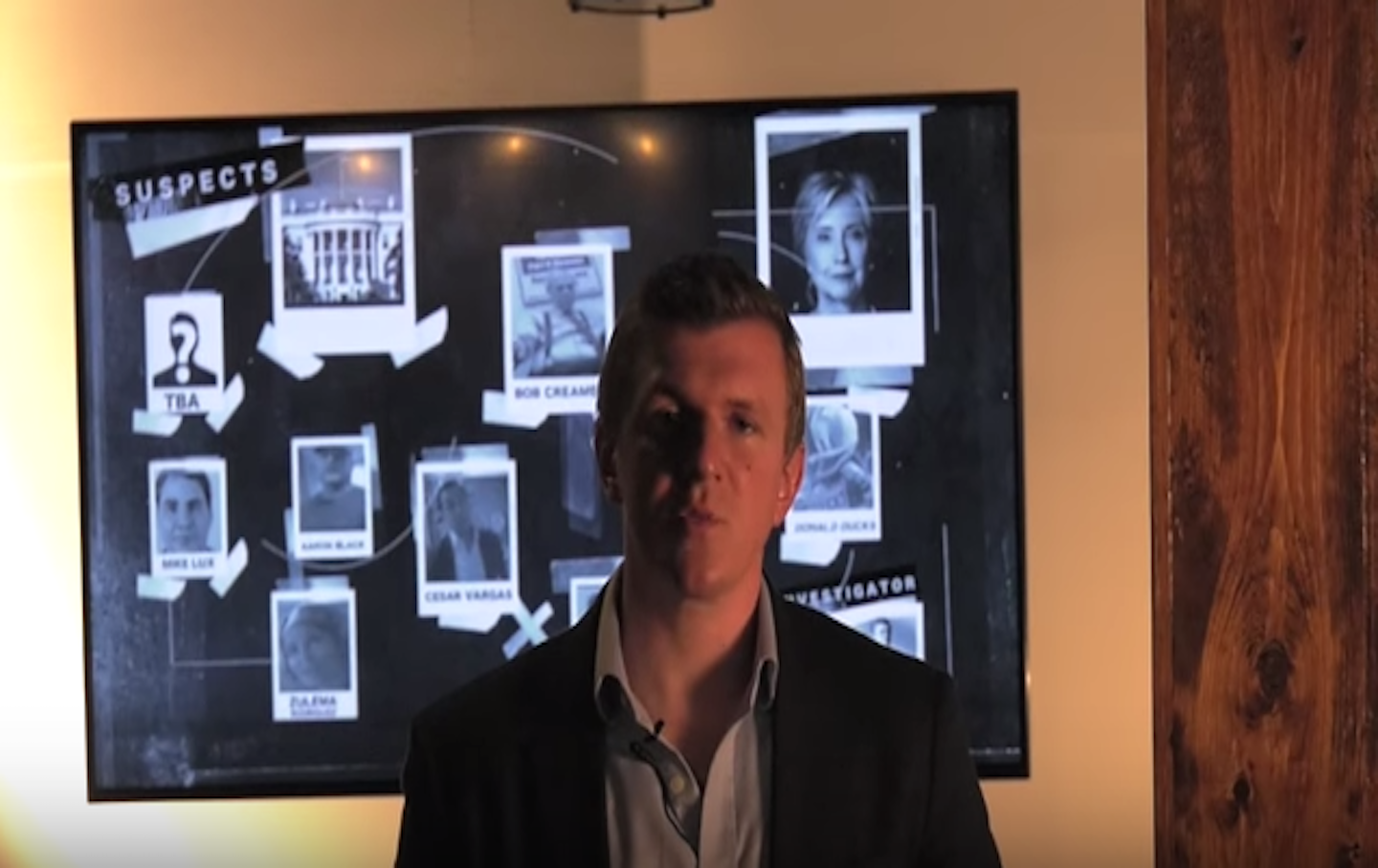 It’s a near certainty that Donald Trump will bring up the latest work from conservative activist and serial fabricator James O’Keefe at tonight’s debate. That’s because Trump is increasingly broadcasting his fear that the coming presidential election will be rigged, and O’Keefe purports to demonstrate vote-rigging in his videos, which were released this week. (Late Wednesday, news broke that O’Keefe would be one of Trump’s guests at the debate).

The O’Keefe productions, under the imprint of “Project Veritas,” comically try to convey an ominous aura. O’Keefe, doing an unconvincing impression of Robert Stack on the old Unsolved Mysteries show, tells viewers “what you’re about to see will make you uncomfortable, and angry. It’s graphic, uncensored, and disturbing.”

And there are some untoward things in the videos. Scott Foval, formerly a contractor for Americans United for Change, boasts on an undercover video that “it doesn’t matter what legal and ethics people say, we need to win this motherfucker.” He says that “we have mentally ill people that we pay to do shit, make no mistake. Over the past 20 years I have paid off a few homeless to guys to do some crazy stuff.” And he also claims credit for sending in protesters to Trump rallies to induce “crazies” to attack them, and asserts that a Trump rally in Chicago that was canceled because of protests and threats of violence was actually the work of his group.

Contemporaneous reporting credited those disruptions to students, not Foval’s agitators, so it’s possible he was just being overly boastful. And there are already some questions about the timing, since Foval wasn’t contracted to do any work until long after the Chicago rally.

But the darker set of allegations involve a supposed voting-fraud scheme—and there’s just no meat to that charge.

In the second Project Veritas video released this week, titled “Mass Voter Fraud,” an undercover mole talks with Bob Creamer, then the president of Democracy Partners. The unnamed mole sketches out a hard-to-follow scheme in which he would hire day laborers, pay them at local addresses, and use the pay stubs to somehow “find my way around the voter ID, the voter registration laws for Hispanics.”

Creamer seems slightly confused, and diplomatically offers to “write down these options” and continues, “Let me see if I can chat with the people who are most involved in Hispanic voter registration.”

At a different meeting, another Veritas mole posing as a possible donor outlines a similar scheme to Creamer, who responds: “Here’s my fear. I’m going to run this by our lawyers. My fear is that someone would decide this was a big voter-fraud scheme.”

That’s all they have on Creamer, who announced this week he was “stepping back” from his role at Democracy Partners this week.

O’Keefe’s report attempts to further indict Creamer by splicing these conversations with undercover video of Foval in a bar, where he appears to discuss a hypothetical scheme to get out-of-state voters to participate in voting in a more critical state. (For instance, he outlines how using a bus might prove conspiracy, but using several cars might be harder to detect.) It’s unseemly, but O’Keefe leaves us without critical context—we don’t know that Foval is actually proposing this, and in fact, it seems like he’s answering a hypothetical question. There are other times where it’s pretty clear he might just be talking about busing in activists to various protests, not to vote.

The closest O’Keefe comes to connecting Creamer to Foval’s musings is yet another undercover conversation with Foval, in which he seems to suggest that Creamer might be okay with some unspecified scheme. Whatever the scheme is, we’re left to guess, though the video suggests it’s the day-laborer voting fraud. Foval claims Creamer told him he wouldn’t “touch that with a 10-foot pole,” but Foval also said he told Creamer that he could carry it out without Creamer’s officially knowing. “We talk about a lot of things we don’t talk about,” Foval joked.

There is, finally, a separate conversation with Cesar Vargas of the Dream Action coalition. An undercover, faceless voice, proposes a scheme “…essentially getting a bunch of people on a bus, or whatever, taking them around the country. They legally can vote. So they can vote. At the same time they are getting work permits under a different name and again voting on behalf of people who cannot vote.”

But there’s a huge jump-cut before the thrust of Vargas’s response, where he says nothing will happen in this year’s election, but perhaps in the 2018 midterms, there might be “more opportunity for us to jump into this.”

We don’t really know what “this” is, since Project Veritas won’t release the full transcripts or tapes of its shoots, as it has in the past. But there’s reason to be extremely wary—time and again, O’Keefe has been busted for fudging his investigations. In his famous ACORN investigation, for example, O’Keefe made it seem like he was wearing an outlandish pimp costume when talking to ACORN employees—but he wasn’t. The tape was just spliced that way. In another sting against National Public Radio, an executive who later resigned appeared in O’Keefe’s audio to be calling the Tea Party racist, but was in fact just quoting a Republican who held that view.

Even viewed in the most trusting light, what do we have here? Creamer is perhaps a little too slow to condemn an illegal voter-registration plan. (Though ultimately he does.) Foval, a mid-level Democratic operative, outlines how one could get around voter-identification laws, without ever saying he plans to do it—nor does O’Keefe present a shred of evidence that the scheme went past a barroom conversation. And Vargas says some unspecified scheme might happen in 2018.

We need a lot more than this to declare the election “rigged.” And if Donald Trump holds up these tapes as evidence, he’s standing on incredibly shaky ground.