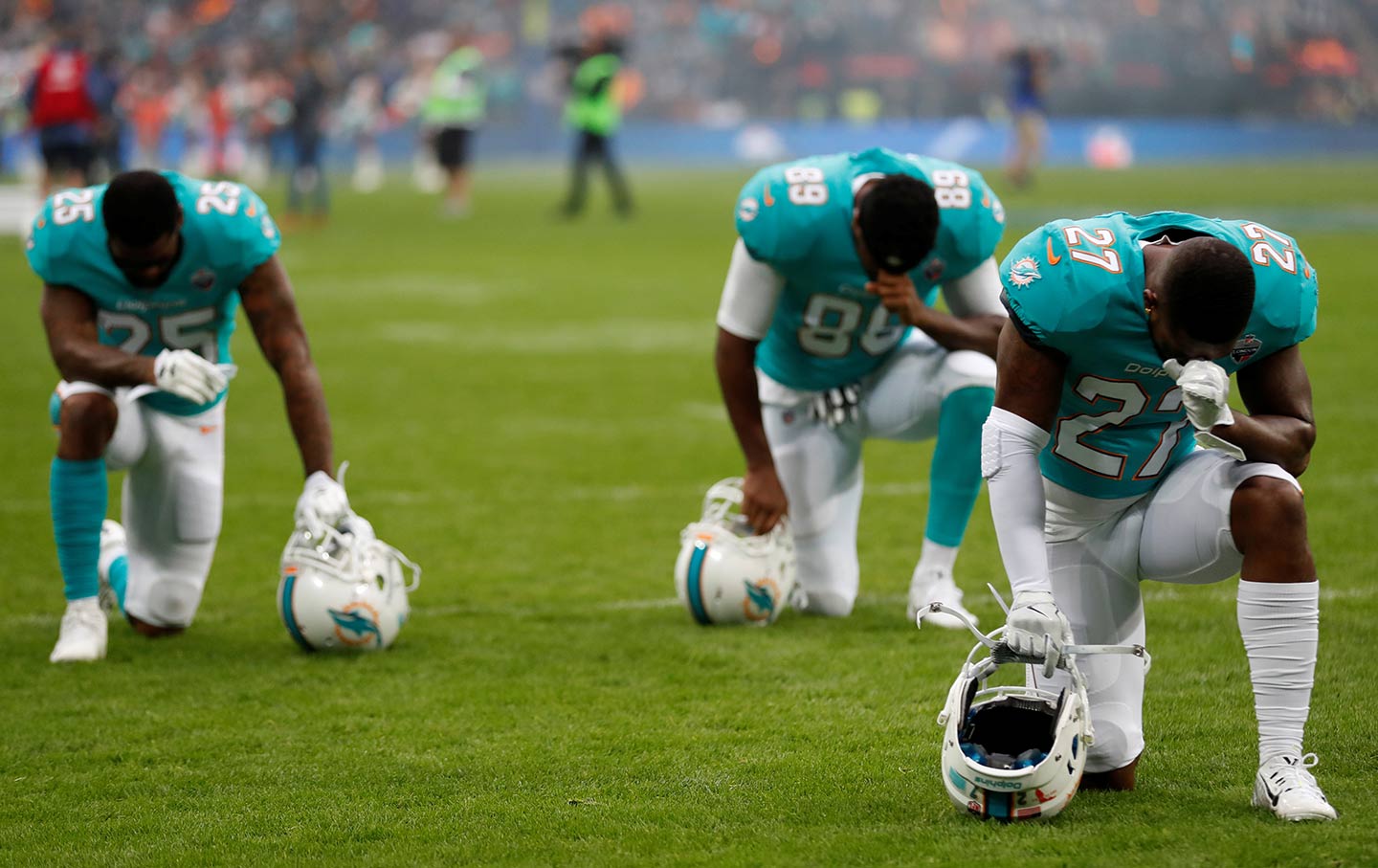 Donald Trump attempted to focus the nation’s ire on anti-racist black athletes in the National Football League. He tried to demonize them on the highest possible stage, calling for them to lose their jobs. His transparent aim was to find a bogeyman in order to distract people from a cascade of scandal and failed legislation, and his administration’s disastrous response to the suffering in Puerto Rico. Well, the results are in, and here is what this idiotic effort has produced.

First and foremost, it has provoked death threats aimed at numerous NFL players, an unconscionable result that falls right on this president’s shoulders. One Trump supporter with a massive Twitter following even linked the horrific Las Vegas shooting to “the same mentality” as these players (forgive me that I don’t link to it.)

Second, despite Trump’s smirking line that “this is not about race,” numerous players and black coaches have also been showered with endless racial invective across social media. But despite a fusillade of abuse, and NFL owners working overtime to change the meaning of these protests to anything other than what they actually were, something remarkable has happened.

Even though these brave athletes have been called anti-US, anti-military, and anti–apple pie, public opinion has shifted in their favor. According to a USA Today poll—and I am still stunned reading these results—“Most Americans say the protests by NFL players during the National Anthem are appropriate, a USA TODAY/Suffolk University Poll finds, and they say, by overwhelming margins, that President Trump’s heated criticism of them are not.”

The numbers to back that up—in these draining, dark times—are cause for hope. By a margin of 51 percent to 42 percent, people say the players’ protests are “appropriate.”

Sixty-eight percent of respondents say that Trump’s call for games to be boycotted and players to be fired are in contrast “inappropriate.” That includes one-third of Republicans. There is a racial divide, but 44 percent of white people support the protests and, again, in these times where Trump and his media echo chamber are exerting all their will to distract, divide, and destroy, I’ll take it.

In addition, there is another poll, this one produced by Seton Hall Sports, that shows that 84 percent of respondents support the players’ right to protest, with only 16 percent saying players should be required to stand for the anthem.

This represents a striking shift towards the players’ side since Trump’s comments. In 2016, when Colin Kaepernick and a select few players were taking a knee, 72 percent of Americans said that they thought Kaepernick’s behavior was unpatriotic. Another 61 percent said that they did not “support the stance Colin Kaepernick is taking and his decision not to stand during the national anthem.”

What are the conclusions we can draw from these numbers? The first and most obvious is that Donald Trump is poison. He’s a profane bully whose ugliness pushed people into supporting the players and their right to protest, even if the reasons for the protest have received less attention from the moment Trump jumped into the fray.

The second conclusion is that solidarity matters. Seeing almost 200 players take part in protests altered how people consumed these acts. The protests may have been met with boos in some stadiums, but if you’ve ever been to an NFL game, you know that the typical in stadium fan represents a very narrow slice of this country: wealthy enough to afford tickets, parking, and 10-dollar beers, as well as overwhelmingly white (and the copious booze doesn’t help). Solidarity and struggle change public opinion. It’s always been that way, and it will always be that way. We forget that because we think social-media platforms like Twitter are public opinion, when they actually represent profoundly distorted windows, warped by professional trolls, bots, and most of all, those with the time and emotional energy to spend all day on Twitter.

Lastly, the entrance of Trump also turned this into a referendum on whether the president should be able to squelch dissent and curse out those with whom he disagrees. It’s heartening that most people say no to this. It’s also miles from the original point of these protests: that we desperately need police reform in this country. The fact that police shootings are up in 2017 has not made a dent in this conversation. Refocusing attention on this fact is the urgent task by everyone on the field and off. This is about Tamir Rice, not Donald Trump. The more it’s about Trump, no matter what the poll numbers say, the more we stand to lose.