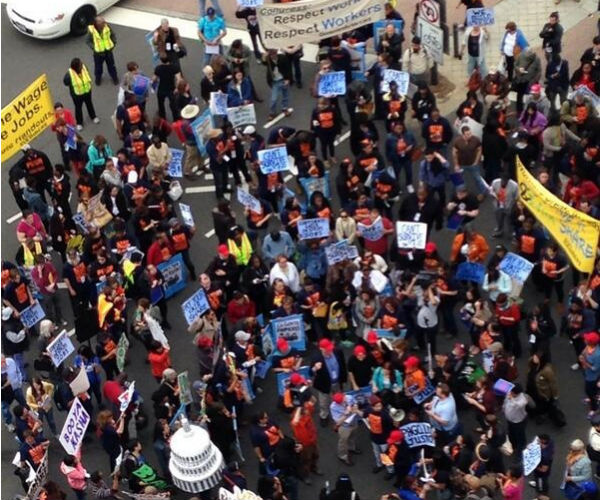 Hundreds of protesters marched on Washington, DC on Monday, April 28, 2014 to demand an increase in the federal minimum wage. (Photo courtesy of the Unitarian Universalist Service Committee)

Spotted among a few hundred people rallying outside the Capitol on Monday for a higher minimum wage: A bearded man in a jean jacket, with a bandana on his head. A woman with close-cut gray curls and a gap where her top front teeth should be. A young man in a suit. Dreadlocks, ponytails, and mullets; baseball caps and cowboy hats and a lime green headscarf. Teenagers in hoodies, and one in a fishnet top with a leopard print bra underneath. Middle-aged women in pink hats.

With the Senate preparing to hold a procedural vote as early as Wednesday on a proposal to increase the federal minimum wage from $7.25 to $10.10 an hour, it’s worth considering what’s at stake in the debate—or rather, who. As the rally illustrated, it’s hard to point to a “typical” low-wage worker. Many are in the fast-food industry, the most unequal sector of the American economy. Others are in domestic work, or retail, or are bank tellers. Some are highly educated while others have not graduated from high school. One sure thing is that most aren’t kids making date money.

“The minimum wage affects everybody,” a McDonalds employee named Dylan said at the rally, which also called for an end to corporate tax breaks. “The working class has always been huge, but more and more people have been pushed into it because of the economy and the recession. There aren’t a lot of options. Even if you can go to college, that’s not necessarily going to get you anywhere economically. So there’s a big diversity of people."

Dylan’s point is backed up by a new report from the National Employment Law Project, which found that in the wake of the financial crash, low-wage jobs have replaced higher-paying ones. Job growth was particularly strong in the food industry, retail and in administrative temp work. There are now 1.85 million more low-paying jobs than before the recession, but 2 million fewer positions in mid- and high-wage industries.

With so many Americans at the mercy of a low-wage economy it’s not surprising that polls consistently show strong support for an increase to $10.10. Workers aren’t likely to see a national raise at that level anytime soon, however. Democrats anticipate that their bid to pass the wage increase through the Senate this week will fail to overcome opposition from Republicans, although some are also saying this won’t be the last time this year that members of Congress are forced to take a stance on the issue.

The key to breaking the political roadblock lies in mobilizing the huge volume of people struggling to get by on low-wage paychecks, said Representative Keith Ellison, who spoke at Monday’s rally. Corporate interests “already know that if they don’t pay you, they keep the money,” Ellison said. He continued,

Dylan, the McDonald’s worker, said that part of the challenge was convincing low-wage workers that they could make an impact. “A lot of workers don’t have the mentality that they can do something about the situation,” he said. Dylan, who wore a red bandana over his nose and mouth to protect his identity, said that in a decade of working at various fast-food places he’d become familiar with a culture “that makes workers feel like they’re completely subordinate. It makes doing things like [demonstrating publically] really hard.”

“People don’t have respect for us," said a domestic worker named Nalva. She worried about losing her job if someone at work found out that she was involved in the rally. "We don’t have rights. If you fight, they’ll kick you out,” she said. But she decided to fight anyways, recognizing that was the only route to better work, not just for her but for “the next generation.” Another group of workers is planning to rally on Tuesday night during a convention of the National Restaurant Association, a lobbying group that has consistently opposed raising minimum wage and other pro-worker policies.

As Ellison noted, “courage is contagious.” He continued, “There are millions and millions of Americans all over this country who know we need a change, they just don’t believe we can do it. That’s your job," he said to the protestors. "To make them believe.”