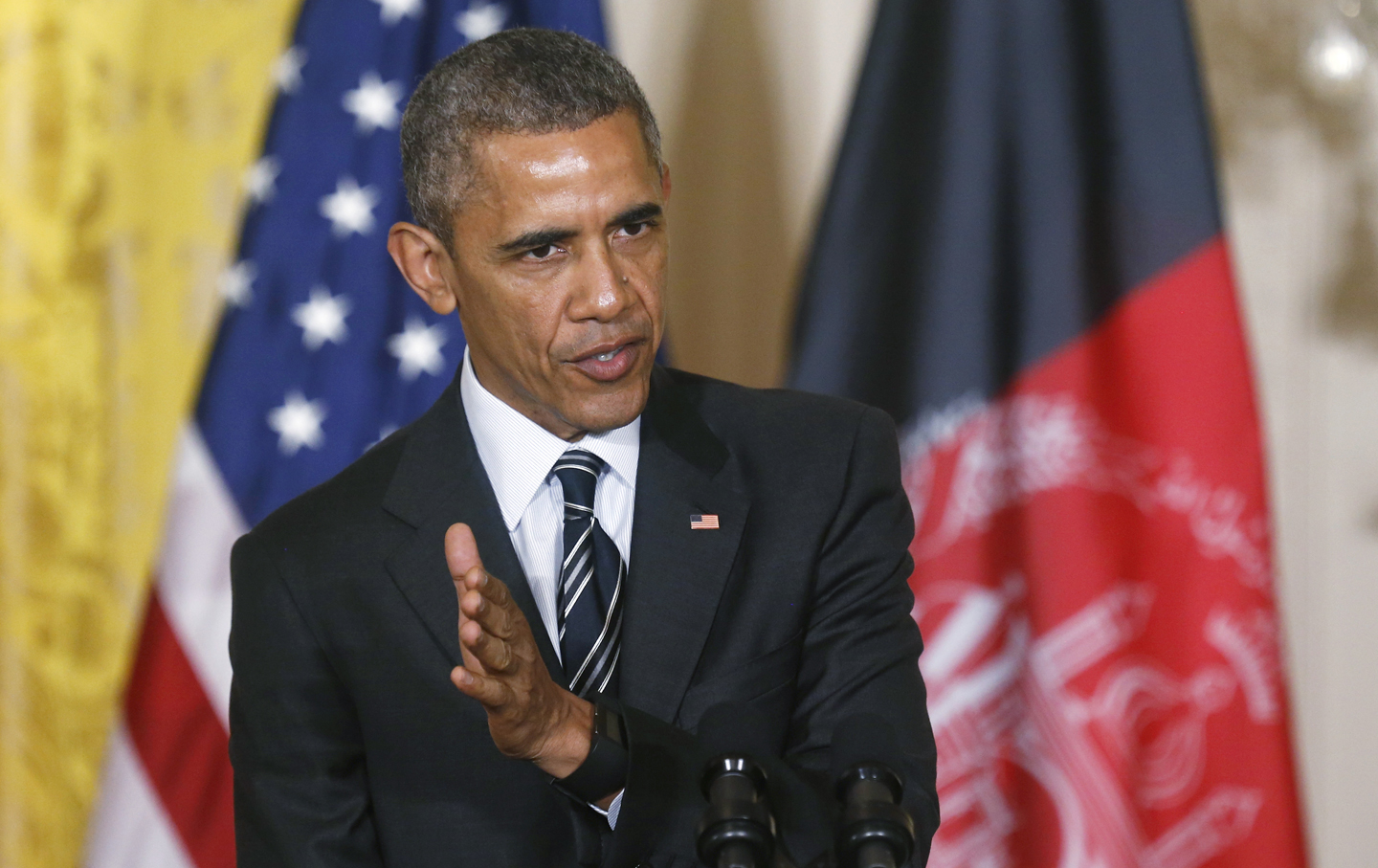 The aerial destruction that rained down on a hospital run by Doctors Without Borders in Kunduz, a provincial capital in northeast Afghanistan, on October 3 puts an exclamation point to the story of America’s 14 years of warfare in that Central Asian country. At least 22 people were killed—among them doctors, other medical personnel, and patients, including three children—and dozens wounded in the attack.

Beyond the obvious, immediate implications of the massacre—which serves as a reminder that for all of those 14 years, the United States has engaged in a brutal, mismanaged, and ill-conceived war—the ruins of the Kunduz hospital are more broadly a symbol of Washington’s reliance on airpower, including drone strikes and bombers, to combat a host of insurgent groups in Afghanistan, Pakistan, Iraq, Syria, Yemen, Somalia, and Libya.

After the events in Kunduz, Doctors Without Borders, known by its French acronym, MSF, issued a series of scathing statements, demanding an independent investigation “under the clear presumption that a war crime has been committed.” Christopher Stokes, MSF’s general director, said that the group is “disgusted” by the statements of Afghan government officials, who justified the attack by claiming that Taliban fighters were present.

“Not a single member of our staff reported any fighting inside the MSF hospital compound.” —MSF director-general

“Not a single member of our staff reported any fighting inside the MSF hospital compound prior to the US air strike on Saturday morning,” said Stokes. “The hospital was full of MSF staff, patients, and their caretakers.” And he slammed the United States for its inconsistent statements about the bombing. “Their description of the attack keeps changing,” Stokes noted, “from collateral damage, to a tragic incident, to now attempting to pass responsibility to the Afghanistan government.”

The attack was particularly egregious because MSF had repeatedly supplied the United States with the precise GPS coordinates of the hospital complex before the attack. President Obama’s spokesman called the Kunduz bombing a “profound tragedy” rather than a war crime, and said that the president has complete “confidence” in the investigations being conducted by the Defense Department, NATO, and US and Afghan military officers—but he refused to call for an independent investigation, as demanded by MSF. Despite a personal apology from Obama, the group reiterated its appeal for an independent inquiry to be carried out by the International Humanitarian Fact-Finding Commission, established under the Geneva Conventions.

Civilian casualties in Afghanistan have been piling up for years, of course—most of them the result of indiscriminate Taliban attacks, including randomly placed IEDs (improvised explosive devices) and suicide bombings. But a large number have been caused by what the United Nations calls “pro-government” forces: that is, the United States and its allies and the Afghan National Security Forces. In October 2013, in a special issue of The Nation titled “America’s Afghan Victims,” investigative journalist Nick Turse and I wrote a package of stories that provided an account of the carnage in Afghanistan. In it, we tried to cut through the murky smoke screen that has obscured the toll of dead and maimed civilian victims from the start of the war in October 2001 through the end of 2012. We documented 458 separate incidents that resulted in as many as 6,481 civilians killed by US forces during that period, and we provided a detailed interactive database covering every one of those incidents.

At that time, according to UN data, human-rights groups, and private researchers like those at Brown University’s Watson Institute for International and Public Affairs, it was clear that at least 19,000 Afghan civilians perished during the first 12 years of the war from violence on all sides. But we also showed that neither the US military, the Afghan government, nor the UN has done anything like a complete accounting of the war’s toll, and that the existing numbers understate the scope of the tragedy. Since then, of course—as underscored in red by the Kunduz massacre—those numbers have only grown. According to the UN Assistance Mission in Afghanistan, which began tracking the casualties just eight years ago, there were at least 14,728 civilian deaths between 2007 and 2012. Another 8,250 civilians have died through mid-2015, even as the US presence has been cut back. Again, based on our reporting, those numbers are only a fraction of the real total.

Despite massive US assistance, the Taliban has demonstrated staying power and the ability to control large areas.

If there’s such a thing as an “Obama doctrine” for us national-security policy, it’s built around two pillars: first, using airpower to attack malign actors such as the Taliban, Al Qaeda, and the Islamic State (ISIS), rather than the direct, on-the-ground involvement of US forces; and second, arming and training proxy forces and newly built national armies to carry out battles on the ground.

Both of those pillars are crumbling. Few, if any, experienced national-security policy-makers and military experts believe that air strikes alone can do more than harass or disrupt well-organized insurgencies. This dependence on airpower has been thoroughly discredited, as James Russell of the Naval Postgraduate School in Monterey, California, argued convincingly on LobeLog in the wake of the Kunduz massacre. The New York Times reported extensively on the failure of US efforts to support proxy forces and fledgling national armies, ranging from the $65 billion spent on Afghanistan’s army and police force, to the $25 billion spent in Iraq to rebuild the army that the United States dismantled in 2003, to the $500 million spent organizing a rebel force in Syria against ISIS that managed to put just “four or five” fighters in the field.

The seizure of Kunduz by the Taliban, the first provincial capital it has controlled since 2001, is a glaring sign of that failure. Despite massive American assistance and training for the Afghan army over many years, the Taliban has demonstrated not only staying power but the ability to seize and control large areas, menace provincial capitals, and even strike in Kabul itself. (As if that weren’t bad enough, a newly emerging ISIS force, exploiting rifts within the Taliban, has joined the fight.) Backed by Pakistan, the Taliban—under a new commander, Mullah Akhtar Muhammad Mansour, who took control after the death of Mullah Omar in 2013—has made gains across the country. Earlier this year, Afghanistan’s interior minister designated 11 provinces as severely threatened and nine more as facing medium-level threats. From Badakhshan and Kunduz provinces in the far northeast, to Ghazni, Logar, and Kunar provinces in eastern Afghanistan and around Kabul, to the vast province of Helmand in the south, the Taliban has carried out significant offensive actions. According to a gloomy June report from the Brookings Institution, “insecurity has significantly increased throughout the country, civilian deaths have shot up, and the Afghan security forces are taking large, and potentially unsustainable, casualties.”

Though President Obama has insisted that the rebooted global “war on terror” will take pains to avoid civilian deaths, the Kunduz bombing came just five days after another, even more extensive massacre, this one in southern Yemen. On September 28, the US-backed Saudi Arabian air force obliterated a wedding party, killing at least 131 civilians, most of them women and children. (This was followed the next week by an air strike on another wedding party, killing at least 28.) The war in Yemen, which pits a rebel force of Houthis against remnants of the deposed pro-Saudi regime that formerly ruled the country, is devolving into a proxy battle between Iran, which nominally backs the Houthis, and a US-Saudi coalition intent on using military force to restore Saudi dominance of the Arabian Peninsula. After this latest in a series of apparently indiscriminate air attacks that have killed many civilians, calls for an independent inquiry into the massacre by the UN were blocked by Saudi Arabia, with American support.

The Obama administration appears to have learned that the Middle East cannot be reordered to conform with American ideas about democracy and civil society by deploying tens or hundreds of thousands of US troops in feckless “nation-building” missions. But it has yet to grasp the related lesson that Washington cannot defeat insurgencies, even terrorism-inclined ones, by remote control via airpower, whether by drones or AC-130 gunships. Indeed, as even Donald Rumsfeld conceded in the waning days of his tenure as George W. Bush’s defense secretary, blowing up low- and mid-level insurgent commanders may well create more terrorists than it kills.

The White House should draw the conclusion from the Kunduz massacre that there won’t be a military solution to Afghanistan’s civil war. After 14 years, despite relentless US military action and the peak presence of more than 100,000 US troops, the Taliban hasn’t gone away. Since 2001, the one inescapable conclusion has been that only a power-sharing arrangement among all of Afghanistan’s factions, including the Taliban, can provide even a hope of ending the war. To get there will require diplomacy at least as intensive and prolonged as the process that led to the historic agreement between Iran and the P5+1 world powers over Tehran’s nuclear-enrichment program.

In addition, Obama should resist calls from the military and congressional Republicans to reverse his decision to withdraw US troops by the end of next year. Gen. John Campbell, the US commander in Afghanistan—whose constantly shifting explanations for the Kunduz massacre have infuriated MSF—is asking the White House to keep thousands of additional troops in the country well into 2017. And on October 5, nearly two dozen GOP House members wrote an open letter to Obama “to express concerns about the dangers of a premature drawdown of US troops in Afghanistan.”

There have been promising signs this year that the Afghan government and the Taliban might be ready to talk peace, with the parties holding several recent meetings toward that end. Last spring, China demonstrated a willingness to involve itself in brokering a deal, which could be an important step because Pakistan, the Taliban’s chief sponsor, is an erstwhile ally of China’s. Iran, showing its own readiness to reintegrate into the global polity, could be an important partner in bringing Afghanistan’s warlords and tribal chieftains to a deal. For President Obama, whose instincts seem to favor diplomacy over war, there may be an opportunity to follow the groundbreaking accord with Iran with successful negotiations in Afghanistan, too.

Editor’s note: This article has been updated and expanded.