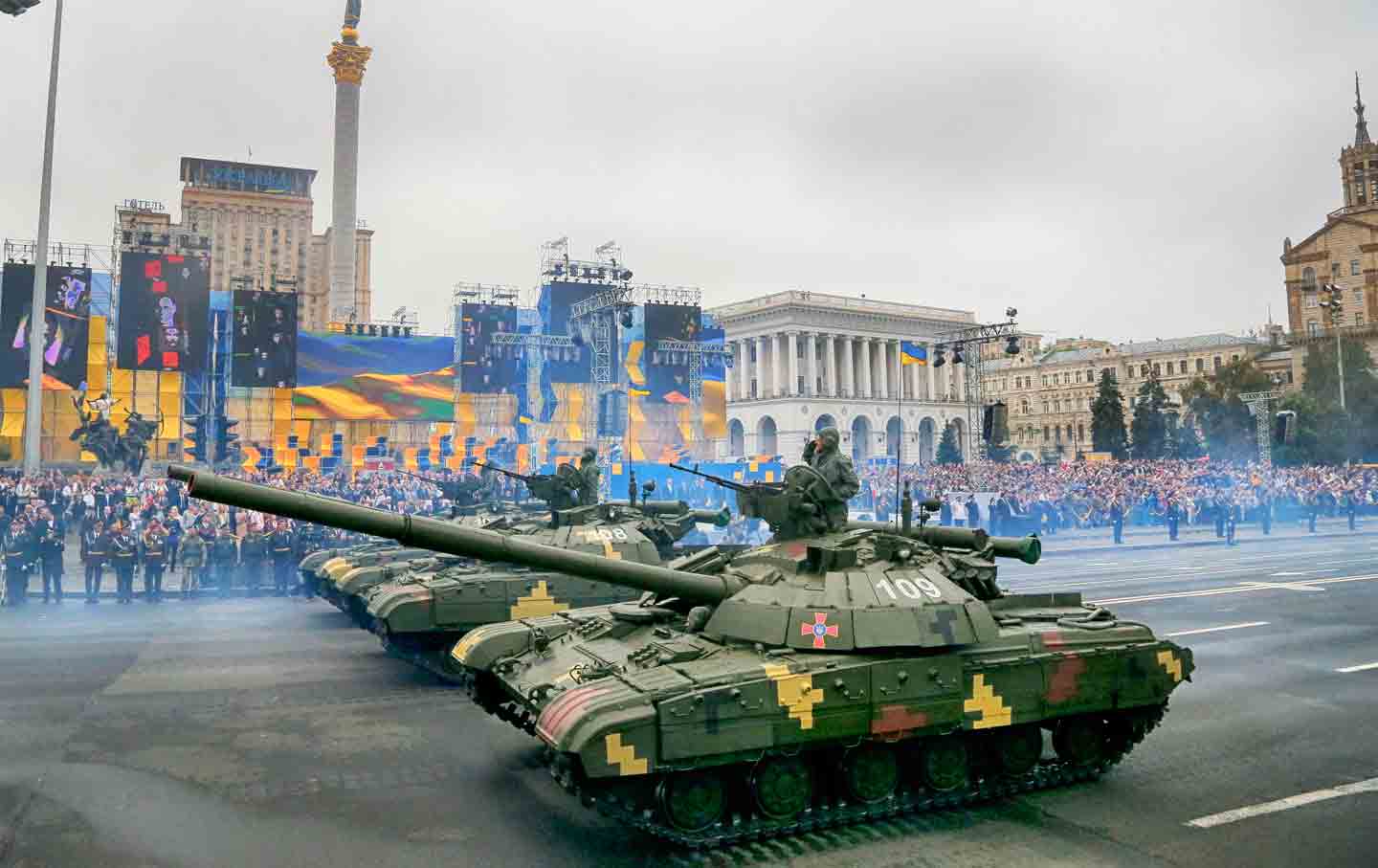 When you hear self-appointed experts on Russia banging on about how Russia is busy “weaponizing” everything from information to PhotoShop to Wikileaks to refugees to robotic cockroaches and Jedi mind tricks, one could be forgiven for wondering why the locus of their concern isn’t a bit closer to home. As opposed to these fictional charges against Russia, the actual weaponization of US foreign policy has been been continuing apace over the last several years.

Since the Obama administration took office in 2009, US weapons exports have soared, resulting in a bonanza for weapons manufacturers. As of this writing, stock prices for the defense contractors L-3 Communications (LLL), Northrop Grumman (NOC), Raytheon (RTN), General Dynamics (GD), and Lockheed Martin (LMT) are at or near their respective five-year highs. As Nation contributor and the New America Foundation’s William Hartung recently observed, in 2014, “the United States was credited with more than half the value of all global arms transfer agreements.” In 2015 alone, the United States exported nearly $23 billion in weapons and by some estimates, the Obama administration has approved over $200 billion worth of arms sales since taking office. The United States now controls anywhere between 50 to 70 percent of the global arms market.

Meanwhile, there is mounting evidence which suggests that US arms merchants are banking on a new and more dangerous cold war with Russia. As The Intercept reported last week, “Weapon makers have told investors that they are relying on tensions with Russia to fuel new business in the wake of Russian’s annexation of Crimea and modest increases in its military budget.”

Perhaps not surprisingly, the country at the forefront of the push for a new cold war with Russia—Ukraine—has, since the crisis there began in the spring of 2014, turned itself into a veritable arms bazaar. The Obama administration has repeatedly boasted that by the end of 2015, Ukraine had received upwards of $780 million in US security assistance and $2 billion in loan guarantees, while Ukraine’s President Petro Poroshenko has made no secret of his intention to divert IMF loans to fund the war effort in the east. What has resulted is that, according to a recent AP report, “Ukraine has turned into a supermarket for illegal weapons.”

It has also become the black-market exporter of choice for some of the more odious regimes on the planet. Amnesty International recently reported that Ukraine has been busy exporting weapons to South Sudan. In 2014, Ukraine sold South Sudan light and heavy machine guns, and in 2015 it authorized the further export of “an undisclosed number of operational Mi-24 attack helicopters.” Brian Wood, head of arms control at Amnesty International, condemned the arms sale, noting that “it is impossible to square Ukraine’s arms export decisions with what is happening in South Sudan where civilians sheltering is hospitals and places of worship…have been attacked and killed.”

Because the arms sale to South Sudan is in violation of the Arms Trade Treaty (ATT), which Ukraine is a signatory to, the sale is in violation of international law. But it also raises a curious question: How can a country that repeatedly claims to be in the midst of fighting back a Russian invasion of its sovereign territory possibly afford to sell weapons abroad?

In any event, it stands to reason that given the millions of dollars in US security assistance Ukraine has received over the past few years has made space for the growth of an illicit and international arms trade in Ukraine.

Meanwhile, US arms sales to the Kingdom of Saudi Arabia, which are also in violation of the ATT, have fueled bloodshed and instability in Yemen over the past year and a half. According to Amnesty, “Since March 2015, the US State Department has approved possible military sales of equipment and logistical support to Saudi Arabia worth $24 billion.” As recently as August 9, the State Department approved a $1.15 billion sale of 153 Abrams tanks, ammunition, and other weapons to the Saudi Arabia. According to the Middle East expert Mohamed Bazzi, the Obama administration “has sold more weapons to the kingdom than any previous US president.” In short, these arms sales, cheered on by defense-industry lobbyists as “good for business,” have made the United States a party to the Saudi war crimes in Yemen.

And while Senators Rand Paul and Chris Murphy have said they will try to block the most recent arms sale to Saudi Arabia, the administration should be called upon by the Congress and public to adhere to its own stated policy on arms exports. Released in January 2014, Presidential Policy Directive 27 consists of a series of 13 policy guidelines that apply to US arms sales to foreign buyers, including:

5. Promoting regional stability, peaceful conflict resolution, and arms control;
6. Preventing the proliferation of conventional weapons that could be used as delivery systems for weapons of mass destruction;

10. Ensuring that arms transfers do not contribute to human rights violations or violations of international humanitarian law.

Arms sales and “security assistance”—which fuel civil conflicts, war crimes, and regional instability—directly contravene the administration’s own guidelines. It is long past time for the administration and the defense industry to be held to account.