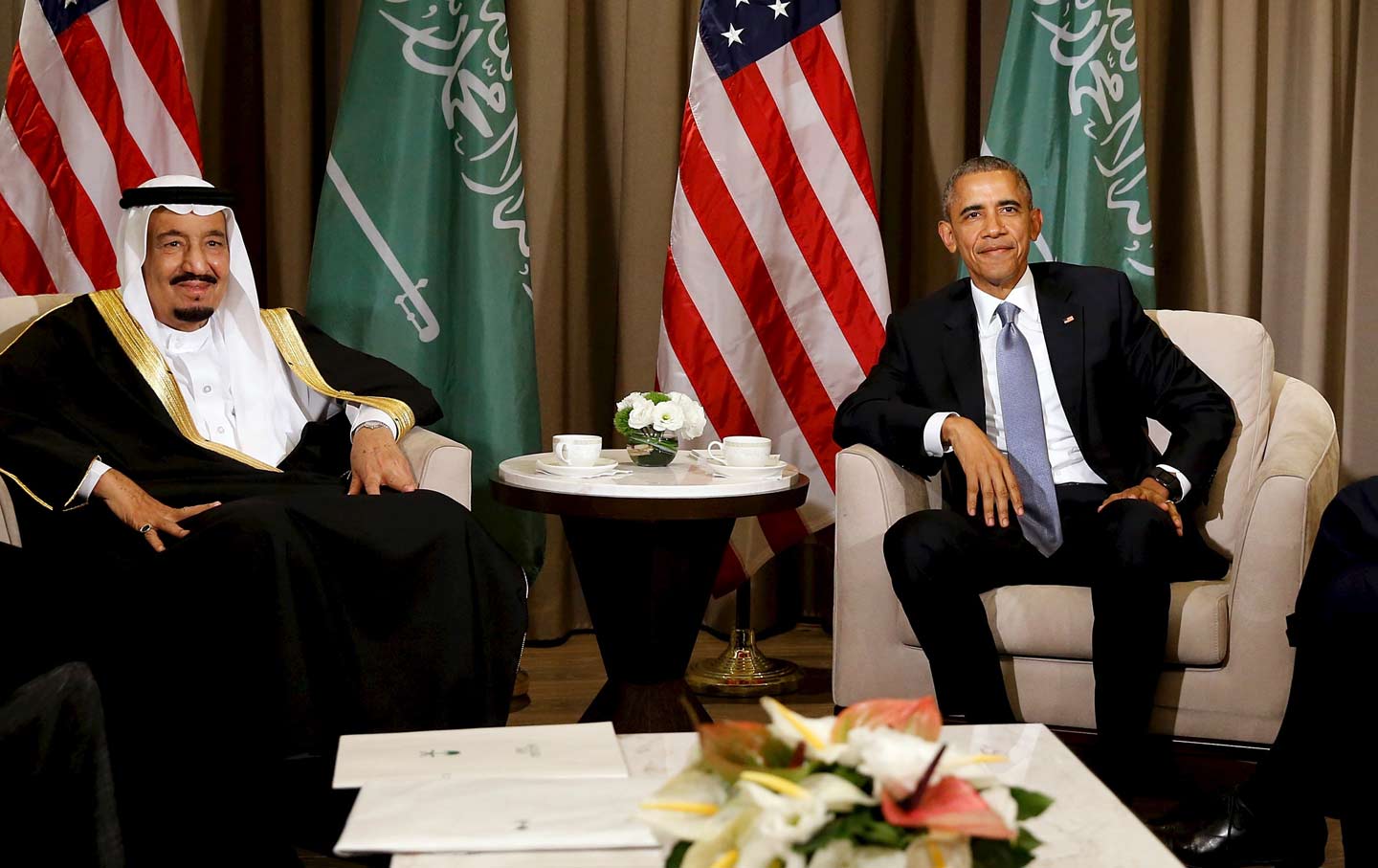 This Sunday’s New York Times featured an in-depth account of the secret CIA operation to arm and train the so-called “moderate” Syrian rebels that was authorized by President Obama in the spring of 2013. In showing the extent of the financial, tactical, and strategic cooperation between the CIA and the Kingdom of Saudi Arabia (KSA), the piece highlights one of the more serious problems with this, the latest in a long series of Washington’s “splendid little wars.”

In helping to carry out the geopolitical imperatives of the KSA in toppling Syrian President Bashar al-Assad, the United States now finds itself firmly on one side of the Sunni-Shia schism, where it has no business being. The Times article states that “from the moment the C.I.A. operation was started, Saudi money supported it” and that “estimates have put the total cost of the arming and training effort at several billion dollars.”

That the United States is actively advancing the KSA’s overarching geostrategic goal of a Sunni-dominated Near East is only one of several problems with the CIA’s three-year effort to topple Assad. A January 12 House Armed Services Committee hearing on Syria and Iraq inadvertently pointed to a number of others.

The hearing featured the allegedly “outside views” of former acting CIA director Mike Morell, former under-secretary of defense for intelligence Michael Vickers, and former US ambassador to Syria Robert Ford. Leave aside the absurdity of labeling these witnesses as bearers of “outside” opinion and focus on what these longtime Washington insiders had to say about US operations in Syria.

Vickers told the committee “we need to reinvigorate our efforts to remove Assad from power” and “significantly intensify our operations” there. Vickers also told the committee that the United States should increase “coalition support, both qualitative and quantitative, for the moderate Syrian opposition,” adding that “it is not too late to decisively support the opposition.”

Likewise, the former ambassador to Syria, Robert Ford, called for increased support for the “Syria opposition” and for the “removal of Bashar al-Assad at some point.” It is interesting how “outside views” such as those of Vickers and Ford are also remarkably uniform.

Yet one consistent dissenter from the prevailing Beltway consensus regarding Syria has been Hawaii Democrat Tulsi Gabbard. At the aforementioned hearing, Gabbard pointed out that “the US is ignoring the fact that the most effective fighting forces” within the Syrian opposition are, according to Gabbard, Al Qaeda, the Nusra Front, and other Islamic extremist groups. Gabbard wondered why the United States is waging two “contradictory wars”: one to overthrow Assad and another to defeat ISIS.

It is this counterproductive posture in Syria that Gabbard has set out to stop by introducing legislation that would put an end to CIA operations to overthrow Assad. The bill (HR 4108) would prohibit  the “expenditure of funds available to the Central Intelligence Agency, the Department of Defense, [or] any other U.S. agency” to provide “training, equipment, supplies, stipends…to any element of the Syrian opposition” that are “seeking to overthrow the government of the Syrian Arab Republic.”

And if what former acting CIA director Mike Morell told the Armed Services Committee on January 12 is true—“we have not faced the likes” of ISIS before—then the Gabbard measure makes a great deal of sense.

Indeed, a Congressional source familiar with Gabbard’s thinking on the matter told The Nation that the bill reflects the Congresswoman’s concerns that “removing Assad from power will strengthen our enemies, commit the United States to another costly and lengthy nation-building effort and possibly drag the United States into a direct conflict with Russia.”

Gabbard also realizes that the current CIA operation is both illegal and counterproductive. It is illegal because it is being carried out in the absence of either congressional or UN sanction. It is counterproductive for the relatively straightforward reason that the effort to overthrow Assad plays directly into the hands of Islamic extremist groups by arming, funding, and training them.

As Gabbard herself has noted, even if the current policy of overthrowing Assad is successful, it “would obligate the United States to spend trillions of dollars and the lives of American service members in the futile effort to create a new Syria.”

These are not abstract issues for the Hawaii Democrat. A two-tour veteran of the Iraq war, Gabbard’s first deployment was with a medical unit, where she witnessed firsthand the costs borne by American combat troops. As such, Gabbard’s voice on issues of war and peace is a uniquely credible one on Capitol Hill, where her bill has attracted positive notice from both progressive and conservative members of the House. So far the bill has attracted three Republican co-sponsors: Scott Austin of Georgia, Walter Jones of North Carolina, and Thomas Massie of Kentucky. A companion bill in the Senate may not be far off.

This coming Friday, talks aimed at ending the five-year-long Syrian civil war will commence in Geneva. According to UN Syria Envoy Staffan De Mistura, the initial goal of the talks will be to achieve “a broad cease-fire.” Yet until such time as the much-hoped-for cease-fire materializes, the passage of the Gabbard bill remains imperative and deserves wide bipartisan support.