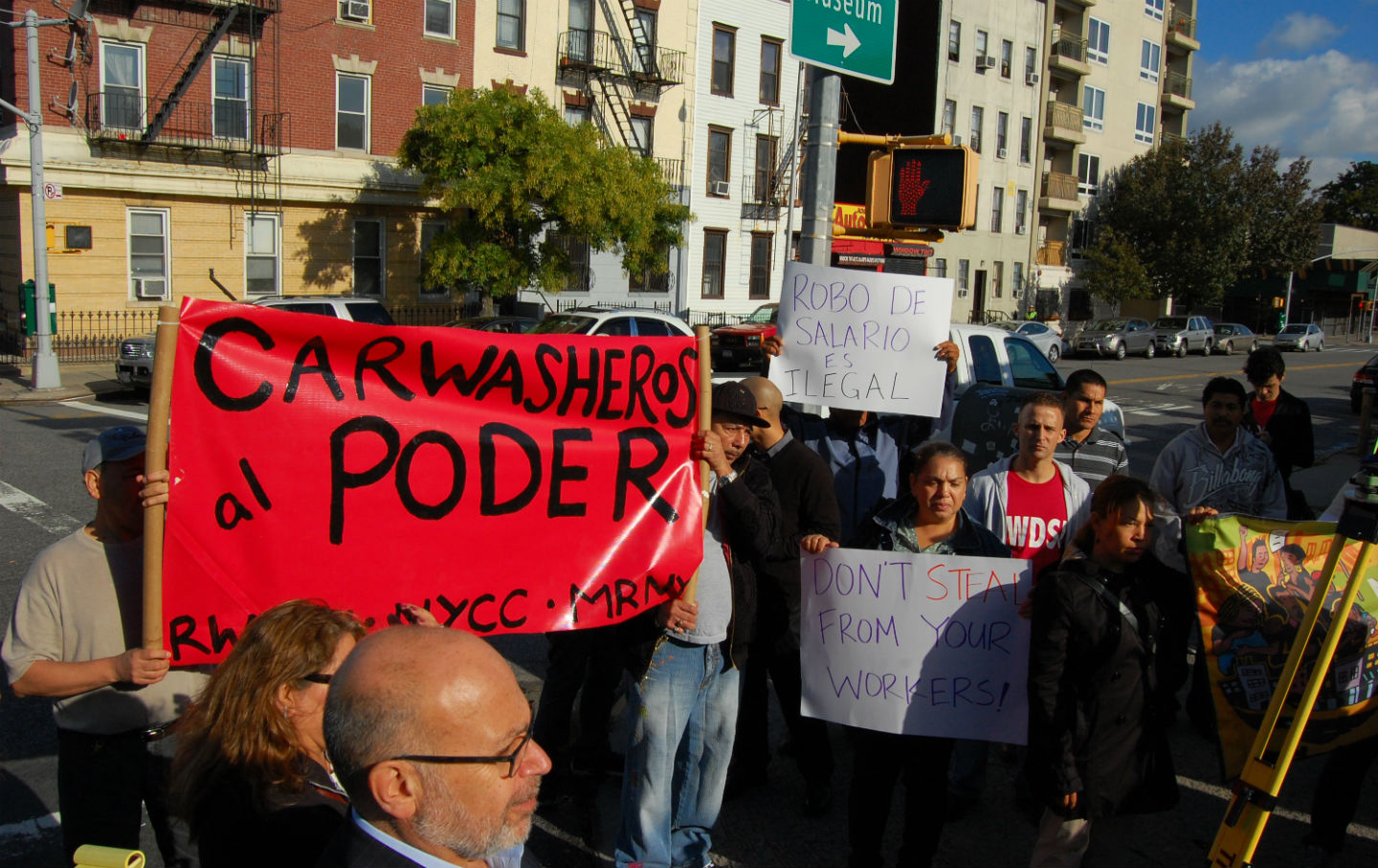 Watching the presidential campaign news cycle, you might get the odd feeling that “majority rules” doesn’t mean much in American politics. The same might be said for the union representation system: Even in miserable, abusive workplaces, workers are reluctant or too intimidated to challenge the boss. So, as with many hollow democracies, the silent majority is ruled by the tyranny of a corporate minority. Recently, “right to work” legislation and attacks on public-sector unions have further weakened labor by gutting the “closed shop” structure, which supports union finances through worker fees.

How can unions escape the downward spiral of a weakening majoritarian system within a shrinking unionized workforce? Enter the members-only (MO) union, which the think tank Century Foundation calls the minoritarian answer to the silent workplace majority: compensating for lack of quantity with high-quality organizing.

A members-only union is by definition less powerful than a full-fledged union: It represents a minority of workers on a voluntary basis, “rather than including all workers in the bargaining unit,” and “does not have to provide non-member employees with any services.” It cannot collect mandatory fees nor compel an employer to negotiate a workplace-wide contract. It can, however, unite workers to take collective action, with surprising flexibility that may sometimes outweigh the constraints.

TCF’s study explores how such quasi-unions can form a solid vocal minority. Drawing on examples of established MO unions across the country, which collectively hold tens of thousands of “minority” members, the report argues that these structures offer a form of democratic representation even without majority clout, forming a potential seedbed for grassroots worker activism.

While bosses may exclude mini-unions from the negotiating table, on the shop floor MO unions can help workers file grievances, campaign publicly to shame an employer into paying higher wages, or coordinate a discrimination lawsuit or lobbying campaign for a living-wage ordinance.

Similar non-union worker groups have cropped up in recent years in the form of worker centers, which have led successful campaigns for historically non-union, immigrant-based sectors, like restaurant staff, domestic workers, cabbies, and carwashers. Some larger formations like the Restaurant Opportunities Center have galvanized community-based campaigns for better wages, or more niche issues like local paid-sick-days laws, or targeting an employer with a wage-theft claim.

The MO union takes this model a step further, according to the report, by establishing itself as a labor organization more formally, perhaps collecting modest dues to support bread-and-butter services like legal aid or insurance. The American Federation of Teachers’ members-only unions, with some 120,000 members nationwide, provide occupational liability insurance, for example.

As for collective bargaining, report co-author Moshe Marvit tells The Nation, “The question of whether members-only unions have bargaining rights has never been answered” in National Labor Relations Board (NLRB) case law, so a future case could overturn the older precedent on bargaining rights.

As labor scholar Catherine Fisk contends in The American Prospect, the NLRB could “relax the requirement of exclusive representation” to expand the organizing latitude and collective bargaining rights of small-scale unions that “represent only those workers who affirmatively choose to become members.” Formerly unrepresented workers could then gain a new avenue for negotiating power with management, albeit on a limited scale.

And while they can’t force a boss to negotiate a contract, MO unions can nonetheless educate coworkers on how to negotiate on their own for better individual contracts or workplace rules. When workers operate “at the upper end of the minority model versus the lower end of the majority model,” Marvit says, at least some can engage in communal political expression, rather than zero representation at a totally union-free firm.

Many workers see intangible benefits in the workplace culture, Marvit says, in which workers view unionism “as just a solidarity issue, where they felt that just the very existence of the members-only union [makes] the workplace better,” in part because the manager would be wary of upsetting an organized subgroup of the workforce. The workplace climate change—which buffers against a precarious economy fraught with temp gigs and rapid turnover—helps anchor workers through collective consciousness and institutional permanency, which might one day translate into a real majority.

These principles are highlighted in the Fight for $15 movement, the SEIU-backed grassroots campaign that has marshaled thousands of low-wage workers in fast food, childcare services, and other traditionally non-unionized industries to push for higher wages and union representation. While the effort is union-supported, it mobilizes largely through grassroots organizing and media-driven campaigns, while avoiding the bureaucratic, often easily corrupted NLRB process.

As unions seek to build power in hostile states, including those with right-to-work laws or policies curtailing public-sector collective bargaining, Marvit says, they might find it effective to follow a parallel track of organizing to establish MO unions that can be quickly set up with minority contingents at, say, an auto factory in Chattanooga, “and just keep that local active…and there’s a lot to be gained for the unions that way.”

The more ad-hoc members-only model actually predates the current NLRB system and 1935 Wagner Act, which ultimately institutionalized the labor movement through the electoral apparatus—a process that many activist now see as sclerotic and devoid of rank-and-file spirit.

The report highlights case studies of MO unions, displaying both their advantages and setbacks. The United Electrical Workers–affiliated CAAMWU has scored significant gains for workers through petitions which “allow them to present issues important to them en masse, while still retaining the protections of the NLRA.”

The Texas Workers Alliance, representing public school staff in San Antonio, “has successfully filed group grievances on issues as diverse as shift scheduling, air conditioning in the workplace,” and overall scheduling and promotion policies. However, the union has struggled to sustain itself with fluctuating membership and unstable finances.

If it can meet the challenge of keeping members engaged and militant, a nimble minority can be a sharp weapon against the right-to-work movement’s war of attrition, helping workers stay ahead of management’s attacks. As TCF argues: one benefit of members-only is that the model “does not have a process that is particularly easy to target…. it is much harder to undermine it or put consistent pressure on it for years at a time.”

In workplace power struggles, the embattled labor movement can take nothing for granted. By playing an outside game, they can get better at making do with what they’ve got.