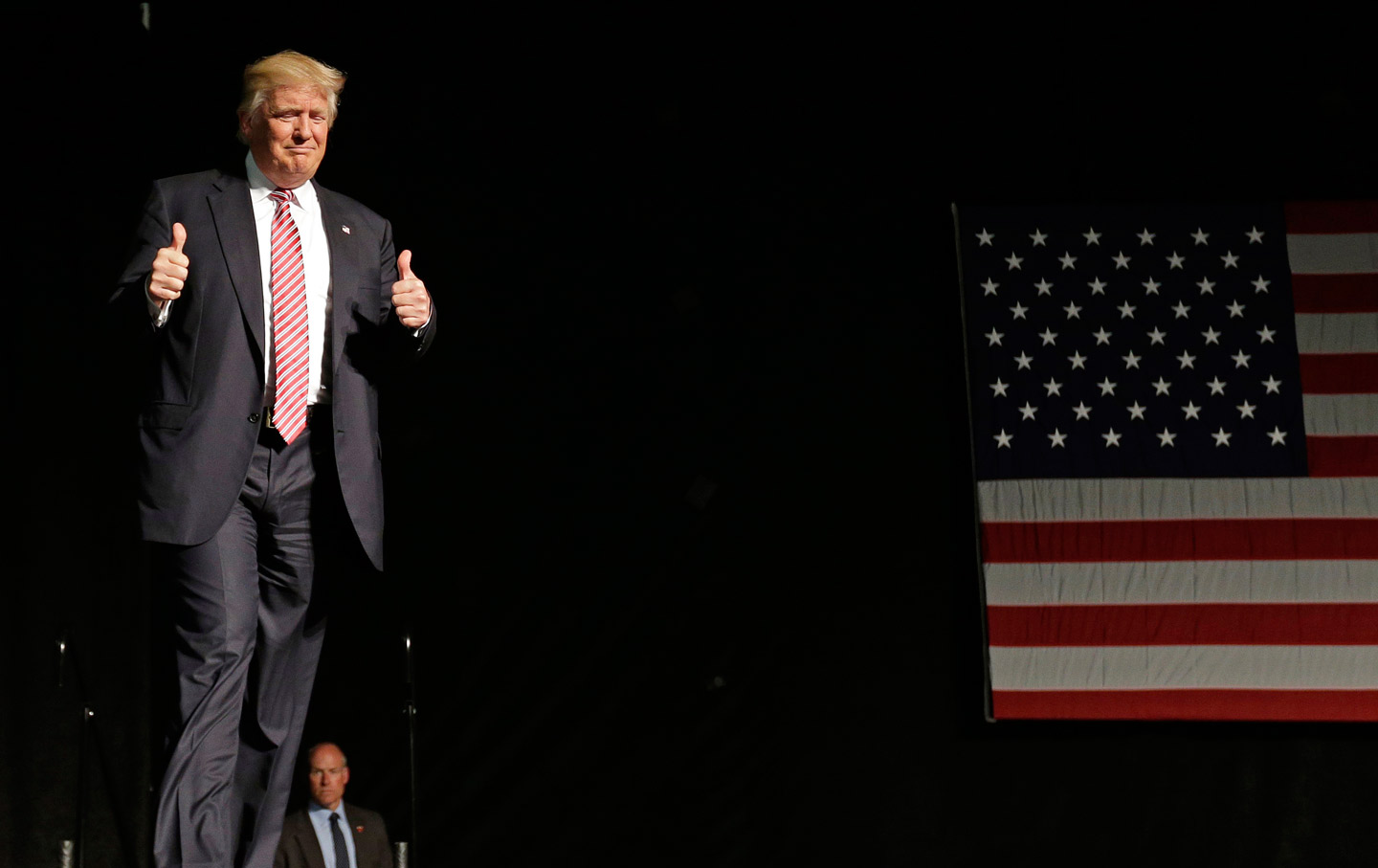 Once upon a time, when media institutions felt the need to kowtow to conservative pressure, they did so quietly. Whether they thought a rightward tilt would earn them more money, or quiet the baying hounds who constantly “worked the refs” from the right-wing sidelines, the media would always pretend that nothing had changed. Today, however, many media outlets—particularly the cable-news channels—announce the move with pride. And I don’t mean Fox News, whose bias has been transparent from day one. I mean MSNBC and CNN.

MSNBC, the network that used to “Lean Forward,” is now running advertisements with the half-joking tagline “People might start accusing us of leaning too far to the right.” And on May 1, CNN president Jeff Zucker told reporters from The Wall Street Journal that the network had been “a little too liberal,” but that it had added “many more middle-of-the-road conservative voices” to make it a “much more inviting network to a segment of the audience that might not have otherwise been willing to come here” (in other words, Fox viewers).

Ironically, this naked pandering by the cable networks comes at a time when conservatives themselves are in crisis.

Ironically, this naked pandering comes at a time when conservatives themselves are in crisis, having lost their party to someone who is far less subtle in his racist dog whistles and contempt for truth than are typical conservatives. But what’s bad for the party—and for the apparatchiks who parrot its talking points on television—has been manna for the cable networks. Ratings are up 73 percent at MSNBC and through the roof at CNN. According to the Journal, after the first Trump-dominated Republican debate last summer, CNN increased its advertising rates by “roughly 40 times its usual prime-time price, and continued to raise prices across its schedule as interest in the election escalated.” The network has more than doubled its prime-time audience among its target demographic of 25 to 54-year-olds.

No one would dispute that MSNBC had a  center-left orientation before its executives decided to “rebrand” the network last year. Its rush to the right at least has the virtue of honesty, if not courage or conviction. It would be a stretch, however, to label CNN as “a little too liberal.” My curiosity piqued, I sent a list of questions for Zucker to Allison Gollust, his PR rep. I asked him what evidence he had in mind, whether he was responding to viewer complaints or to the those of others, whom he considered “middle-of-the-road conservative voices,” and how he defined “liberal.”

Alas, neither Gollust nor Zucker would even deign to acknowledge my questions until, on my third try, I cc’d Gary Ginsberg, Time Warner’s executive vice president in charge of communications, a social acquaintance. At that point, Gollust confirmed that, yes, my questions were being intentionally ignored. Even without the answers, though, one can reasonably infer that Zucker believes the network will be “more inviting” if it gives more airtime to people like GOP operative and Trump partisan Jeffrey Lord. In a recent debate with CNN commentator Van Jones regarding Gonzalo Curiel, the American-born District Court judge of Mexican descent who’s presiding over the Trump University case, Lord attacked everyone who had “bought into this whole notion of identity politics” and had therefore “sold out on race.” Trump, he implied, was protecting the country from a “judiciary that is infected by racial politics.” When Lord’s strange colloquy inspired Jones to ask whether he thought Trump had “ever said anything about race that’s wrong,”  Lord asserted that Trump “hasn’t said that much about race.”

The cable networks’ insatiable appetite for hot takes lends credence to the complaint by The Washington Post’s Paul Farhi that “there are now so many cable pundits—CNN has about 100 on its payroll, while MSNBC and Fox News declined to provide numbers—that it’s hard to tell them apart.” Farhi notes that over one eight-day period, 12 pundits appeared on all three cable networks, while 29 showed up on both MSNBC and CNN. Meanwhile, Mark Halperin—another pundit who defended Trump against the racism charge, and who once called President Obama “a dick” on the air—was called upon by MSNBC for his sage analysis 23 times.

The only rule on cable these days appears to be that the crazier and more irresponsible the commentary, the more airtime its gets. MSNBC’s advertisements brag that the network recently hired Hugh Hewitt, a right-wing radio host whose record of spewing misinformation rivals that of the world champion, William Kristol. Last fall, Republican leaders essentially blackmailed CNN into including Hewitt as a debate moderator, refusing to green-light the broadcast unless he shared the stage with the likes of scary old Wolf Blitzer. Hewitt distinguished himself by asking Ben Carson whether he was sufficiently presidential to “order air strikes that would kill innocent children by not the scores, but the hundreds and the thousands?” When Carson answered in his own inscrutable fashion, Hewitt simply restated the question. In a question to former Arkansas governor Mike Huckabee, Hewitt also declared that the Obama administration has “effectively undermined our friends and emboldened our foes.” And earlier this year, speaking to ABC’s George Stephanopoulos, Hewitt insisted that Hillary Clinton had committed a felony when she allegedly directed an aide “to alter and send” classified information “over a non-secure system.” But as other analysts and observers have argued, there was no evidence that this had ever taken place, much less that it would have constituted a crime.

In their eagerness to capitalize on Trump’s ability to attract viewers, the cable networks are playing right into his hands. Trump clearly thrives on a news culture in which strong assertions take precedence over fact. By adjusting their coverage and commentary in order to court his followers, CNN and MSNBC are not merely sacrificing their credibility. They’re also giving Trump exactly what he needs: endless validation.