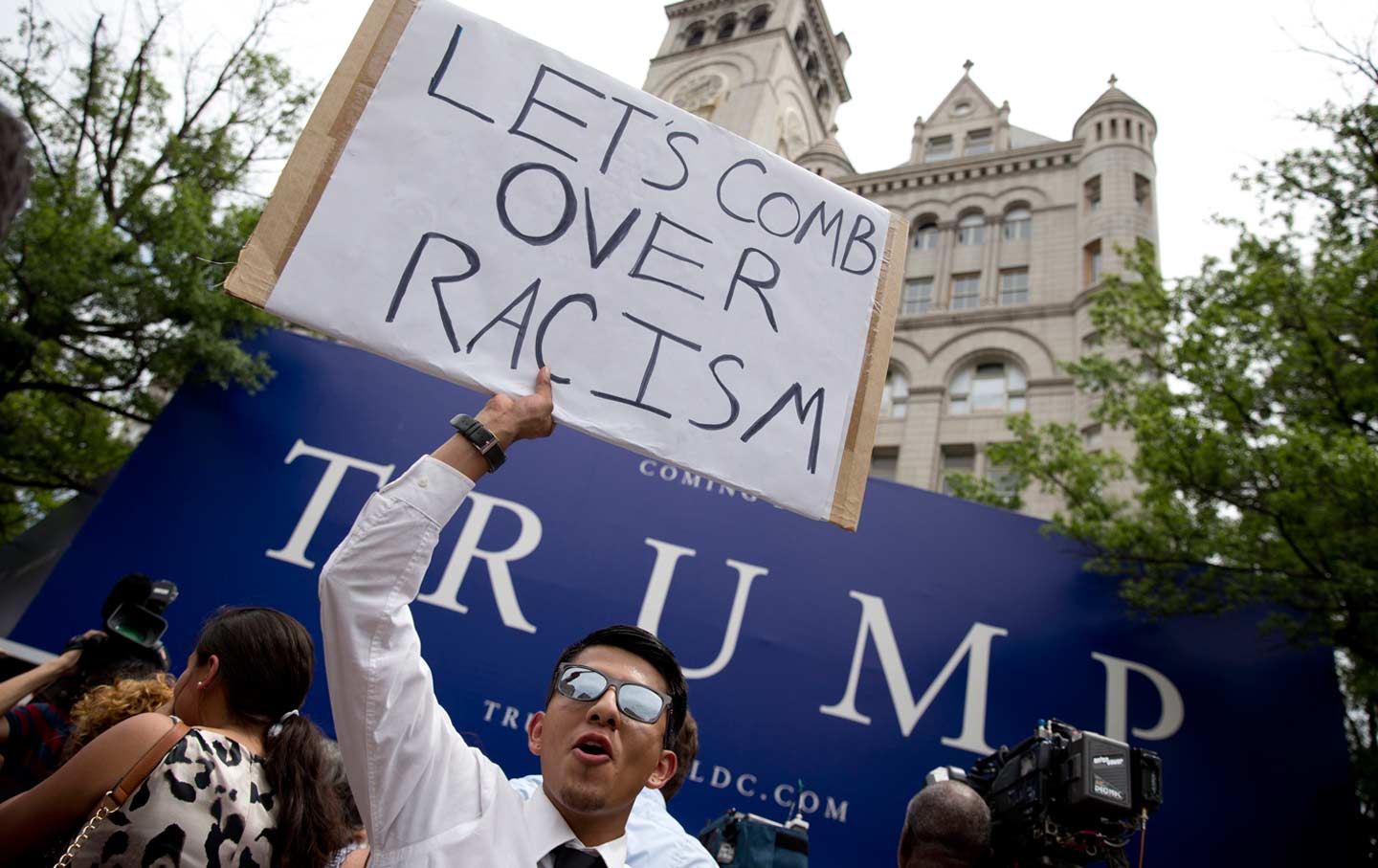 Behind the curtain of the Donald Trump campaign, there’s an anti-immigrant, anti-Muslim movement. When the dust settles on the campaign trail, there will be many Trumps left standing, from his opponents, inspired to talk like him, to the base he’s riled up. Trump, the candidate, will win or lose. What’s the answer to Trump, the movement?

In this post, contributors offer three possible answers. Together, they represent and reflect an immigrant youth groundswell that has brought visions of a border-free society into the national spotlight. This post is the latest edition of The Nation’s youth organizing feature, edited by James Cersonsky (@cersonsky). For more, check out February 2.

Who “Deserves” Not to Be Deported?

After the July 2015 shooting of Kate Steinle by Juan Francisco Lopez-Sanchez, an undocumented immigrant, San Francisco was under a magnifying glass—thanks to politicians across the spectrum who exploited the issue for personal gain. “This senseless and totally preventable act of violence committed by an illegal immigrant is yet another example of why we must secure our border immediately,” said Donald Trump, then only a few weeks into his campaign. Diane Feinstein and Barbara Boxer, California’s Democratic senators, attacked sanctuary cities and called for legislation requiring local law enforcement to communicate with ICE.

To counter the scapegoating of undocumented immigrants, the FREE SF Coalition formed the #ICEoutofSF campaign. This campaign is part of a statewide effort, ICE out of CA, to disentangle local law enforcement and ICE—the opposite of what elected officials from both parties are demanding. Together, we are organizing to highlight the human costs of ICE’s unconstitutional practices and shine a light on the complicity of local sheriffs.

Nationwide, ICE has a mandate of some 35,000 beds to fill, giving it an incentive to detain anyone, regardless of individual circumstances. ICE does not act upon judicial warrants, but targets individuals with the help of “guidelines” from the Department of Homeland Security. In the process, the Fourth Amendment rights of undocumented people to be safe inside their homes are frequently violated. ICE is supported by the Priority Enforcement Program, the Obama administration’s rebranding of its discredited “Secure Communities.” PEP and S-COMM work similarly: Under S-COMM, local law enforcement would hold individuals for ICE to pick up; under PEP, locales “notify” ICE when an individual is being released instead. These “notifications” involve raids outside of jails, courts, and people’s homes.

In one of many such examples, Immigrant Youth Coalition organizer Yadira Sanchez had her grandfather taken into ICE custody and almost deported. ICE showed up at her parents’ home looking for a man with a name similar to her grandfather’s. Although the names were different, they detained him, and, in less than 24 hours, he was on a bus to the border. It took the family several hours to locate him. Before they did, ICE did not respond to questions from the family or its attorneys, all of whom were desperately trying to understand what was happening. Ultimately, we were able to direct such a high volume of calls to the Los Angeles ICE Field Office that ICE decided to turn the van around and release him.

Although we are glad that Yadira’s abuelito was not deported, no one should ever have to experience such a traumatic event, let alone in the name of “public safety.” Yadira was grateful to have a network of support. Unfortunately, the others in her abuelito’s van weren’t so lucky, and no one will hear their stories.

By Zana Alattar and Dina Jaber, Students Organize for Syria

As Syrian-Americans, we have witnessed the crisis in Syria with difficulty. The people fighting for their lives could have been us if our parents had not fled the country 20 years ago.

On March 15, 2011, the Syrian people broke a 40-year period of fear when they took to the streets for democracy and human rights. They were met with extreme brutality and, since then, have faced unimaginable death, destruction, and loss. Thousands of miles away, their demands for human rights and justice have resonated with students in the United States. At Arizona State University, student activism became the platform for a national initiative: Students Organize for Syria.

Since 2014, SOS has brought together students from across the United States, from all backgrounds, to support Syrians’ struggle for freedom and human rights by taking direct action, educating our peers, and providing mutual aid to Syrian students.

SOS has led a number of campaigns and grown quickly, with chapters at 19 universities. Through #RefugeesWelcome , we’ve written op-eds in local and campus newspapers, held rallies and vigils, and educated our communities on the problems with the refugee vetting process. On October 9, SOS allied with the Syrian American Medical Society for #Advocate4Syria , lobbying Congress to resettle 100,000 Syrian refugees by 2016 and take actions to protect civilians in Syria.

We have also organized different forms of aid. In December, as part of our annual Mustache Campaign, 13 teams mobilized to raise over $100,000 for winter supplies and education for Syrian refugees. Through our Paper Airplanes campaign, we are connecting Syrian students with their American counterparts, who provide English tutoring once a week via Skype. At least 3.3 million Syrians have been forced out of school because of aerial bombardment—making it crucial to find other means of education. And on February 1, we partnered with STAND on Books Not Bombs.” In this campaign, we are petitioning our schools to create scholarships for Syrian refugee students who would otherwise not be able to pursue higher education. In the first two weeks, we gathered more than 4,600 signatures, which collectively target 121 universities. This campaign also serves as a platform to increase student engagement with the Syrian crisis and to educate students about the world’s worst humanitarian crisis since World War II.

As Syrian-Americans, the memories of Syria—faint smells of Damascus jasmine, cyprus trees, and Arabian musk—will never fade from our minds or hearts. As members of the larger student community, we see that the crisis in Syria is not for Syrian-Americans alone to address, but for all of us.

By Jasmine Bonola and Kathleen Mora, United We Dream

Growing up Mexican-American hasn’t been easy, but it has made us aware. Our parents’ shared struggles being undocumented in rural North Carolina made us instant best friends. We’ve fought injustice from the beginning of our freshmen year in high school, when we realized our classmates could not take drivers’ education courses because they were undocumented.

When Donald Trump threatened and insulted our friends and families, we were not going to keep quiet. The moment we heard that Trump was going to hold a rally in Raleigh, we prepared to tell him that neither he nor his hateful speech were welcome in our state. We were aware of how protesters were treated at these rallies, and we prepared accordingly. The night before, we practiced every possible outcome, from light aggression to full-on physical assault; we focused on remaining calm and non-aggressive. We braided our hair to make it harder to pull. We walked into the Dorton Arena preparing for the worst.

While we stood in a sea of Trump supporters, listening to them scream as if they were watching their favorite team play, we were nervous, hearts pounding, blood pumping. When the time came, we pulled out our little red signs and screamed at the top of our lungs, “Stop the hate, we make America great!” Seconds after we began, the attack started. Our signs got ripped away, we got shoved by everyone around us, and women who were being kind to us before called us names and got in our faces. An older gentleman approached us and put his sweater around our faces as if he were trying to suffocate us. Security rushed in, and we were kicked out.

As we walked out of Dorton Arena, we hugged and cried—not because we were sad, but because we had sent a message on behalf of thousands of members of our community. On the way to our rides, we discovered a protest at the entrance to the arena, and we joined it. There, we met other activists who had come to disrupt Trump as well—an emotional, but reassuring, moment. Together, we are a community that is ready to defend itself in the face of white-supremacist, anti-immigrant voices.

In the fall, we took to the streets against HB 318, a law that targets undocumented immigrants and the poor by requiring the police to cooperate with immigration authorities, implementing “E-Verify” for state workers, restricting forms of acceptable identification, and cutting access to SNAP benefits. Since then, we have mobilized to provide alternate identification for people who do not have state-supported IDs, and we have spoken to council members in our cities to persuade them to embrace our immigrant communities. As November approaches, we are approaching eligible community members to register to vote, educating them about the importance of making our voices heard. The Latino vote isn’t just about numbers—it’s about showing that we take our opposition, and our power, seriously.