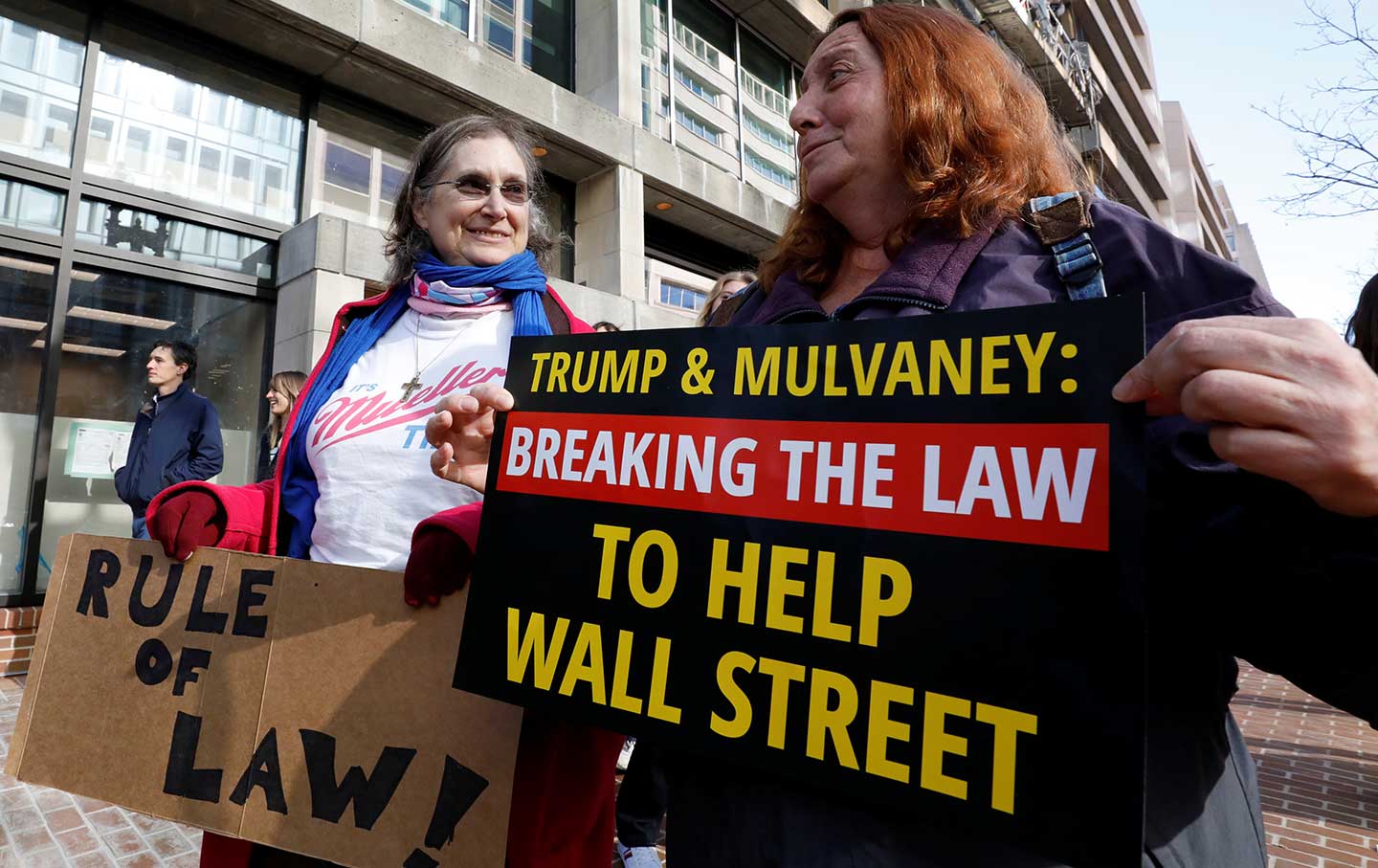 January 16 was supposed to be the day of reckoning for a notorious predatory-lending industry, when a rule from the Obama administration’s consumer-watchdog agency would finally start to curb a business that’s fleecing the poor. But the day the new regulation was set to kick in, the Trump White House’s newly appointed head of the agency decided to suspend the rule indefinitely, and soon announced a “review” of all agency operations, signaling a shift in mission from protecting Main Street to coddling Wall Street.

Last year the Consumer Financial Protection Bureau (CFPB) crafted a long-awaited rule on payday lending—the industry offering short-term loans that exploit poor consumers—to clamp down on fraud by forcing lenders to “reasonably determine that the consumer has the ability to repay the loan” (rather than defaulting or submitting to even more exploitative terms). The rule, spearheaded by the Obama administration and widely supported by consumer and public-interest groups, allowed exemptions for smaller-scale loans by requiring lenders to follow certain consumer-protection provisions rather than go through the “ability-to-pay” determination.

The rule would also target longer-term loans with a 36 percent yearly interest rate or higher, restricting lenders from directly extracting money from the consumer’s account, without the borrower’s explicit consent, if they failed to repay twice in a row. Any direct withdrawal from a consumer’s account would also require standard prior notification. The commonsense rule was projected to reduce the industry’s yearly revenue by two-thirds.

The suspension of the rule signals a new direction for the CFPB, which is now headed by Mick Mulvaney, a longtime Trump crony and eminent Wall Street warrior who has a record of fiercely protecting financiers, not consumers. Mulvaney immediately followed the rule’s suppression by launching an internal review of the agency, which watchdog groups see as another step toward reversal of the agency’s founding mission. Paralleling Trump’s anti-Obama vendetta, Mulvaney is poised to dismantle the agency’s regulatory framework, which prior to his tenure aimed at promoting modest but meaningful limits on the financial industry’s exploitative power. And his first move is fittingly to roll back a major instrument of fraud and usury that’s aimed at the poorest consumers.

According to Amy Traub of the think tank Demos, “many advocates are worried that it’s the beginning of a larger effort to undo the CFPB’s successful work of protecting consumers.” The payday-lending sector has historically preyed on poor, “underbanked” communities, marketing short-term loans at astronomically high interest rates. Payday loans trade on exploitative debt schemes, as borrowers spiral into a deepening cycle of repeated over-borrowing and financial crisis. Historically, the industry has disproportionately targeted consumers who are extremely poor, black, recently divorced or separated, and renting their housing.

The “checks cashed” storefronts that line the main drags of poor communities across the country are largely linked to large banking monopolies, sucking assets from poor communities to pad multinational capital flows. According to the Center for Responsible Lending (CRL), average interest rates for payday loans are nearly 400 percent APR. The CFPB’s rule was long overdue, after five years of deliberations in rulemaking, during which the financial-industry lobbyists complained that it would ruin a system that was the only pathway to credit for 30 million consumers. But activists say that, instead of being “served” with deceptive financial predation, underbanked communities really need sustainable financial infrastructures that provide transparent, ethical loans that are structured for repayment, not usury. Many community groups have been promoting nonprofit credit unions and other community-based banking institutions, such as government-run public banks and postal banking, that allow poor households to build assets on equitable terms, and are trying to set new industry standards based on fair-lending principles.

The rule was fairly limited, compared with stricter regulations many states have adopted. The CFPB only required lenders to conduct “reasonable” checks on consumers’ financial capacity and avoid the worst forms of financial abuse. Currently, about 38 states allow for some form of payday lending, but some, like New York, New Jersey, North Carolina, and Arizona, have banned or limited the practice.

Traub emphasizes that stronger state-level regulations will remain in place, as a repeal of the federal rule would not automatically preempt existing state and local regulations. Then again, many advocates are worried that the industry will now double down on their ongoing battle to weaken state-level protections.

“If this legislative session is like last session, payday lenders will likely be pushing more of their dangerous bills in more states,” said CRL’s State Policy Director Diane Standaert in a statement. “States, just as they all did last year, must reject these efforts by the payday lenders to increase the types of the predatory products they’re peddling” by enacting and maintaining existing rate caps.

While the Trump rollback of the rule is an obvious direct attack on the regulation, it is predictable. Mulvaney—who received over $62,000 in political contributions from the payday-lending industry in past positions and whose appointment faces an ongoing legal challenge in court by his Obama-selected predecessor—raked in thousands in contributions just around the same time he issued a letter of protest to the Obama administration in 2016, warning that curbing payday lenders would unfairly limit “access to credit” for poor borrowers. He also opposed legislation to protect households at military bases from predatory lenders.

The exponential growth of payday lending over the past few decades can be traced back to federal financial deregulation in the 1970s and 1980s. The very reason Trump installed Mulvaney…is because he is a de-regulator…. At the very least, this latest move is yet another wink and nod to financial predators that it’s open season on poor people, working families, and communities of color.

The Trump administration’s deregulatory mania is proceeding so quickly it’s sometimes tough to keep track of. Mulvaney is just another foot soldier for Trump’s ideological agenda, part of an ongoing campaign to dismantle regulations and defund agencies as a way of attacking financial safeguards, civil rights, and labor protections across government.