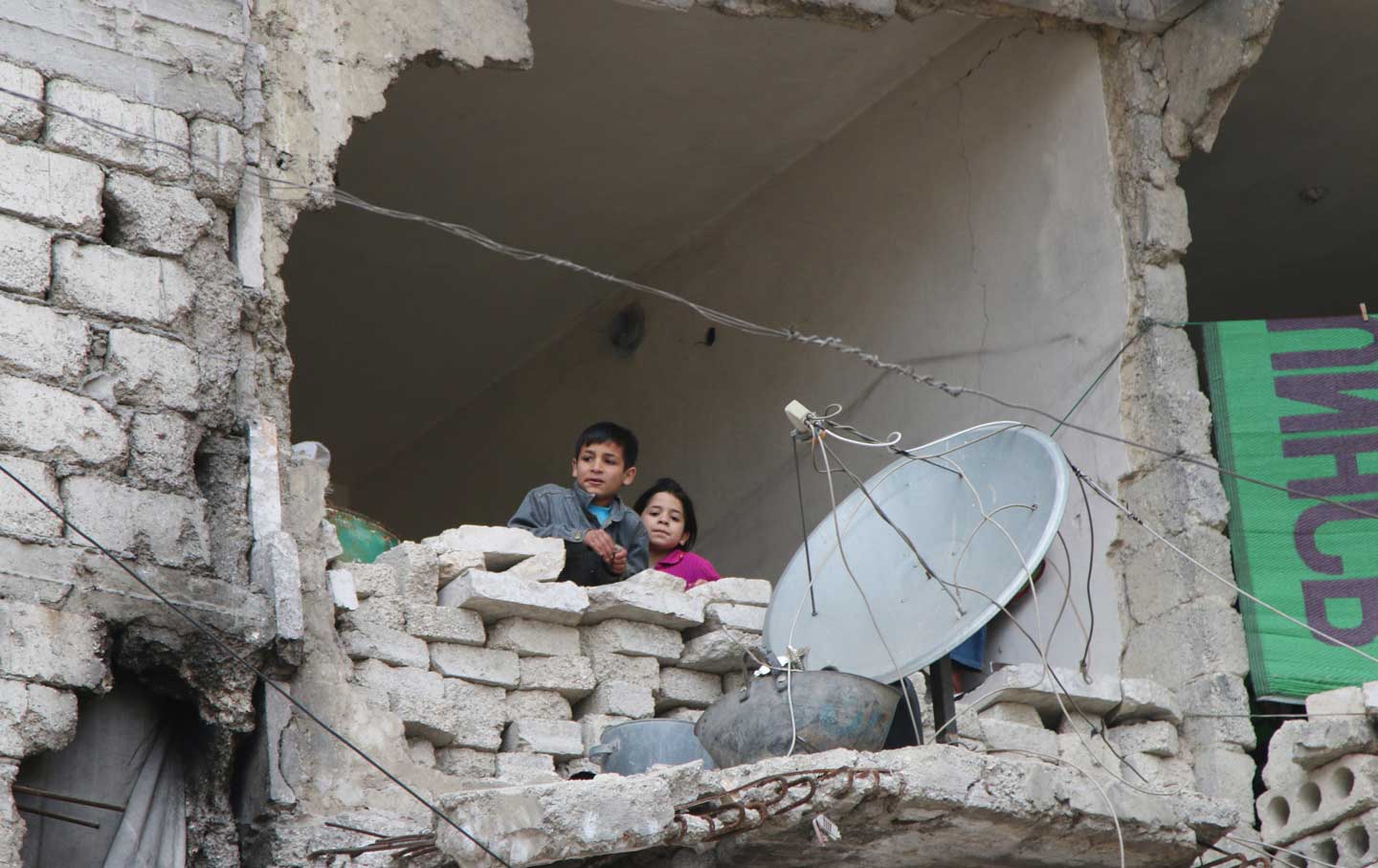 Gaziantep, Turkey—Forty seconds is a lifetime. That’s about the time it takes for a barrel bomb to fall to earth after it has been dropped from a Syrian regime helicopter, some 7,000 feet above ground. “It’s a very long period time to know if you will live or not,” Mohamad Katoub, a dentist and medical worker with the Syrian American Medical Society, told me in their office space, just miles from the Syrian border.

The crude explosives, which have become the symbol of Syrian President Bashar al-Assad’s targeting of rebel-held areas, are typically oil drums loaded with shrapnel and explosives. But after the regime agreed to relinquish its stockpiles of sarin gas, a chemical weapon it used on suburbs of Damascus in August 2013, killing hundreds in a matter of hours, it began putting chlorine gas in barrel bombs instead. Though less lethal than sarin, in concentrated doses chlorine can cause burning of the eyes and throat, difficulty breathing, pulmonary edema, and even death. Despite being illegal under international law when used as a weapon, a recent report by the Syrian American Medical Society (SAMS), a medical aid group, found that “barrel bombs filled with chlorine gas were used systematically in civilian areas of opposition-held territories beginning in 2014.”

All told, SAMS found that there have been 161 confirmed reports of chemical attacks in Syria from the beginning of the conflict to the end of 2015, with another 133 attacks reported but unconfirmed. Nearly 15,000 Syrians have been victims of chemical attacks, and some 1,500 have died. As the civil war in Syria enters its fifth year, a temporary cease-fire between the Syrian government and its opposition appears to have ended the chemical attacks, for now, as the United States and Russia continue to broker peace negotiations. (Israeli Defense Minister Moshe Yaalon accused Syria of using chlorine days after the cease-fire went into effect, though his account has not been confirmed.) Although ISIS and Al Qaeda’s Syrian affiliate the Nusra Front are both exempt from the cease-fire, and the fragility of the agreement has left many in the country worried about what will come next, the slow in fighting has provided medical workers and response teams an opportunity to reflect on what the systematic use of chemical weapons has done to the Syrian people.

In an interview, Mohamad Katoub described his work since the earliest days of the uprising. Though he’s been based in Gaziantep since May of 2014, he was in a hospital in a suburb of Damascus when the regime unleashed the August 2013 sarin gas attack that horrified the world and nearly spurred the US to launch a bombing campaign in response. Beyond the obvious horrors of experiencing or witnessing a chemical attack, including post-traumatic stress disorder and depression, Katoub said that the attacks have other effects, like generating false alarms that perpetuate panic and stretch the limited resources of response teams. Many areas don’t have adequate waste management, Katoub explained, so people burn their trash. “Sometimes maybe the rubbish has a tire in it, or something—a different smell from usual,” he said. When that happens, people “will be afraid—many times we receive false calls” reporting chemical attacks.

The chemical attacks became so normalized within the country that Katoub said some became numb to them. “I will never forget when I woke up one time, and I heard two of my neighbors talking about the crisis of food [shortages] in the area,” Katoub said of his time outside of Damascus. Then he reenacted their dialogue. “’Did you hear about the eggs today?’ ‘Yes, the eggs are about $2 today, did you hear Harasta [a suburb of Damascus] was attacked by chemical attack?’ ‘Oh, poor Harasta, I’m so sorry for them. OK, I’ll go to the market and get some food.’”

Still many more lived in constant fear. Over the course of 2014 and 2015, chemical attacks had become an everyday part of life, one of the forces driving migration from the country. Even if your town wasn’t directly targeted, if the wind blew the wrong way, your neighborhood could be affected. “People began to lose their minds,” Katoub said, thinking anything and everything was a new round of chlorine or some other gas attack. The SAMS report echoed this sentiment: “While most Syrians have adapted their lives to fit the reality of daily shelling and bombing, moving medical facilities and schools underground, the threat of chemical attacks takes away a feeling of any safe haven.”

In eight provinces across Syria, an organization called Syria Civil Defense (SCD)—known colloquially as the White Helmets—rushes to the scene of an attack to look for survivors. Munier Mustafa, who was a firefighter before the war, is the deputy director of the SCD and the head of the Aleppo chapter of the organization. Through a translator, he described to me what the white helmets do in the immediate aftermath of a chlorine attack.

“It’s like somebody is cutting off their breath,” said Mustafa. First, the SCD tries to mitigate the exposure to the chemicals in the immediate aftermath of a bombing. “We wash the area of the attack with a great amount of water, and we put [oxygen] masks on civilians” who show symptoms of chlorine exposure. “We take off the clothes of those who were affected in the chlorine attack,” he explained, since clothes can retain the chemical. Then they provide first aid until the person can be transported to a hospital.

Mustafa says the cease-fire has greatly decreased the number of Russian airstrikes, which had repeatedly shelled civilian areas. “Compared to before, it’s maybe 1 percent,” he said. Still, the day before we spoke the regime dropped a barrel bomb on the town of Kafr Hamra, just outside Aleppo. Mustafa says there were small injuries but no one was killed, and that the bomb didn’t contain chlorine.

Mustafa was only in Gaziantep for a few days during the cease-fire to meet with other members of the SCD. Since there have been fewer attacks for the SCD to respond to, they’ve been working on training new volunteers, especially women. They hope to open five centers soon to train female medics. In all, more than 2,900 Syrians have volunteered to join the White Helmets since the organization was founded in 2013. More than 107 have been killed in the line of duty, including 32 in Aleppo. The regime has regularly employed a policy of dropping a second bomb in an area after first responders have arrived, a practice known as a double tap.

The Assad regime has also targeted the centers the White Helmets use to store their equipment, and attacked their vehicles when they are in the field. In two cases that Mustafa was personally aware of, their centers were bombed while the White Helmets were out responding to an attack. “Honestly, and I experienced this, the worst moments of the life of any human being are the moments right after the barrel bomb has been dropped, until it has exploded,” he said of the fear attacks instill in civilians.

There have been reports of the regime continuing to target the White Helmets during the truce. Even in cases in which it isn’t clear that they’ve been singled out, their jobs remain incredibly dangerous. Two White Helmets have been killed in the past seven days, including in a strike on Thursday that reportedly killed 32 civilians.

Though everyone I spoke with hoped the cease-fire would hold, the regime’s continued bombing of rebel areas has called its durability into question. Further, there hasn’t been any relief for the many Syrians who live in territories controlled by ISIS or the Nusra Front. “It’s a kind of fake cease-fire,” said Jalal Nofal, a psychologist from Damascus who now lives in Gaziantep. He adds that although the reduction in attacks is clearly an improvement, there’s a prevalent worry that Assad will never be held accountable for his crimes. “There’s a feeling there will be no justice at all.”

Still, one thing the partial cessation of hostilities has shown is that the civilian resistance to the regime is still alive. The day before I interviewed Mustafa, demonstrators in Aleppo called for the fall of the regime. “The protesters are back with the same demands, the same chants,” says Mustafa.

The brief period of calm has given Mustafa and his colleagues a glimpse of what life might be like when the war eventually ends. “We want to continue the cessation,” he said. “And we want to shift to rebuilding our state.”