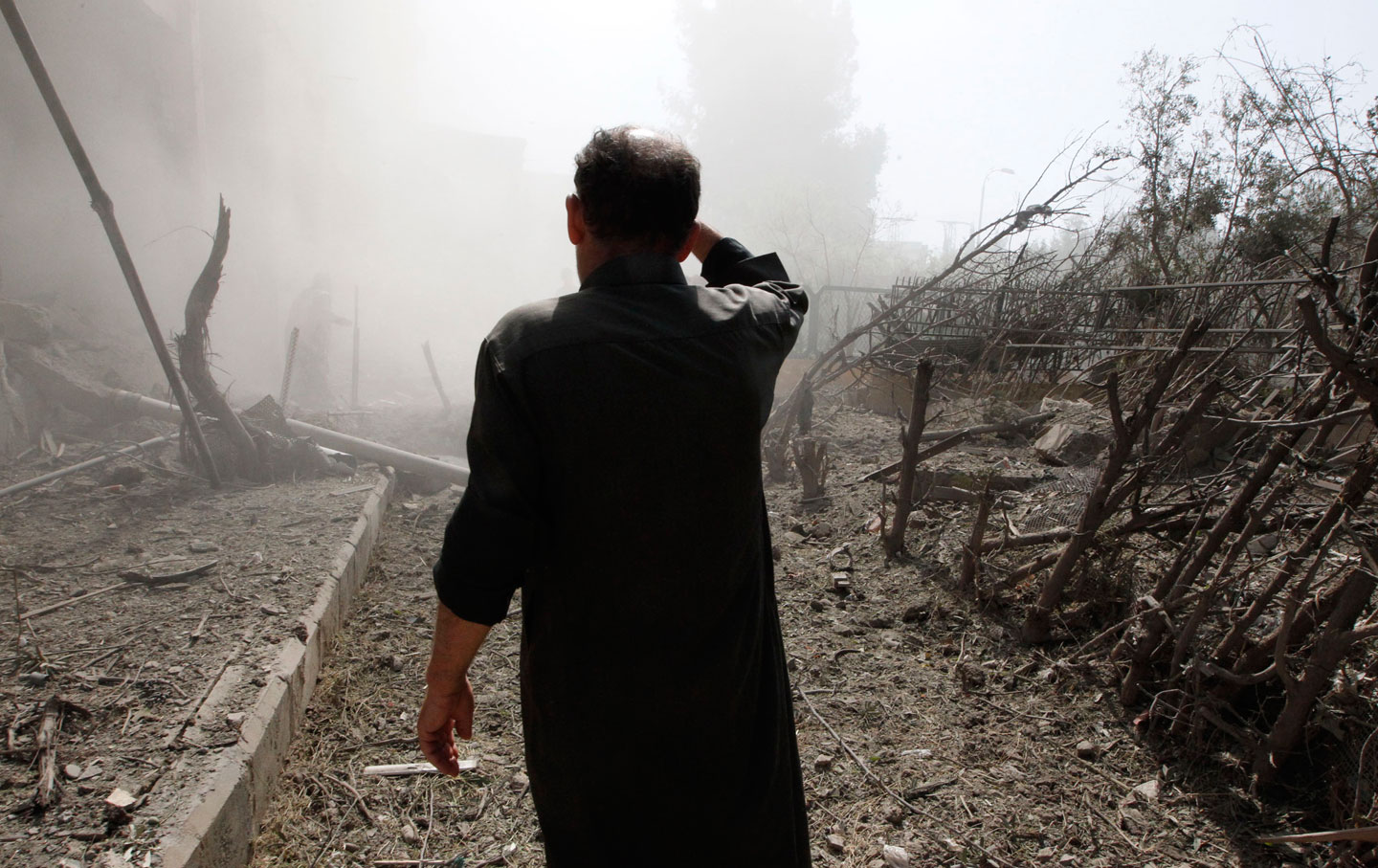 The refugee crisis now confronting Europe, with hundreds of thousands of desperate migrants pouring across multiple borders, has opened up deep fissures in the European Union. The crisis threatens to tear the EU apart, but it’s truly global in nature, with roots in decades of conflict, from Afghanistan to Somalia to Eritrea; in the multiple upheavals stemming from the Arab revolutions, from Libya to Yemen; and in the regional instability and extremism brought about by the US invasion, occupation, and destruction of Iraq. But the greatest source of refugees flooding into Europe now is Syria, and that demands a rethinking not only of EU and US refugee policy, but also their approach to Syria’s civil war.

About half of Syria’s population—nearly 12 million people—has been displaced after four years of brutal conflict, with some 300,000 dead and more than 4 million now having fled the country. According to the Office of the UN High Commissioner for Refugees, the pronounced increase in Syrians fleeing to Europe this year has multiple causes, chief among them despair at the crisis in their home country ever being resolved, combined with a steadily declining flow of aid to refugee camps in Turkey, Lebanon, and Jordan. The UN’s current interagency aid plan is less than 40 percent funded for 2015, even as some countries bordering Syria have imposed tight restrictions on refugee employment.

The humanitarian catastrophe has spurred renewed demands for world powers to address the civil war, and the UN General Assembly session this September was an opportune moment to do so. Indeed, US and Russian diplomats have expressed increasing willingness to cooperate in resolving the crisis, and Washington and Moscow share a common goal in stemming Islamist extremism and achieving stability in Syria and Iraq. But the dueling UN speeches by President Obama and Russian President Vladimir Putin exposed once again the deep divisions between the two countries.

Those divisions reflect and are compounded by the sectarian divide in the Middle East, in which Saudi Arabia and the other Gulf monarchies, along with Turkey, have lavished arms and aid on rebel forces fighting the government of Bashar al-Assad, while Russia, Iran, and Lebanon’s Shiite militia Hezbollah have steadily increased their supply of arms, aid, and advisers—and in the case of Hezbollah, ground troops—to Assad’s regime. Putin has now raised the ante by announcing an intelligence-sharing agreement among Russia, Iran, Iraq, and Syria with the avowed aim of fighting the Islamic State (ISIS), but one that seems intended just as much to shore up the Syrian leader. In fact, Russia carried out its first airstrikes two days after Putin’s speech.

While the conflict may appear to be as intractable as ever, there are concrete measures that nations can take, both individually and collectively, to relieve the agony, even as they must urgently renew talks toward a negotiated solution. First, the UN and other aid agencies need an immediate vast increase in funding. World powers may disagree on how to resolve the conflict, but nothing is preventing them from addressing the humanitarian crisis, which increasingly threatens the stability of Jordan (now hosting 600,000 refugees), Lebanon (more than 1 million), and Turkey (about 2 million). Second, the United States and European countries must increase, by orders of magnitude, the number of refugees they accept for asylum. The United States could easily absorb at least 100,000—many more than the paltry increase recently announced by the Obama administration.

As for broader American policy toward Syria, it has reached a dead end. The air campaign begun more than a year ago has failed to turn the tide against ISIS, and the US effort to train and field a “moderate” Syrian rebel army to complement the air strikes has collapsed. While the Kurds in the north have proved to be useful allies in the fight against ISIS in Syria as well as Iraq, the same cannot be said of Washington’s regional Sunni allies, who continue to pursue their own particular interests, with Turkey more focused on targeting the Kurds than ISIS, and Saudi Arabia and the Gulf states still funding jihadi rebel groups in Syria, even as they pretend to join the war against ISIS.

To avoid an even greater catastrophe, the administration must decisively reverse course and take the only road that has a plausible chance of stabilizing Syria and eventually defeating ISIS and other Islamist radical groups. That road entails, first, the recognition not only that there is no military solution, but that military action actually impedes progress on the diplomatic front. Second, the United States must work toward a solution with all of the parties to the conflict: the Syrian government, Hezbollah, and the various rebel forces and civilian opposition groups; regional powers including Iran, Turkey, and the Gulf states; as well as countries like Russia and the other permanent members of the UN Security Council. The only exception to this all-inclusive rule should be ISIS, which—quite apart from its theatrical, murderous nihilism—rejects as a matter of principle the very idea of negotiations.

The Geneva Communiqué of 2012—the result of a conference initiated by then–UN and Arab League envoy Kofi Annan and attended by the United States, Russia, China, and Britain—was stillborn, primarily because of disagreements over the status of Assad and the definition of what a “transition” to a more representative government would entail. The follow-up Geneva conference, in 2014, collapsed mainly over a dispute about whether Iran should attend. The parties must now restart those talks, avoiding ultimatums, exclusions, or bottom-line demands about Assad’s status, even as they try to narrow their disagreements over what a workable transition would mean in a country now devastated and deeply traumatized by civil war.

In his UN speech this September, Putin may have sounded bellicose in his insistence on the legitimacy of the Assad regime, but that posture obscures long-standing Russian indications that the fate of Assad is less important than the need to ensure that any transition results in stable governance. Putin is correct in pointing out that the violent removal of dictators without retaining some functioning government structures to replace them—as with Gadhafi in Libya and Hussein in Iraq—has led to regional chaos and extremism. On the other hand, Obama is surely correct in his insistence that the Assad regime’s brutality “is not just a matter of one nation’s internal affairs—it breeds human suffering on an order of magnitude that affects us all.” And it’s certainly reasonable for Obama to call for “a managed transition away from Assad and to a new leader, and an inclusive government.”

The parties to a new peace conference must focus on creative ways to bridge that divide, even as they pursue other steps to de-escalate the conflict. Those interim steps should include support for local cease-fires, like the one recently agreed to in Zabadani and Idlib province. A second step should be deeper cooperation among all nations in stemming recruitment by jihadi extremists, in particular ISIS. A third step is an arms embargo, preferably one agreed to by the UN Security Council. That may seem a distant possibility now, given Russia’s recent steps to buttress its military base in Latakia and increase the flow of arms to Assad’s government, not to mention the continued supply of weapons to rebel groups, whether moderate or jihadi. But an embargo agreed to by Washington, Moscow, and the other P5 nations, as well as the Gulf monarchies, Iran, and Turkey—and applied to all parties, rebels as well as government forces—is an eventual necessity.

It is time for the White House to commit itself to a more serious working relationship with Moscow. Washington must not only reorient its activities from military action to diplomacy; it must also strive to work out an agreement with Russia in which both parties press their allies in the region to de-escalate the conflict. Washington should put its regional allies on notice that the United States will no longer turn a blind eye to the continued support by Turkey and the Gulf states to extremist groups that threaten both Syria and Iraq. The White House should also stand up to the belligerent demands for military action by the Republicans as well as some Democratic hawks, and instead respond affirmatively to the letter from Connecticut Representative Jim Himes, along with more than 50 other members of Congress, calling on President Obama to lead diplomatic efforts in reaching a negotiated end to the civil war while forging a coordinated campaign against ISIS.

Some will object that this course of action risks propping up the Assad regime and alienating our Sunni allies as well as Sunnis on the ground. But every effort should be taken to give Turkey, Saudi Arabia, and other Gulf states the opportunity to participate. And every effort should be made to lay the groundwork for an eventual settlement that would bring about a broader, more inclusive Syrian government. Given the depth of Syria’s destruction, a final settlement may require a robust UN peacekeeping force, similar to what was used in Cambodia and Bosnia.

As we should have learned over the past four years, making inflexible demands has only produced more extremism, more war, and more tragedy for the region. It is time to try the other road.