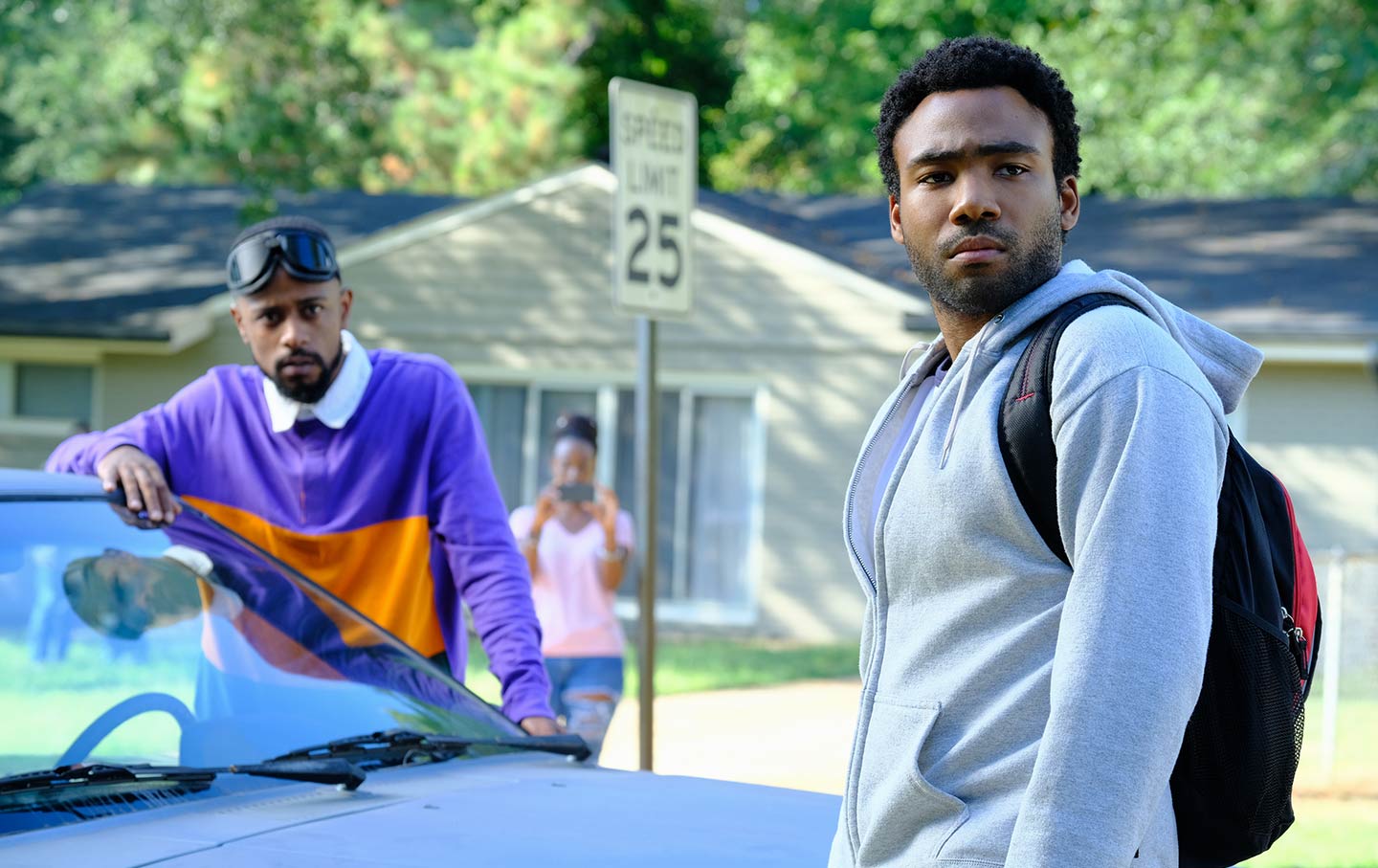 Early on in the first episode of Atlanta’s new season, we’re treated to a kind of fable. Earn (Donald Glover) has just told his friend Darius (Lakeith Stanfield) that his parents are going on a trip to Florida. “Make sure you tell ’em to watch out for Florida Man,” Darius replies.

Darius is incredulous that Earn’s never heard of him. “Florida Man is responsible for a large percentage of abnormal incidents that occur in Florida,” he tells Earn (and us). “Think of him as an alt-right Johnny Appleseed. No one knows his true identity, date of birth, what he looks like. That’s why headlines always say ‘Florida Man’: ‘Florida Man Shoots Unarmed Black Teenager.’ ‘Florida Man Bursts Into Ex’s Delivery Room and Fights New Boyfriend as She’s Giving Birth.’ ‘Florida Man Steals a Car and Goes to Checkers.’ ‘Florida Man Beats a Flamingo to Death.’ ‘Florida Man Found Eating Another Man’s Face.’”

As Darius recounts each of Florida Man’s exploits, we get nightmarishly vivid cutaways to a man in a yellow trucker cap, his face not fully visible, performing them. Darius ends the speech on a note of stoner paranoia: “Him, the state government, in fucking cahoots.”

“Why would anyone even do that?” Earn asks.

“To prevent black people from coming to and/or registering to vote in Florida, Earn,” Darius answers, as if his friend has missed the most obvious of connections. “Come on!”

This scene isn’t typical of Atlanta—indeed, part of the joke here is the usually laconic Darius delivering such a long monologue to begin with—but it reflects something of the show’s ambition and its variety of registers. The scene is funny, surreal, frightening, and closely observed, all at the same time.

“Florida Man” is a meme borrowed from Twitter; it may be that Darius has seen the joke account of that name and taken it for reality. Then again, it is a kind of reality: The headlines that the account gathers are all real, even if they obviously don’t refer to the same man. In that sense, “Florida Man” really is someone to watch out for, and while Darius’s conspiracy theory about him is ridiculous, it’s not as ridiculous as it ought to be—or as it would have seemed in September 2016, when Atlanta premiered.

Atlanta was created by Donald Glover, who also stars as Earn, a Princeton dropout who is struggling to make a living managing his cousin Alfred’s rap career. (Alfred goes by the name Paper Boi.) The show is ostensibly a sitcom—the episodes last half an hour, and there are always jokes—but individual scenes have an unsettling unpredictability that floats free of genre: At any given moment, Atlanta can feel like a crime show, a family drama, a Southern Gothic horror story, or sketch comedy.

Glover has described Atlanta as “Twin Peaks for rappers,” and while that somewhat overstates its strangeness, it isn’t totally off. Season one featured a black Justin Bieber and an invisible car, among other surrealist grace notes. In one of my favorite moments, a promoter Earn has been trying to track down disappears into a secret revolving door in the wall of a nightclub. It’s a great trick, and an apt visual metaphor for the show’s willingness to fake us out and keep us off-balance.

Atlanta’s second batch of 10 episodes has been given the subtitle Robbin’ Season, which, as Darius explains, refers to the period just before Christmas when crime in the city begins to rise. The show’s writers have said that Robbin’ Season was structured as a longer narrative, though the first three episodes (the only ones I’ve seen so far) all feel relatively self-contained.

The new episodes are unified, though, by a greater sense of danger than was present in the show’s first season. Each of the first three features guns prominently, though they don’t always go off; the premiere begins with a heist at a fast-food restaurant, which is shot with real tension. Characters who at first seem purely comic—like the clean-living rapper Clark County (RJ Walker), who hawks chocolate drink in TV commercials (“We drinkin’ Yoo-hoo like it’s dirty Sprite”)—turn out to have a violent dark side. The comedian Katt Williams has a surprisingly moving turn in the first episode as Earn’s Uncle Willie, a frustrated, defeated man with a chip on his shoulder and an alligator in his bathroom.

The white world, and the menace it represents, feels more present, too. Florida Man’s insane violence—and, implicitly, Donald Trump’s insane governance—haunts the relatively safe and self-sufficient black community of Atlanta. Racism might take the form of a microaggression, a suspicious look, or a physical assault. Earn and Paper Boi visit a Spotify-like music-streaming company where they’re viewed with condescension by the all-white staff. Earn’s attempts to spend a $100 bill result in a series of public humiliations. A tearful white woman recites Paper Boi’s “disgusting” lyrics (“I still might have to slap a trick / Shout-out Colin Kaepernick”) into her vlog, hinting at some sort of conservative backlash to come.

It’s too soon to tell exactly where Atlanta: Robbin’ Season is headed, and the truth is that it doesn’t really need to go anywhere; it already is somewhere. The show has a sense of place and tone you hardly ever see on television, for which credit should go not only to Glover but to Hiro Murai, who directs almost every episode. Not to mention the city of Atlanta itself—increasingly a center of film and television production, as well as a longtime hub of the black middle class—a setting that helps to unify the show’s whimsical twists and turns into something coherent. The place has, as Darius would put it, a vibe.

And then there are the actors. The entire ensemble cast is extraordinary—Brian Tyree Henry’s quiet, measured performance as Paper Boi is a particular wonder—but Glover’s charisma is key to making the show work. On paper, Earn is a somewhat dour, passive character: He spends a lot of scenes scowling and looking frustrated, as if there’s something he wants to say that he knows he can’t. But Glover renders him totally sympathetic even in his stifled moments, and when he does turn on the charm—as in his scenes with Zazie Beetz, who plays Vanessa, Earn’s former girlfriend and the mother of his daughter—you begin to see how this guy could be a plausible heir to Billy Dee Williams, whom he’ll succeed as Lando Calrissian in a forthcoming Star Wars film.

Glover’s burgeoning movie career means we’ve had to wait a long time for the second season of Atlanta, and there’s no telling how long it will be before the next one. So we’d better all savor it while it’s here; shows this inventive and surprising are rare indeed.