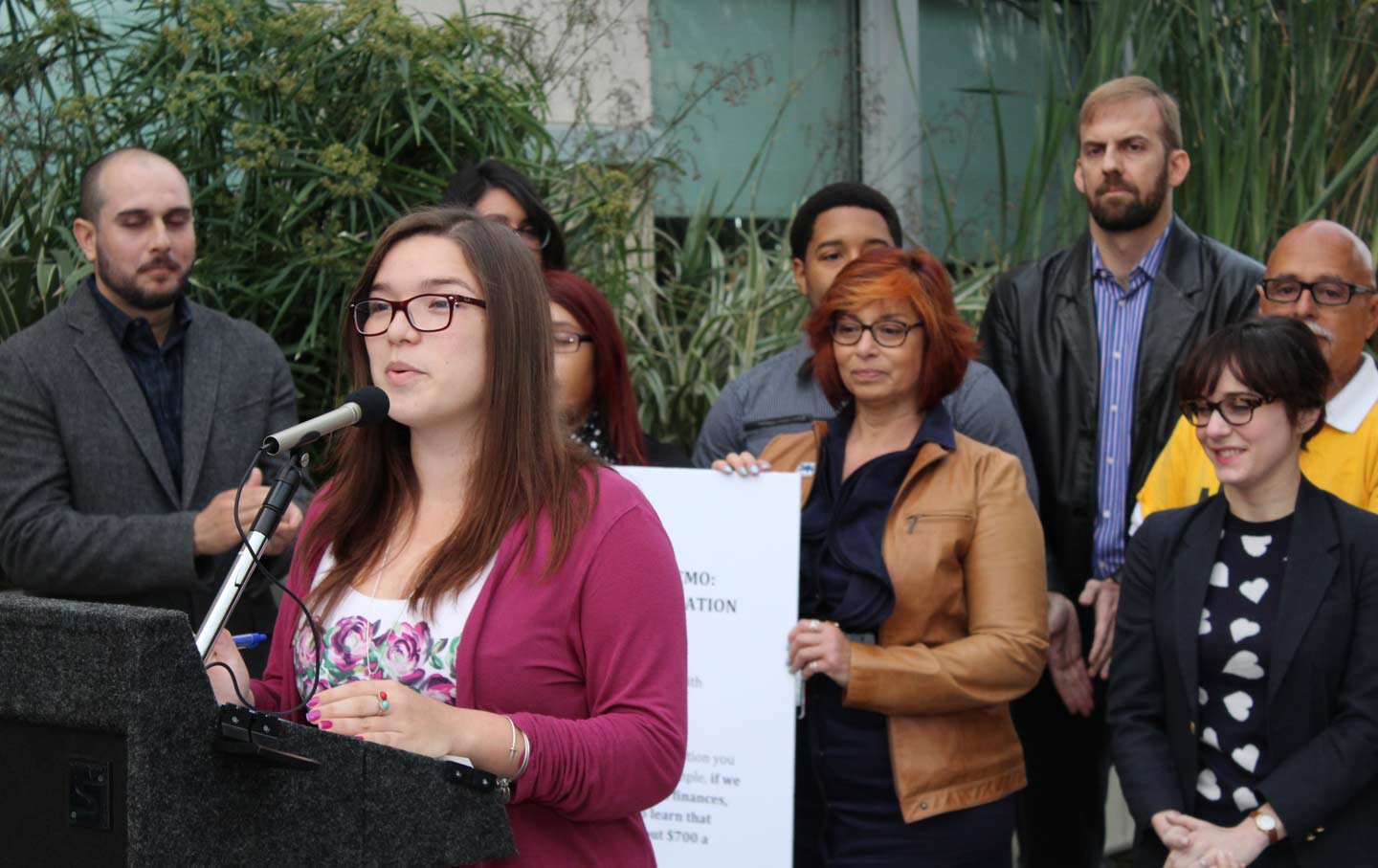 Last spring, 70 teachers announced their plans to form a union at Los Angeles’ largest charter school chain, Alliance College-Ready Public Schools. The news could not have come at a worse time for the city’s business community, led by the Broad Foundation, whose unprecedented plan to make the district 50 percent charter was leaked a few months later. Alliance College-Ready, led by the Broad Foundation’s former managing director, was to be at the center of these plans.

However, a union breakthrough into the city’s largest charter operator, just as this 260-charter school expansion was supposed to begin, would fundamentally undermine the Los Angeles boosters’ union-free vision for the nation’s largest-ever charter school district.

Almost immediately after the announcement, Alliance’s private management organization began crafting plans to counter the campaign. Only a month after the drive launched last spring, an internal memo was leaked, advising administrators on how to discourage staff from unionization, noting candidly, “the goal is no unionization.”

According to one version of the anti-union script, as of May 2015, former Alliance students were paid to call parents and read the following: “Having a teachers’ union would be a big change for the Alliance. It would end the independence that the Alliance has to make decisions on behalf of kids. And—I don’t know about your kids—but I chose to go to the Alliance because of the small class sizes, great teachers, and personalized attention. [Add any other reasons you chose to attend the Alliance.]” (emphasis original)

And though many teachers have cited large class size and overtesting as their reasons for supporting the union drive, the script continues, “If UTLA unionized at the Alliance, UTLA would get involved in decisions about those things—like how to evaluate teachers and how much learning time kids get. Even class sizes—and a lot more—would need to be approved by UTLA.” After finishing the script and asking parents to sign an anti-union petition, the paid alumni were then supposed to categorize the parents, in a database, by their perceived level of support.

Other documents concerning the union drive discuss the phone-banking efforts and also refer to Alliance’s parent liaisons, who appear to be part of Alliance’s plan to develop “parent captains and parent supporters at schools” against the union. As of now, little is known about what these paid “parent liaisons” have actually done to organize parents against the union. But last year, in response to a union-backed rally claiming parents were being pressured to fight the union, Linda Hernandez, an Alliance “parent liaison,” spoke at a counterrally, at which parents claimed they had never felt any pressure from the school to fight unionization. At the time, Hernandez failed to disclose to The Los Angeles Times that she was a paid employee of Alliance’s Susan & Eric Smidt Technology High School, where she is listed as both a “parent liaison” and an instructional assistant.

The documents also included a meeting agenda, drafted by Mark Gomez, a strategic consultant for Alliance, asking his associates to ponder the question: “What are other activities (beyond signatures) we can have parents do to get more involved? Let’s develop a list of activities. Possibly test out over the summer.”

Alliance has not responded to The Nation‘s inquiry into what those activities entailed. In the past, charter schools, like Success Academy in New York, have raised eyebrows for busing out parents and students to protest for their own schools, but these sorts of expenditures for explicitly anti-union parent organizing are unheard of. Alliance, a publicly funded charter school network, has also not responded to The Nation’s inquiry as to the costs of this anti-union campaign.

Nonetheless, Alliance’s parent strategies appear to be working. Alliance claims that over 1,600 parents have signed the anti-union petition.

“There’s not much support, because parents don’t know their rights,” says Elva, who only gave her first name, and who is one of only a few parents to publicly support the union. She spoke with the The Nation at a rally sponsored by Clergy and Laity United for Economic Justice. “They’re afraid to talk, because Alliance doesn’t allow them to talk. When we go to meetings, they give us a very limited time to talk to the teachers. So the teachers are quieted, limited to only giving grades.”

The union drive comes at a critical juncture for Los Angeles’ powerful education reform community. Spearheaded by the Broad Foundation, an organization led by Los Angeles’ preeminent patron, Eli Broad, the rapid charter expansion was supposed to be a “proof point” for districts nationwide, shuttering traditional public schools and adding 5,000 new teachers who would not belong to United Teachers of Los Angeles, the teachers’ union. And Alliance, explicitly mentioned in the leaked plan, is almost certain to benefit from this proposed expansion, as its current CEO, Dan Katzir, served with the Broad Foundation for 11 years.

Given these stakes, Alliance has worked with some of the city’s top political operatives to direct the anti-union campaign. For example, the documents show that Alliance and the California Charter Schools Association are collaborating with one of Los Angeles’ most notoriously cutthroat political consultants, Michael Trujillo. Trujillo has experience working with anti-union groups like Parent Revolution and gained notoriety, in 2011, after an email was leaked from his campaign in which he wrote of an opponent, “We are about to put a political bullet in between Rudy Martinez’s forehead and make him pee in his pants too.”

In the summer before this school year, Trujillo was scheduled to visit all of Alliance’s 27 middle and high schools and meet with principals, according to emails from Mark Gomez, a consultant for Alliance. Alliance has not responded to The Nation’s inquiries as to the content of those meetings, but, in the following months, union organizers claim they have had trouble connecting with teachers, who tell them they “can’t be seen talking” because of administrative surveillance and fear of politically motivated departmental reductions—allegations that prompted a Los Angeles Superior Court to issue an injunction against Alliance in December.

“It’s almost like reading about something from another era,” says Elana Goldbaum, a pro-union teacher, commenting on her experience organizing. “People have to whisper about the union; it’s an environment of fear.

Alliance’s management may be deploying these intense opposition tactics because, in some ways, the union drive poses a serious threat to Alliance’s school model, which relies on the short stints of young teachers, less compensated than their unionized peers in traditional public schools. Like many charter schools, Alliance experiences high teacher turnover rates (UTLA estimates put it at a whopping 25 percent per year), and some teachers say this is largely because the healthcare benefits offered by the school are fine for young, single people, but not for those interested in starting families.

“I feel so dedicated to my school,” says Goldbaum, “I live for those moments when alumni come back and are so excited for their siblings to be in my class. But they also come in saying, ‘You’re still here?”’ My head and my heart are at odds. At some point, I will have to consider my own well-being. It’s very easy for them to take advantage of us, because this is a profession of passion.”

Michael Bush, a former teacher and now administrator at Alliance, argues on the other hand that the school’s burnout problem can be explained by some teachers’ personal dispositions: “It requires a certain type of spirit to stay, and that’s what it boils down to. The responsibility can be cumbersome; it can sometimes seem uncomfortable. I left teaching, no disrespect to those who leave the game.”

The pro-union teachers also want to challenge what they claim is a top-down approach to everything from testing to teacher evaluation, which they say is helped by their year-to-year employment status. Daniel White, another teacher at Alliance, says, “When I got the chance to be a full-time environmental teacher here, I jumped at the chance. But students here are being tested too much, and we have issues, like, if the evaluator doesn’t know our content, how are they supposed to evaluate us? I want to have input in decisions like this, if I’m going to stick around long term.”

“The old antagonistic approach of unions with let’s call them ‘bosses’—it’s outdated,” insists Bush, regarding teachers’ concerns. “I have never felt a need to unionize here. I know where my boss’s door is, and it’s always open. There’s that family-oriented vibe here, the flexibility for everyone, man.”

As of now, it is unclear where the union drive is headed. Since starting from 70 teachers publicly on board last March, the union claimed its support was up to 140 teachers as of last summer. Alliance, on the other hand, claims that despite a yearlong campaign, “the majority of Alliance teachers have shown no interest in allowing UTLA leadership to speak on their behalf,” according to a statement from spokesperson Catherine Suitor. It remains to be seen whether the pro-union teachers can convince their colleagues that a union is the best way to be heard.

Bush argues that teachers’ issues can be solved through dialogue with the administration, rather than through the adversarial approach, which, he says, a union would inevitably bring. “There’s nothing that cannot be transcended via communication,” Bush says. “Adversarial approaches are never going to solve anything. There are ways to satisfy everybody’s needs, for the most part amicably. Some of us just have a harder time coming to that conclusion.”

“We have great leadership at my school, Geertz, but this is not about trusting our CEO,” says Goldbaum. “How long can we rely on the good word of people in power? As a history teacher, having checks and balance is important. The union is the only way to have that check.”