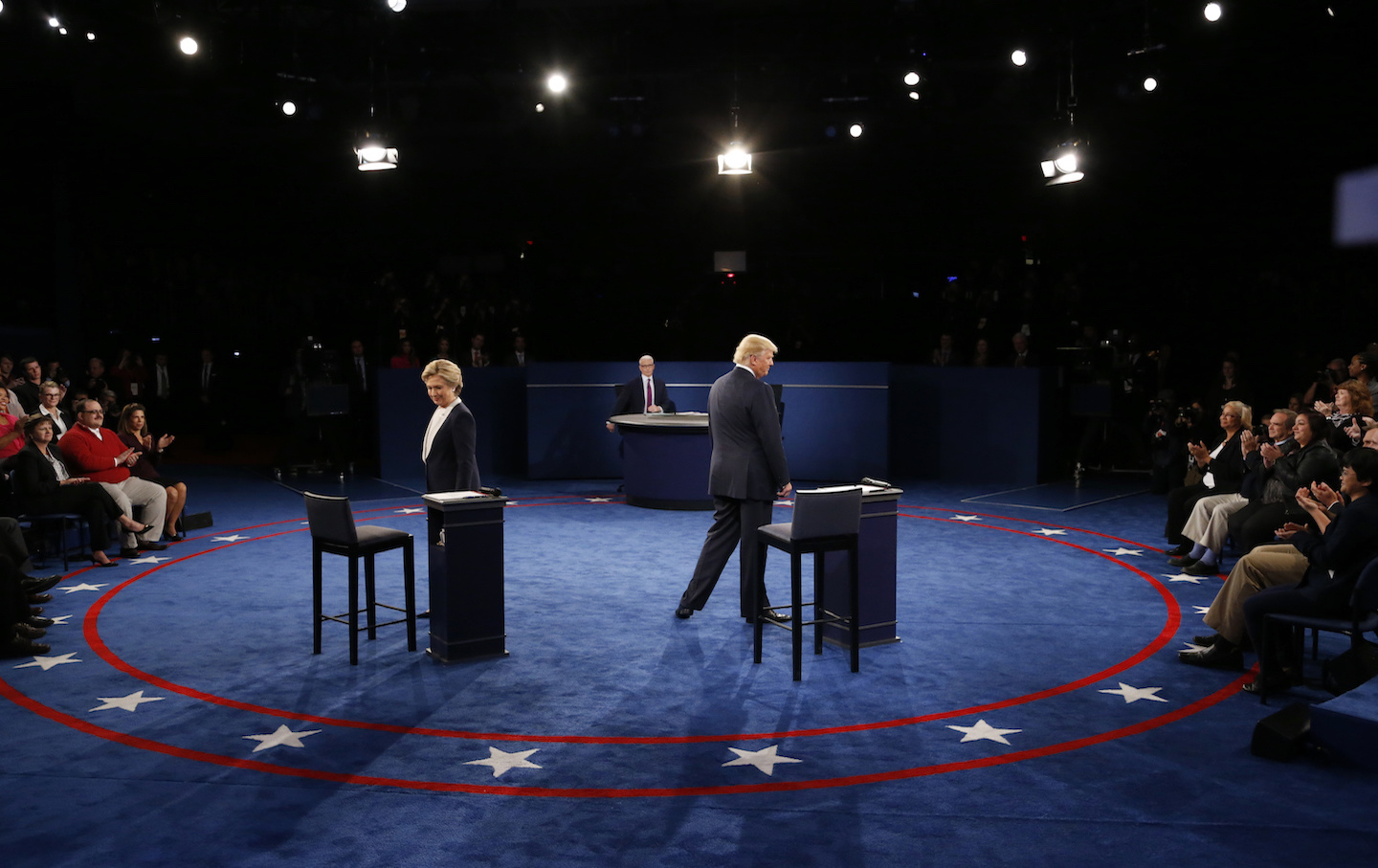 St. Louis— In this weirdest of all possible elections, we’ve now had our first quantum debate, for which the only fitting summary is: Anything that can happen will happen. One of the strangest things happened before the debate even started. Two hours before the broadcast began, Trump staged a surprise “debate preparation” event featuring three women who have long accused Bill Clinton of sexual assault, and one woman who was raped and whose rapist, represented by a very young Hillary Clinton over 40 years ago, was freed on a technicality. For those of us wondering whether, in response to the firestorm of criticism provoked by his language on the now infamous Access Hollywood recording, Trump would “go there” in the second debate, the answer, delivered live on Trump’s Facebook page, was clear: Yes, he would.

“Mr. Trump may have said some bad words, but Bill Clinton raped me and Hillary Clinton threatened me,” said Juanita Broaddrick, who like the other women spoke only very briefly at the event, but attended tonight’s debate as Trump’s guests.

So it was not much of a surprise when neither candidate offered the customary handshake at the start of proceedings. Nor did it take long for the topics of Trump’s tape—and Bill Clinton’s own history as an alleged sexual predator—to surface in the debate itself. Though the first question from a member of the audience—“Do you feel you are modeling appropriate and positive behavior for today’s youth?”—gave both candidates enough room to avoid the obviously intended topic, which they did, Anderson Cooper soon made matters explicit: “You brag that you have sexually assaulted women. Do you understand that?”

In response, Trump admitted “locker-room talk,” but denied ever actually assaulting women—and neither Clinton nor the moderators mentioned the pending lawsuit accusing him of rape. Trump then went on to claim that Bill Clinton repeatedly abused women, who were then smeared by his wife. To which Hillary Clinton replied by saying that Trump was “unfit to be president.”

Yet that was far from the most bitter exchange of the night. On the very next question, when Clinton suggested that Trump needed to apologize not just for his crude language on the hot mic tape but also for “the racist lie that President Obama was not born in the United States,” Trump began on familiar ground with his claim that the “birther” phenomenon originated with the Clinton campaign—only to swerve into a stunning threat regarding Clinton’s e-mails: “If I win, I am going to instruct my attorney general to get a special prosecutor to look into your situation.” And when Clinton responded, “It’s just awfully good that someone with the temperament of Donald Trump is not in charge of the law in our country,” Trump interrupted: “Because you’d be in jail.”

Thanks to the town-hall format, though, there were also substantive exchanges: on health care, energy policy, and the Supreme Court. In each case Trump hewed to current Republican orthodoxy, promising to repeal Obamacare, loosen controls on oil companies (and also declaring, “Coal will last for a thousand years”), and repeating his pledge “to appoint judges very much in the mold of Justice Scalia.”

But environmentalists will have been disappointed to hear Clinton repeating the fracking industry’s line that “producing a lot of natural gas…serves as a bridge to more renewable fuels.” And civil libertarians should be distressed that, instead of denouncing Trump’s demand that American Muslims prove their loyalty by acting as informants—“Muslims have to report the problems when they see them”—Clinton effectively echoed the suggestion: “We need American Muslims to be part of our eyes and ears on our front line.”

For me the strangest moment came at the end, when, in response to an audience question challenging each candidate to “name one positive thing” about the other, Clinton praised Trump’s children—and then Trump, sounding for all the world like a Clinton campaign ad, called her “a fighter” who “doesn’t quit.” At which point the two candidates shook hands. Perhaps next time they’ll sing a duet.