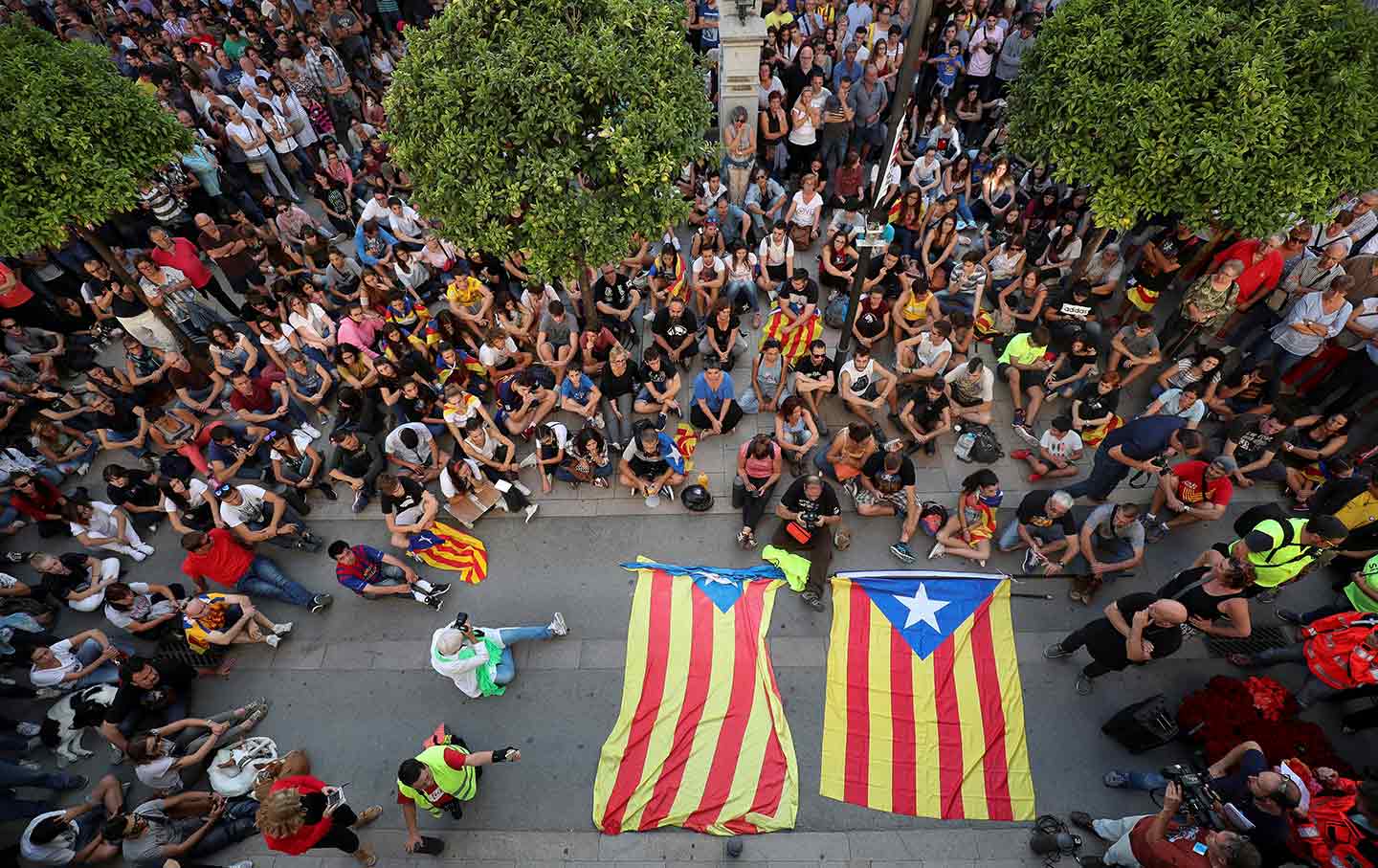 In Spain, the day before a vote is generally reserved for reflection: no campaign ads, speeches, or rallies. But on Saturday, September 30, the night before the Catalan independence referendum, thousands of people in Barcelona not only reflected but made a political decision: They descended on elementary schools, civic centers, and other polling stations to ensure that they’d be open on the morning of the referendum. Four days earlier, Catalonia’s High Court—whose members are appointed in Madrid—had ordered police to prevent the stations from opening and to confiscate voting materials. Spain’s Constitution doesn’t allow for secession, and so the Constitutional Court had suspended the referendum on September 7.1

On the morning of Sunday, October 1, the Interior Ministry deployed over 10,000 police officers brought in from the rest of Spain. Social media soon delivered an unending stream of videos and images showing police attacking voters and violently removing ballot boxes. At the Ramon Llull school in Barcelona, for example, riot police used rubber bullets and a human blockade to prevent people from entering the building. Inside, masked officers ripped ballot boxes away from citizens, who chanted: “Votarem! Votarem!” (“We will vote! We will vote!”) By day’s end, the Catalan Department of Health reported that nearly 900 people had been injured, with four hospitalizations.2

The intense violence from police, who shut down only 313 of the 2,200 polling stations, didn’t dissuade the public. According to the Catalan government, more than 2.2 million of 5.3 million registered voters cast ballots, with 90.9 percent voting Sí and 8 percent No for an independent Catalan republic. The Catalan Parliament had adopted a law on September 6 calling for a declaration of independence within 48 hours of the official results if the Sí vote won. Yet Catalan President Carles Puigdemont has been sending mixed signals. On Monday he said that he would seek negotiations with Madrid: “The Catalan government has not decided to declare independence but has rather understood that it’s the moment to appeal to [international] mediation and, if it happens, to discuss everything,” he said. His statement came right after the European Union refused to get involved, maintaining that “this is an internal matter for Spain.” But on Tuesday, Puigdemont said in an interview on BBC that independence would be declared within days.3

Even as police were beating voters, the country’s deputy prime minister, Soraya Sáenz de Santamaría, declared victory. “There has not been a referendum or the appearance of one,” she said on Sunday. “It never made sense to go down this path of irrationality.” That evening, Prime Minister Mariano Rajoy offered his “special thanks…to the security forces, the National Police, and the Civil Guard,” with no mention of the violence. When King Philip VI addressed the country on October 3, calling Barcelona’s actions “an inadmissible disloyalty” and making “an appeal for understanding and harmony,” he too ignored the elephant in the room.4

Many Spanish politicians condemned Madrid’s heavy-handed crackdown. “Today is a sad day for our democracy,” Socialist Party leader Pedro Sánchez tweeted. Rajoy’s “repressive strategy has failed,” wrote Podemos leader Pablo Iglesias, and only served to push the deterioration of Spanish “democracy and coexistence to unprecedented limits.” But the response that echoed most widely came from Barcelona Mayor Ada Colau: She demanded the removal of police and called Rajoy a “coward,” denouncing the lack of dialogue between the Spanish and Catalan governments. “The Rajoy government has insisted on turning to the courts, hiding behind judges and public prosecutors to avoid its responsibility, which is to act politically. Today it has gone a step further and crossed all the red lines,” she said, adding: “Rajoy must resign.”5 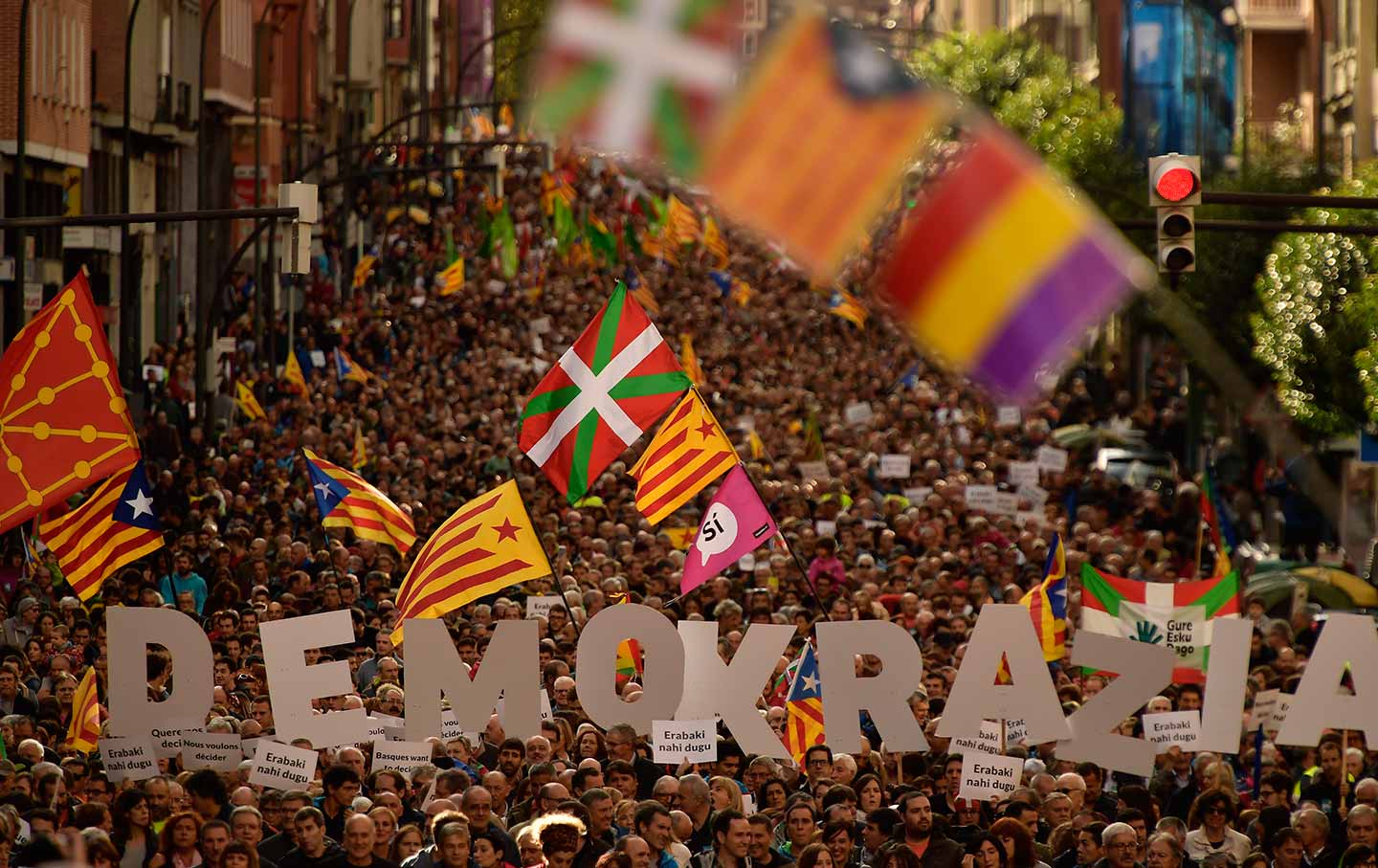 Have Spain and Catalonia Reached a Point of No Return?

Among the political parties pushing for independence is Puigdemont’s conservative Catalan Democratic Party (PDeCAT). According to journalist Guillem Martínez, PDeCAT’s endgame has always been a more beneficial autonomy rather than independence. Puigdemont’s call for dialogue appears to confirm such an interpretation, but his closest allies in this struggle, the Republican Left of Catalonia and the Popular Unity Candidacy, are unlikely to settle for anything less than independence. Meanwhile, on October 2, throngs of young Catalans took to the streets to protest the continued presence of Spanish police. The next day, tens of thousands participated in a general strike, which engulfed every sector of Catalan society, including the soccer team F.C. Barcelona, and blocked more than 50 roads.6

Prime Minister Rajoy’s zero-tolerance approach may have strengthened his support among conservative Spaniards who reject Catalonia’s aspirations, but the repression has hurt Spain’s image abroad and deeply—perhaps definitively—alienated a growing majority of Catalans. According to polls before the referendum, close to 50 percent of the 7.5 million Catalans favored independence, but more than 80 percent claimed the right to self-determination, which Spain’s Constitution denies them. After the violence on October 1, those numbers may be significantly higher.7

The image of black-visored riot police clubbing peaceful citizens will long haunt Catalonia’s collective memory, while the triumph of the vote against all odds will shape the political consciousness of generations of Catalans to come. Spain is now suffering its worst constitutional crisis since the attempted military coup of 1981. Constitutional reform may be the only option to maintain a unified state—which both Podemos and the Socialist Party endorse. But only Podemos supports giving Spain’s regions the right to conduct referendums on self-determination. The 1981 coup lasted mere hours; at present, the “Catalan question” has no end in sight.8