During an open rehearsal of Anne Carson’s play Norma Jeane Baker of Troy in New York City’s newest cultural megaspace, the Shed, I overheard someone say, “This building is called the Bloomberg. Why don’t you just name it the Titanic?” Some things are so colossally extravagant they feel bound to sink.

Despite homing in on some stirring work, like that of opera star Renée Fleming or artist Trisha Donnelly, critics can’t help but stress the Shed’s location in Hudson Yards, New York City’s $25 billion real-estate development. “Hype,” “cheerful commerce,” “sparkle and retail” are all recent descriptions of the Hudson Yards used by The New York Times. Beyond legacy newspapers pointing out pomp and circumstance to obscure their own, even a publication like Business Insider is concerned about “just how unattainable the neighborhood is for most New Yorkers,” as one April headline read. In the face of these conditions, critique becomes a kind of enclosure. Until it doesn’t.

In 2010, the Metropolitan Transportation Authority leased air rights to the real-estate developers behind Hudson Yards. In 2013 the city, under then-Mayor Michael Bloomberg, allotted $50 million for the project. Built on New York City land and partially funded by a capital grant, Hudson Yards took taxpayer money to engineer a shiny new ’hood. Bloomberg himself, one of the richest people in the United States, donated $75 million to the effort, which might explain how the Shed, a 20,000-square-foot architectural marvel of a building, got to be his namesake.

But it was rezoning, and not cash proper, that made Hudson Yards legally possible in the first place: a 2005 New York City report that emphasized the city’s lack of office space called Hudson Yards the “one last frontier available in Manhattan.” Hudson Yards got $6 billion in tax breaks and other governmental subsidies as a result. That’s money to make the rich richer, the high rises higher, and the housing more luxurious. It’s easy enough to know some of this pernicious history before even stepping foot on the property. It’s harder to figure out just what the hell the Shed even is. Or even where. What the surrounding neighborhood is called depends on what billboard you look at: Condo ads have been trying to make “Manhattan West,” “West Chelsea,” and “Hudson Yards” happen.

Capitalism Is Responsible for Your Depressing Office Building

Whatever you call the project, both the mall and the Vessel (Hudson Yards’ public-art landmark—a spiral staircase to nowhere) consecrate the Shed’s place in an ecosystem of touristic commerce and capitalist worship. Aspiring to be an indoor Fifth Avenue, the seven-story shopping mall of Hudson Yards is not somewhere teenagers might hang out, window shop, and, in the language of the law, loiter. Instead, people sit on indoor “patios,” mimicking street life. The artifice is silly, but merely laughing obscures the reality that some people call and, others still, have no choice but to call New York home.

The Shed’s tagline is: “A new arts center creating and presenting original works of art across all disciplines, for all audiences,” and its programming is designed to reflect that purported plurality. To start with, the organization reserves 10 percent of tickets for residents who live in low-income neighborhoods. “Dis Obey,” which sounds like a caricature of teenspeak, is a literary program for writers and activists ages 16 to 19. One of the Shed’s opening programs was “Soundtrack of America,” a series of concerts by Kelsey Lu, Tank and the Bangas, serpentwithfeet, Moses Sumney, Samm Henshaw, Phony Ppl, and others about the impact of black music, directed by Steve McQueen. Other opening programs include Norma Jeane Baker of Troy, and Reich Richter Pärt, an audiovisual installation by composer Steve Reich and painter Gerhard Richter. Local independent bookstore McNally Jackson has an outpost in the Shed’s lobby where you can find texts of critical theory and the black radical tradition that are ripe for critiquing the tornado of art institutions and urban planning that converge in the Shed. Billionaires are funding the resistance.

Indeed, as Mayor Bill de Blasio said at the ribbon-cutting ceremony on April Fool’s Day, “The Shed will have it all. Theater, music, dance, film, galleries, performance space—you name it, it will be here.” Inasmuch as the word “all” is hard to fact-check, even more superfluous than “the public,” it is clear that the Shed has attempted to anticipate its own critique. To take from Stefano Harney and Fred Moten’s 2013 treatise on the university The Undercommons: Fugitive Planning and Black Study, one can only sneak into the museum and steal what one can. 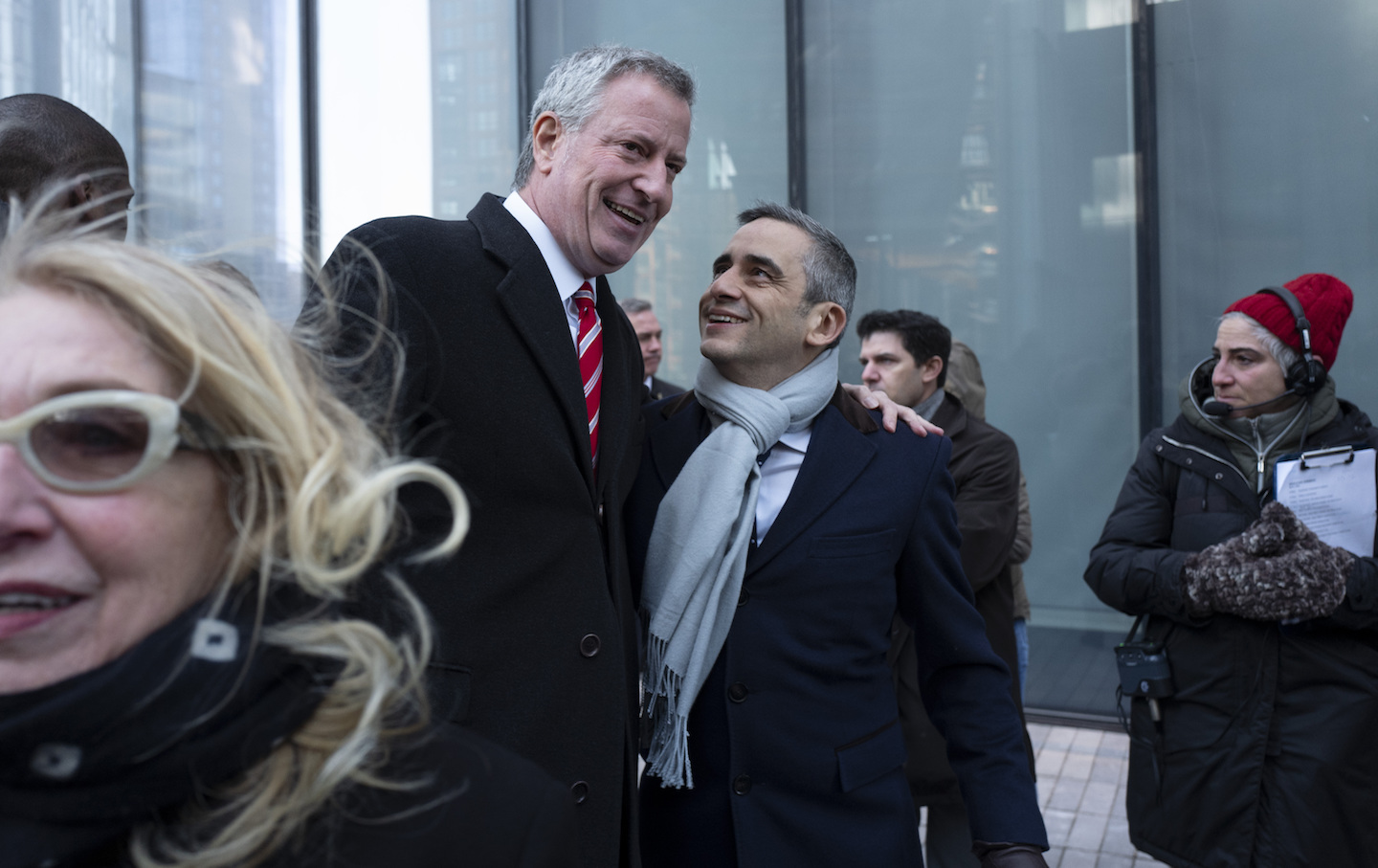 I’m still stuck on the name. Originally called the Culture Shed, the Shed tries to symbolize a work in progress, a backyard structure that houses tools, something simple, something ready to be worked on and worked through. At the press opening, the second-floor gallery that housed Reich Richter Pärt smelled like fresh paint, and the main performance space, the McCourt, had that new construction odor of wood chips. It was there where the chair of the Shed’s board of directors, Dan Doctoroff (Bloomberg’s former deputy mayor for economic development) misspoke and said “so money” instead of “so many,” when thanking the parties that made the Shed possible in the first place. The audience laughed, and I couldn’t help hearing Kendrick Lamar’s 2017 lyrics “Be humble, sit down” in my head.

We tend to lionize artistic and cultural institutions, but the history of museums especially has been twinned with the display of wealth. It was the French Revolution, the rise of democracy, secularism, and the professionalization of art history as an academic discipline that brought the advent of the public art museum, moving art away from religious and monarchic spaces. This shift was sustained by colonial expansion and capital accumulation in the colonies: that is to say, the pilfer of non-European territories. In other words, art is not and has never been pure, but the contemporary charade of social justice has attached a violent bewilderment to art-showing.

Philanthropists, billionaires, and companies spout the language of accessibility, diversity, and, most toothless of all, change. They talk the talk while actively making people’s lives worse through egregious labor practices, investments in mass incarceration, and a more general money-hoarding mentality. The history of cultural institutions shows us that perhaps there is no paradox here. One of the many bitter lessons that we have learned in the last century is that civil society is dominated by corporate interests. I mean, what is public programming without a public?

From the migrant-worker abuse of the Louvre Abu Dhabi to ongoing Decolonize This Place protests at the Whitney Museum against board member Warren B. Kanders, who is also the CEO of the disgustingly named Safariland Group, a manufacturer and distributor of “law enforcement and security products,” this is how we see and make art in America—up against a wall. Founded by Marcia Tucker in response to the corporatization of NYC’s artistic institutions, the New Museum is another case in point. Its response (or rather, nonresponse) to its staff’s unionizing exemplifies the seeming contradiction between an organization’s professed goals and its business practices. “The arts” has always had contradictory, limited, and frankly embarrassing use. As artist and writer Hannah Black wrote in Artforum in 2016, “Intellectualized or aestheticized trauma is displayed for institutional, artistic, or academic validation, but physical and emotional trauma goes untreated, because it falls outside the bounds of institutional relevance.”

The Shed brands itself as a “cultural center” and not a museum (too stale!), professing to encompass everything under the sun—a multidisciplinary space crossing the line between visual and performing arts. Artistic director Alex Poots, previously of the Park Avenue Armory, has several times used Chance the Rapper as an example of the popular art that the Shed wants to bring in next to the fine arts. This juxtaposition is supposed to be a mark of inclusiveness. “Chance the Rapper’s audiences are as welcome as Gerhard Richter’s,” Poots told The New York Times in 2017. “Both can be supported.” Anyone who even listens to the tiniest bit of hip-hop knows that Chance the Rapper is the palatable, respectable, churchgoing, father-identifying musician whom white middle-class parents might tolerate. As much as Poots tried, it is a cruel joke to think that the invocation of Chance the Rapper’s audiences is enough to gesture to those of us who are black, young, and poor. And yet Richter does indeed have a project running, and Chance, at the time of this writing, does not.