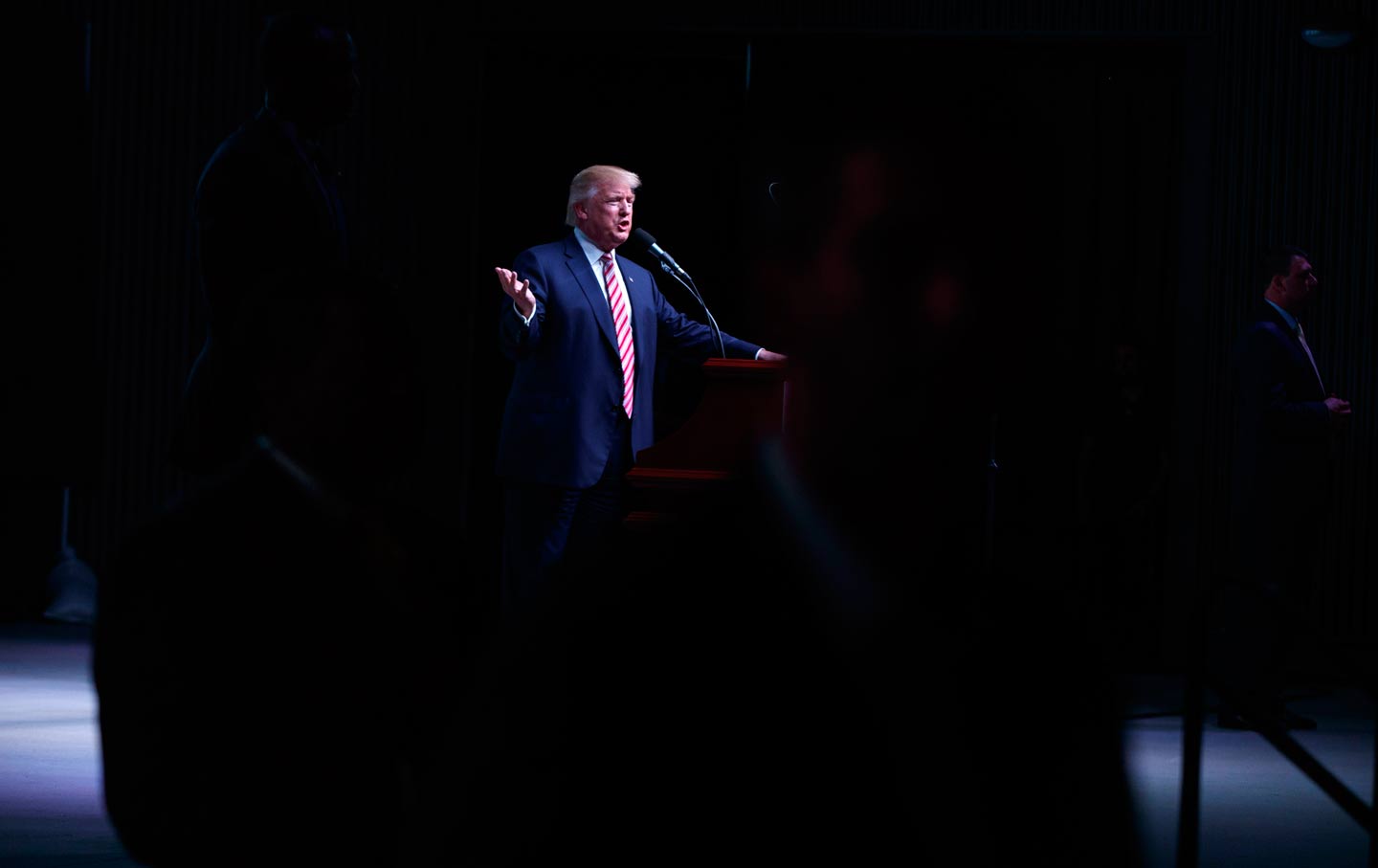 Donald Trump knows no rule of law. Whatever the Republican nominee for president does—no matter how wrong, no matter how vile—he absolves himself of responsibility. Yet if a rival displeases him, he proposes investigation, prosecution, prison time. Trump does not merely celebrate the totalitarians of other times and other lands; he seeks to impose upon the United States a strongman politics that even Republicans have noted—and fear. Last February, Nebraska Senator Ben Sasse broke with Trump, observing that “he displays essentially no understanding of the fact that, in the American system, we have a constitutional system of checks and balances.” Sasse added: “[Have] you noticed how Mr. Trump uses the word ‘Reign’—like he thinks he’s running for King? It’s creepy, actually.”

It’s gotten a lot creepier as the November 8 election approaches. The release of an 11-year-old tape of the alleged billionaire talking about how powerful men “can do anything” they want to women—grab them, grope them, “move on” them, “anything”—led the National Organization for Women to issue a statement with this headline: “Donald Trump Promotes Sexual Assault As a Rich Man’s Perk.” In and of itself, this makes Trump unfit for the presidency. “Someone with such disrespect for women, with such a misogynistic lifestyle who boasts about using his power to sexually assault women cannot—and will not—be the leader of this country,” said NOW president Terry O’Neill, as dozens of Republican congressional candidates abandoned their ticket mate.

Trump disqualified himself long ago with his xenophobia, his racial and religious bigotry, and his striking disregard for the Constitution. Yet his response to the tape revealed an even more menacing side: Trapped in a scandal of his own making, Trump lashed out during the second presidential debate at Hillary Clinton. As president, Trump said, he would “instruct my attorney general to get a special prosecutor” to investigate Clinton’s handling of e-mails. Clinton responded, “It’s just awfully good that someone with the temperament of Donald Trump is not in charge of the law in our country.”

Trump suddenly put aside talk of special prosecutors and investigations and announced that the real reason Clinton didn’t want him in the White House was “because you’d be in jail.” The candidate whose rallies frequently erupt with chants of “Lock her up!” smirked. His supporters—inspired by years of right-wing media and GOP leadership smears against the Clintons, Obama, and Democrats in general—cheered a statement that was antithetical to every historic and contemporary understanding of the American democratic experiment, in which elections are intense, even brutal, but not winner-take-all conquests.

There are countries where the winners of political fights have moved to jail their rivals. But those countries are not understood to be constitutional democracies. Indeed, as presidential biographer David Maraniss explained after Trump’s ominous announcement: “This is THE definition of fascism—Trump saying Hillary would be in jail if he were president.”

Donald Trump is a son of privilege with regal aspirations, a well-dressed grifter who has taken advantage of every loophole to avoid paying taxes, avoid paying contractors, avoid his responsibilities as an employer, and avoid accountability for his abuse of women. Yet there are still many Republicans, like House Speaker Paul Ryan, who make excuses for him—suggesting that, while they cannot defend his words or deeds, they will support his candidacy. These reckless partisans are fools. They imagine that Trump’s totalitarian impulses would be constrained by the presidency. But Trump has signaled, again and again, that this is not the case; that he is prepared to govern as an uncrowned king, a strongman, an authoritarian. Americans who disbelieve Trump do so at their own peril, and at peril to the Republic.