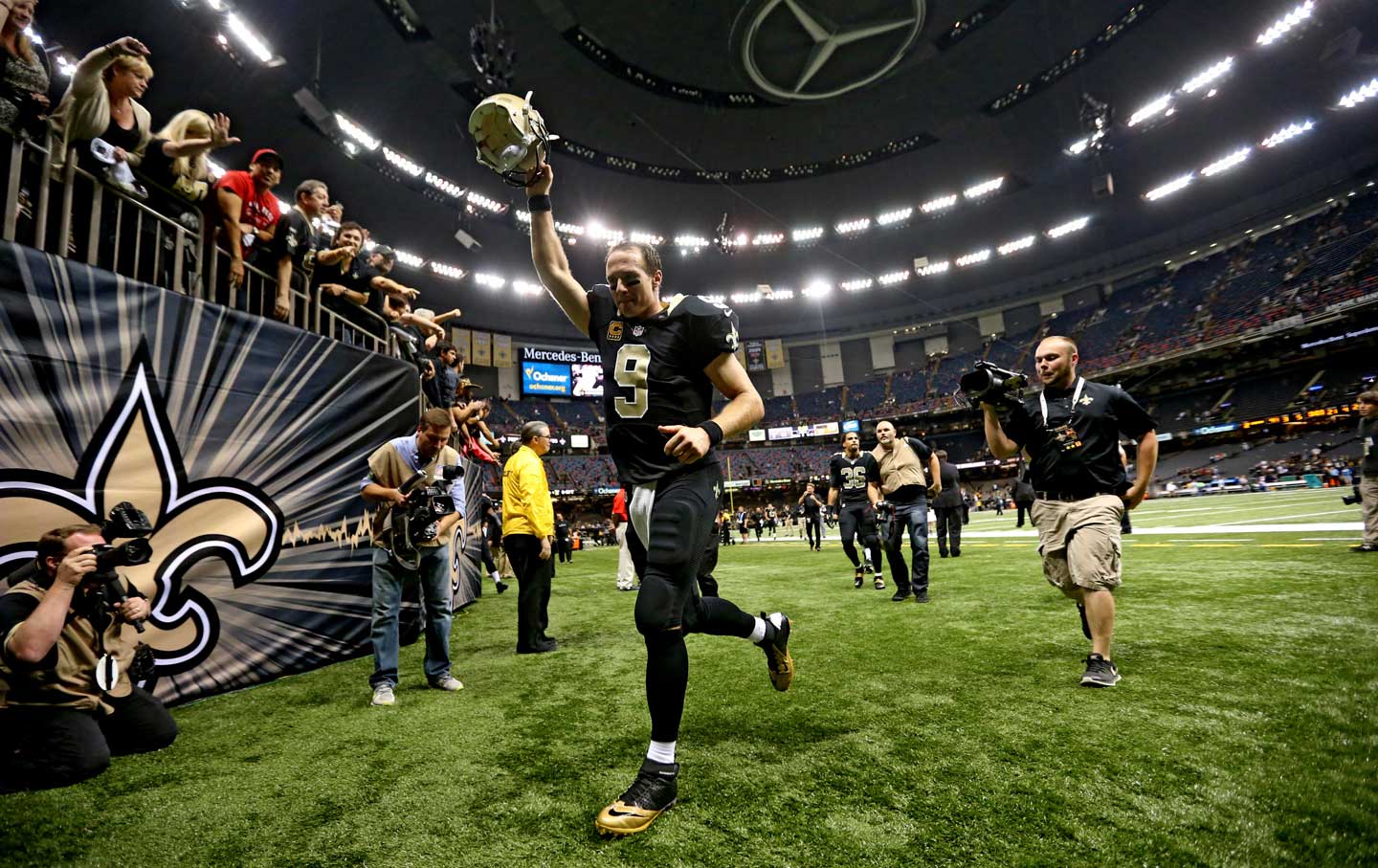 In 2009, Dashiell Bennett at Deadspin compiled four years of clichés about how the New Orleans Saints were somehow central to the “recovery” of New Orleans. The eerie part of these articles is how similar they are year after year, almost like the start of the football season meant that the leading publications needed to have one “Saints are Saving New Orleans” article “in the can” by Labor Day. This is how media organizations also handle obituaries: written in advance to avoid the slightest delay when announcing death.

As the 10th anniversary of Hurricane Katrina and the breaking of the levees is discussed this week, the well-worn narrative that “the Saints saved New Orleans” has continued endlessly, far more magnified than the pressing issues of poverty, racism, charter school failures, and displacement that still plague the city. The Saints narrative is like a game of video-friendly connect-the-dots: the Steve Gleason blocked punt, the U2 concert, the ascension of Drew Brees from mid-level quarterback with a bad shoulder to sure-fire Hall of Famer, the big Super Bowl win led by savior coach Sean Payton and an amazing defense. Each of these touchpoints has an ugly underside: Steve Gleason now bravely endures ALS, which the league refuses to admit was exacerbated by football. The Saints defensive MVP for that Super Bowl team, Darren Sharper, is now a convicted serial rapist in one of the more horrific crime sprees of gender violence in sports history. Sean Payton has struggled with Vicodin addiction and personal issues that are an open secret throughout the city. There was “Bountygate,” the scandal that wasn’t, which took away a year of this team’s prime window to become a double Super Bowl champion, and was, in retrospect, the first sign before Ray Rice and Deflategate that Roger Goodell was simply in over his head. There is Drew Brees, in that awkward twilight of his career where he still throws for a ton of yards but also too many picks, yet whose icon-status makes it impossible to let him go. And then there is U2, who at the time seemed to be an embarrassing choice to play during halftime at the Superdome when it reopened: about as representative of New Orleans as a gluten-free po’ boy. Yet in retrospect, they were a sign of things to come. U2 by 2005 was less of a band than a global brand, and New Orleans had already decided they would rebuild as a global city, open for business and closed to the poor who had been displaced.

More than all the Saints-themed retrospectives one could conjure, a simple poll tells the story of New Orleans today far more effectively. The best polls have the power to paint pictures, to transport a theory from the realm of opinion to fact. The Public Policy Research Lab at Louisiana State University produced such a poll. They found that “nearly four out of five white residents believe the city has mostly recovered, while nearly three out of five blacks say it has not, a division sustained over a variety of issues, including the local economy, the state of schools and the quality of life.”

The fact of the matter is, as The New York Times wrote, “African-Americans were far more likely to have lived in a flooded part of the city, and places that were worse-hit by the flooding, such as the Lower Ninth Ward, have taken much longer to recover.”

As for the New Orleans Saints, they have not so much saved the city as reflected the ways in which the city has changed. This was a team whose owner, Tom Benson, was looking to move out of the city before Hurricane Katrina, in search of public funding for a new stadium. He received that cash to stay in New Orleans, but only after the Superdome was ripped apart. That the Superdome was a FEMA funding priority was a slap in the face to the people who were waiting endlessly for federal funds to rebuild. It was a sign of how business was going to be done.

And yet… like Drew Brees, despite how erratic it’s all been, New Orleans is still one of the great cities on earth. It’s almost unexplainable how something so beautiful can still exist amidst so much mismanagement, so much vulture capitalism, and so much personal pain. The flaws are as thick as the humidity, yet in an era of carbon-copy cities, New Orleans is still all its own place. This is not a post-Katrina phenomenon but a function of its history: Its singularity has always been there in the architecture, the above-ground cemeteries, the food, the music, and above all else, the people. As much as they try to commodify this city, it is still a place apart. Similarly, in an era of carbon-copy football, there is Drew Brees, balding, pushing 40, barely six feet tall, and slinging the ball around like he’s still in it for the thrill. But that unique spark, while more durable than Brees, still needs to be defended. The vultures won’t be sated until it is consumed. The Saints players that love New Orleans should stand with the people in that fight, even if it means standing against whatever the NFL and their corporate partners have planned for the city’s future.