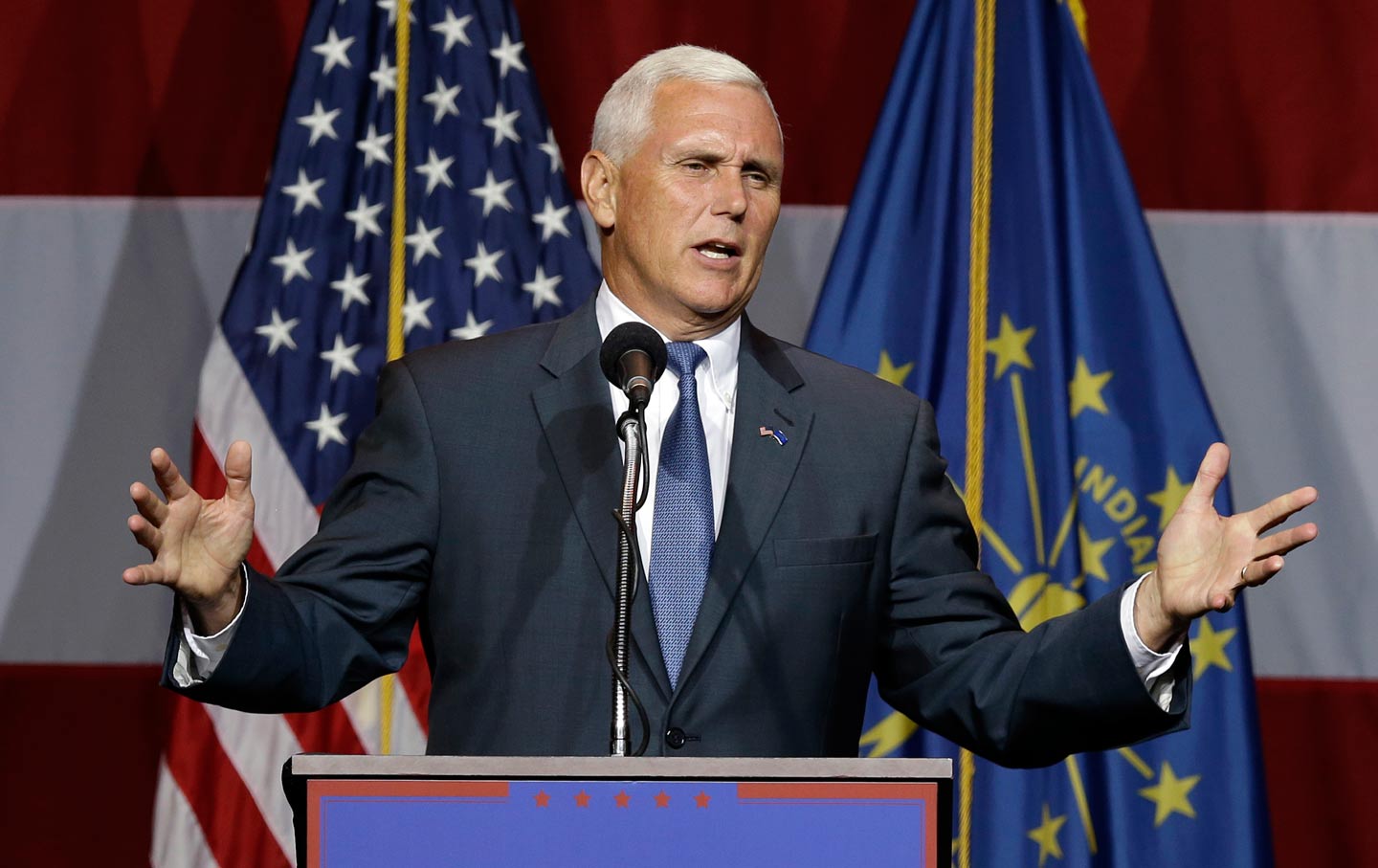 Vice President Mike Pence, one of the leading advocates for right-to-try legislation, at an election rally in Westfield, Indiana, on July 12, 2016.   (AP Photo / Michael Conroy)

During a campaign stop in Lancaster, Pennsylvania, in 2016, now–Vice President Mike Pence heard an emotional appeal from an 11-year-old boy whose father was dying of ALS, a fatal neurological disease with no known cure. The boy asked for Pence’s support for federal legislation giving people like his father a “right to try” experimental treatments without oversight from the Food and Drug Administration. Pence promised to “get it done.” Since then, a lobbying effort championed by Pence and recently joined by libertarian groups connected to the Koch brothers has made right-to-try a Republican priority. Trump endorsed the idea in his State of the Union address, and several bills are under consideration in Congress.

The principle behind right-to-try legislation seems difficult to argue with, particularly when it’s conveyed by desperately sick people. Why shouldn’t terminally ill patients who’ve exhausted all legal treatment options be allowed to use, at their own risk, promising drugs that are still working their way through the FDA’s approval process? But the wrenching personal stories obscure a few essential facts—such as, that the FDA already has a program known as “compassionate use” that offers a pathway to obtain experimental drugs. They also gloss over the history of the right-to-try movement, specifically the fact that it is driven by ideological groups interested in curtailing the FDA’s regulatory authority more broadly. Many health-care experts and patient advocates, even those who believe the terminally ill should have access to experimental medicines, argue that the right-to-try bills in Congress now would not actually help patients—rather, they crack open a door that could lead to a deeper gutting of our drug-safety system.

The right-to-try movement is driven by ideological groups interested in curtailing the FDA’s regulatory authority.

Right-to-try is largely the project of the Goldwater Institute, an Arizona-based libertarian think tank and legal organization. Goldwater works mainly at the state level to roll back what it sees as government overreach—whether that be Obamacare, limits on corporate campaign contributions, or “obstacles that keep medical professionals from providing the care they are trained to give,” in the words of the institute’s senior policy adviser Starlee Coleman. Goldwater sees the FDA as one of these obstacles; the institute argues that the agency is blocking dying patients from obtaining experimental therapies that might save their lives. Since 2013, 38 states have passed right-to-try laws based on model legislation crafted by Goldwater, which would allow patients to skirt the FDA and work solely with their doctors and pharmaceutical companies to obtain drugs in the very early stages of clinical trials. Though the state laws have had limited practical impact, they’ve helped right-to-try become a national movement.

A major problem with such legislation is that its foundational premise—that the FDA is preventing patients with no other options from using experimental drugs—is almost entirely devoid of hard evidence. Established in 1987 and since revised, the agency’s compassionate-use program approves 99 percent of the requests it receives, usually within a few days or 24 hours for emergency applications. While right-to-try advocates often claim that the paperwork takes 100 hours to complete, the FDA has streamlined the process and says the current version takes only 45 minutes. To apply, patients must have exhausted all other treatment options, find a doctor willing to treat them with an experimental drug, and then convince the manufacturer of that drug to provide it.

The bottleneck patients most often run up against is not the FDA but the drug companies themselves. “When access to a therapy is denied to a patient, it is generally the company that denies the request,” a group of nearly 40 patient=advocacy groups wrote to congressional leaders recently in a letter opposing right-to-try. Goldwater’s Coleman countered that this is still the fault of the FDA, which she believes “discourage[s] companies from having expanded access programs”; as evidence, she offered anecdotes about two doctors deciding not to submit expanded-access requests because of prior conversations they’d had with the agency. But the patient-advocacy groups (which include the American Society of Clinical Oncology, the Leukemia & Lymphoma Society, and Susan G. Komen) argue that when drug companies do decline to provide their products for compassionate use, their reasons “appear to be reasonable, such as a determination that the benefits do not outweigh the risks, an unavailability of sufficient product to offer outside of clinical trials, costs, or concerns about adversely affecting clinical trial enrollment.”

“The ultimate aim is a kind of libertarian paradise of deregulation.”

The right-to-try bills being considered by Congress do make a ham-fisted attempt to incentivize drug makers, by insulating them from legal liability and barring the FDA from using data on adverse outcomes to deny approval of a drug. Alison Bateman-House, an assistant professor at New York University’s Langone Medical Center and co-chair of a working group on compassionate use, said that those measures put patients at risk, leaving them vulnerable to unscrupulous companies, while they also fail to address the complex reasons why the compassionate-use program doesn’t work for all patients. Right-to-try is politically popular because “it sounds good and it promises a quick fix,” but “there are many, many, many barriers and, unfortunately there is not a simple solution,” she said. On Monday, Bateman-House and more than 300 other medical professionals, patients, and academics sent a letter to leaders of the House Committee on Energy and Commerce objecting to the right-to-try bills under consideration, arguing that the legislation “sells vulnerable patients and families false hope at the expense of weakening the FDA’s critical role in making sure that all Americans can have confidence in the safety and effectiveness of our medical products.”

Even Scott Gottlieb, the Trump-appointed head of the FDA, doubts that right-to-try legislation will help patients. “I think there is a perception that there are certain companies and products that aren’t necessarily being offered under the current construct and the right-to-try legislation might provide more of an incentive and an opportunity,” Gottlieb testified at a House hearing last year. “I don’t necessarily see that same opportunity because I think the biggest obstacle to offering drugs through expanded access is the supply constraints.”

In other words, it’s simply not true that there is a stockpile of potential miracle cures that could save the terminally ill, if only the FDA would get out of the way. The vast majority of drugs entered into clinical trials fail, either because they don’t work or because their side effects are too dangerous. If right-to-try legislation won’t do much for patients, what’s the point? “The ultimate aim is a kind of libertarian paradise of deregulation,” said Daniel Carpenter, a professor of government at Harvard and author of a book on the FDA’s history. With right-to-try, Goldwater and other supporters have started to reframe a dialogue about drug safety as one about “rights”—a legal metaphor that is “deeply resonant” in American politics, Carpenter said, and that could be used in the future to erode other patient safeguards. If people with terminal illnesses have a “right” to products with minimal safety testing, why not people with chronic diseases, or anyone else? “It begins to create a whole range of exceptions to the FDA’s gatekeeping power, which we’ve had for almost a century in this country, and which undergirds the confidence that Americans can have in the safety and efficacy of their medicines,” Carpenter said.

Goldwater dismisses the idea that right-to-try serves any interest but patients’. But the institute does not deny that there are other aspects of FDA oversight it would like to see loosened. Goldwater has already begun trying to weaken the agency’s marketing rules in a way that would allow companies to market products to doctors for unapproved uses. Again, Goldwater has adopted constitutional rhetoric to sell its policy, which it calls “free speech in medicine.” Last year Arizona became the first state to pass a version of Goldwater’s model legislation. The institute has also objected to the FDA’s oversight of compounding pharmacies, which was tightened after tainted drugs created at one such facility killed more than 70 people in 2012. Goldwater’s Coleman also told me that the FDA’s clinical-trial process had “gotten longer, more costly, and more complicated over time” and that it was probably not keeping up with advances in medicine. That concern is shared by Thomas Phillipson, an economist who sits on Trump’s Council of Economic Advisers; Phillipson has advocated for eliminating the final phase of clinical trials, which evaluates effectiveness, because it is burdensome to drug companies.

Many other supporters of right-to-try have explicit deregulatory aims. They include a number of groups affiliated with the Koch brothers, including Freedom Partners and Americans for Prosperity, which recently launched an ad campaign directed at members of Congress. The movement has also been boosted by a number of free-market economists, including several affiliated with the Mercatus Center at George Mason University, who argue for a broader regulatory rollbacks at FDA. Why not just “abolish the FDA” altogether?, one right-to-try supporter proposed in a recent op-ed.

We rarely think about the time, work, and money that has gone into ensuring that the medicines advertised on television won’t kill us, and that expensive prescriptions are truly effective. The benefits of America’s drug-safety processes are diffuse and indirect, making it difficult to mobilize people to defend them. Conversely, the right-to-try movement draws its political power from the concentrated, acute interests of the terminally ill—though it’s far from clear those interests will truly be served by the legislation now under consideration. “If it passes,” said Daniel Carpenter, “it will be the triumph of ideology over science.”12

Updated, February 14, 2018: This article was edited after publication to directly quote Starlee Coleman on the FDA’s clinical-trial process.