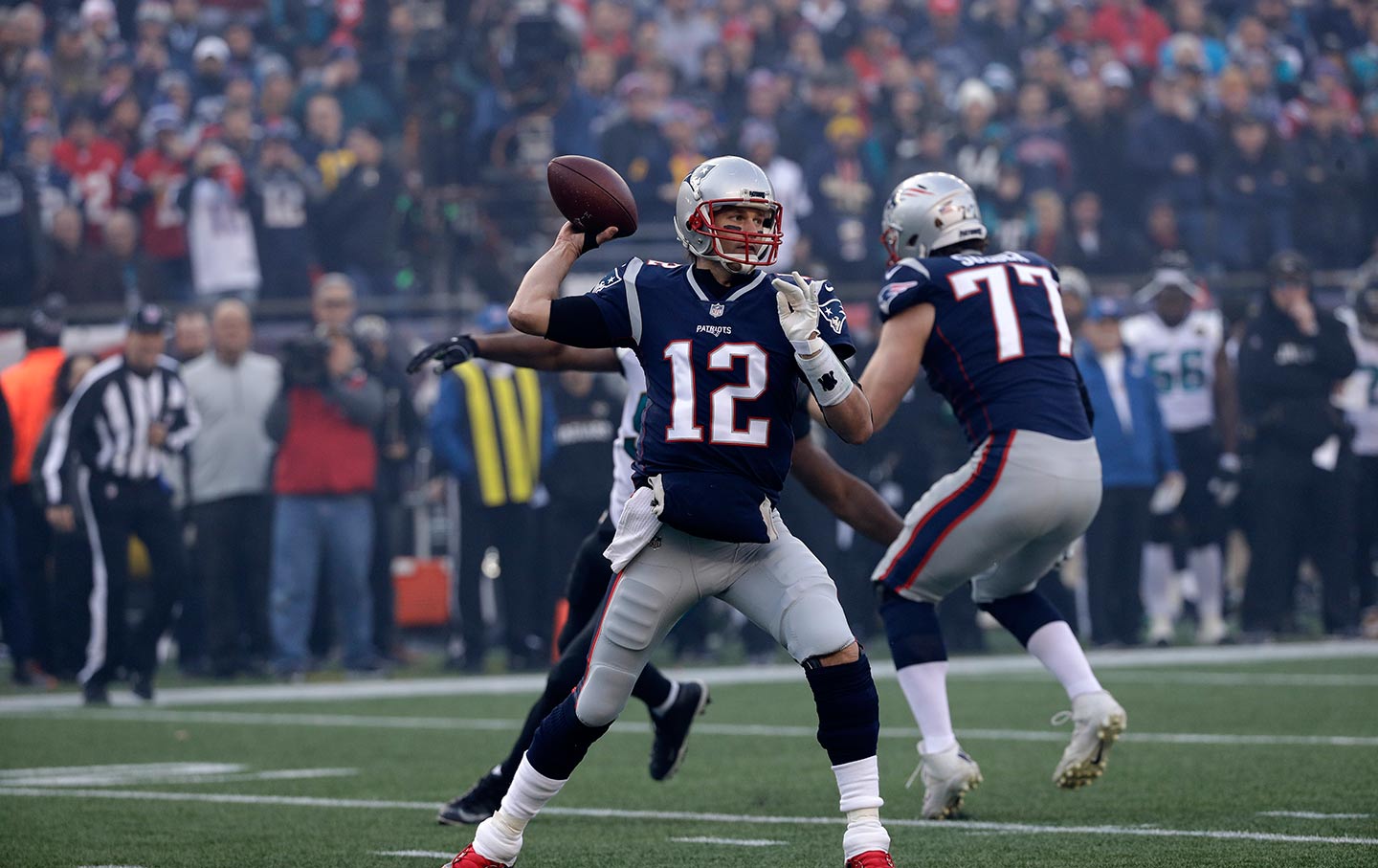 Setting aside football franchises named after racial slurs, the New England Patriots are my least favorite team in sports. It’s their annual dominance—now, in 2018, it will be eight Super Bowl appearances in 17 years—as predictively monotonous as a metronome. It’s their Hall of Fame head coach, the joyless hooded gnome Bill Belichick. It’s 40-year-old dreamboat quarterback Tom Brady and his carnival-huckster approach to physical health—for $99.99 you, too, can get the Brady pajamas with “bioceramic particles woven in to reflect back to the body infrared waves.” It’s the way referees seem to love them just a little bit too much for comfort.

The list is long, and I know I’m not alone in my disgust. Many have taken our resentment against this team and politicized it, saying in effect that a cheer for the Patriots is a cheer for the Trump agenda. They are viewed as Team Trump because their owner Bob Kraft gave a million bucks to Trump’s inauguration committee and has long touted their friendship. It’s because Belichick wrote a letter of support to Trump that Donald read aloud—almost certainly without Belichick’s approval—where he said, “You’ve proved to be the ultimate competitor and fighter. Your leadership is amazing.”

It’s the “Make America Great Again” hat hanging in Tom Brady’s locker in the summer of 2016 and Brady asking plaintively, “Why is that such a big deal?”

For people defending the franchise against these Team Trump charges, it also hasn’t helped that Nazi leaders have said that the Pats are their favorites because they are “consistently NFL’s whitest team.” (That’s not actually true, but facts have never stopped Nazis before.)

Yet I want to make the counter-argument to this. First and foremost, the idea that a team is somehow progressive or reactionary is absurd. Teams are products to be sold, not political totems. There are historical exceptions to this, but they are rare. When the Brooklyn Dodgers with Jackie Robinson won, it mattered because it smashed a hole through the pervasive, everyday white supremacy of the time. The same was true with the Celtics, when led by player-coach Bill Russell, or in 1989 when Art Shell of the Raiders was hired as the first black head coach in the NFL since the 1920s. When Colin Kaepernick was throwing for 16 touchdowns and just four interceptions in 2016, while also protesting police violence and being inundated with death threats, it mattered. Again, these are rare occurrences.

Most teams instead—no matter how many players they have taking a knee—are a mess of political contradictions. Yes, Bob Kraft is a bankroller of Trump, but he’s hardly alone, in NFL ownership ranks or among the billionaire class. Yes, he is also a close friend of Israeli Prime Minister Benjamin Netanyahu, donating millions to building a football stadium in Jerusalem. Again, these actions, while noxious, are hardly exceptional, as the NFL broadly has tried to foster a relationship with Netanyahu for years, and no amount of human-rights violations have deterred them.

Yes, their coach wrote Trump a mash letter, but he’s also done some unheralded work with black youth over the years and at least, unlike then-Bills coach Rex Ryan, he wasn’t introducing Trump at rallies.

As for the team, we would do well to remember last April when an unprecedented number of Patriot players skipped the White House visit for explicitly political reasons. As defensive captain Devin McCourty said, “Basic reason for me is I don’t feel accepted in the White House. With the president having so many strong opinions and prejudices…” That Brady also didn’t show was allegedly because of an illness, but it stung Trump enough that he didn’t even mention the quarterbacks’s name during his speech. These were hardly the actions of “Team Trump.” They were a gob of spit in his eye.

Then this past year, when Trump called for players protesting racism during the anthem to be fired and cursed their names, a dozen Patriots kneeled, even through boos that came down from the stands (again, these boos were hardly exceptional in NFL stadiums). Even Bob Kraft said he was “deeply disappointed” by the president’s speech, and he supported the players’ efforts to “peacefully effect social change.” Those words may sound tepid, but given their friendship, they were volcanic at the time, showing that Trump at least publicly was not going to break the NFL.

Outside of all things Trump, the Patriots last year became the first NFL team to sponsor an LGBT sports tournament, the Flag Football tourney called the Gay Bowl. As Cyd Zeigler of OutSports has written, “The Patriots have been one of the most LGBT-inclusive NFL teams, signing an amicus brief several years ago in support of same-sex marriage.” It’s worth asking Kraft why he could financially support a president whose record on LGBT issues is monstrous. But that doesn’t change the fact that the team has stood strongly with LGBT rights in a sport historically hostile to LGBT athletes.

These contradictions on the team mirror New England’s: a place that was a beacon of the abolitionist movement against slavery and a cradle of progressivism, yet also the home of the busing riots and a racism that runs red with blood throughout its history. Yet it has to be noted that every state in New England voted against Trump in 2016. In addition, when his alt-right, Nazi shock troops rallied in Boston, the response was epic, the most overwhelming counter-demo we have seen. You have to assume there was a Patriots fan or two in the crowd.

I cannot stand this team. But putting a political gloss on why they are so repellent is unnecessary. Hate them for their arrogance, resent them for their success, but politically they are as good and awful as any franchise in the hyper-corporatized athletic-industrial complex. That’s in many ways the toughest thing to face: The Patriots are just like our own favorite teams. Only better.