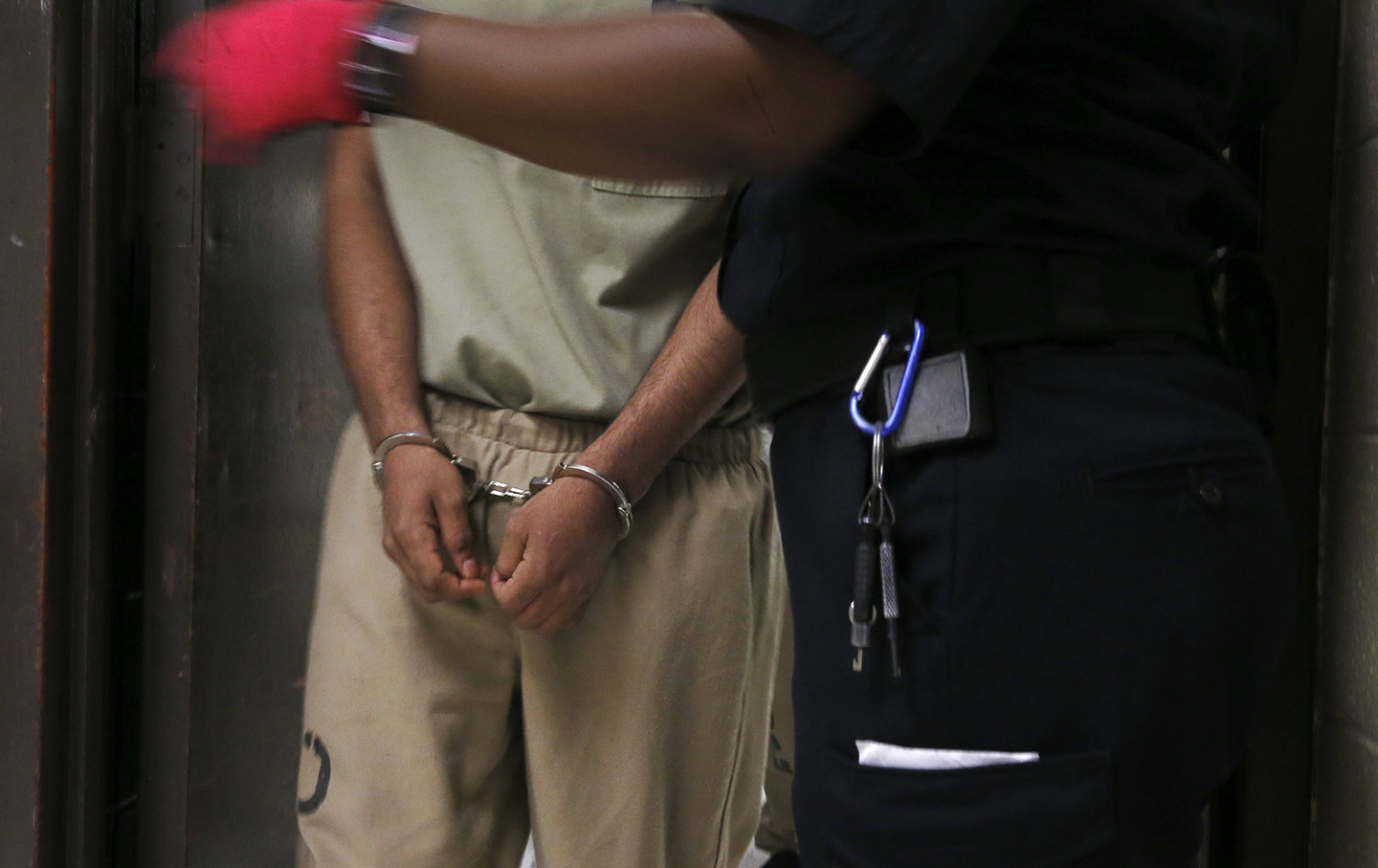 An inmate at the Cook County Jail in Chicago is escorted through a doorway by a security guard. (AP Photo/Charles Rex)

Vera Cheeks, a resident of Bainbridge, Georgia, was ticketed for rolling through a stop sign in 2014. The judge hit her with a $135 fine and ordered her to pay it in full immediately. Cheeks said that she was unemployed and caring for her terminally ill father, so the judge gave her three months to pay up, during which time she’d be on “probation.” He sent her to a room behind the courtroom, where a long line of people—all of them African-American—were waiting to pay money to a woman behind a desk. “It was like the twilight zone, totally mind-boggling,” Cheeks recalls.

The woman behind the desk told Cheeks that she had to sign a paper indicating that she had been placed on probation and now owed $267—the fine plus $105 for the (for-profit) probation company that would be monitoring her, as well as $27 for the Georgia Crime Victims Emergency Fund. When Cheeks refused to agree to the so-called probation and the additional sums, the woman—who, it turned out, worked for the probation company—told her that the judge would put her in jail for five days. Cheeks still refused, and finally the woman demanded a $50 payment on the spot if Cheeks wanted to avoid being jailed. Cheeks’s fiancé raised the money by pawning her engagement ring and Weed Eater lawn machine. That avoided the crisis for the moment, but Cheeks was told she would still be jailed if she was late on even one payment.

Cheeks went home furious. She says that people in town knew something was wrong, but they were all too scared to do anything. She Googled for three hours and found her way to Sarah Geraghty of the Southern Center for Human Rights, who used Cheeks’s case to challenge the threat of jail by private probation companies looking to extract exorbitant fines and fees from people who can’t afford them. Geraghty resolved Cheeks’s issue—and used the case to end Bainbridge’s illegal money-collecting scheme—by pointing out that incarcerating people unable to pay a fine was unconstitutional.

Cheeks was fortunate. She found a lawyer (and a great one at that) and was forced neither to pay an excessive fine nor go to jail when she couldn’t afford it. But many poor Americans aren’t so lucky. While most people in this country believe that debtors’ prisons are a thing of the past, Americans are in jail by the thousands for no other reason than being unable to pay a fine and its accompanying fees—which is unconstitutional, in many instances. Yet even when jail doesn’t ensue, the courts’ policy of garnishing wages and seizing tax refunds creates a prison of another kind. An estimated 10 million people currently owe a collective $50 billion in court debt.

Meanwhile, even more people are locked up pending trial on low-level misdemeanors or violations because they can’t afford the bail set for them. Altogether, roughly 500,000 people are in jails across the country simply because they are poor. These men and women haven’t been found guilty of any crime. Rather, most of them have merely been accused of low-level infractions that shouldn’t be crimes at all and that often don’t carry jail time. One result is that many low-income people plead guilty just to get out even if they are innocent, leaving them with a lifetime of collateral consequences. (For more on this, see “The Injustice of Cash Bail,” by Bryce Covert, in the November 6 issue of The Nation.) 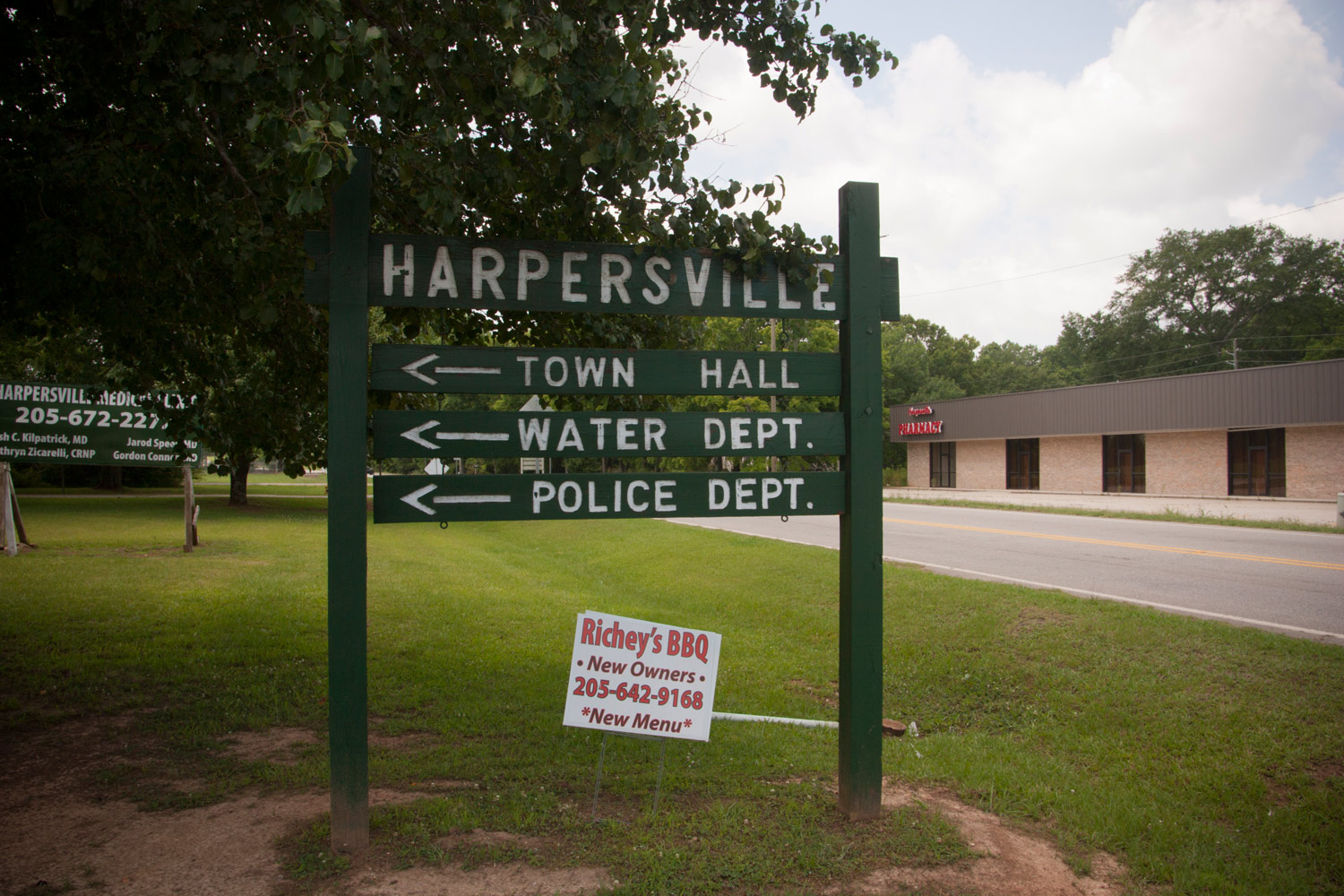 The Town That Turned Poverty Into a Prison Sentence

The criminalization of poverty has metastasized into other areas as well. We see it in the use of police officers as the front line of discipline in schools serving low-income students, leading to criminal records for behavior that could be dealt with in the principal’s office. We see it in the vigorous prosecution of vagrancy laws against the homeless. We see it in rules that bar ex-offenders from living in public housing. And we see it in the heartless practice of evicting poor women from their homes for calling 911 “too often,” even when they’re reporting domestic abuse. For far too many people, to be poor in 2017 is to live under the constant threat of incarceration for no other reason than poverty itself.

Many of these practices began with the Reagan-era anti-tax revolution and expanded during the Clinton era. States and local governments, starved for revenues, turned to their own residents—especially low-income people of color—to subsidize everything from courts and prisons to private probation companies, piling on higher and higher fines and fees. Oklahoma, for instance, assesses 15 possible fees, including a law-library fee and a forensic-science improvement assessment, for minor infractions like failing to mow high grass and weeds or drinking a beer on the front porch. Between 1996 and 2013, Florida added more than 20 new fees. The Justice Department’s report on Ferguson, Missouri, which revealed a system geared more toward gouging residents than public safety, opened the eyes of many to what is going on. But most people still don’t appreciate that Ferguson is everywhere in America today.

There is, however, a rising response. Across the country, a growing movement is pushing back, using everything from law to legislation to policy to dismantle the vicious circle of debt and incarceration that traps so many poor people.

Lawyers have been at the forefront of this push. These are attorneys like Thomas Harvey of ArchCity Defenders and Alec Karakatsanis of Civil Rights Corps, who in 2015 sued the city of Jennings, Missouri, just to the east of Ferguson, and succeeded in emptying the jail of its mistreated population. They also obtained $4.75 million for almost 2,000 people who had been locked up for a combined total of 8,300 days.

Around the same time, Karakatsanis, along with Sam Brooke of the Southern Poverty Law Center, won the release from jail of 60 people in Montgomery, Alabama, and the termination of the city’s debtors’-prison policy. Also in 2015, the ACLU joined forces with a private law firm to rescue Jayne Fuentes, who had been forced to labor on a local work crew to pay off her debts, from this unconstitutional treatment in Benton County, Washington. They also obtained a settlement that ended the county’s debtors’-prison system.

Litigation to abolish cash bail is also making headway. Karakatsanis won an enormous victory in Harris County, Texas, which includes Houston, where he challenged the widespread mistreatment of people during their arraignment. Federal Judge Lee Rosenthal accompanied her ruling with a 193-page opinion holding, essentially, that it is unconstitutional to assess excessive bail, since it creates two separate and unequal criminal-justice systems: one for the wealthy and another for the poor. The case is now under review in the Fifth Circuit Court of Appeals and has the potential to affect policy across the country.

Meanwhile, a new wave of policy reform has begun. State judicial leaders have taken a strong stance against high fines and fees and their consequences. They speak out publicly and lobby personally. Many legislators still claim that their cities and counties need the money, but elected officials are joining with chief justices and outside advocates to create change in states like California and Texas, to name just two.

Policy reform on bail is making progress, too. Based on careful research, states including Kentucky, New Jersey, Maryland, and New Mexico have adopted a methodology that helps determine whether an accused person will be a flight risk or pose a danger outside of jail. Not surprisingly, bail bondsmen and underwriters have been waging a fierce resistance to these changes. When bail reform was pending in Maryland, intense lobbying by both bail and insurance interests nearly killed it. More recently, bail-industry representatives filed two cases in New Jersey contending that the state’s reform is unconstitutional.

Still, the fight continues, including against some of the most entrenched structures. Rikers Island is a sprawling jail complex in New York City that holds people who have not been convicted of any crime, simply because they cannot afford bail. These include people like Kalief Browder, a young man who killed himself in 2015 after spending three years in Rikers without ever being convicted of a crime. After an intense grassroots campaign, Mayor Bill de Blasio has said that the city will close the complex, marking a profound victory. But the stated time frame for doing so is painfully long.

And so the effort to decriminalize poverty continues. As hundreds of thousands of people molder in jails for the simple “crime” of being poor, we must all call out the legislative irresponsibility that finances the courts on the backs of the poor, and we must stand up to the bail bondsmen and their underwriters, as well as the private prison industry and the correction officers’ union, which all profit off the misery of low-income people in a system where injustice reigns. Justice demands it.