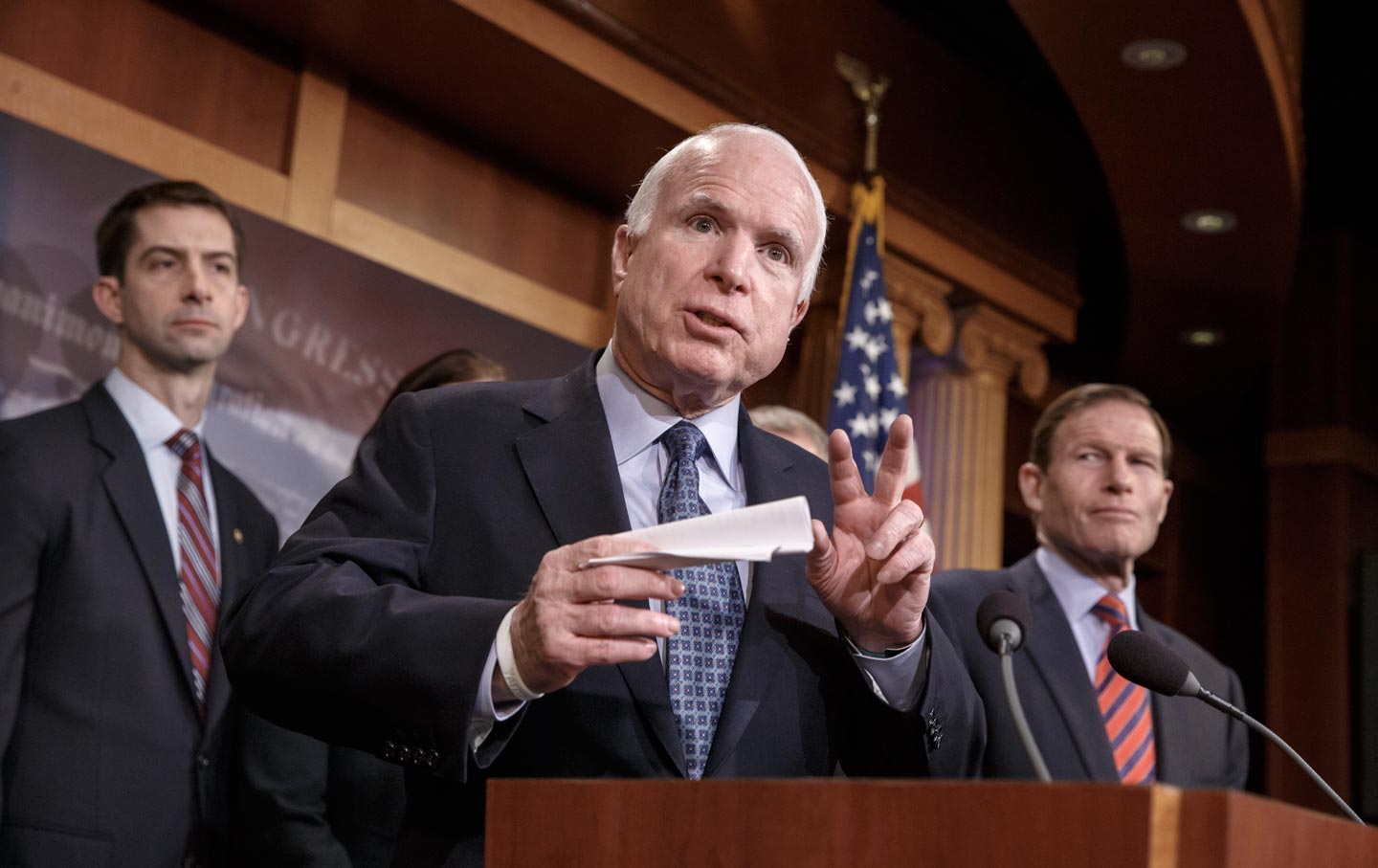 We are besieged, readers. As the archives of this magazine make perfectly plain, the spasm of Russophobia now threatening to overcome us is but a variant of the anti-Soviet paranoia that defined the 1950s and early 1960s. “We’re in the most dangerous confrontation with Russia since the Cuban missile crisis,” Stephen Cohen, the noted Russianist (and Nation contributor), said on Amy Goodman’s Democracy Now! earlier this month. This is just the point—the reality we must now consider with utmost seriousness.

The ever-greater risk of open conflict between nuclear powers that Cohen referred to is the most evident danger confronting us, but there are others requiring attention-paying people to bolt upright. Senator John McCain, oozing that faux-gravitas he likes to affect, asserts that anyone objecting to the anti-Russian orthodoxy is “lying,” and he wants a select committee to open hearings to investigate the CIA’s recent conclusion that Russia tampered with the US elections last month. The corporate press, from the government-supervised New York Times on over, now hastens to obscure the same shameful collaboration with power that it displayed in the Cold War’s depths. On a shocking website called PropOrNot.com, Salem witch-hunters who refuse to identify themselves list hundreds of media that they assert are manipulated by the Kremlin.

Read these, too, as danger signs. Anyone too young to remember the House Un-American Activities Committee and Red Channels and all the destruction they wrought ought to study up: We are a few short steps away from both. Russia is not destroying (what remains of) American democracy. “Patriotic Americans” are.

It is essential, as I suggest, to understand our moment in historical context. Then each of us must decide, just as those called before the HUAC had to: Do I acquiesce or participate in this freakish exercise in crowd control and fear-mongering, or do I repudiate a propaganda campaign as irrational and morally wrong as any concocted during the McCarthy years? At last the question confronts us, and it is especially acute this time for those self-described as progressives: Is one a descendant of that muddled, gutless lot known as Cold War liberals, or does one insist on clear sight and principle even in the face of the ideological blasts our corporate media deliver daily?

It is our minds that are the objects of this onslaught: They are finally what is at issue.

Think it through: This is the imperative of our moment—a significant moment, because the American propaganda machine is now unusually challenged. Its efficacy is no longer the certainty it was during the Cold War decades. My own view, to be clear straightaway, is without ambivalence. It is our minds that are the objects of this onslaught: They are finally what is at issue. Surrender yours to this most flagrant case of scapegoating—hatred and anxiety conjured from thin air—and your place in the history books will be with the ghosts of all the shrill Cold Warriors and cowering chumps of decades past.

“Russian aggression” has to go down as one of the great, pernicious phrases of our time—requiring no further scrutiny whenever deployed. The Russians invaded Ukraine and then stole Crimea without prior provocation. Now they threaten to invade the Baltic states. They cultivate extreme-right nationalists in Europe so as to debilitate the European Union. The Russians are guilty of war crimes in Syria. They have just invaded us, too, corrupting our democratic process and throwing the 2016 election to Donald Trump and his houseful of “Kremlin lackeys.”

This is the stuff of our reigning Russophobia. Let us try to identify what it is actually made of.

Every sentence in the above list has four attributes: (1) It is broadly accepted as fact just as written; (2) there is little confirmed, published evidence from impartial sources, if any, supporting it; (3) it is either one or another form of disinformation or misleads by way of omission—or both; and (4) it is a source of delusion. And in the matter of the last it is very weird. Our policy cliques do well enough deluding Americans to the effect that Russia now presents America with “an existential threat”—a thought Pentagon and NATO brass are making common currency, believe it or not—but they appear to think a nation deluded by their incessant repetitions is somehow a fine and sturdy thing. Deluded people do not generally do well, in my experience.

Now, one by one and briefly:

Point 1 for all Russophobes, but especially the “progressive” variety: There are costs attached to this swoon into perfect gullibility. It leaves the door open to worsening what is already a dangerous level of global tension, and chief among those served are the Pentagon, its NATO subsidiary, military contractors, and Capitol Hill warmongers who act in behalf of these three. Ask yourself, liberal: Is this where I line up? Suddenly you are willing to take the CIA’s word for anything at all? You accept what the Times publishes as true—and the complete truth, nothing left out—because it is in the Times? Given the historical record in both cases, this is very odd. So is the fact that capital “D” Democrats are now leading the Russophobic charge. That used to be the work of rightist reactionaries. One feels like Rip van Winkle, awakening to find the world a different place.

Most of all, the reigning Russophobia worsens America’s creeping isolation in world affairs—evident for years but rarely mentioned among us, and so another of our delusions. At bottom, Washington still operates according to Bush II’s “with us or against us” construct, and the world’s vote starts to tilt toward the latter. In the end, the Russians will not be a lonelier people as a result of our efforts. We will be.

This swoon into gullibility leaves the door open to worsening what is already a dangerous level of global tension.

There is no clearer case than Aleppo. In the Syria context, your mind is the object of a propaganda campaign straight out of Edward Bernays, as already suggested. Now our “moderates”—kindly democrats who shoot fleeing civilians and bury them in mass graves, among much else—are cleared from their east Aleppo stronghold, and what have we got? We have Russia, Iran, and Turkey convening in Moscow, pointedly excluding the United States while declaring themselves guarantors of a political settlement in Syria. And we have the Obama administration’s admirable response: Nah, that’ll never work. Now watch as we do our best to obstruct it.

We come to the consequential matter of lost opportunity. Russophobes can carry on about the evils of Russia and its leadership all they like, but it comes, once again, at a cost. The reality is that until Washington learns to cooperate with Moscow on many, many issues of common interest, solutions will elude it; in notable cases—Ukraine, Syria—the cost is to be measured in lost lives and destroyed societies. The Obama administration has spent years ever more pointedly diminishing Russia as no more than a regional power. Let us at last mark this down as another delusion—this one among the more destructive.

Lesson No. 2 for Russophobes and all liberal fellow-travelers: You assume certain responsibilities as you cast Vladimir Putin as Beelzebub. And as you do, you are the fools of those addicted to great-power rivalry and the “indispensable nation” narrative.

For the record: Anyone capable of dispassionate thinking—hello!? anybody home?—will recognize the Russian president as a serious, effective statesman with an impressive grasp of history and the forces shaping it. This does not require liking him, I should add. He has been proven right about a lot of things—one reason, indeed, the policy cliques in Washington urge us all to detest him. In my view, Americans must consider the Russia question as one of primary and secondary contradictions—greater and lesser antagonisms. Russians, along with everyone else, have numerous domestic problems, and for too many non-Russians these are preoccupations. But Russia’s problems are for Russians to resolve, as I have argued many times, and they are secondary to that defining issue of our century, parity between West and non-West.

To understand Russia and its leadership in the above-sketched frame is to come face to face with the odiousness of our Russophobic majority and question why anyone going by the label “progressive” is part of it.

Our current run of Russophobia is but the latest chapter in a very old story.

“There are now but two great nations—the first is Russia, still barbarian but large, and worthy of respect…. The other nation is America, an intoxicated, immature democracy that knows no obstacles. The future of the world lies between these two great nations. One day they will collide, and then we will see struggles the like of which no one has dreamed of.”

Just my luck, I think, whenever I reread that passage.

It is Charles Augustin Sainte-Beuve, the French historian and critic, writing, with exceptional prescience, in 1847. It is among the earliest expressions of the animosity now, just about 170 years later, playing out before us. Six years after Sainte-Beuve wrote, a German thinker was the first to call for a union of European nations against czarist Russia’s rise. Then came some heavyweights, among them Nietzsche and Jules Michelet, the celebrated French historian (but who looked upon Russians as subhuman, to his discredit). By the 1870s, the idea of “the West”—a trans-Atlantic union now—was fully ascendant. It was, then, formed in reaction—a defense from the first against “the Other” of the East.

This is the history we ought to know now. It is our history. During the Cold War, the long-brewing crisis between Sainte-Beuve’s “two great nations” reached the point when we were willing to say, via our nuclear options, that human life itself was not as important as our triumph over the East as represented by the Russians. Our current run of Russophobia is but the latest chapter in the story.

And now our obligations ought to be plain. The first is to see clearly. It is to “go beyond our past,” as Nietzsche once put it. The second is to recognize contention between West and non-West for what it is: A pointless exercise rooted in the notion that only one political and social model will fulfill humanity’s aspirations. The third is to refuse to take up and prolong this fruitless struggle. It is to abandon it in the name of global diversity, a multiplicity of preferences and forms. This is the 21st-century task, and the loud, crude bout of Russophobia now threatening to envelop us is nothing but resistance to it.