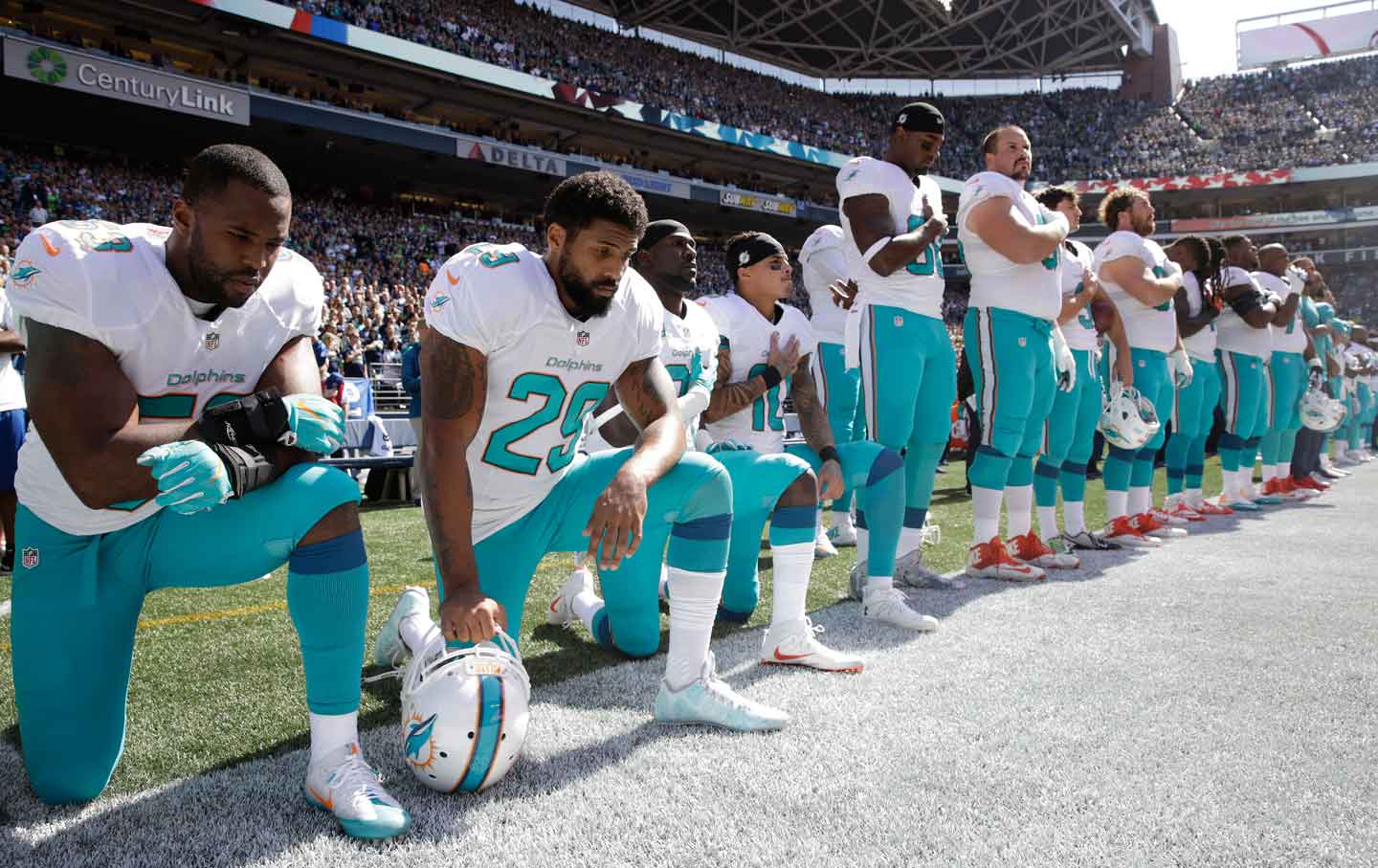 Four of the Miami Dolphins take a knee during the national anthem at their game against the Seattle Seahawks on September 11, 2016. (AP Photo / Stephen Brashear)

On Sunday, a small group of National Football League players risked their careers, their endorsements, and their livelihoods. They did so through the simple act of refusal. They refused to be a prop for the cameras. They refused to swallow their concerns about racism and police violence in order to please the needs of their employers. They refused to be intimidated by sports-radio talkers bashing their character or an online army of shameless thugs threatening their lives with the casual click of someone ordering a book from Amazon. They stood in the proudest tradition of athletes who have used their platforms for social change, and they have already felt a backlash that would ring familiar, almost note-for-note, to anyone acquainted with what that last generation had to endure.

Before naming the players who chose to stand against the current, it is worth setting the stage. Sunday was less a current than a red, white, and blue tsunami. This was opening day for the NFL—by an exponential degree the most popular sports league in the United States—and it was also September 11, 2016, the 15th anniversary of the horrific attacks on the World Trade Center and the Pentagon. Those attacks killed thousands of innocent people. They also launched an unprecedented assault on civil liberties, the scapegoating of an entire religion, and an illegal war in Iraq that continues to produce an unfathomable body count. The leader of these atrocities, George W. Bush, should have had to answer for his actions. Instead, he was there on Sunday in Arlington, Texas, tossing the coin for the nationally televised game between the Dallas Cowboys and New York Giants. The Cowboys were not alone in bringing out—literally—the big guns. President Obama spoke over the Jumbotron in Seattle and Vice President Joe Biden was live in Philadelphia. Every stadium had troops march onto the field with flags roughly the size of Rhode Island. Warplanes flew overhead. Bald eagles—actual, real-life bald eagles—were even set free to soar for the cameras.

Like those majestic eagles, the NFL has ascended to new heights these last 15 years by pinning the image of their league to our permanent state of war. The Pentagon has made sure that this has been a mutually beneficial relationship, tying military recruitment, staged “salute the troops” events, and a hyper-militarized form of patriotism to the NFL’s brand. Journalist Shaun Scott wrote a masterful excavation of this last week on Sports Illustrated’s website, in an article titled “How the NFL sells (and profits from) the inextricable link between football and war”:

It didn’t matter that NFL players such as Cardinals safety Pat Tillman and Rams center Jason Brown criticized the war; or that actual veterans detested insulting comparisons between the vicissitudes of combat and the triviality of sport.

What mattered was that subcultures like tailgating, fantasy football, and gambling helped the NFL become more popular than ever, and that this popularity coincided with — and exploited — the escalation of America’s wars in Iraq and Afghanistan.

In other words, nothing that happened Sunday, with its big budget patriotic pageantry, should have surprised anybody. It was business as usual. The true shock and awe was the presence of a small group of players who took that moment to instead express dissent. To be clear, these were not gestures against war or the national-security state. They were acts of solidarity with San Francisco 49ers quarterback Colin Kaepernick’s anthem demonstrations against police violence. They were protests aimed at stating the simple idea that there is a gap between the values that the flag claims to represent and the deadly realities of racism. They were also—whether intentionally or not—declarations that they would not be intimidated by the backlash felt by Kaepernick or Broncos linebacker Brandon Marshall, who took a knee on Thursday and promptly lost an endorsement deal.

As “The Star-Spangled Banner” played around the country, two players on the New England Patriots: Martellus Bennett and Devin McCourty; three players on the Tennessee Titans: Jurrell Casey, Wesley Woodyard and Jason McCourty; and Marcus Peters of the Kansas City Chiefs raised their fists during or immediately after the anthem played. In addition, four players on the Miami Dolphins—Kenny Stills, Michael Thomas, Arian Foster and Jelani Jenkins—took a knee during the national anthem. The Dolphins’ gesture was all the more dramatic because it took place across the field from the Seattle Seahawks, who linked arms in a gesture of “team unity and solidarity” after their efforts to make some sort of statement about police brutality were snuffed out because, according to the reporting of NFL Network’s Ian Rapoport, “#Seahawks originally planned to kneel together, hand over their hearts, during the anthem. But some players close with military objected.”

Never mind that these protests have had nothing to do with the military. But that mere perception was enough to suppress a small group of proudly outspoken Seahawks players who wanted to show Kaepernick that they were on his side. The endless howl that any action on Sunday should be interpreted as being “against the troops” and disrespectful to the memory of 9/11—no matter the words of actual troops or 9/11 families—stretched from a sector of the Seahawks locker room to anonymous Twitter bigots to celebrities Rob Lowe and Kate Upton. It’s an absurd argument, meant to derail and delegitimize the actual issue that’s being raised: the extrajudicial killings of black people.

The best response to this came from Kaepernick last month when he said:

I have great respect for the men and women that have fought for this country. I have family, I have friends that have gone and fought for this country. And they fight for freedom, they fight for the people, they fight for liberty and justice, for everyone. That’s not happening. People are dying in vain because this country isn’t holding their end of the bargain up, as far as giving freedom and justice, liberty to everybody. That’s something that’s not happening. I’ve seen videos, I’ve seen circumstances where men and women that have been in the military have come back and been treated unjustly by the country they have fought for, and have been murdered by the country they fought for, on our land. That’s not right.

The pressure to fall in line was strong enough to compel a group of political players in Seattle to back down from their planned protest. But the capitulation of the Seahawks was overshadowed by these other gestures, which defied not only the political agenda of the league but also its top-down corporate structure. They are gestures that stand as a rebuke to those in the NFL audience who cheer for black bodies on the field, but rage against black voices. Jay Busbee at Yahoo! Sports called Sunday’s events a “quiet insurrection.” It is an apt description, with one caveat: This is an insurrection we can only see if we get beyond the noise.