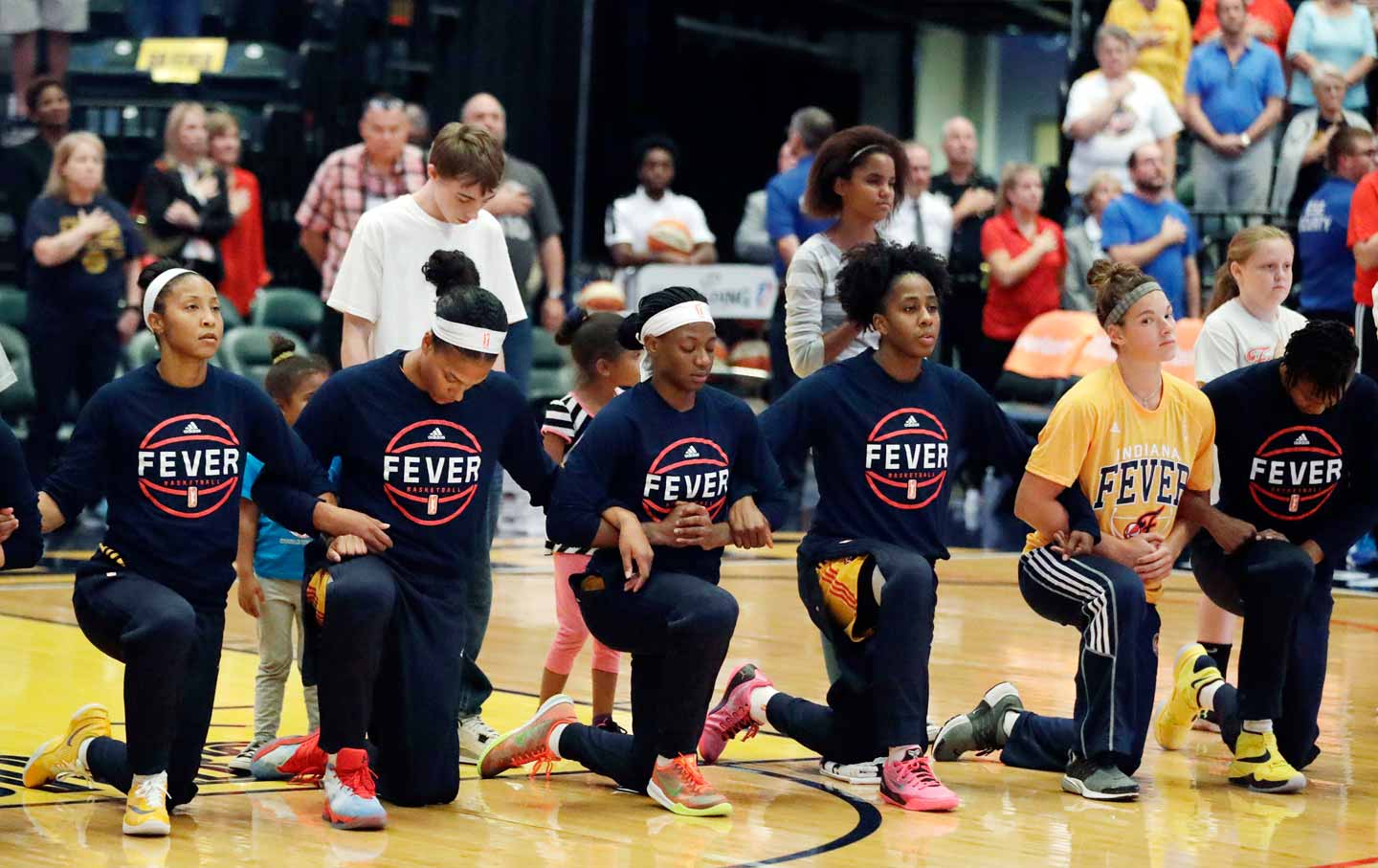 Members of the Indiana Fever kneeling during the national anthem before a playoff game against the Phoenix Mercury on September 21, 2016, in Indianapolis, Indiana. (AP Photo / Darron Cummings)

Four weeks ahead of the start of basketball season, the NBA and the National Basketball Players Association have issued a joint statement to all players in what appears to be an attempt to prevent the Colin Kaepernick–inspired anthem protests from hitting the courts.

The memo, signed by league commissioner Adam Silver and union head Michele Roberts, asks NBA players to contact the league or the union if they are looking for ways to make “positive change” in response to racist police violence. It assures players that “working together, [the league and the union] have begun developing substantive ways for us to come together and take meaningful action.” Without specifically mentioning the anthem demonstrations, it reads:

These ideas are based on the actions many of you have already taken or supported, including convening community conversations in NBA markets to engage young people, parents, community leaders and law enforcement in a candid dialogue.

Unlike the NFL, the NBA actually has explicit rules against anthem protests. Currently the rule book states that “Players, coaches and trainers are to stand and line up in a dignified posture along the sidelines or on the foul line during the playing of the National Anthem.”

Rather than warning players against challenging the existing rules, the NBA is trying, as described by Matt Moore at CBS Sports, to “support the players, but also…prevent incidents that could harm their image or sponsor relationships.” They’re using honey instead of vinegar in their effort to maintain the court as a space where the league has political and commercial hegemony.

NBA players have their WNBA counterparts to thank for this. Over the summer, the legal office of the WNBA—on orders from the NBA—tried to fine players for wearing political T-shirts. When the players went public, refusing to pay the fines and refusing to speak to the media about anything other than issues pertaining to police violence, the fines were rescinded.

And the momentum is growing. Just this week the entire Indiana Fever team—players black and white—took a knee during the anthem in a playoff game against the Phoenix Mercury.

After the successful struggle of WNBA players, the league and the union have taken a different approach—reaching out instead of cracking down—to stop protests. But it doesn’t seem likely to work.

Several players have already expressed excitement at the prospect of joining in. Cleveland Cavaliers guard Iman Shumpert said, “You best believe I’m going to take me a knee for the anthem.”

The NBA’s reigning Coach of the Year Steve Kerr of the Golden State Warriors, said he expected NBA players to take some sort of stand on the issue and he would support them.

“No matter what side of the spectrum you are on, I would hope that every American is disgusted with what is going on around the country.… Unarmed black people are being killed indiscriminately around the country. And that’s what happened two days ago. That’s the message. That’s what matters. Everyone should be trying to do something, whatever is in their power, to help in that regard.”

Given the events of the last week, it’s hard to imagine that players for NBA franchises in Oklahoma City or in Charlotte won’t be inspired to take a stand.

Adam Silver and Michelle Roberts might be in a state of consternation in anticipation of the public response to the sight of protesting players, not just on every Sunday but potentially every night for six solid months.

But I think they would be wise to recognize that these are not normal times. Taking protest to the court is better for the NBA than if the players look at the world, recognize their economic contributions to cities around the country, hear the calls to boycott NBA cities like Charlotte, and choose not to play at all. The league needs to realize that many players today are driven by motivations beyond money.

They are saying, “No justice, no peace.”