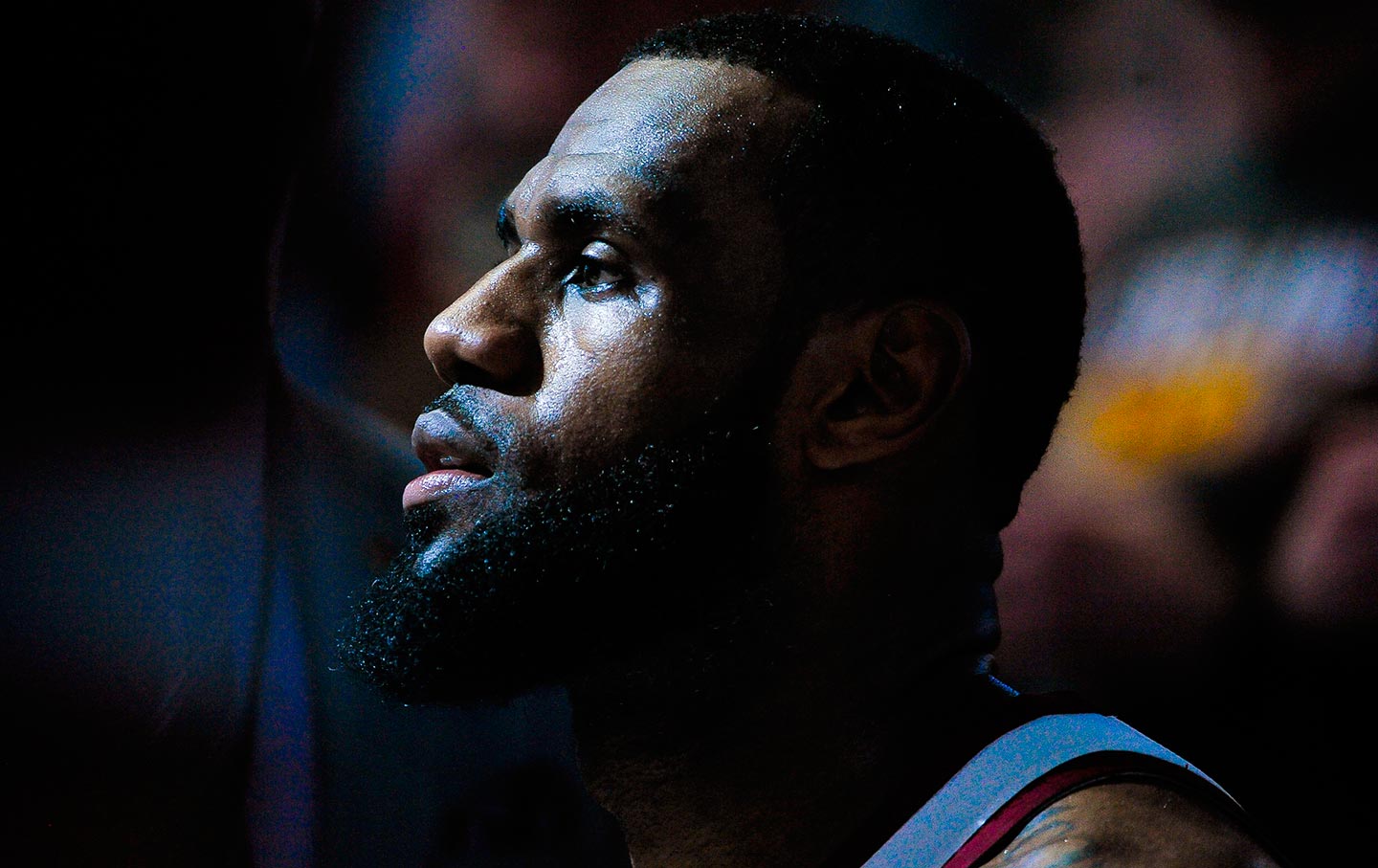 Howard Bryant, author of the forthcoming book The Heritage: Black Athletes, a Divided America, and the Politics of Patriotism, once said the following to me, and it has tattooed itself on my brain: “The difference in the sports world between today and 20 years ago is that in the 1990s, if something horrifically racist happened, we would have been shocked if Michael Jordan said something. Today we would be shocked if LeBron James and others didn’t say something.”

Monday saw the collision of the national holiday to honor Dr. Martin Luther King Jr. with the aftermath of yet another racist dirge from the Oval Office. As a bonus, the president branded himself as “the least racist person.” Again, the shock would have been if LeBron and other voices of resistance in the NBA had said nothing. When King James was asked about Dr. King he said, “He literally took a bullet for us.” Then LeBron—and again, I would have been surprised if he had done otherwise—transitioned without prompting to the current moment, saying,

And for us to stand here even though we’re trying to be [divided] right now by somebody, today is a great day for people to realize how America was built and how we all have to stand united in order to be at one…. Like I said before, we are in a difficult state right now as Americans as well with the leader of our country. But us, like I said, no matter the religion, no matter the shapes and sizes, we all have to continue to come together and shine a brighter light on, you know, I mean, (I don’t want to) use the word stupidity, but that’s basically what it comes down to…. The guy in control has given people and racism, and negative racism, an opportunity to be out and outspoken without fear. And that’s the fearful thing for us because it’s with you, and it’s around every day, but he’s allowed people to come out and just feel confident about doing negative things…

It wasn’t just LeBron. Spurs Coach Gregg Popovich, in obvious reference to Trump’s “least racist person” comments, said, “Every time I hear somebody say they’re not a racist, you know they are.”

Pistons Coach Stan Van Gundy spoke about how the current moment is both aggravated by Trump yet also bigger than one person, saying to The Undefeated:

Sadly, though, I think the 50th anniversary of his death finds us going backwards on the issue of racial equality. The Voting Rights Act has been largely dismantled. Men of color, and even boys of color, face systemic inequality in the justice system, and we used the war on drugs to lock up a generation of black men. Affirmative action is being torn down. Police are killing men like a modern-day Bull Connor, and economic equality is headed in the wrong direction.

Marches like Charlottesville are disturbing. It used to be that the KKK wore hoods, embarrassed to reveal their identity. Now people with racist beliefs proudly march in the open and are not even repudiated by our president. So yes, we honor King and all that he sacrificed and all that he accomplished. But if we truly want to honor him, we must get back out and fight like he did against the now-resurgent voices of racial injustice, discrimination and hate. I think 25 years ago King might have been happy to see some progress. My guess is today he would be in tears over where we are headed.

Even Shaquille O’Neal, who has hardly been out front on this emerging consciousness, quoted King in the NBA’s pregame broadcast and said, “A nation that continues year after year to spend more money on military defense than on programs of social uplift is approaching spiritual doom.”

The list goes on. These comments reflect a push by very-high-profile players in the NBA to push beyond what Cornel West calls the “Santa Clausification” of King. They also put the league in stark opposition to this administration, which spent the day tweeting admiration for King while practicing ugly racism in word and deed.

As this administration deteriorates, there is now an expectation that these players and coaches will articulate our anger at the reality of racism-without-consequence in the White House. It’s not fair and certainly not healthy for a functioning left to have its eyes constantly turned to the sports world. Protest is not a spectator sport, and athletes historically have been most effective at amplifying already existing fightback in the streets, not substituting for struggle.

But at this moment, nature abhors a vacuum and these players are filling that absence of leadership along with unions and various social movements, and voicing a rage that is still finding physical expression. The NBA community has, consciously or not, taken on a serious burden because the thing about political leadership is, once you exercise it, people will begin to expect it.