New York, NY—January 9, 2018—The Nation, America’s leading source of progressive politics and culture, marks the one-year anniversary of Donald Trump’s presidential inauguration with a special issue, “The Resistance Turns One” (January 29/February 5, 2018, cover date; on stands January 22; advance PDFs available upon request). Editor and publisher Katrina vanden Heuvel and select contributors are available for comment on the divisive and dangerous presidency that has developed since January 20th of last year—and what comes next: reconstruction and rebuilding power. 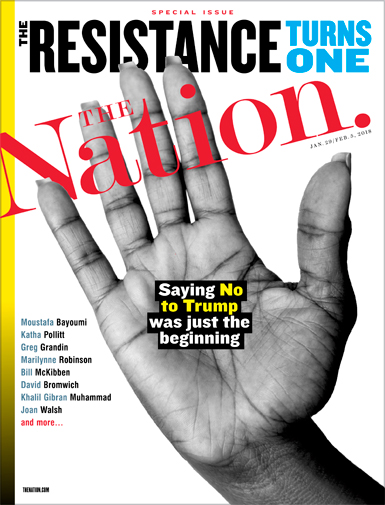 “The Resistance Turns One” frames the arguments that underpin the resistance to Trump, his appointees, and his corrosive agenda. Yet understanding that resistance is not enough, the issue also elevates the policies and players doing exciting work at local and national levels.

“As he marks the end of his first year in office, Donald Trump, the self-proclaimed ‘very stable genius,’ stands astride the political world like a cartoon dybbuk, an orange menace of terrifying impulsiveness,” writes celebrated progressive activist Robert Borosage in his introduction to the issue. “With his tweet-spasms spewing venom on adversaries, his reckless fomenting of racial division, his unending lies, and his predilection for vulgar schoolyard taunts, Trump fuels rage and resistance. In the end, however, he is a weak president, more clown than despot.”

Founded by abolitionists in 1865, The Nation has long served as a chronicle of America’s historical memory and a champion of the country’s democratic promise. Since the election, we’ve been at the center of the work to make sense of this political moment—both Trump’s tenure and the broader political landscape. Supplementing our journalistic mission of truth-telling and deep reporting, The Nation in 2017 embraced encryption with a confidential tips page; reimagined ‘Cities Rising,’ a reporting series focused on pockets of urban resistance nationwide; launched “Take Action Now” (@NationAction), a weekly online email initiative that curates opportunities for activism on a sliding scale of time commitment and investment; and introduced OppArt, a new series of artistic dispatches from the frontlines of the resistance.

Advance PDFs of the full issue available upon request and select contributors available for interview. For booking requests or further information, please see contact information above.

Founded by abolitionists in 1865, The Nation has chronicled the breadth and depth of American political and cultural life from the debut of the telegraph to the rise of Twitter, serving as a critical, independent voice in American journalism and a platform for investigative reporting and spirited debate on issues of import to the progressive community.