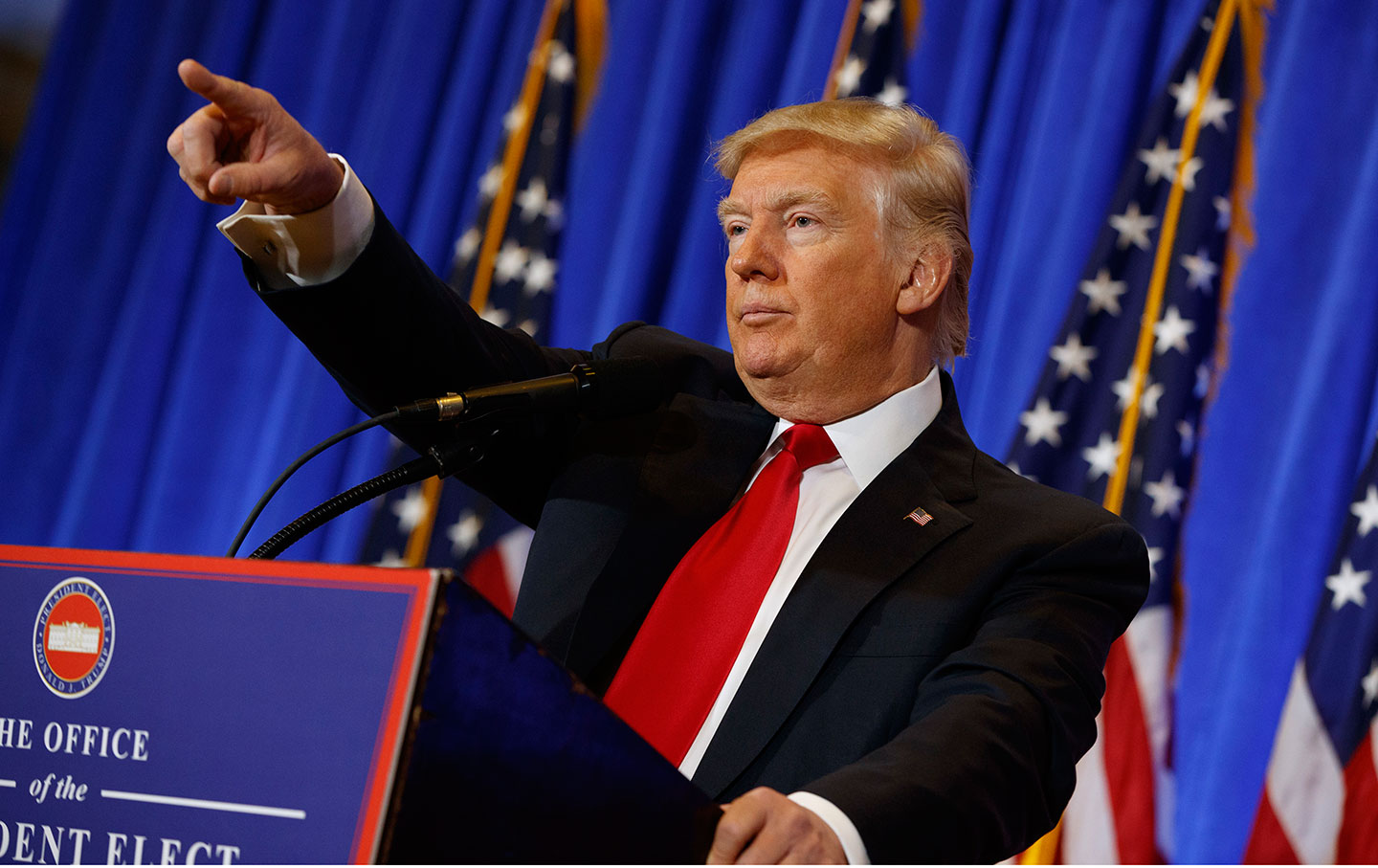 Trump calls on a reporter during a news conference. (AP Photo / Evan Vucci)

To merely make it through the day with one’s sanity intact is no small task during Donald Trump’s presidency. There are so many moving targets, and they proliferate so quickly, that it’s all but impossible to maintain any kind of equilibrium between outrages.1

The phenomenon I find most difficult to stomach is Trump’s genius for upside-down attacks on the media. CNN spent the last two years sucking up to him, giving him billions of dollars’ worth of free airtime and hiring “analysts” whom Trump was paying to lie for him—and he nonetheless accuses the network of spreading “fake news” on those rare occasions when it actually reports real news. To Trump, it’s the real news that is “fake news,” and vice versa. Every day is Upside-Down Day.2

The Times’s DC bureau is a particular problem: Its reporters and editors see themselves as part of the ruling establishment.

Mainstream-media institutions have no idea how to deal with this situation. They know how to treat a president “respectfully,” saying things like he “misspoke” or, in extreme cases, “asserted, while failing to provide evidence,” when presidents lie. But they don’t know how to cover a pathological liar who has convinced himself of the truth of those lies and who is able to get millions of gullible Americans to believe them too. Trump may be Frankenstein’s creation, but the media long ago lost control of their monster.3

Among the institutions trying to find their footing in our newly dystopian democracy, none is more influential than The New York Times. And none does a better job, or even comes close. The Times was among the first newspapers to call the president’s lies by their proper name, and much of what we know about Trump’s various machinations is due to its energetic reporting. But significant problems remain. They will not be easily fixed, since they’re tied to the paper’s DNA. The Washington bureau is a particular problem: Its reporters and editors see themselves as part of the country’s ruling establishment, along with politicians, lobbyists, and various hangers-on. They can’t shake the old habits that continually allow the Times’s pages to be manipulated by the liars and charlatans who now run our government.4

Last month, the paper’s public editor, Liz Spayd, published a thumb-sucker about the proper use of anonymous sources. In it, she quoted “Peter Baker, an accomplished veteran of White House reporting,” acknowledging the Washington bureau’s overuse of them. That same day, however, the Times ran a story co-authored by Baker and Maggie Haberman in which an anonymous White House source was invited to defend how the replacement of former national-security adviser Michael Flynn is being handled. This is simply wrong. Whistle-blowing, on occasion, requires anonymity. Flacks should be required to use their names.5

The establishment media have helped normalize Trump and his assaults on our free press and our democratic norms.

On the same day, the Times featured an even more egregious example of the kind of reporting that we can no longer tolerate. This story, by Sabrina Tavernise, a reporter whose work I had previously admired, professed to ask the question “Are Liberals Helping Trump?” Its thesis appeared to be that by being such meanies—proponents of “moral Bolshevism,” as Tavernise puts it—to Trump supporters, liberals were hurting their own efforts to convince independents and moderate conservatives to oppose the president.6

Its evidence consisted entirely of the following: a self-described South Carolina “conservative” who always votes Republican but is somehow offered as “a natural ally for liberals” (he complains that a woman he wanted to date insisted that he not tell people he’s a Trump supporter); a Silicon Valley techie who thinks that being a Trump voter is like being gay in the 1950s; a Syracuse University administrative assistant who thinks that Democrats are “scarier to me than these Islamic terrorists” and believes that Trump was merely “offering some of the same ideas” on immigration as Bill Clinton; and a woman who feels that Meryl Streep “robbed” her “of that wonderful feeling when I go to the movies to be entertained.”7

Leave aside the fact that liberals long ago learned to appreciate John Wayne, Barbara Stanwyck, and Clint Eastwood, among other performers with right-wing politics. And certainly don’t bother to wonder if the Times felt it necessary to ask whether nasty Tea Party demonstrators were alienating liberal voters. Just ask which of these ridiculous anecdotes actually proves the reporter’s point.8

This article, possibly the silliest to appear in the Times since Trump’s election, is not merely unconvincing. It is also demonstrably false. According to an NBC/Wall Street Journal poll undertaken as the piece was being published, Trump’s approval rating is already underwater:  44 percent of respondents approve of his job performance, while 48 percent disapprove. That minus-four-point spread at this point in his presidency is nearly 40 points worse than that of America’s previous three presidents at the same moment in theirs, and nearly 50 points below that of George H.W. Bush. Among independents, Trump is at a minus-10. If liberal “moral Bolshevists” are “helping” Trump, they’re doing a lousy job.9

The only explanation I can muster for this embarrassment is the Times’s unyielding commitment to false-equivalency narratives, the product of decades of conservative efforts to work the refs. The thinking seems to boil down to this: “We’re running an article about Trump supporters’ violence against immigrants, people of color, Muslims, and Jews, so shouldn’t we also say something mean about liberals too? We wouldn’t want anyone to accuse us of liberal bias.” This has long been the modus operandi at virtually every establishment-media institution, and its cost has been normalizing Trump and his assaults on our free press and democratic norms. If, as Times executive editor Dean Baquet recently explained, the job of his newspaper is “to critique the president” and to hold this “dangerous” leader “accountable,” then this dishonorable practice needs to go.10