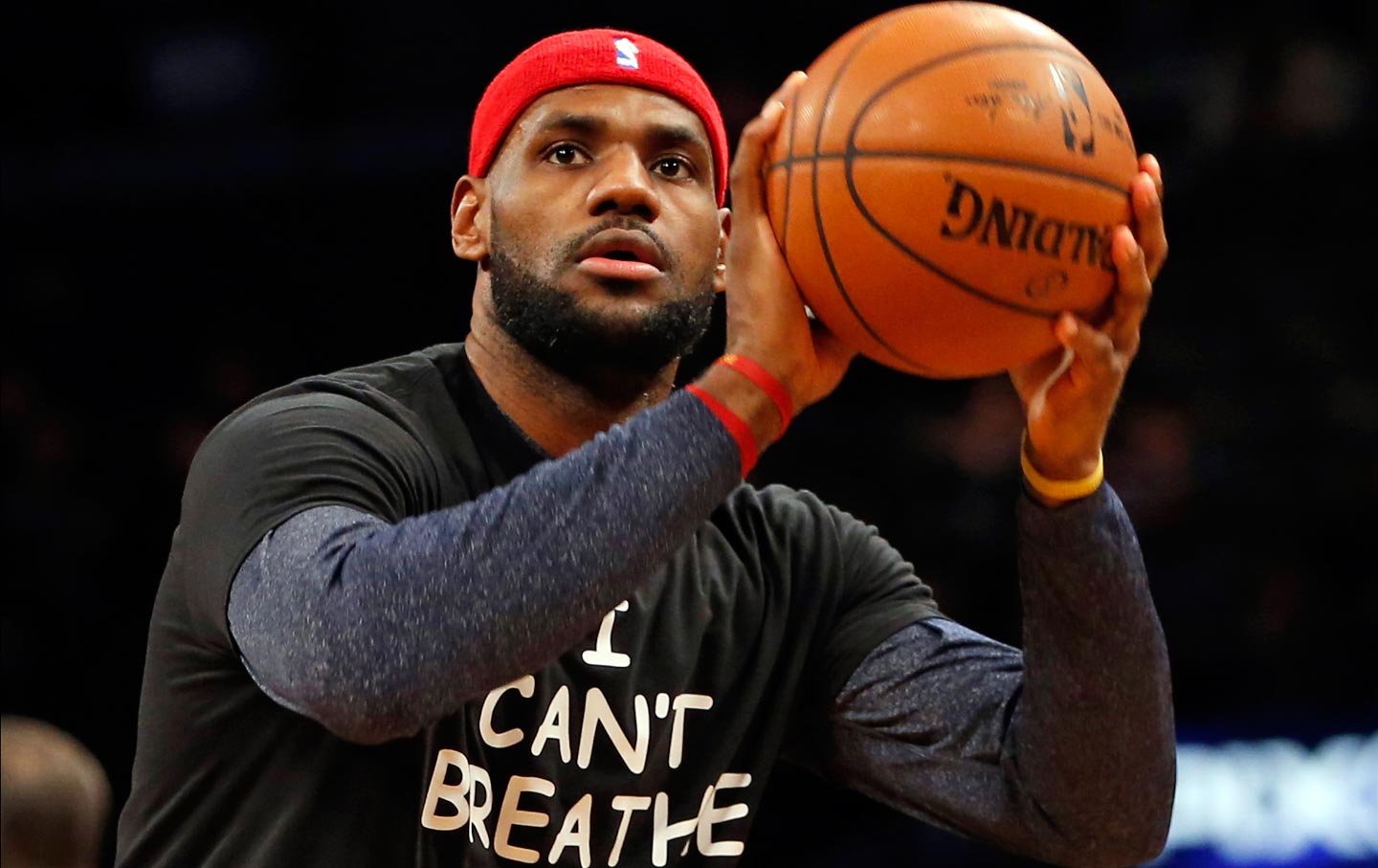 LeBron James warms up wearing an "I Can't Breathe" shirt in protest of the police killing of Eric Garner. (AP Photo / Kathy Willens)

On Wednesday I appeared on ESPN’s flagship program Outside the Lines, along with current and former pro jocks Jason Richardson, Marcus Spears, and Benjamin Watson. The topic was the role of athletes in the Black Lives Matter movement, and how they can exercise their fame and platform for the greater good.

Outside the Lines is really a singular show. It’s the journalistic jewel of ESPN, and I’m honored every time I’m asked to be a guest. That said, as I was sitting my chair, giving my two cents, there was something about the way the issue was framed that felt odd to me. I couldn’t articulate why until after the red light flicked off—always a terrible feeling—so I’ll make it plain now. To be clear, this isn’t just about Outside the Lines, but the way this issue of athletic activism and the Black Lives Matter movement has been framed in mainstream media in the wake of the killings of Alton Sterling, Philando Castile, and the five police officers of Dallas. I had been seeing it for several days across all of cable television without really seeing it. Here is the way the issue is presented: First there is an intro about the tradition of athletes in social movements, usually featuring Muhammad Ali, Kareem Abdul-Jabbar, and Jim Brown. Then they ask the question: What role can athletes play to be that bridge, that “force for good” between the black community and police?

This very formulation puts us on the wrong path before the conversation about what athletes can do even begins. It warps the proud history of athletic activism and projects a false solution to the problems in front of us. Muhammad Ali did not try to “build a bridge” between the pro-war establishment and anti-war activists. Jim Brown and Kareem did not try to bring together racists and antiracists to agree upon their mutual antipathy. They took a side. They took a side in order to win a political fight. Today, we see politicians across the landscape talking about building trust and “race relations,” as if all we need is for police and their victims to engage in some trust falls and all will be great. This is a bankrupt position that does nothing to address the fundamental problem: that police continue to be above the law, utterly unable to be prosecuted, and that 99 percent of them would rather play a certain NWA song in their cruisers than speak out against their colleagues. This is a broken system that needs to be dismantled, and taking the side of building bridges and “peace” is taking a position in defense of the status quo: a status quo that only ensures a future of more deaths, more hashtags, and more pain.

Many athletes are currently reckoning with what it means to “be political” and are using their hyper-exalted platform for the first time in their lives. This was seen in the incredibly moving opening to the ESPYs last night. Carmelo Anthony, Chris Paul, Dwyane Wade, and LeBron James spoke powerfully about police violence, said the names of Philando, Alton, Laquan and Trayvon, and called upon athletes to walk in the path of Muhammad Ali and “educate ourselves.” This is a strikingly positive development. Their goal, however, should not be to become yet another in the already vast legion of feckless actors. Instead, it should be to support those in the streets risking their safety to stand against hyper-militarized police forces who in too many cities show up to these demonstrations dressed for war. That is what a young Muhammad Ali would do. That is what Wilma Rudolph would do. That is what 1968 Olympian John Carlos did when he spoke to Occupy Wall Street in 2011. I was there, and I will never forget what Dr. Carlos said: “The point is not to be a star athlete. The point is to stand up wherever you are. I just happened to be one. If I hadn’t made the Olympics, I just would’ve raised my fist in Harlem instead of Mexico City.” Athletes have a critical role in this struggle: They can raise awareness about people’s grievances, attempt to speak to white fans, and legitimize the very question of struggle. But to do that means taking a side, not building a bridge to nowhere. As Howard Zinn said, “You can’t be neutral on a moving train.” Or as Boots Riley put it, “You can’t change shit by riding the fence.”