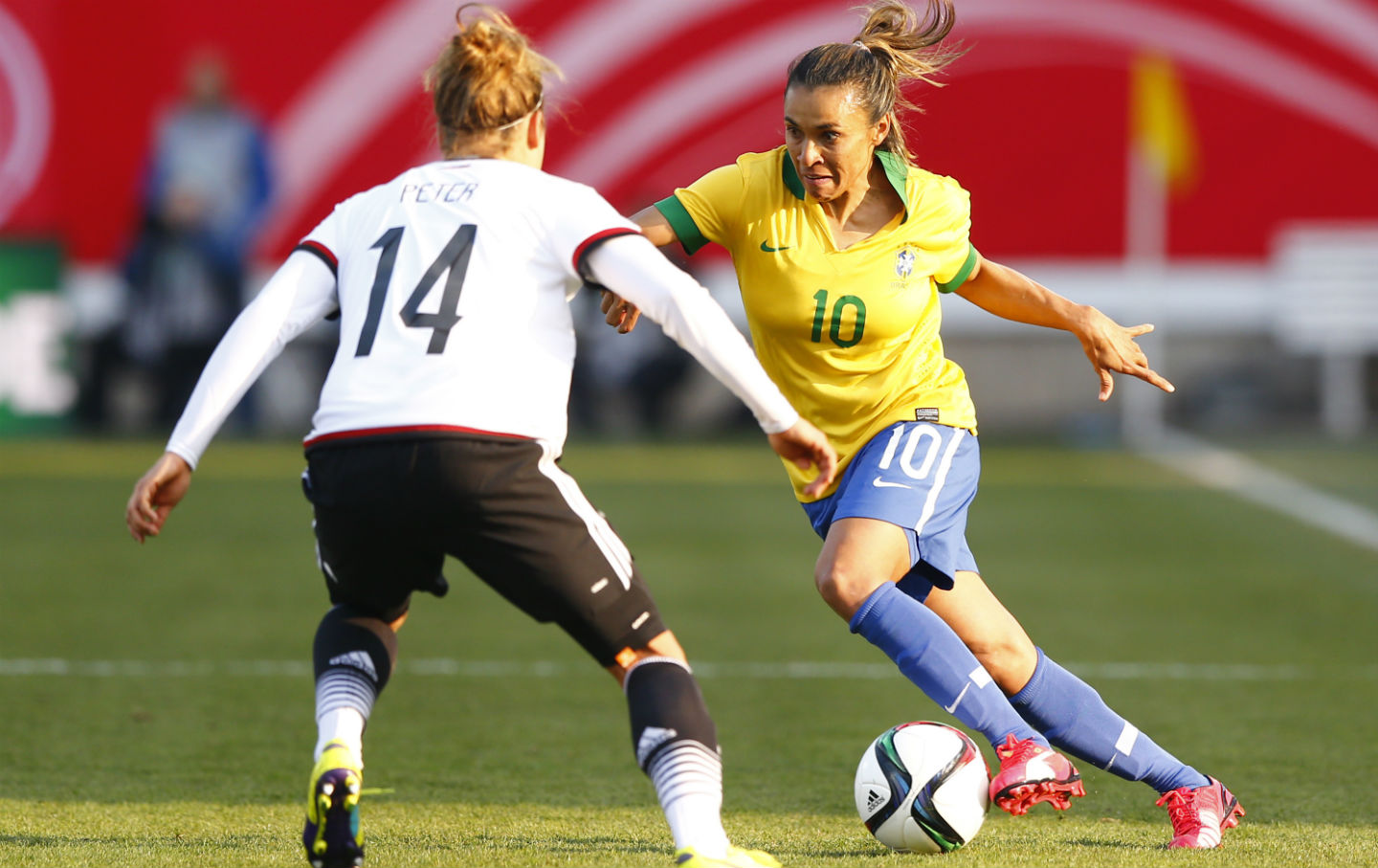 My son goes to a sprawling public school that provides the majority of players for our local soccer rec league. He plays on a team of boys and girls where, as is often the case with 6–8 year olds, the girls frequently dominate on the field of play. In addition, his awesome classroom teacher played soccer at the most legendary women’s collegiate program in the United States. And yet, despite all of that, when recess happens, it’s just the boys playing soccer, while the girls watch. Despite all of that, my son came home to say that one little boy at his school told him and his friends that they “play like girls.” (I’m proud that my son knew that this was an utterly fucked-up thing to say.)

I write this preamble because this is a column about the sexism plaguing Brazilian soccer, but I want to be clear that this is not a South American issue, or an “over there” issue: It’s a global issue. Women’s soccer is not only the story of a sport. It’s the story of a fight for access and opportunity and respect, often against the very people who are supposed to be developing the game. Perhaps nowhere is that reality more evocative than in Brazil. As we know, Brazil still loves its soccer with a passion few countries can match, despite the foul aftertaste of the 2014 World Cup. The women’s team is well-positioned to win its first World Cup (taking place right now in Canada) and its best player, the transcendent Marta, just scored her 15th World Cup goal, making her the most prolific scorer in Women’s World Cup history. Now, like her one-named compatriot Pelé, she is without rival in international competition. And yet her goal did not even merit a mention in the main Brazilian newspaper, O Globo. Meanwhile a friendly match between the men’s national team and Honduras was on the front page. As Stephanie Nolen reported in Toronto’s Globe and Mail, “Some Women’s World Cup games are being broadcast on Brazilian cable channels—but no one appears to be watching.”

Nolen was able to secure comment on this state of affairs from the head of women’s soccer for the Confederation of Brazilian Football, Marco Aurelio Cunha, and his analysis was infuriating in its predictability. Cunha said that he was hopeful for the future of the sport in Brazil because “Now the women are getting more beautiful, putting on make-up. They go in the field in an elegant manner. Women’s football used to copy men’s football. Even the jersey model, it was more masculine. We used to dress the girls as boys. So the team lacked a spirit of elegance, femininity. Now the shorts are a bit shorter, the hairstyles are more done up. It’s not a woman dressed as a man.”

Cunha’s screeching sexism and subtle-as-a-blowtorch homophobia is a nasty echo of Sepp Blatter’s infamous comments from a decade ago that the women’s game would be more successful if they played “in more feminine clothes like they do in volleyball. They could, for example, have tighter shorts.” Even responding to these comments feels nauseating, but to be clear: This is not only morally wretched, it is a recipe for warping, if not destroying, the future of the sport. As proven in field studies by the Tucker Center for Women’s Sports, sexualizing women athletes is a road to neither attention nor respect. In fact, it is the opposite. As Mary Jo Kane of the University of Minnesota’s Tucker Center said to me, “For a female athlete, stripping down might sell magazines, but it won’t sell your sport.”

Women’s soccer will only achieve greater growth when we have a FIFA not run by sexist men. It will grow by pressuring the media to acknowledge the greatness of players like Marta. It won’t grow by saying her invisibility is understandable if she doesn’t dress in a bikini. Marta, who is still just 29, has been named FIFA’s player of the year five times and for 11 years has finished in the top three. This is without precedent in any sport. She is the most laureled soccer player on earth and is in position to lead her country to their first Women’s World Cup. Marta achieved this despite a childhood where she endured beatings for wanting to play. It’s a story for the ages. But her odyssey has been met with a call to turn the game she honors into a lingerie league. She is not being told to “shut up and play” but “shut up and pose.”

Women’s soccer will only achieve greater growth when we have a FIFA not run by sexist men.

That moral midgets like Sepp Blatter and Marco Cunha have overseen Marta’s development says wondrous things about her resiliency and love of the beautiful game. It also says horrific things about the state of leadership in the sport. Their call to sexualize women’s soccer is a call to debase the game, repel the best young female athletes from playing, and justify the media’s ignoring women’s soccer on the basis of it’s not being “serious.” It justifies a status quo in Brazil that I saw: where young boys played in the favelas and on the beaches in bare feet and the girls stood on the side watching. They watched with that yearning universal of children to run, jump, and play, but a force field of sexism kept them at bay. It’s not unlike the recess force field at my son’s school. It’s a force field we should be tearing apart with our bare hands. If FIFA’s sausage-fest of leaders stands in the way, let them be torn to pieces as well.