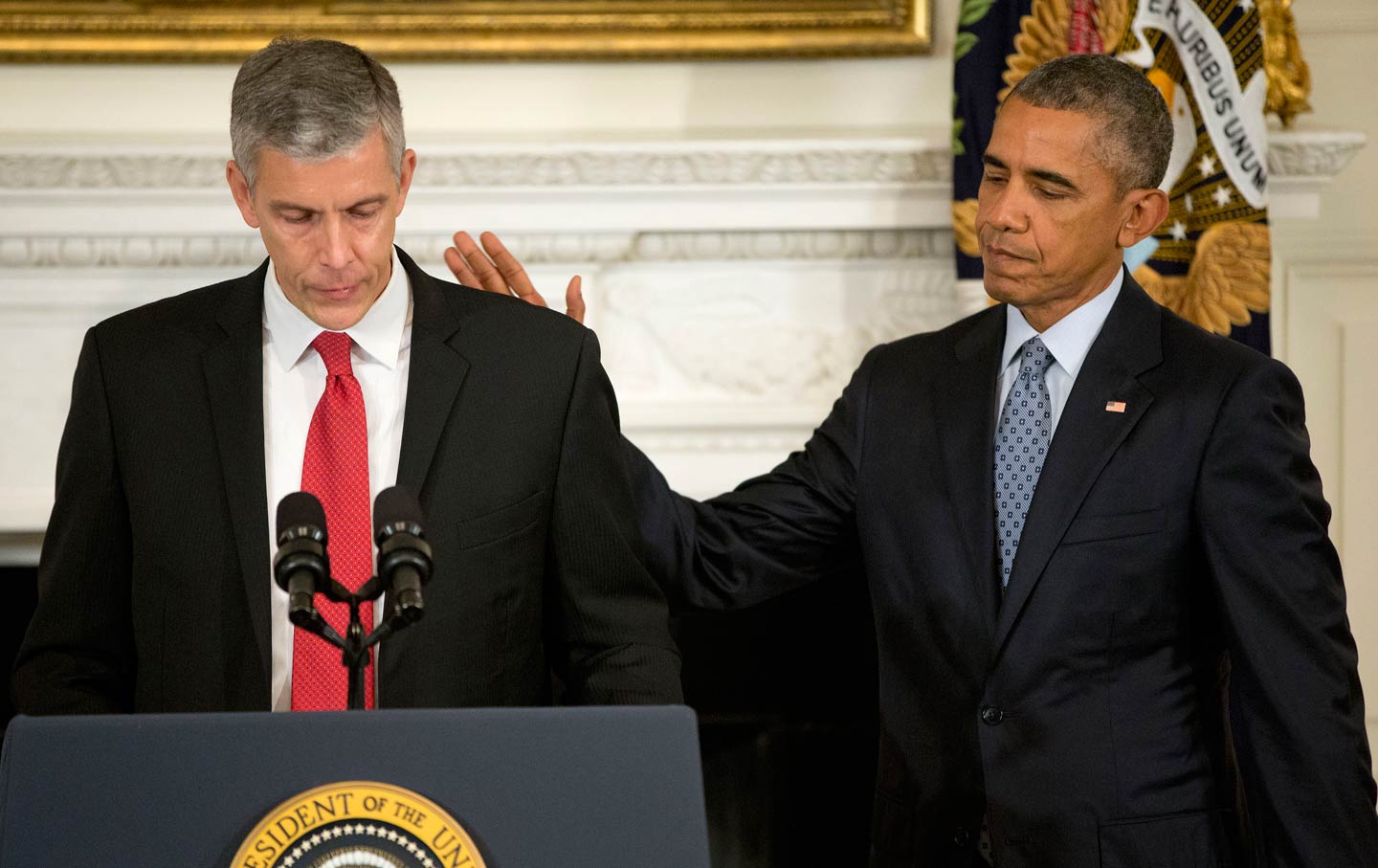 To understand the legacy of outgoing education secretary Arne Duncan, look to the Crescent City. Hurricane Katrina, Duncan said once, was “the best thing that happened to the education system in New Orleans.” What the disaster did was enable state legislators and out-of-state reformers to transform the system on an unparalleled scale. Nearly all of the schools were converted to charters, which receive public funds but have less oversight than traditional public schools. Some 7,500 unionized teachers and other employees were fired, many of them people of color. The city’s teaching core went from 71 percent black in 2004 to less than 50 percent last year.

To avoid closure, new schools had to focus on raising standardized test results. Scores did go up; more than 60 percent of elementary and middle-schoolers passed state tests last year, up from 37 percent in 2005, and graduation rates have risen. But it’s not clear the gains are due to the kinds of reforms that people like Duncan champion, such as tying teacher accountability to test results. The flood of philanthropic and federal money that went into the charter system after the hurricane was unprecedented; such an investment might have improved the city’s traditional (and broke) public schools, too, if they hadn’t been shuttered.

“He’s a nice guy who cares about kids, but he showed that in all the wrong ways in policy and practice."

Duncan, who announced his resignation last week, took over at the Department of Education several years after the New Orleans overhaul began. But he’s pointed to the city as a sort of blueprint for remaking public education across the country. It’s the place where his vision for school reform was most fully realized. Whether the overhaul was a miracle or misguided is a question about Duncan’s legacy more broadly.

Once called a “budding hero in the education business,” Duncan proved himself a champion for those who saw a money-making opportunity in America’s beleaguered public school system—the charter school and testing industries, for instance. Pushing a market-based vision of reform, Duncan oversaw mass school closures and a deepening obsession with standardized tests, which he said was necessary to prevent teachers from “lying” to children about their preparedness. He opened the door of the Education Department to “the Billionaire Boys’ Club,” people from philanthropic groups like the Gates Foundation and the NewSchools Venture Fund. Teachers, on the other hand, felt shut out, and alienated by a narrative of educational inequality that framed it less as a legacy of racism and poverty than a reflection of their own shortcomings. The corps of professional educators shrunk and grew less diverse.

After Barack Obama was elected, many hoped he would apply his campaign-trail promise of change to the punitive testing regime ushered in by George W. Bush and No Child Left Behind. But Obama passed over former teacher and education expert Linda Darling-Hammond in favor of Duncan, his basketball buddy, who’d aligned himself with the corporate reform movement as CEO of Chicago Public Schools. As Secretary, Duncan “continued and carried the torch for pushing educational policies that don’t have basis in research, such as value-added measurements, using high-stakes testing to evaluate teachers, or continuing to promote charters schools as a silver bullet to solve inequality,” said Wayne Au, who teaches in the education program at the University of Washington.

"While Duncan spoke often accountability, he applied it selectively."

“He’s a nice guy who cares about kids, but he showed that in all the wrong ways in policy and practice,” said José Luis Vilson, a math teacher and activist in New York, summing up an assessment of Duncan that many progressives have articulated since he announced his resignation. He’ll be replaced by John King Jr., a former New York State education commissioner with a similar philosophy of reform.

Test scores have risen nationally under Duncan’s tenure, but that data is only as strong as your faith in the ability of standardized tests to measure quality of education. It’s hardly surprising that scores have gone up, since schools are now spending considerably more hours and money—$13.1 billion in the 2014-15 school year—drilling students in preparation. But the obsession with data comes at the expense of types of learning, and Duncan’s critics point out that although the scores and graduation rates are rising overall, the gap between children of color and their classmates persists. “Market-based reforms gets pushed as civil-rights agenda issue. Duncan is as guilty of that as Obama, and as Bush,” said Au. “But that usually comes without any real look at whether or not those policies are making advances in both the education and life opportunities for communities of color.”

The gulf between what poor and rich school districts are able to offer their students has not closed under Duncan, either. “The common situation in America is that schools in poor communities spend less per pupil—and often many thousands of dollars less per pupil—than schools in nearby affluent communities, meaning poor schools can’t compete for the best teaching and principal talent in a local labor market and can’t implement the high-end technology and rigorous academic and enrichment programs needed to enhance student performance,” reads a 2013 report from a congressional commission on equity in education.

Though Duncan leveraged federal funding to press states into adopting certain policies around charter expansion, testing, and teacher evaluations, he was far more reluctant to create incentives for state to address these resource inequities or resegregation. In order to qualify for a grant from the $4.3 billion Race to the Top program, for instance, states had to facilitate the creation of new charter schools, and could not explicitly rule out the use of student test scores in teacher evaluations. But the money was not contingent on policies to boost investment in schools serving high-poverty communities. Such an approach, the commission’s report concluded, “produced a great amount of data, and a greatly increased number of regulations, but an insufficient amount of overall progress.”

And while Duncan spoke often of accountability, he applied it selectively—to teachers and, to his credit, the for-profit college industry, but not to charter schools.  The same week Duncan tendered his resignation his department announced new grants for charters totaling $157 million. The biggest winner was Ohio, where charters have misspent at least $27 million since 2001 and have “produc[ed] academic results that rival the worst in the nation,” according to the Akron Beacon Journal. A review conducted this year by the Center for Media and Democracy concluded, “The federal government has spent a staggering sum, $3.3 billion, of taxpayer money creating and expanding the charter school industry over the past two decades, but it has done so without requiring the most basic transparency in who ultimately receives the funds and what those tax dollars are being used for, especially in contrast to the public information about truly public schools.”

Duncan did push for greater investments in early childhood education, and he helped secure $40 billion for Pell Grants, which support low-income college students. He’s also been credited with “cracking down” on for-profit universities like Corinthian Colleges, and he’s promised debt relief for some student borrowers. But advocates for student debtors say Duncan’s department has made the process prohibitively complex. As of September, none of the 4,000 people who say they were defrauded by Corinthian have received loan forgiveness.

One of Duncan’s most significant contributions was unintentional: spurring a grassroots backlash to standardized testing and Common Core. Hundreds of thousands of students have opted out of tests in the past several years. Responding to public pressure, federal lawmakers are considering replacement legislation for No Child Left Behind that would scale back the Education Department’s power and shift the battles over tests and accountability to the states. The backlash is bipartisan, though conservative critiques tend to be rooted in an antigovernment stance instead of a defense of public schools. Since Obama and Duncan’s successor aren’t likely to redirect their guiding philosophy, public education advocates are looking ahead to 2016. The challenge now, said Vilson, is pushing the backlash beyond its current “anti” focus and towards a real justice agenda. “We need to create a much stronger agenda for what the response should be to these corporate reforms,” he said. “If we continue to perpetuate inequity in places where there’s lots of poverty and people of color, what will that backlash actually have done?”