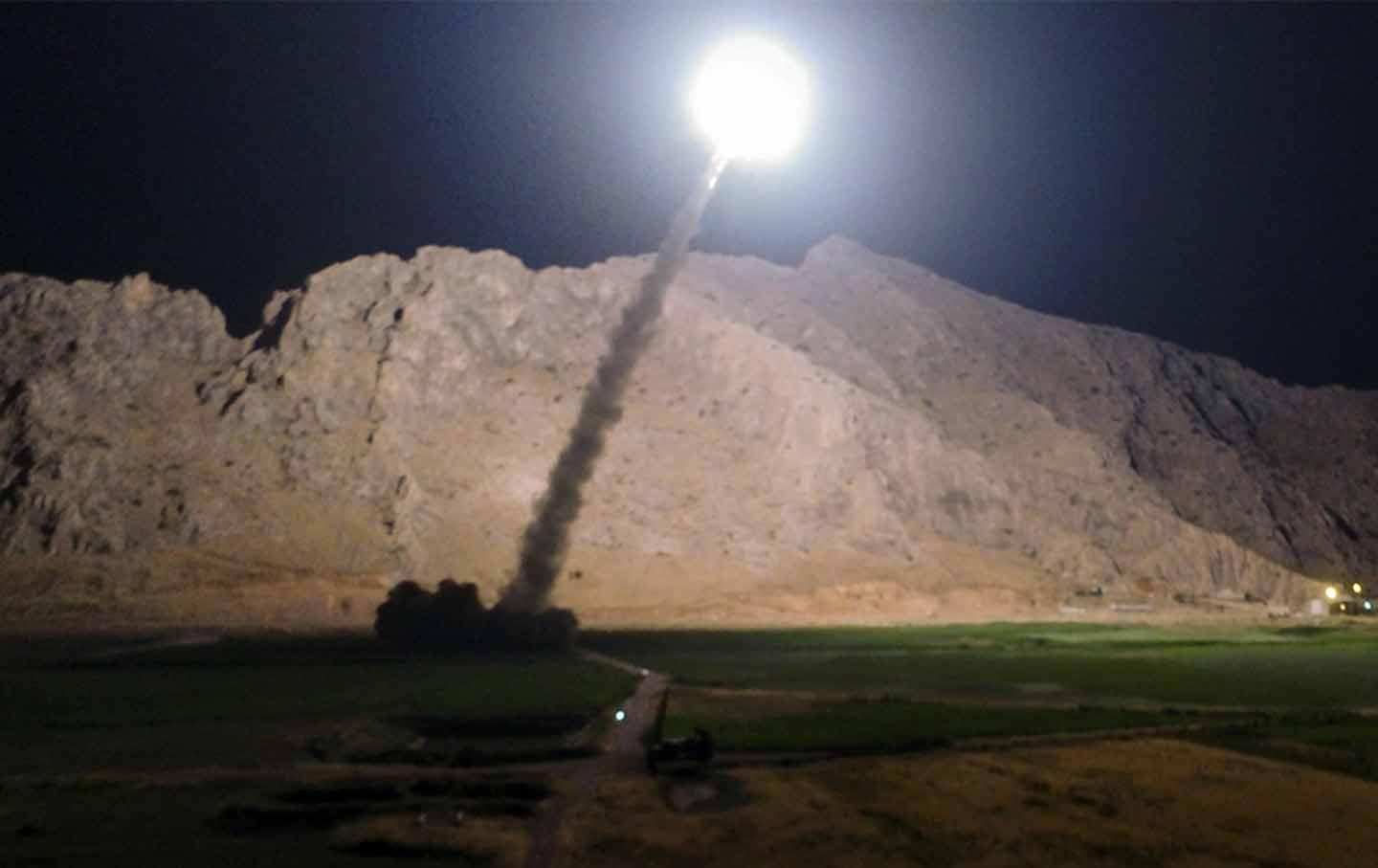 In a photo released on June 19, a missile is fired from western Iran targeting the Islamic State in Syria. (IRIB News Agency, Morteza Fakhrinejad via AP)

Tensions between the United States and Iran have heated up in recent weeks, as the two tangle over the shape of postwar Syria and Iraq. The United States is attempting to block Iran from overland access to Syria, and the ayatollahs are pushing back with sophisticated drones. The United States has shot down two large, armed, unmanned aerial vehicles (UAVs) in the past two weeks, which were targeting US troops and their proxies. A week ago, Secretary of State Rex Tillerson explicitly called in an open session of Congress for regime change in Iran. At the same time, Washington depends on pro-Iranian militias in Iraq in its final push against the so-called Islamic State (aka ISIL, ISIS, Daesh) group there. The apparent US ambition of controlling the 372-mile Syrian-Iraqi border is implausible, and the attempt will prolong the bloody Syrian civil war.

Iran, for its part, continues to attempt to demonstrate that it is a player in the Middle East. After an attack by ISIL in Tehran, the Iranian Revolutionary Guard Corps (IRGC) on Sunday fired seven Zolfiqar missiles, with a range of 435 miles, at ISIL positions in Deir al-Zour Province, Syria. While only two appear to have stuck their targets, it is hard not to conclude that Iran demonstrated a new level of military capability by this action. Despite Israeli attempts to play it down, that Iran was able to hit ISIL with rockets in a country with which it does not share a border underlines its growing military sophistication.

Iranian Foreign Minister Mohammad Javad Zarif attempted to downplay the aggressive rhetoric of the IRGC, terming it “a justified act of self-defense.” As analyst Maysam Behravesh noted, the strike was also intended to send a message to Saudi Arabia, Israel, and the United States, at a time of open Trump administration collusion with its two major allies against Iran.

Washington has its own reasons for curtailing Iranian influence, but it’s also pleasing its Israeli and Saudi partners.

In the meantime, Iran is asserting itself in eastern Syria near the Iraqi border, where the United States and its Syrian Kurdish and Arab allies appear to be attempting to build a zone of control that would block overland Iranian shipments of men and arms to Syria and Lebanon. The United States has its own reasons for wanting to curtail Iranian influence, but it is also acting in a way that will please its Israeli and Saudi partners in the region.

Trump and His Generals Are Playing a Dangerous Game in Syria

Trump Is Playing Into the Hands of the Saudi Regime

Trump’s Policy Is Clear: Civilian Casualties Don’t Matter in the War on Terror

At the moment, Syria’s eastern border is largely controlled by ISIL, but the Pentagon appears to hope that as their Kurdish and Free Syrian Army allies roll up the terrorist organization, these friendlies can be inserted into this borderland region to prevent pro-Iranian Shiite militias, whether Iraqi, Syrian, or Lebanese, from asserting themselves there. There are some 1,000 US Special Forces personnel embedded with the Syrian Democratic Forces (SDF), the core of which is leftist Kurdish militiamen of the YPG, or People’s Protection Units. Kurds predominate in the northeast of Syria, but Raqqa and Deir al-Zour to the south are Sunni Arab.

Two weeks ago, Iran used an armed Shahed-139 drone to send a shot across the bow of US troops at the Tanf garrison in the Syrian southeast. On Monday, another large drone with “dirty wings” (i.e., carrying rockets) was approaching the coalition training camp at Tanf near the Syrian-Iraqi-Jordanian triangle, when a US fighter jet blew it out of the sky (a major highway in Iraq runs west from Baghdad through al-Rutba toward Jordan and also forks to go into southern Syria and thence Damascus and Beirut).

On Wednesday, the Syrian Arab Army and Shiite militia allies, supported by Russian close air support, expelled the Free Syrian Army from Bir Qassab southeast of Damascus in an attempt to move into the Badia desert and reach the Iraqi border. These operations appear aimed in part at cutting the US garrison at Tanf in the southeast off from areas to its north. In mid-May, the United States struck at a convoy of Shiite militiamen headed toward Tanf, killing six.

Iran’s ally, the Syrian government of President Bashar al-Assad in Damascus, is also unhappy about the prospect of a permanent US-Kurdish zone of control in eastern Syria, even if the initial stage of its establishment involves the defeat of ISIL. This US-Syria conflict over the east is leading in dangerous directions. On Sunday, some 280 miles north of Tanf, a Syrian fighter jet attempted to strike at SDF forces at Tabqa just west of the ISIL capital of Raqqa and was shot down by the US Air Force, the first time in nine years the American military had downed a foreign military aircraft. Russia announced that it would begin tracking US aircraft flying west of the Euphrates. If that tracking means locking on radar from anti-aircraft batteries, it is a dangerous escalation that no US pilot would take lightly.

The prospect of the United States controlling the Syria-Iraq border through its SDF allies is, in the medium to long term, remote. The biggest and best fighting force in the SDF is the Kurds of the YPG, who are unacceptable to the conservative Sunni Arabs of southern Raqqa and Deir al-Zour provinces. The United States has had zero success raising a substantial, efficient fighting force among Sunni Arab fundamentalists of the sort it is trying to train at Tanf. Pro-Iran Shiite militias, moreover, are taking up positions on the Iraqi side of the border as ISIL nears defeat in that country. Even when the US militarily occupied Iraq for eight and a half years, with as many as 160,000 troops on the ground, it was never able to control the border with Syria. This current Trump administration policy is yet another of many in today’s Washington that is overly ambitious and doomed to failure. The coming train wreck, however, could leave a lot of dead bodies in its wake.