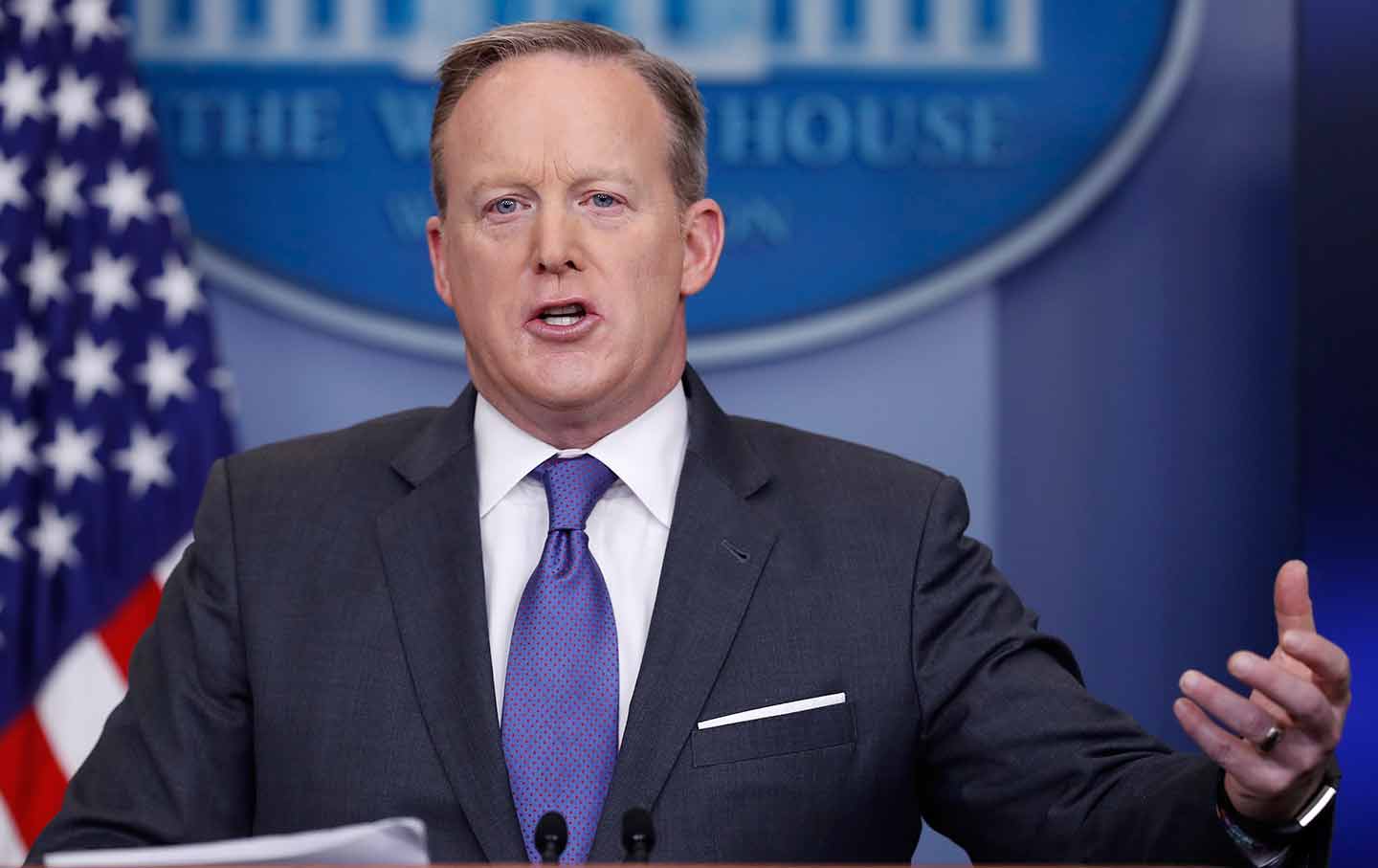 On January 30, White House Press Secretary Sean Spicer delivered a thinly veiled threat to the State Department officials who drafted a dissent memo against President Donald Trump’s executive order halting the refugee program and barring citizens from seven Muslim-majority countries from entering the United States. “Those career bureaucrats have a problem with it? They should either get with the program or they can go,” Spicer said, just days after the White House purged several senior officials who held administrative positions in the State Department. With these words, the Trump regime escalated its attack on the federal agencies that dare to disagree with its fiats.1

The five-page memo, which was signed by some 1,000 Foreign Service officers and submitted to Acting Secretary of State Tom Shannon yesterday, is a classic expression of the liberal internationalism that has characterized the State Department since the end of World War II. It blends a pragmatic defense of the US national interest with a principled argument on behalf of American values. “A policy which closes our doors to over 200 million legitimate travelers in the hopes of preventing a small number of travelers who intend to harm Americans from using the visa system to enter the United States will not achieve its aim of making our country safer,” the memo reads. “Moreover, such a policy runs counter to core American values of nondiscrimination, fair play, and extending a warm welcome to foreign visitors and immigrants.”2

In many respects, the memo is extraordinary. With approximately 1,000 signatures, it is by far the biggest dissent message in the history of the State Department. The second-biggest dissent message in the department, written in response to Obama’s Syria policy, had 51 signatories. It is also part of a growing trend in which State Department dissenters have leaked their internal memos to the press. The first State Department officer to do so was Brady Kiesling, who resigned from the department in protest of the 2003 invasion of Iraq.3

At the same time, the massive protest against Trump’s executive order belongs to a long tradition of dissent in the diplomatic establishment. I wrote about the culture of dissent in the State Department in my book, The Dissent Paper: The Voices of Diplomats in the Cold War and Beyond. So embedded is the culture of dissent among career diplomats that the State Department has an official Dissent Channel. Created in 1971 during the Vietnam War, this mechanism allows rank-and-file Foreign Service officers to express their disagreements with the reigning policy directly to senior policymakers. The secretary of state is obliged to read and respond to all Dissent Channel messages within 90 days. To this day, the Dissent Channel has no parallel in other agencies of the federal government. It is a unique experiment in the management of bureaucratic dissent.4

The history of the Dissent Channel is anything but a story of friendly relations between rank-and-file diplomats and high-level policy-makers. Rather it is a testament to the perennial power struggles that take place between bureaucrats and elected officials. During the Second World War, the diplomatic service began to transform from a backwater of conservative, striped-pants aristocrats to more of a middle-class meritocracy that tended to attract liberals. That is partly why it was a central object of McCarthyist attacks in the 1950s. The Dissent Channel emerged in response to the heightened influence of the antiwar movement in the State Department beginning in the late 1960s. In April 1970, 20 Foreign Service officers wrote a letter to Secretary of State William Rogers condemning the invasion of Cambodia. Nixon privately seethed about the unruly bureaucrats at Foggy Bottom. “We have no discipline in the bureaucracy,” he complained to Kissinger. “We never fire anybody. We always promote the sons of bitches that kick us in the ass.… When a bureaucrat deliberately thumbs his nose, we’re going to get him.… The little boys over in State particularly, that are against us, we will do it.”5

Although Nixon privately fantasized about firing dissenting diplomats, his administration ended up adopting a different approach. Rather than condemn the expression of dissent, it took the lead in implementing the Dissent Channel and celebrating it publicly. As plugging leaks increasingly became a priority, the channel promised to contain the potential flood. “The right of dissent is very important. And no one’s been pushing for it harder than I,” said Undersecretary of State William Macomber, “But we want to keep it in the house.”6

Since its creation, hundreds of memos have been submitted through the Dissent Channel. Few of these have had a direct impact on the policies they have protested. Most State Department officers have accepted this reality. Thomas Boyatt, a Foreign Service officer who delivered a prescient dissent memo on Cyprus in 1974, which was ignored by Kissinger, said that the Dissent Channel “helps to defuse the inevitable tensions policy disagreements generate.” Over the decades, the Dissent Channel has came to serve as a tool for achieving a certain détente between dissenting diplomats and presidents who might otherwise feel threatened by them. It gave State Department officers a regulated space to voice their views. It gave the secretary of state and White House an opportunity to quell and contain dissent.7

Although some users of the Dissent Channel were transferred from their geographic regions of expertise, remarkably few were dismissed. And many were promoted to senior positions in the department. There are even awards given out by the American Foreign Service Association for constructive dissent. Boyatt, a recipient of this award, became ambassador to Upper Volta (now Burkina Faso) and Colombia. When the dissent memo about Syria leaked to the press last June, Secretary of State John Kerry expressed support for career diplomats’ right to disagree with the administration’s policy.8

This working arrangement between dissenting diplomats and the White House has come to an abrupt end. In addition to risking the lives of thousands of refugees, students, scholars, and green-card holders, the Trump administration is threatening to destroy the careers of dozens of individuals who have devoted their lives to advancing US diplomacy around the world. This will no doubt send chills down the spines of the thousands of people who work for the State Department. In effect, Trump is emptying out and silencing the State Department from top to bottom. If the administration continues this crackdown, we may soon find out what a nation without career diplomats looks like. The only silver lining to this petty and dangerous war on bureaucrats in the State Department, as well as on careerists in the Environmental Protection Agency and National Parks Service, is that the public is coming to appreciate the value of bureaucracy—and dissent.9