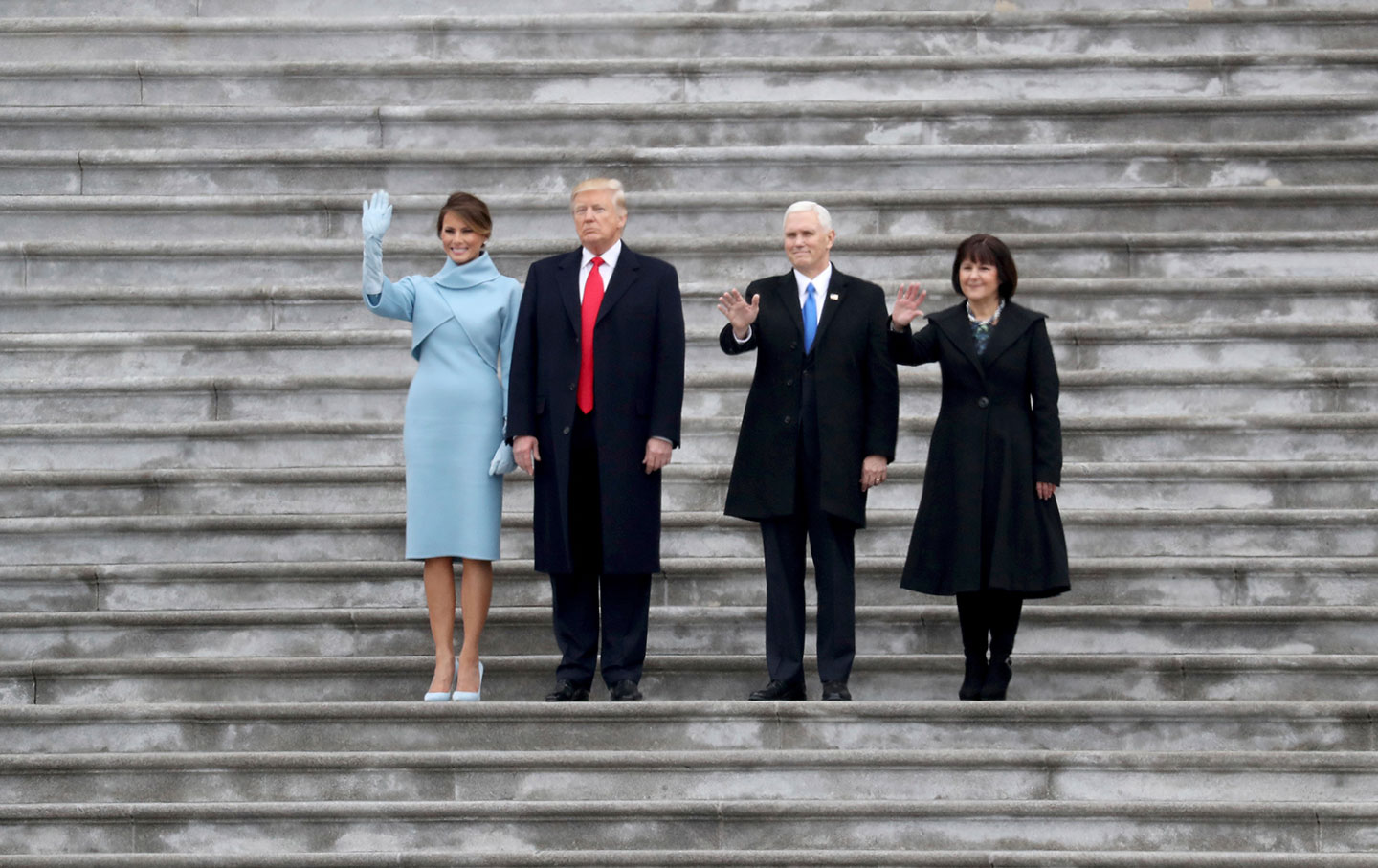 Donald Trump, the real-estate mogul and reality-television superstar, descended the steps of the Capitol around 11 am to take the oath of office as president of the United States. An audacious looting of the country had begun.

In attendance were several corporate titans on the verge of the biggest merger and acquisition of all time—the ExxonMobil CEO who may soon take control of the country’s foreign relations, the fast-food CEO ready to take over the Labor Department, and the handful of powerful Wall Street titans who have been appointed to almost every critical economic post. Not least is Trump himself, who brazenly decided to essentially remain in control of his corporation while simultaneously directing the affairs of the country.

In true Trump style, he painted a picture perfectly at odds with this reality during his inauguration speech. “For too long, a small group in our nation’s Capital has reaped the rewards of government while the people have borne the cost,” Trump declared. “Washington flourished—but the people did not share in its wealth. Politicians prospered—but the jobs left, and the factories closed.” “That all changes—starting right here, and right now,” Trump declared.

One would be tempted to think Trump and his team won’t get away with it. But his inaugural address was a skilled, cynical stirring of the populist sentiment that has already gotten him this far. Much like his speech at the Republican National Convention this summer, Trump painted a bleak picture of the country, like “the crime and gangs and drugs that have stolen too many lives and robbed our country of so much unrealized potential.” Trump promised, “This American carnage stops right here and stops right now.”

He also described how America was being ripped off by the rest of the world: “The wealth of our middle class has been ripped from their homes and then redistributed across the entire world,” Trump said. He declared an end to all of this, promising to put “America First”—a slogan he used often in the campaign, and one with a dark historical lineage.

Trump was vastly overstating the case on jobs and crime, as left-leaning fact-checkers were quick to point out. But fact-checking may not be enough to thwart Trump: He was nevertheless speaking to real phenomenons of deindustrialization and outsourcing that stripped wealth from many parts of the country. He offers no real solutions, but he has effectively capitalized on a lot of real economic pain in order to advance his own vision and his own ends. That was perfectly clear on Friday afternoon.

It was a remarkable and unfamiliar moment—as were the scenes outside the inauguration.

Not long after Trump retired to the Capitol for the traditional post-inaugural luncheon, chaos erupted in downtown Washington. Cable-news networks cut away from the pre-meal blessing to show flash-bangs and tear gas filling K Street, not far from the White House, as anarchist protesters smashed windows and lobbed objects at the police.

In the morning, peaceful civil disobedience was happening at several inauguration checkpoints. On the same street as Ford’s Theater, at least one hundred protesters formed a human chain across the entire inauguration entrance gate, several people deep. They politely informed inauguration attendees that “this entrance is closed,” and breaking out often into chants like “No Trump, No KKK, No Racist USA.”

The blockade was surprisingly successful. Most of the visitors, clad in “Make America Great Again” gear, surveyed the scene and turned back. A few angry ones bull-rushed the line, but were repelled as protesters screamed in their faces. A handful made it across with the help of police, which was always met with a repetitive chant of “shame!”

Xan Joy was a diminutive, older woman who traveled from California to protest. She was among those on the front lines of the human chain, telling Trump inauguration attendees they had to find another way in.