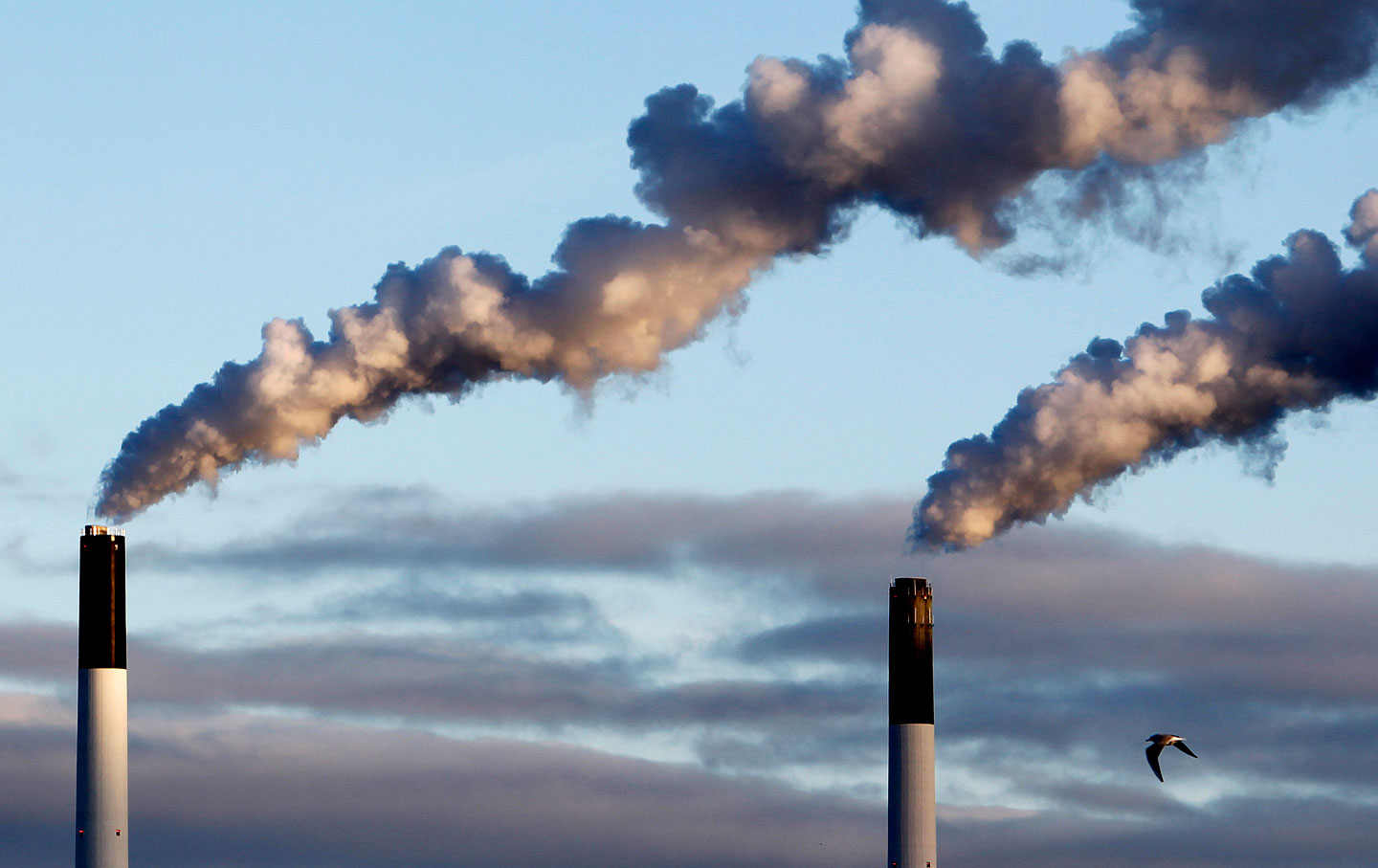 On a Wednesday in early May, Senator Sheldon Whitehouse went to the floor of the Senate to deliver his 98th weekly speech on climate change. As he usually does, Whitehouse spoke to a largely empty chamber, and the media ignored him. Afterwards, few people knew that he’d just laid out what could be a groundbreaking legal strategy to hold fossil-fuel companies accountable not only for the damages of climate change but also for their efforts to mislead the public about climate science.

Whitehouse’s speech (and a subsequent op-ed in The Washington Post) focused on the parallels between the fossil-fuel industry and tobacco companies. They share a “playbook,” he argued, profiting from products that put health and safety at risk while working to disseminate deceptive information to downplay those risks and evade regulation. “The match between the fossil fuel industry and Big Tobacco is pretty good in terms of the business risk presented if the public were to be really aware of the harm. They have a motive to deceive,” Whitehouse said. “If anything, the fossil fuel industry’s climate denial scheme has grown even bigger and more complex than Big Tobacco’s.”

But the government has its own playbook, Whitehouse noted: the Racketeer Influenced and Corrupt Organizations Act. Congress passed RICO in 1970 for the purposes of prosecuting mobsters, but the statute’s contours are broad enough that it’s been used against anti-abortion activists, the police, and, most recently, FIFA officials. In 1999 the government filed a civil suit alleging tobacco companies had violated RICO by executing “a massive 50-year scheme to defraud the public, including consumers of cigarettes.” A federal judge agreed, ruling in 2006 that the corporations had “coordinated significant aspects of their public relations, scientific, legal, and marketing activity in furtherance of the shared objective—to…maximize industry profits by preserving and expanding the market for cigarettes through a scheme to deceive the public.”

Could fossil-fuel companies be liable under RICO? The idea hasn’t yet been tested in court, but lawyers have been considering it at least since 2013, when climate scientist Richard Heede published a stunning paper concluding that just 90 corporations—including ExxonMobile, BP, Chevron, Conoco-Phillips, and Shell—are responsible for nearly two-thirds of all carbon dioxide and methane emissions since the beginning of industrial era. There is mounting evidence that many of these companies have been aware of the link between carbon emissions and climate change for decades, yet employed a variety of tactics to undercut publicly the science they acknowledged in private. The fundamental basis of a RICO case “is that there is a group of people acting together to disseminate false information,” explained Richard Ayres, an environmental lawyer and co-founder of the Natural Resources Defense Council. “In terms of litigation strategies,” Ayres continued, “RICO is as good as anything I’ve seen.”

Just last week the Union of Concerned Scientists released a collection of 85 internal memos and other documents detailing a “coordinated campaign of deception” endorsed by ExxonMobil, Chevron, ConocoPhillips, BP, Shell, Peabody Energy, and other companies. They include forged letters opposing the Waxman-Markey cap and trade bill, supposedly sent by groups like the NAACP, but actually by a coal-industry group; a primer prepared in 1995 for a front group created to discredit climate science that acknowledges the “scientific basis for the Greenhouse Effect and the potential impact of human emissions of greenhouse gases such as CO2 on climate is well established”; and a newly uncovered e-mail from an Exxon employee which demonstrates the company was factoring concerns about carbon emissions and climate change into its decision-making as early as 1981, seven years before NASA scientist James Hansen brought the issue to public attention. According to the e-mail, those concerns led Exxon to walk away from “an immense reserve of natural gas” off the coast of Indonesia because it had an unusually high concentration of carbon.

“The revelation that Exxon knew about the link between climate change and carbon pollution as early as 1981, and yet continued to support the decades-long campaign of denial described in the [Union of Concerned Scientists] report, strengthens the parallel with the tobacco-industry conduct that led to a civil RICO verdict against tobacco,” Senator Whitehouse told The Nation. “Whether DOJ pursues this or not is their call, but if nothing else the UCS report shows these are legitimate questions to ask.”

Some of the trickier aspects of prosecuting fossil fuel companies for racketeering would be beating a free-speech defense, and demonstrating specific acts of fraud and collusion. The climate-denial beast (to use Whitehouse’s phrase) is a more complex animal than the institute that the tobacco industry set up as its primary front group; it’s made up of companies, wealthy individuals like Charles and David Koch, multi-issue think tanks, and academics. Degrees of separation might insulate companies from direct liability for spreading misinformation. Still, there is evidence that fossil-fuel interests coordinated their public-relations campaigns. For instance, in 1998, during negotiations of Kyoto Protocol, Exxon, and other members of industry and conservative groups met in the office of the American Petroleum Institute and came up with a “global climate science communications plan,” designed to make “average citizens ‘understand’ (recognize) uncertainties in climate science” such that “recognition of uncertainties becomes part of the ‘conventional wisdom.’”

A civil suit under RICO could be brought by states or individuals as well as by the DOJ. And it could have an impact even if it weren’t ultimately successful, particularly if the case made it to the discovery phase, in which defendants could be forced to hand over other internal communications detailing what they knew about climate change when, and how they worked together. In the tobacco case, those types of documents helped shift public opinion and built support for regulatory action.

“There are a lot of similarities with what we’re seeing the fossil-fuel industry has done and what the tobacco industry did,” said Sharon Eubanks, a former Justice Department lawyer who led the RICO case against the tobacco companies. “When you’re looking at a large industry, it takes a series of cases over time to have a solid claim that’s going to survive all the motions to dismiss.”

At the end of his speech, Senator Whitehouse reminded his colleagues of their “legislative responsibility to address climate change.” But it’s clear that too many lawmakers have abdicated, thus the pressure to tackle the climate issue through existing regulations like the Clean Air Act, and through the courts. “I’ve been hearing for twelve years or more that legislation is right around the corner that’s going to solve the global-warming problem, and that litigation is too long, difficult, and arduous a path,” said Matthew Pawa, a climate attorney. “Legislation is going nowhere, so litigation could potentially play an important role.” A racketeering suit isn’t the only possible avenue—most climate cases so far have relied on common-law claims of public nuisance—but given the tobacco precedent and a deepening understanding of the energy industry’s awareness of climate science, Whitehouse’s little-noticed speech might one day appear entirely prescient.