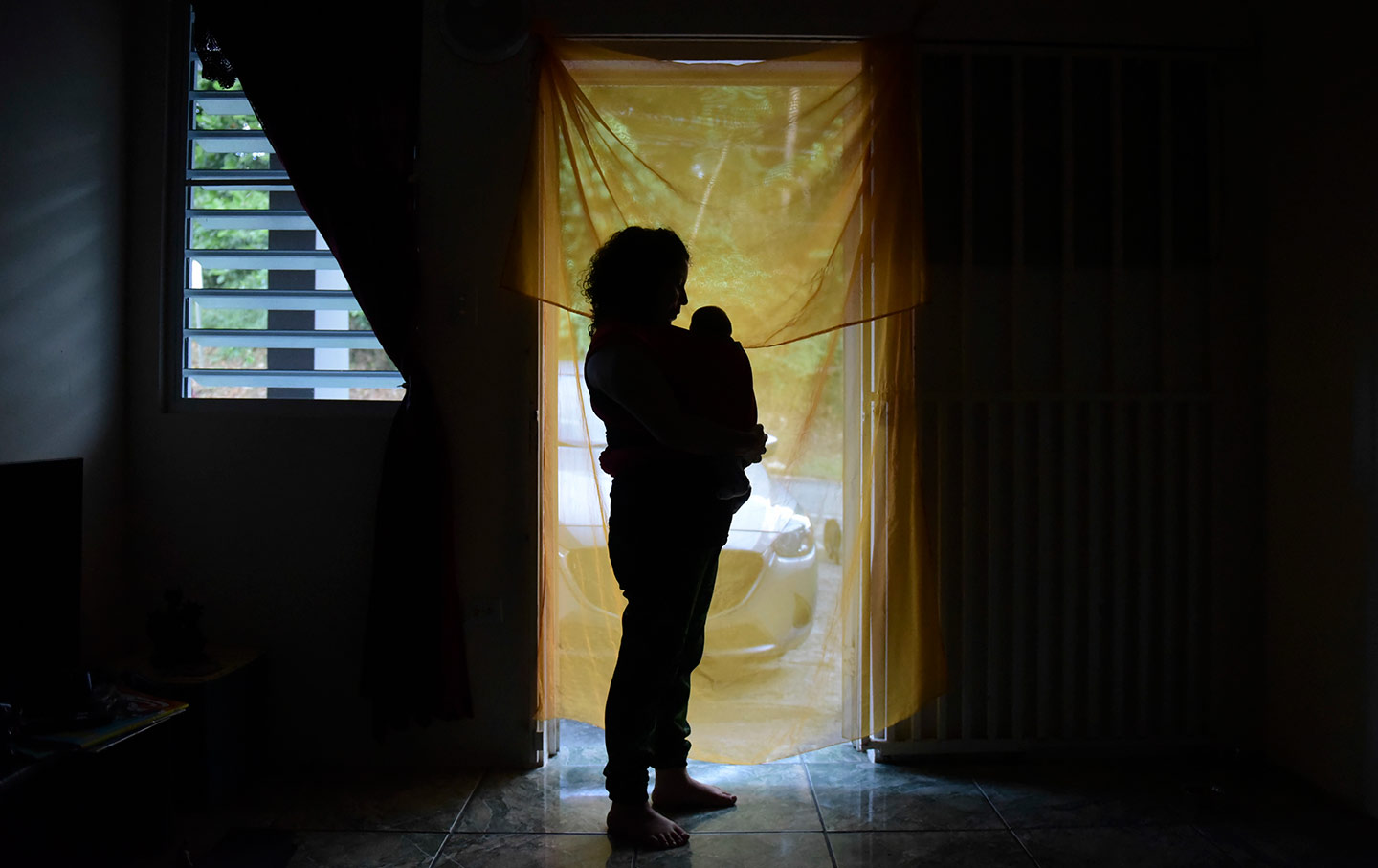 A woman in Bayamon, Puerto Rico, on December 16, 2016, holds her child who was affected by the Zika virus. (AP Photo / Carlos Giusti)

It’s a familiar, if tragic, pattern: A medical breakthrough is discovered at public expense, only to be licensed to a private corporation that earns billions of dollars by making it unaffordable for ordinary people.

The latest such giveaway involves a vaccine for the Zika virus, which can cause microcephaly, blindness, deafness, and calcification of the brain in children whose mothers were infected during pregnancy. Though the new vaccine is still being tested, it shows great promise. It was developed at the Walter Reed Army Institute for Research, and the Department of the Army funded its development.

“Consumers could pay twice: Once for the development of this vaccine through tax dollars and then to the company.”

Now the Army is planning to grant exclusive rights to this potentially groundbreaking medicine–along with as much as $173 million in funding from the Department of Health and Human Services—to the French pharmaceutical corporation Sanofi Pasteur. Sanofi manufactures a number of vaccines, but it’s also faced repeated allegations of overcharges and fraud. Should the vaccine prove effective, Sanofi would be free to charge whatever it wants for it in the United States. Ultimately, the vaccine could end up being unaffordable for those most vulnerable to Zika, and for cash-strapped states.

Activists and lawmakers have been resisting the giveaway since a nongovernmental organization called Knowledge Ecology International (KEI) first raised the alarm late last year. Its campaign gained new momentum last week when elected officials from Florida, including Senator Bill Nelson and nine members of the House of Representatives, wrote letters of objection to acting Army Secretary Robert Speer. The legislators called for public hearings before any licensing agreement is finalized. “Providing a single drugmaker exclusive control over a desperately needed vaccine could create an environment in which the vaccine is unaffordable to those who need it most,” Nelson wrote. “Given the considerable federal investment and the need for the vaccine, I believe it’s critical that the vaccine be available and accessible to the taxpayers who already invested in the research and development of the vaccine.”

Vermont Senator Bernie Sanders wrote the Army about the Zika vaccine in March, noting that “American consumers could pay twice: Once for the development of this vaccine through their tax dollars and then to the company, which would be allowed to charge any price that it wants for this drug if and when it is approved for marketing.” In an op-ed for The New York Times, Sanders asked President Trump to cancel the “bad deal,” noting that Sanofi’s CEO makes $4.5 million per year. Sanders correctly noted that Americans have given away drug patents before, only to wind up paying exorbitant prices for them.

So far the Army has waved away these concerns. KEI, Sanders, and others asked that, if the Army does grant an exclusive license to Sanofi, it include requirements that the vaccine be made available at an affordable price. In April, the Army rejected that request, arguing that it lacked the ability to enforce price controls. Instead, the Army requested that Sanofi voluntarily agree to set an affordable price for the vaccine. Sanofi refused.

Zika’s victims are the most helpless among us—newborn infants, especially those born into poverty. The virus is carried by mosquitoes and is most prevalent in southern latitudes. Within US borders, most Zika cases have occurred in Puerto Rico, followed by Louisiana and South Florida, typically among lower-income populations that live near swamps or other mosquito habitats. As was widely reported last year, the virus has been linked to a number of childhood birth defects, with between 5 and 10 percent of births to Zika-infected mothers showing abnormalities.

Zika is not dominating the headlines today the way it did last year—at least, not yet. Scientists are concerned that the virus could make a big comeback in the summer. Dr. Christine Curry, an obstetrician and assistant professor at the University of Miami, works with at-risk populations in South Florida that include Zika-infected expectant mothers. In an interview, Dr. Curry said that “we continue to see [Zika] transmission” in high-risk neighborhoods. While Curry’s team did not see locally transmitted cases until July of last year, there were already four confirmed cases of local transmission in South Florida by the final week of May this year. A total of 38 pregnant women in South Florida have already tested positive for Zika, although it’s not known where they had contracted the illness.

Sanofi charges Medicare more than $5,000 for a multiple-sclerosis drug that costs $745 in France.

Without a vaccine, Curry said, it’s difficult to limit the spread of the disease: prevention depends on mosquito avoidance, which generally amounts to staying indoors—not a practical solution for people without air conditioning or who work outdoors. Because Zika can be sexually transmitted, prevention also requires what Curry called “male compliance,” or condom use.

“When we look at who’s at greater risk,” said Curry, “it is women who are impoverished and are not English speakers.”

These at-risk women don’t tend to have lobbyists on Capitol Hill, and they don’t have the ability to offer high-paying jobs to former government officials. Sanofi has both. “Sanofi’s been all over Capitol Hill about this,” KEI Director Jamie Love told The Nation. Elias Zerhouni, Sanofi’s president of global research and development, is a former director of the National Institutes of Health. (In total, the drug industry employs more than 1,100 lobbyists.)

HHS has already granted the company $43 million for phase II clinical trials of the vaccine. (The government paid directly for Phase I trials, which are underway.) HHS plans to give the French corporation another $130 million to take the drug through its remaining trials and into development.

Drug companies “can hide behind the medical mission to justify really egregious policies.”

The deal’s defenders argue that Sanofi, as one of the world’s leading vaccine manufacturers, is well-equipped to develop the Zika vaccine. But Sanofi’s record also includes a number of controversies related to its pricing practices, from a $190 million fine to settle charges that it defrauded Medicare and other government programs, to a $109 million fine to settle charges that it illegally provided product kickbacks to doctors. In 2014, a whistle-blower alleged the company engaged in another kickback scheme and the destruction of legal evidence. KEI maintains a comprehensive list of Sanofi’s fraud fines, including the latest: a $19.9 million settlement, reached this April, for overcharging the Department of Veterans’Affairs.

Like other drug manufacturers, Sanofi has a record of charging Americans significantly more for a drug than it charges in other countries. Sanofi charges Medicare more than $5,000 for its multiple-sclerosis drug Aubagio, while only charging $745 for the same medication in France.

Sanofi’s defenders also argue that the company should be rewarded for taking on the financial risks of drug development. But this “opportunity cost” argument makes no sense to Dean Baker, an economist at the Center for Economic and Policy Research. Baker points out that Sanofi is already being paid for its work on the project. “That’s like having the government pay to build a house and then giving it to the contractor that built it,” Baker said. “They didn’t take a risk,” Baker added. “We did.”

For its part, the Army claims that it lacks the “means, authority, and expertise” to “define, implement, and enforce international vaccine prices,” according to a statement in response to KEI. Baker pointed out an easy way to solve this problem. “Pick three developed countries and promise you won’t charge more than three times the vaccine’s price there,” he said. “That, along with affordable pricing for developing countries, would solve it.”

The underlying problem is much bigger than Sanofi; It’s in the way the US government treats knowledge that has been developed at public expense. Too often, publicly funded discoveries lead to excessive private profit, while public access to new information and technologies is limited. Baker has written that the drug patent system in the United States carries enormous direct and indirect costs. With Americans facing a drug-cost crisis, a radical revamping of drug patents could provide lifesaving relief for millions.

KEI’s Jamie Love pointed out that under the Bayh-Dole Act of 1980, it is already illegal to grant exclusive rights to a federally owned invention unless the license holder agrees to make it available at reasonable pricing. But that provision has rarely, if ever, been enforced. “If this was land, or a gold mine, or an oil well, there would be more scrutiny around the economics,” said Love. “But they can hide behind the medical mission to justify really egregious policies.”