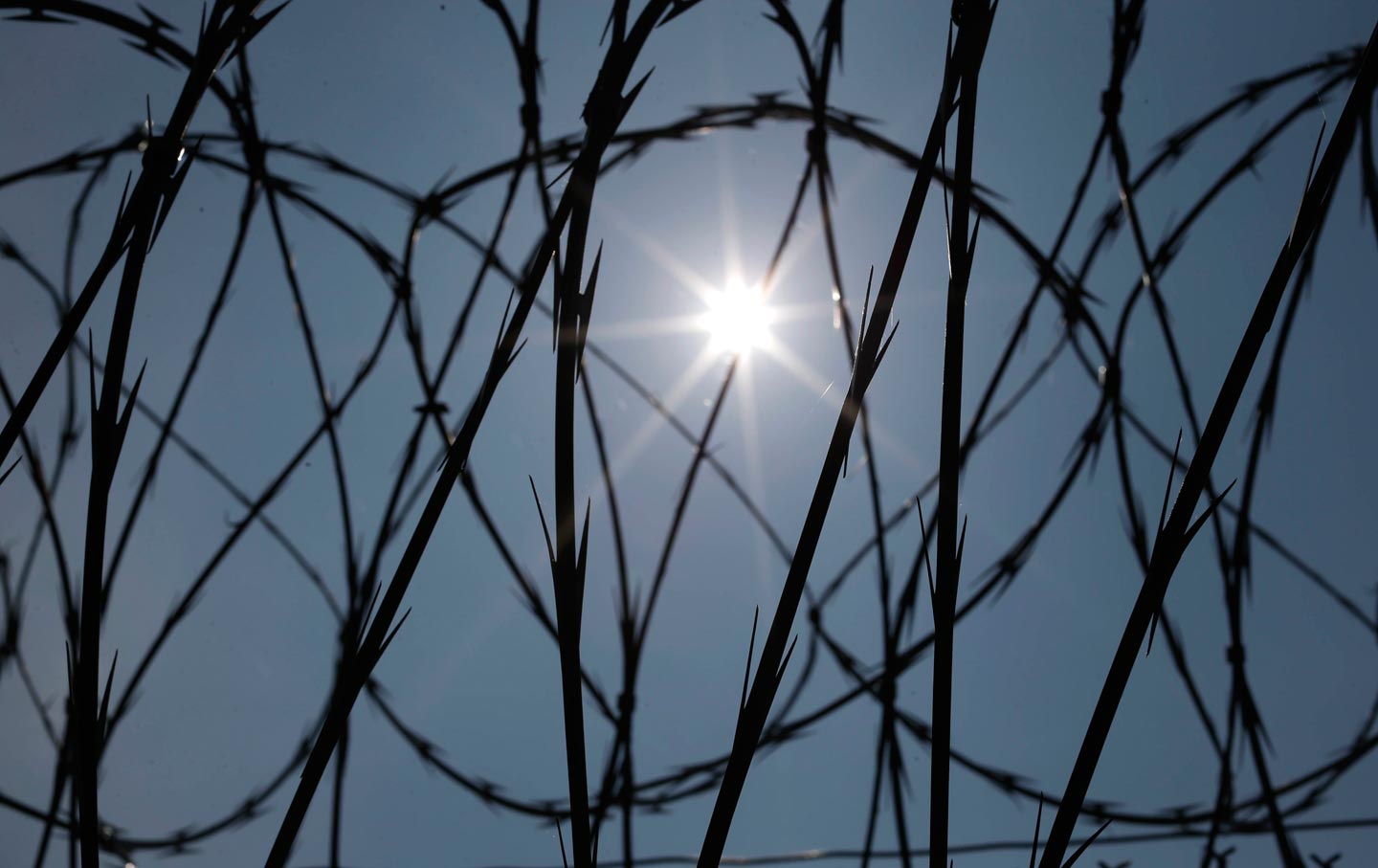 The sun shines through wire on a fence at a prison in Angola, Louisiana. (AP Photo / Gerald Herbert)

There’s a constitutional crisis in Louisiana. Although the Sixth Amendment guarantees the right to a defense lawyer to anyone accused of a crime, public defenders in New Orleans and several other parishes recently started to refuse serious felony cases. They simply don’t have enough people to handle the workload, which includes nearly 10,000 misdemeanor and 8,000 felony cases a year in New Orleans alone. Some offices are closing their doors completely, citing a state budget crisis and falling revenue from the traffic tickets that largely fund the public defense system. Some defendants only get to meet with a lawyer for a few minutes before critical court hearings. They’re the lucky ones: Others are stuck in jail, waiting for a lawyer to take their case.

Most major politicians are now talking about reforming the criminal justice system. Hillary Clinton devoted the first major speech of her presidential campaign to mass incarceration; Bernie Sanders has said that by the end of his first term the United States would no longer imprison more people than any other country in the world. Many Republicans are talking about sentencing reform, too, though there’s plenty of waffling, and the GOP candidates themselves don’t seem to know what to say. But almost no one in the national spotlight is proposing remedies for the serious crisis facing public defenders and the people who rely on them.

“These are the poorest people. They’re required to have protection, but it’s effectively being denied to them”—John Pfaff, Fordham University

The problem may be most acute in Louisiana, but it extends across the entire country. Just 1 percent of the $200 billion America spends each year on criminal justice goes toward public defenders, though most people who are charged with crimes can’t afford a lawyer on their own. Governments are spending about three times as much money trying to put people in jail as they are on keeping them out. In 2014, the Nashville public defender told a judge his office didn’t have the resources to handle death penalty cases; in 2013, a Florida court noted that the public defender’s workload had increased 29 percent, while his trial budget was cut by more than 12 percent. The American Civil Liberties Union has filed lawsuits in several states, including Louisiana, arguing that local governments have abdicated their constitutional responsibility to provide counsel.

Even when it’s available, free counsel isn’t often free. Most states levy some kind of fee for public defense. In Louisiana, it’s a $40 application fee, and another $45 if people plead or are found guilty. South Dakota charges defendants $92 an hour for representation, even if it turns out they should never have been arrested in the first place and are acquitted of the charges. Many people can’t afford to pay the bill, which usually ranges from hundreds to thousands of dollars—and that’s a crime, too. Tying funding for public defense to those fees, to traffic tickets, and to other fines makes it more difficult for low-income people to extricate themselves from the criminal justice system once they’re caught up in it. And it still leaves defense offices under-resourced.

“Sentencing laws are just a part of what ends up determining how many people are in prison”—Jesse Jannetta, the Urban Institute

So what’s the solution? While the ACLU is trying to hold state and local governments accountable in court, the federal government could invest more in public defense, suggests John Pfaff, who teaches criminal law at Fordham University. Pfaff points out that there’s actually very little the president can do to reduce mass incarceration, since most inmates are held in state prisons, and states have their own sentencing laws. (Bernie Sanders’s pledge to dramatically reduce the prison population in his first term has been treated skeptically for this reason.) But funding for public defense is one area where the federal government could make a big impact. For instance, Pfaff suggests, if the feds put $4 billion into public defense grants, it would triple budgets nationwide, yet still account for less than half of 1 percent of the nation’s total discretionary spending.

Given the scope of the problem and the potential for a federal fix, it’s strange that so little of the political debate about criminal justice reform covers indigent defense. “I’m particularly surprised Sanders hasn’t talked about it, because it fits very well with his class-based argument,” Pfaff said. “These are the poorest people…. They’re required to have protection, but it’s effectively being denied to them.” Advocating for billions of dollars to defend murderers and rapists might be politically unsavory; but some people charged with crimes aren’t guilty at all, and if the goal is to reduce the number of people in prison or the time they spend there, adequate representation is a basic first step. Pfaff did offer one caveat: A grant program might have to incorporate a mechanism to make sure states don’t take an influx of federal cash as an opportunity to reduce their own contributions to public defense even further.

“At a really basic level, the quality and the extent to which public defense is available to people can make a big difference in their outcomes,” said Jesse Jannetta, a senior research associate at the Urban Institute. He agrees with Pfaff that funding for indigent defense should be part of any serious criminal justice reform platform, particularly for the Democratic presidential candidates. “A lot of the focus ends up being on what the sentencing laws are, but that’s just a part of what ends up determining how many people are in prison,” he said. “Both campaigns have been concerned about criminal justice reform, and issues of poverty and inequality, and public defense really touches on both of those things.”

I reached out to the Clinton and Sanders campaigns on Wednesday to ask if increased federal funding for public defense was something the candidates would support. Neither responded by deadline, though I’ll add an update here if they do.