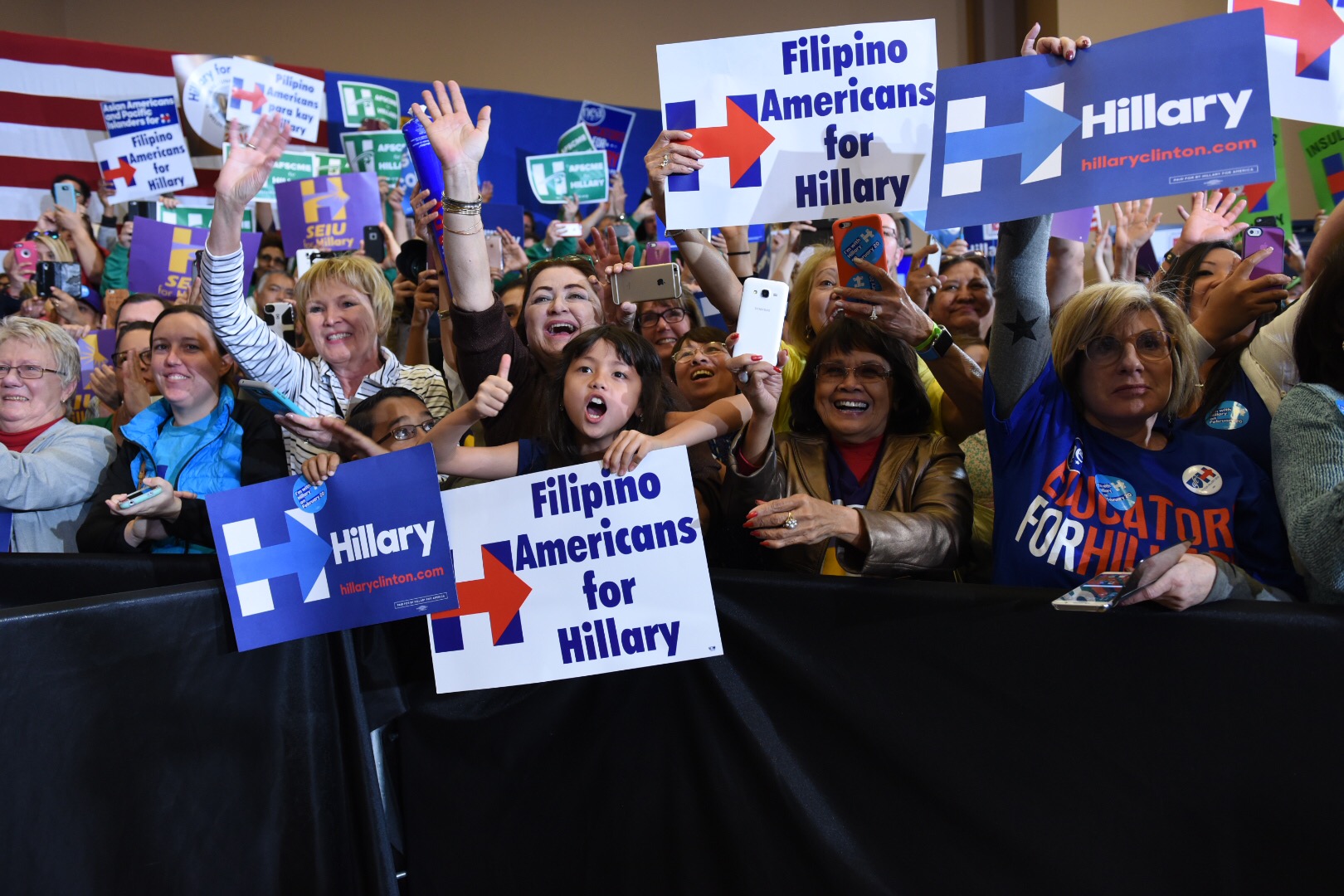 Kelly Kim’s one day off from work happened to fall on the same day as the Nevada Democratic Party’s presidential caucuses this past Saturday. “I really want to vote,” Kim told me the day before an estimated 80,000 Democrats throughout Nevada headed to weigh in on the 2016 presidential primaries. But Kim had no plans to caucus. We talked while she stood behind the counter at Mr. Tofu, a Korean restaurant on Spring Mountain Road in Las Vegas. “I work six days a week,” Kim said. “I have Saturday off, and then I go to church.”

Presidential candidates, volunteers, celebrities, and reporters have descended on Nevada over the past week to capture this stop on the presidential primary tour. Campaigns run on a grueling and adrenaline-driven schedule. It’s democracy, and it’s also entertainment. (It’s also a business.) And in Nevada, immigrant communities come into rare focus as part of it all. Here and elsewhere, “immigrant” is typically understood as synonymous with Latino.

Yet thanks to recent flows of migration, Asians are now the fastest-growing racial and ethnic group in the United States. So on Friday morning I walked up and down Spring Mountain Road, the main thoroughfare for the city’s Chinatown, and in the evening posted up outside Seafood City, a major Filipino supermarket, to try to answer a few questions for myself: What about Asian Americans? Do they plan to caucus? Are they hearing from presidential candidates? Where do they fit into all of this? I heard versions of Kelly Kim’s story over and over as I spoke with nearly two dozen people. If it wasn’t church, it was typically work, or just plain disinterest. Or it just hadn’t ever come up.

I was, she said, the first person who had ever asked her if she might take part in the electoral process.

Asians are 8.3 percent of the Nevada population (higher than their 5.4 percent share of the US population nationally) and 7.3 percent of Nevada’s electorate, according to the a voter engagement organization APIAVote. Between 2000 and 2010, the numbers of eligible Asian American and Pacific Islander voters in Nevada grew by 55 percent, much higher than the 35 percent growth of the statewide eligible voting population over the same time period. But by and large, it seems like the caucus flurry has floated right by many of the state’s Asian residents.

An obvious explanation is there’s also another way to look at the voting and population numbers. At 137,000 eligible Asian American and Pacific Islander voters in Nevada, they make up the smallest racial group here, smaller than the 166,000 eligible black voters, 328,000 eligible Latino voters, and 1.1 million eligible white voters. (Eligible voters are all those who are citizens and at least 18 years old.) Asians also historically have the lowest voter turnout rates. In 2012, 61.8 percent of the United States electorate cast a vote in the presidential election, but just 47.3 percent of the Asian electorate voted, which was a hair under the 48 percent of Latinos who cast votes, but far below the 64.1 percent of white voters who turned out and 66.2 percent of black voters who cast a ballot that year.

There’s a technical phrase political experts often use to refer to Asian Americans. They’re called low-propensity voters, or sometimes even sporadics—an adjective converted into a noun, a label, a profile. There are myriad reasons for this. Nearly three-quarters of Asian Americans in the United States were born outside the country. The largely first-generation immigrant population presents unique hurdles to voter participation. In Nevada, for instance, 70 percent of Asian Americans speak a non-English language at home, according to APIAVote. Many immigrate from countries where political activity of any kind came at great personal risk, or even count in their intimate family histories memories of political violence.

“Getting into the community is not easy,” acknowledges Vida Lin, president of the Asian Community Development Council in Las Vegas and a partner of APIAVote’s 2016 voter-engagement initiatives. She had been registering Nevada voters in the Asian-American community for months with events at UNLV and high schools and community centers. “They don’t want to talk about politics. We approached Thai temples, for example, and they say, ‘We don’t want to be political.’ And then we have to say, ‘We’re just educating.’”

Lin says she has to explain to many community leaders, “If you’re a US citizen, [voting] is not something you should be afraid of. The government here is not like where it is where you’re from, or where your parents are from.”

The Young Activists Who Remade the Democratic Party’s Immigration Politics

But in the calculation of transactional politics, the easy shorthand for all of this is often that Asian Americans aren’t worth the effort. Or, at the very least, campaigns are not currently equipped to serve the new America. Many political campaigns boast about having bilingual materials, in English and Spanish. But there are dozens of countries in Asia. In Nevada, the five largest Asian ethnicities—Filipinos, Chinese, Japanese, Koreans, and Indians—speak five distinct languages. An AAPI Post-Election Survey, sponsored by a group of Asian-American organizations, found that 69 percent of Asian Americans and 74 percent of Pacific Islanders were never contacted about the election in 2012.

Every election cycle offers a renewed opportunity to excite, and possibly even expand the electorate. Given these dismal statistics, opportunity seems wide open to capture the attention of Asians. In the last two elections Asians have overwhelmingly backed President Obama, but the 2012 AAPI Post-Election Survey found that 47 percent of Asian Americans are either Independent or say that they don’t think of their political identities by political party. “AAPIs are adding about 600,000 new voters with each presidential election cycle,” University of California, Berkeley, political scientist Taeku Lee told me.

Some campaigns are acknowledging this reality. The Clinton campaign held a week of Asian-American turnout activities in the week leading up to Saturday’s caucuses. One of the final big pushes was to send out volunteers, many of whom came to town from California, New York, and Washington, DC, to hit up shopping centers in their Hillary gear and urge people to turn out and caucus. (This kind of last-minute pitch was only possible because the Democratic caucuses allowed same-day registration.) Among them were Jean Quan, former mayor of Oakland, and Jason Pu, the mayor of San Gabriel in the Asian stronghold of Los Angeles’s San Gabriel Valley. (His favorite Chinese exhortation to would-be voters:Ni bu toupiao de hua, na ni jiu mei you shengyin. Or: If you don’t vote, then you don’t have a voice.)

“Even though hanging out in Chinatown might not be the most efficient way to talk to a voter, at least [Asian Americans] are seeing that we’re trying, and we’re not ignoring them,” said Lisa Changadveja, the AAPI outreach director for the Clinton campaign. To Clinton’s credit, the position was created in her 2007–08 presidential campaign, Changadveja said. She had decided to do fewer traditional get-out-to-caucus activities like phone-banking and instead sent volunteers and staffers to show their faces in Asian neighborhoods. “I’m trying to break the cycle,” Changadveja told me. “A lot of what I hear from the community is we don’t get involved because [campaigns] don’t reach out to us. And political campaigns say they don’t reach out because [Asians] don’t get involved in the political process.”

Bernie Sanders’ campaign does have a paid staffer, Phillip Kim, whose project is to reach out to Asian-American voters, according to Emilia Pablo, Nevada, communications director for the Sanders campaign. Kim declined a request to speak for this article. The Vermont senator’s supporters organized a “multi-ethnic coalition” luncheon six days before the caucuses with a group of black, Latino, and East and South Asian Sanders supporters. But even Sanders’s supporters acknowledge the campaign’s Asian-American voter engagement just meets the low bar of showing up. “I believe Senator Sanders could have done a little bit better outreach,” said Sanjay Sedera, a Sanders backer in Las Vegas and the founder of the Asian American Democratic Caucus in Nevada. “Those community outreaches are so important in this game.”

Still, Seung Il Sung, who’s lived in the United States for 36 years, said he liked Sanders. “I like Bernie. He talks well. I believe him, he has good ideas for everyone,” Sung said. He has worked as a cook at a hibachi restaurant, and his work has taken him on a veritable US tour over the past 36 years. He’s lived in Kentucky, Virginia, Georgia, Indiana, and even New York, where he drove a yellow cab for five years and would often ferry tourists who wanted to check out Trump Tower. “Trump is good, but not for president. The president has to take care of everyone, not just rich people,” he said.

In all his years in the United States, he’s never voted, and didn’t have time to caucus for Sanders last weekend because he works on Saturdays. But Sung was intent on proving that that didn’t mean he wasn’t American. He took out his passport, worn and curved from molding to his pocket, to show me emphatically that he was a citizen.

I also have met Asian Republicans. Sasha Rafael, a Filipina from Hawaii who came out to a Marco Rubio rally on a Sunday night all by herself, because she’s excited to caucus for him tonight. “I like the way he talks about the future, and he knows what it’s like to not have much money, and to have student debt,” which Rafael said she identified with deeply. Hector Hardin, who immigrated to this country in the 1970s after his stepfather married his mom and brought them here, was waffling between Ted Cruz and Marco Rubio, but said he was moved after hearing Cruz speak at a rally on Monday afternoon in Las Vegas.

Back out at the Asian supermarkets, I met several out-of-towners—Vegas runs on tourism, after all—and more often than that, I ran into people like Jomel Clarito, who’s not a citizen and so couldn’t participate. But he still was interested in the presidential race this year, and said he’s fond of Bernie Sanders, “because he doesn’t take campaign money from big corporations and I think he’s a very sincere person.”

Several people told me news that surprised me less and less the more I heard it: “I never vote.”But many people answered my first question with one of their own: “What’s a caucus?”

Asians did turn out to caucus on Saturday—the Democratic Party estimates that about 80,000 people turned out, and NBC entrance polls (the accuracy of which have since been hotly debated) estimated that Asians made up 4 percent of those who made it to caucus sites.

But Leilani Maea typified the response I got from people I chatted with outside Seafood City on Friday night. “I don’t know why,” she said, after telling me she wouldn’t be caucusing for either party. She’d never voted, she said, which is likely why she’d also never been contacted by any political party or political candidate. Maea is 32, Samoan and, like many Asian Americans in Las Vegas, moved to the city from Hawaii “because it’s cheaper here.”

Why wasn’t voting something that she considered for herself? “No, in our culture, it’s not, we don’t…,” she said, trailing off. I was, she said, the first person who had ever asked her if she might take part in the electoral process. “That’s why when you asked me, I said I don’t know, because I really don’t know why.”