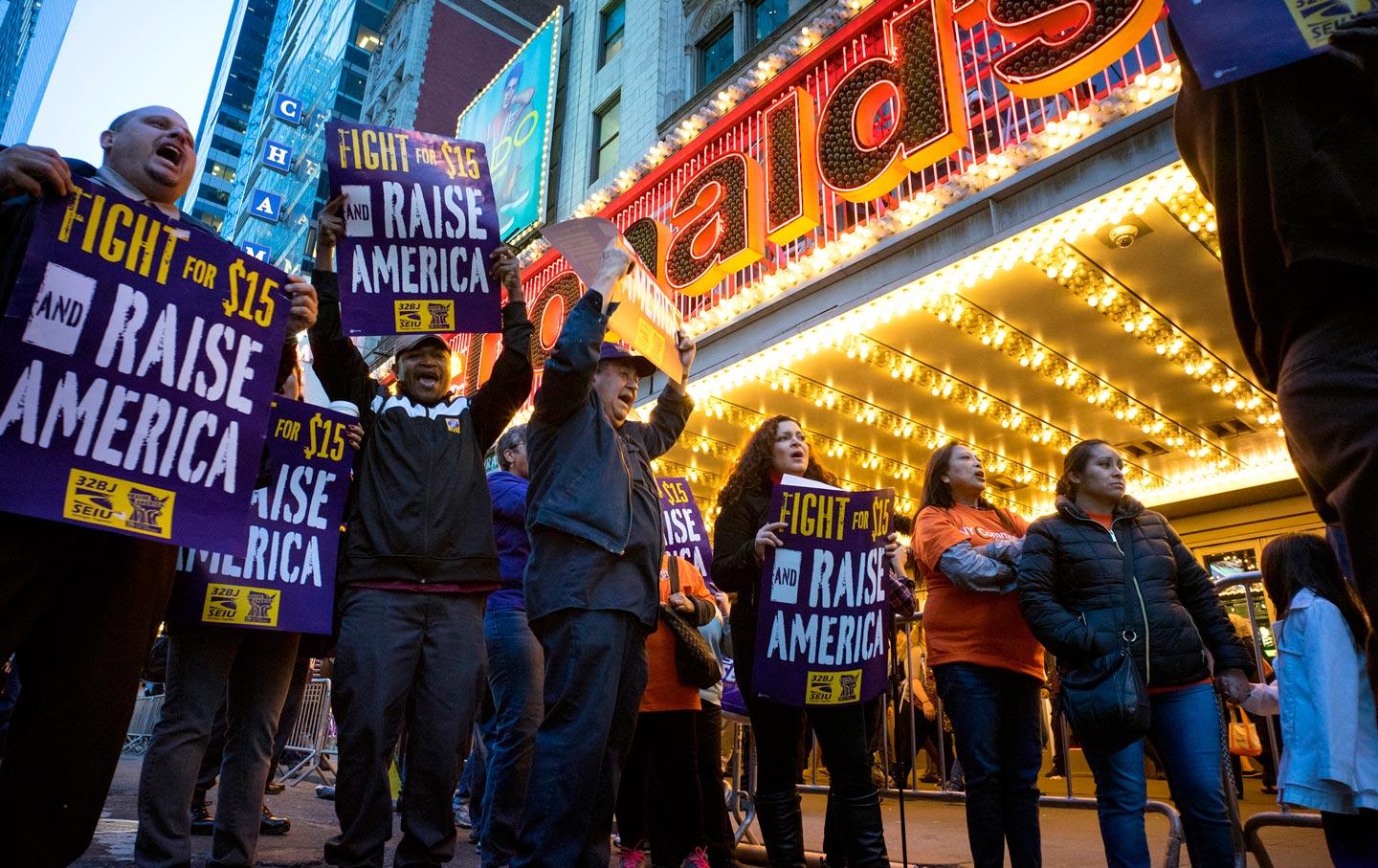 Fast food workers and union members call for a $15 minimum wage near a McDonald's restaurant in Times Square during a rally in New York. (AP Photo / Craig Ruttle )

New York City’s original Fight for 15 is becoming a fight for full time. After helping turn $15 an hour into the new normal by setting in motion a phased state minimum-wage hike to $15 by 2021, the fast food workers’ movement is taking on the second shift of its campaign to promote fair, decent work: a consistent, predictable schedule.

New York Mayor Bill De Blasio and City Council members have announced legislation designed to set standards for predictable scheduling at large fast-food outlets. The soon-to-be-introduced bill would, according to the mayor’s office, “Require fast food employers to schedule a majority of expected shifts and publicly post a workplace schedule two weeks in advance.” The bill would affect an estimated 65,000 fast food workers across the city. But notably it leaves out the massive retail and full-service restaurant sectors, which also employ huge swaths of the service workforce, particularly young people of color.

According to one nationwide study of early-career workers aged 26 to 32, “Half of retail workers report that they know their work schedule one week or less in advance, and half of janitors and housekeepers report that their employer completely controls the timing of their work.” Roughly 17 percent of workers operate on “volatile” schedules—often this practice is masked as “flexibility,” akin to the “flex time” of salaried professionals. But while some workers prefer ad hoc schedules, for many low-wage hourly service employees, irregular shifts typically mean bosses can change workers’ schedules erratically from day to day. (Most workers, according to an Economic Policy Institute analysis, say their bosses partially or wholly control their schedules.)

Erratic, “contingent” schedules can do as much damage to a worker’s quality of life as inadequate wages. About 70 percent of working mothers, and 80 percent of fathers, reported that in recent weeks their schedules had fluctuated on average 40 percent from their usual hours. The lack of standard work hours can profoundly disrupt family well-being, especially for low-income single parents who balance childcare and other household duties against constantly shifting schedules.

Newly introduced or enacted fair-workweek policies in several cities and one bill in Congress aim to force employers to post schedules in advance, and pay penalties to compensate last-minute changes, to help stabilize schedules and generally make workplaces more predictable and less miserable for workers.

San Francisco pioneered the “fair workweek” model with its Retail Workers Bill of Rights in 2015. The ordinance forces major retailers to give irregular and part-time workers more control over their hours with advanced notification and protections that give part-timers priority in hiring for full-time jobs.

Seattle just passed similar legislation for large retailers and full-service restaurants, which mandates that employers post schedules two weeks in advance and to pay overtime for hours lost from unexpected shift cancellations or rescheduling. The city that birthed Starbucks will now protect workers against the infamous “clopening,” by barring the scheduling of back-to-back shifts fewer than 10 hours apart.

For both Seattle and New York, enforcement will still be a major issue. Seattle plans to expand its Office of Labor Standards, for example, to a grand total of nine inspectors, and minimum-wage-enforcement cases currently might take at least six months to resolve.

In some ways, fair scheduling mandates may be harder to enforce than wage-and-hour laws, in that they aim at a more abstract principle of empowering workers to negotiate work time, rather than setting a single pay standard. Meanwhile, Seattle employers have protested about perceived hassle and confusion around the law’s protocols for allowing fellow staffers to fill in for absent workers, if bosses have to, for instance, notify all other staff via text message before letting a coworker pick up the extra hours.

Yet the service industry is changing on its own. Retailers like Gap and Victoria’s Secret have, at least as a matter of policy, dropped on-call scheduling—resulting in reforms covering more than 230,000 chain-store workers nationwide—spurred by an embarrassing investigation of retail labor practices across New York State led by Attorney General Eric Schneiderman. Retailers could see a business advantage in making jobs more livable for the low-wage young workers who, after all, could use their off-work hours to shop more at their stores.

“A lot of companies are trying to get ahead of the curve; they don’t want negative media attention,” says Carrie Gleason of the Center for Popular Democracy’s Fair Workweek Initiative. And as big brands become “increasingly aware that their employees’ work schedules are out of line with their values and their goals for their business…we are seeing a lot of employers start to look to see what they can do on their own and make improvements on schedules.”

Yet the “social responsibility” efforts of “high road” employers can’t be trusted without government oversight: Both Starbucks and Whole Foods have rolled out fair-scheduling initiatives, but have in recent months faced criticism over regressive labor practices—in the case of Starbucks, it was failing to comply with promised scheduling reforms; and with Whole Foods, cutting hundreds of jobs and downsizing hours to slash labor costs.

Though none of the new fair-workweek laws comprehensively tackle all bad scheduling practices, they’re building a framework for a new normal in the low-wage workplace. With the Fight for $15 and the Fair Workweek both converging on sectors that used to be known as bastions of dead-end jobs, we’re seeing the bottom line slowly move up the hierarchy of needs. The next step, though, is to organize, and unionize, to give workers real collective bargaining leverage over their wages and working conditions. Work-life balance comes by shifting the power balance on the job, so that workers have the final say over when they’re on call.