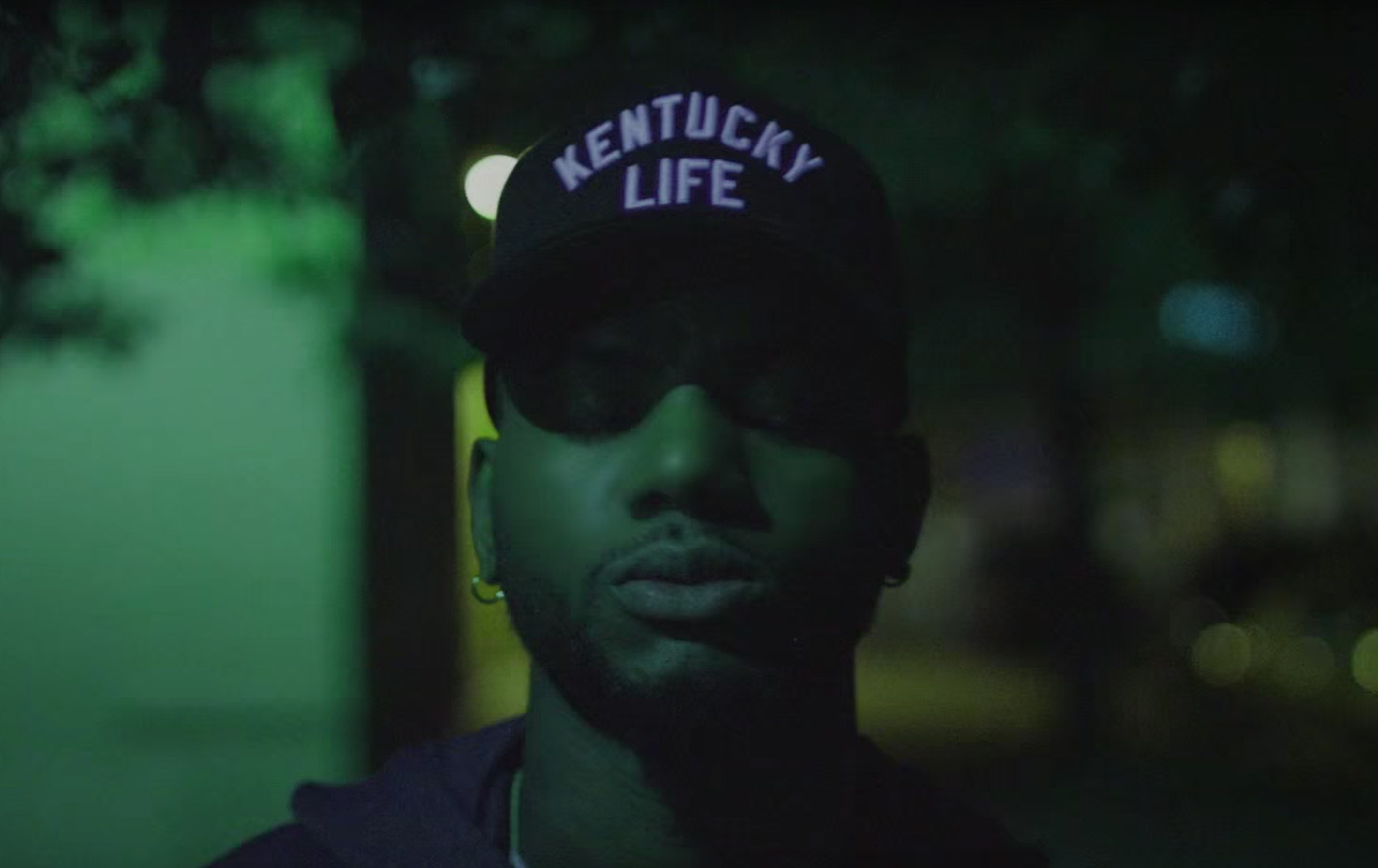 Around noon last Tuesday, Bryson Tiller, the 23-year-old R&B singer-songwriter and rapper, made an announcement on Instagram and Twitter: His debut album Trapsoul, released last October, had gone platinum in America. The news could only come as a shock. Trapsoul had sold a mere 22,000 copies in its first week, had gone un-reviewed by virtually all major music media publications, and had never risen above No. 8 on the weekly Billboard charts. It was already a surprise when Tiller announced, only five days prior, that his album had gone gold. To go from gold to platinum in such a brief interval seemed improbable. But, as the artist explained in his Instagram post, Trapsoul had actually gone gold a month ago. He had held off until immediately before his back-to-back appearances (both nights sold out) at Radio City Music Hall to share the news; after the second show, the Friday before, he learned that his album had sold a million copies. Tiller was overcome with awe and gratitude: “words cannot explain how i feel. thank you if you bought this, you changed my life.”

The fact of Trapsoul’s platinum status is particularly astonishing when one takes into account its content and its artist’s persona, neither of which seem, on first listen and glance, to be especially distinctive. It was true, of course, that the album features two strong singles, one of which, the woozy, muted, patiently pleading ballad “Don’t,” amassed tens of millions of listens on Soundcloud and whose music video on Youtube has by now been viewed over 105 million times. The runaway success of “Don’t” paved the way for Tiller to meet with industry veterans such as Timbaland and Drake, to sign a record deal with RCA, and to release Trapsoul, an album which blends details of the artist’s rise to prominence with elementary romantic plots, like those distilled by the single. A girl and a boy have recently split; a second boy, the singer, is poised to step in:

Be damned if I let him catch up;
It’s easy to see that you’re fed up:
I am on a whole ’nother level—
Girl, he only fucked you over cause you let him.
Fuck him, girl, I guess he didn’t know any better:
Girl, that man didn’t show any effort;
Do all I can just to show you you’re special,
Certain it’s your love that holds me together.

Much as the words never break from the classic set of R&B next-man-up tropes, Tiller’s singing voice never leaves the crooning range from which it begins. But within that range, his deft sense for the unexpected melodic turn sustains the listener’s interest in a romantic narrative, which, though simple, remains compelling when presented with candor and a minimum of fuss. “Don’t” is not a flashy song, but it glows with consistency. Its dim, stark, trembling synthesizers and sparse trap percussion subtly enhance the sense of not-quite-rushed urgency latent in Tiller’s lyrics and delivery, and what emerges is something distinctive precisely in its willful lack of distinction, its carefully calibrated universality.

Once one understands that what “Don’t” evokes is something like the Platonic ideal of a love that unshowily strives to be non-platonic, accounting for its huge success is easy. Postmodern romance comprises a series of minor characters and general situations seeking, respectively and mostly without success, major status and unique qualities; but by accepting the characters and situations as such and laying no more emphasis upon them than they can bear, Tiller’s art endows itself with an otherwise impossible realism, and popularity. In a world where the pressures are strong to view love either as a source of supreme significance or as an essentially meaningless phenomenon reducible to biology and economic class, there must be a silent, broad, and powerful demand to see love as small but definite, basic but irreducible, and Bryson Tiller satisfies that demand.

The primary reason for Trapsoul’s success is even simpler than its artist’s self-image: it’s a pretty great album.

It becomes clear, then, too, why Tiller’s work has mostly been neglected by the professional music press: Themselves minor characters in search of major status, music journalists are fatally allergic to an artist who accepts basicness, his own and that of his listeners, as such. Few enter music writing out of a desire to confess their average, uncool character; more do so out of a desire to become cool by associating with cool musicians, and Bryson Tiller, with his laconic demeanor, lowered expectations, and swagproof wardrobe, is completely indifferent not only to coolness, but to the desire to be cool.

It’s this that separates Tiller from Drake, his most obvious predecessor as a rap/R&B crossover artist. Though terminally uncool, Drake’s desire to be cool is tenacious and incorrigible: The interplay between his static introspection and frantic fame-seeking results in the hybrid, duplicitous character loved by millions of his fans as themselves. Tiller, however, is tautological, immutable, one-faced. In this sense, the musician that he most resembles is Drake’s fellow Torontonian and polar opposite The Weeknd (himself a collaborator on the recent remix of the Trapsoul track “Rambo”)—he is who he is, and no amount of cool-kid mockery directed at him can alter his self-image or his determination. “So give me all of you in exchange for me,” runs the hook on “Exchange,” Tiller’s other huge hit. Coming from Drake, the lyric would necessitate all sorts of fine-print parsing, since Drake tends to hold back some part of himself while enjoining full commitment from the other. But since it’s Tiller who’s singing, there’s no conundrum: There’s no need to specify “all of me” where “me” will suffice. He’s always all there.

The primary reason for Trapsoul’s success is even simpler than its artist’s self-image: It’s a pretty great album. Not great in the sense of a full-blown masterpiece, but great within self-imposed limitations, great at inhabiting itself. The consistent, and consistently pleasant, nocturnal ambiance and tone ensure that even though a few tracks would have trouble commanding attention as stand-alones, they function well as representatives of the album as a whole, as variations on trapsoulfulness, while the standout tracks (“Exchange,” “Don’t,” “Rambo,” and “Right My Wrongs”) can excel without disturbing the album’s general equilibrium. Thanks to this sturdy construction, Trapsoul can linger until appreciated more fully even in the absence of a forceful, idiosyncratic identity.

In this, Tiller’s music reflects not only its artist but also the city he represents: Despite being an attractive and prosperous city of over a million inhabitants, Tiller’s hometown of Louisville, Kentucky, maintains a national profile so low that he can credibly describe it on his album as “a place folks didn’t know exist.” A reluctance to stand out individually and a willingness to settle for the given are intrinsic to Louisville’s identity; consequently, the character of its citizens is difficult to distinguish from the average character of humanity at large. Tiller’s sonic inventiveness is clearly his own—the city’s complacency makes it difficult to for it to incubate new culture—but, as the normcore video for “Don’t,” shot in downtown Louisville, suggests, the aura of mundane anonymity that envelops his music comes naturally to the Derby City. It’s hard to imagine what’s next, musically, for Bryson Tiller, but as a Louisvillian I wouldn’t underestimate him. He’s already proven to the world what his city’s always known, but never felt the need to announce: It’s possible to be at once exceptional and exceptionally normal.