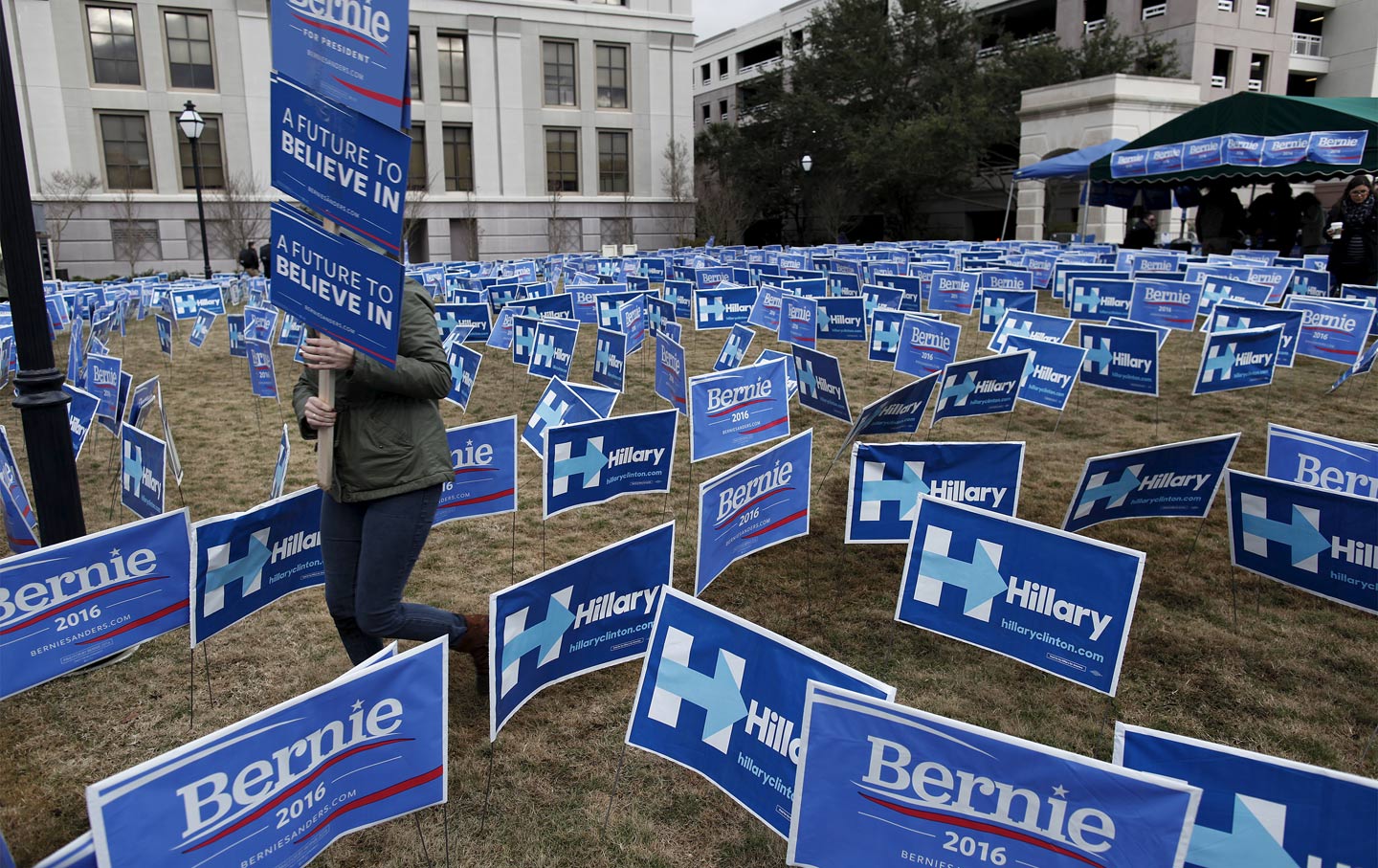 Despite this large margin, some of Bernie Sanders’s most strident supporters have attributed Clinton’s lead to foul play, alleging that the Democratic Party’s nominating rules cost Sanders the nomination and the Clinton campaign deliberately suppressed pro-Bernie votes. These claims, which have circulated widely online, are false. My colleague Joshua Holland, who supports Sanders, has extensively debunked many of these conspiracy theories, but I want to add more detail now that the primary is over. (I’ve been neutral throughout the race and do not endorse candidates.)

First off, the party’s rules were not the deciding factor. Sanders has rejected the idea that the nomination was “rigged” but has repeatedly criticized things like superdelegates and closed primaries, in which Independent and unaffiliated voters can’t participate. Here’s what he told Face the Nation in late May:

What has upset me, and what I think is—I wouldn’t use the word rigged, because we knew what the rules were—but what is really dumb is that you have closed primaries, like in New York state, where three million people who are Democrats or Republicans could not participate, where you have situation where over 400 superdelegates came on board Clinton’s campaign before anybody else was in the race, eight months before the first vote was cast.

That’s not rigged. I think it’s just a dumb process, which has certainly disadvantaged our campaign.

Clinton did do better than Sanders in closed primaries, winning 17 to his 9, but she also won more open primaries than he did, 13 to 10. Anti-democratic caucuses, where Sanders did very well, hurt Clinton far more than closed primaries hurt Sanders, writes Nate Cohn of The New York Times:

Sanders was generally hurt by closed primaries. By our estimates, he did about 3.5 points worse in such contests. But most states aren’t closed, so Mr. Sanders wasn’t hurt that badly over all. And Mrs. Clinton was hurt more by caucuses, where she did about 10 points worse, according to the same model.

If every contest in the country had been an open primary, Mrs. Clinton’s delegate lead would have grown. She would have lost ground in some of the contests, gained ground in the states with large numbers of anti-Obama registered Democrats (Oklahoma, West Virginia and Kentucky), and gained lots of ground in Western caucuses—where Mr. Sanders earned most of his big delegate hauls.

Over all, Mrs. Clinton would have about a 12-point lead in pledged delegates if every state had an open primary, according to our estimates.

Nor did superdelegates decide the nomination for Clinton. They gave her a symbolic early lead and momentum, but Clinton’s pledged delegate lead over Sanders was three times larger than Obama’s margin over Clinton in 2008, under the same rules. I’m in favor of abolishing superdelegates or curtailing their influence, but it’s worth remembering that they’ve followed the pledged-delegate winner in every presidential contest since their creation in 1984.

Secondly, the Clinton campaign did not intentionally try to suppress the votes of Sanders supporters. Some Sanders supporters point to Arizona, where there were five-hour lines in Phoenix’s Maricopa County during the March 22 primary, as a glaring example of malfeasance. But those lines occurred because Republican clerk Helen Purcell cut the number of polling places from 200 in 2012 to just 60 in 2016—a decision made possible by a 5-4 conservative majority on the Supreme Court gutting the Voting Rights Act and ruling that states like Arizona no longer had to approve their voting changes with the federal government.

Clinton strenuously criticized that decision and sued Arizona over the polling place closures, a lawsuit the Sanders campaign joined. Latino voters in Maricopa County, who were most affected by the long lines, strongly supported Clinton and she won the state overall by 15 points. Why would she disenfranchise her own supporters?

Voter-suppression accusations were also rampant after the New York primary. Sanders backers falsely accused Clinton of supporting a controversial purge of 125,000 registered voters in Brooklyn. Of the inactive voters purged in Brooklyn, only 8 percent of whom voted in 2012, 5 percent were 18 to 29 and 61 percent were black and Hispanic. While Sanders won young voters in New York by 30 points, Clinton won black voters by 50 points and Latino voters by 38 points, groups whose numbers were much more likely to be lessened by the purge, and carried Brooklyn by 20 points overall. The purge, to the extent that it mattered, hurt Clinton far more than Sanders. “We are very concerned about it because we believe we probably lost a lot of votes there,” said Clinton communications director Jennifer Palmieri.

The latest controversy surrounds California, where Hillary leads by 12 percent, 438,000 votes, but Sanders supporters are still claiming he can win the state based on 1.4 million unprocessed absentee and provisional ballots, even though Clinton has won 52 percent of the 800,000 votes counted after Election Day so far.

I could go on and on, but the point is that the outlandish claims fall apart when subjected to closer scrutiny.

“To the extent that the nomination was rigged in the sense that there was illegal activity going on that was directed by the Democratic Party or the Clinton campaign to sabotage Bernie Sanders’s chances, I’ve seen no credible evidence of that,” says law professor Rick Hasen of the University of California–Irvine.

There were problems in the primaries, without a doubt, and Sanders is right that the nominating process should be reformed. He’s called for open primaries, same-day registration, and abolishing superdelegates—worthwhile ideas that merit more discussion.

Yet not all of these reforms would benefit a future Bernie Sanders. Open primaries, for example, tend to produce more moderate candidates for local offices and can be an impediment to progressive insurgents like Sanders.

Moreover, it’s hypocritical for Sanders to call for more democracy in the Democratic Party and ignore the role of caucuses, which are the most antidemocratic part of the nominating process. Writes David Atkins in The Washington Monthly:

By their very nature, caucuses disenfranchise voters: they’re confusing, stressful and tiring to participate in, they have no voter secrecy or privacy, they require at least an hour of the voter’s time and often more at a very specific time of day, there is no ability to caucus by mail, etc. Caucuses also require chairs, secretaries, check-in volunteers and other officials who count votes, make tallies and determine eligibility–all of whom are are chosen by party leaders who can and do stack the deck for chosen establishment candidates in ways that range from unseemly to blatantly illegal.

The eight states with the lowest voter turnout in 2016 were all caucuses, according to political scientist Michael McDonald of the University of Florida, with an average turnout of 8.4 percent. Turnout was three times lower in caucuses than primaries in 2016. Yet Sanders has refrained from criticizing caucuses because he won 12 out of 18, compared to 28 of 38 primaries for Clinton.

“The caucus is the most voting suppressive system we have,” says Hasen. “The fact that this is off his list makes me question his integrity in making these reforms.”

The bigger danger facing Democrats are not their own rules, but new GOP voting restrictions aimed at depressing the vote among Democratic-constituencies. “What is happening is a sweeping effort to disempower and disenfranchise people of color, poor people and young people from one end of our country to the other,” Clinton said in a major speech on voting rights in June 2015, at the beginning of her campaign. Clinton emphasized this issue before Sanders, and lawyers affiliated with her campaign have filed lawsuits against GOP voting restrictions in key battleground states.

Both campaigns can unite on this issue. Clinton supporters should join Sanders in reforming the Democratic Party, while Sanders supporters should help Clinton combat obstacles to the ballot box like strict voter ID laws, cutbacks to early voting and restrictions on voter registration.

But there also needs to be an honest discussion separating fact from fiction. Crying wolf about rigged elections, like some Sanders supporters have done, undermines the legitimacy of documented cases of voter suppression resulting from GOP-passed laws in states like North Carolina, Texas, and Wisconsin, which pose a real and urgent threat to American democracy.