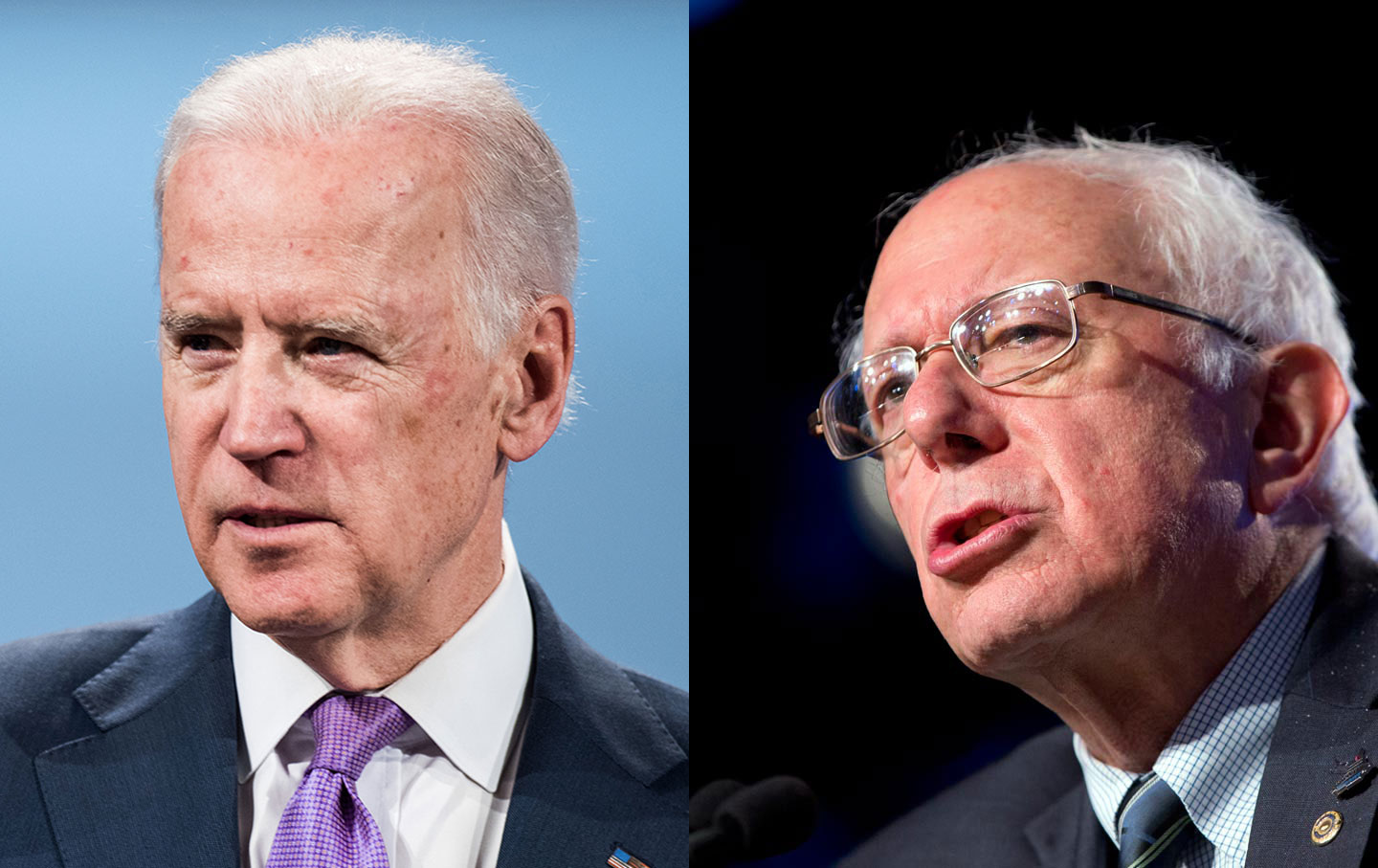 I couldn’t declare anyone the clear winner of last Tuesday’s Democratic debate, but I was sure of one thing: that the strong performance of Hillary Clinton and Senator Bernie Sanders (as well as former Maryland governor Martin O’Malley) should convince Vice President Joe Biden that there was no obvious opening for him to run for president.

Clinton, I wrote, “proved that the Democrats don’t need a (white) man on a white horse to come in and save them from her candidacy.” Meanwhile, “Sanders proved the party, and the nation, has a real choice–between a center-left reformer and a (peaceful) left-wing revolutionary.”

Apparently, I was wrong. If you believe reports from reputable mainstream media outlets this weekend, Biden was far less impressed by the debate than I was. Several trustworthy reporters say he’s still mulling a run. “Biden’s view of the debate,” Dan Balz wrote in The Washington Post, “confirmed that Clinton’s current competition is subpar at best.” CBS News adds that Biden “will not be bullied” by the Clinton campaign—chair John Podesta suggested last week it’s time for Biden to make a decision—and may not get in, if he does, until next month. On Monday morning, NBC’s Kristen Welker and CNBC’s John Harwood both reported that the vice president will decide in the next 48 hours.

So far pundits have depicted Biden’s potential candidacy as a verdict on Clinton’s campaign: that her e-mail woes have weakened her and rendered her less trustworthy, and that the country would be better served by, in Maureen Dowd’s damning words, “Biden values,” as opposed to Clinton values. But as the vice president keeps the summer rumors sizzling into the middle of the fall, increasingly his plans also look like a referendum on her opposition, particularly Bernie Sanders.

That’s despite the fact that Sanders has outperformed everyone’s expectations, including perhaps his own. He’s way ahead in New Hampshire, and just behind Clinton in Iowa. Polls show him defeating every leading Republican in a head-to-head race (though such polls aren’t worth much this far out). He’s drawing record-breaking crowds, and raising issues, like free college and Social Security expansion, that the campaign might have neglected without him. The CNN debate drew almost 16 million viewers, by far the most in Democratic debate history. There’s already a high intensity of interest in the Clinton-Sanders race.

Sanders will have a tougher time when he gets past the first two states and faces more diverse electorates, in Nevada, South Carolina, and beyond, but his support is still growing. He hasn’t hit a ceiling yet. I wouldn’t call him “subpar at best.”

Biden also potentially hurts Sanders because he’s going after one of his core constituencies: working-class white men, who Sanders believes can be won by his class-focused economic populism. Biden, very much a Democratic centrist for most of his political career, would seem to be offering that bloc more of a personal, cultural appeal, as an Irish Catholic who came from a family of modest means.

Personally, I’m skeptical that pitch will work for either man—the white working class has only grown colder to Democrats through the two terms of our first black president. And that makes Biden’s task tougher. One of his genuine political assets is that he’s had President Obama’s back these last tough seven years, which will help him cut into Clinton’s African-American support. But if he touts that relationship, and he should, I don’t see him becoming the hero of working-class whites. There’s no evidence that anyone can get much traction with that Republican-leaning group unless their populism is served with a dollop of racism or xenophobia, à la Trump.

Besides, Biden would be getting in late, at a time when there’s a grassroots uprising against the Democratic National Committee’s edict that there will only be six debates. At a time when party activists want more debates, Biden’s going to skip the first one, and make at most five? That could seem a little bit entitled.

At a time when party activists want more debates, Biden’s going to skip the first one, and make at most five?

The latest CNN/ORC poll shows the debate helped Clinton and Sanders—and may have hurt Biden. When asked who “won” the debate, voters say Clinton, 62-35. But Clinton and Sanders both saw their support grow after the contest, with Sanders getting a bigger bump. Biden, meanwhile, saw his CNN poll standing fall since September—from 22 to 18 percent. That’s consistent with the most recent NBC News/Wall Street Journal poll, which found Biden’s support had climbed from 15 to 20 percent between August and September—the period of peak Biden enthusiasm—but dropped back to 15 percent after the debate last week. Last month, 53 percent of Democrats polled by CNN said they wanted Biden to run; now 48 percent do.

There’s also a missing political and policy rationale for a Biden candidacy. He can’t really run to Clinton’s left; in the 110th Congress he was the 33rd-most-liberal senator; she was 11th. Sanders was first, and the junior senator from Illinois came in 23rd. Clinton may have represented Wall Street (an unfortunate phrasing Tuesday night), but he represented Delaware’s credit-card industry, and played a big role in legislation making it tougher for consumers to declare bankruptcy. Senator Elizabeth Warren called him out for it in her last book.

In a campaign that’s been shaped by the Black Lives Matter movement, Biden would have to defend his role in every major piece of anti-crime and anti-drug legislation of the 1990s, including the 1994 Violent Crime Control and Law Enforcement Act signed by President Clinton, which he wrote.

Finally, challenging the woman with the best chance to become president in American history, he’d have to answer for a decent but decidedly mixed record on women’s issues. He deserves plaudits for making the Violence Against Women Act the law of the land; he gets less love from feminist groups for supporting the Hyde Amendment, prohibiting Medicaid from paying for poor women’s abortions. He is also remembered with some bitterness for his role in confirming Clarence Thomas to the Supreme Court. He refused to allow witnesses who would have corroborated Anita Hill’s testimony, while letting Republican senators treat the feminist hero shabbily. Fair or not, if he jumps in this late, many feminists would feel he was treating another woman shabbily: Hillary Clinton.

So I’m not seeing a clear lane for Biden in the current race. Does he run to the right of both Clinton and Sanders? Like most center-left Democrats and the entire punditocracy, he may not think a democratic socialist can get elected if Sanders gets the nomination. And he may be right.

Still, the work Sanders is doing rehabilitating the idea of a strong role for government in making the economy work for everyone—which Democrats like Clinton and Biden ran away from for a while—and updating what is essentially New Deal liberalism is a great gift to a party that until now Sanders didn’t even belong to. He deserves better than Biden’s apparent disrespect.

But Biden deserves better than a last-minute, not-entirely-full-hearted presidential run. I’m guessing he knows that, and if I had to bet, I’d bet he stays out of the race. There’s one new Biden-watch development that backs me up: The Weekly Standard’s Bill Kristol says the vice president is definitely running. Wrong-Way Bill is so consistently mistaken in his political judgment that his prediction virtually guarantees Biden won’t enter the race.